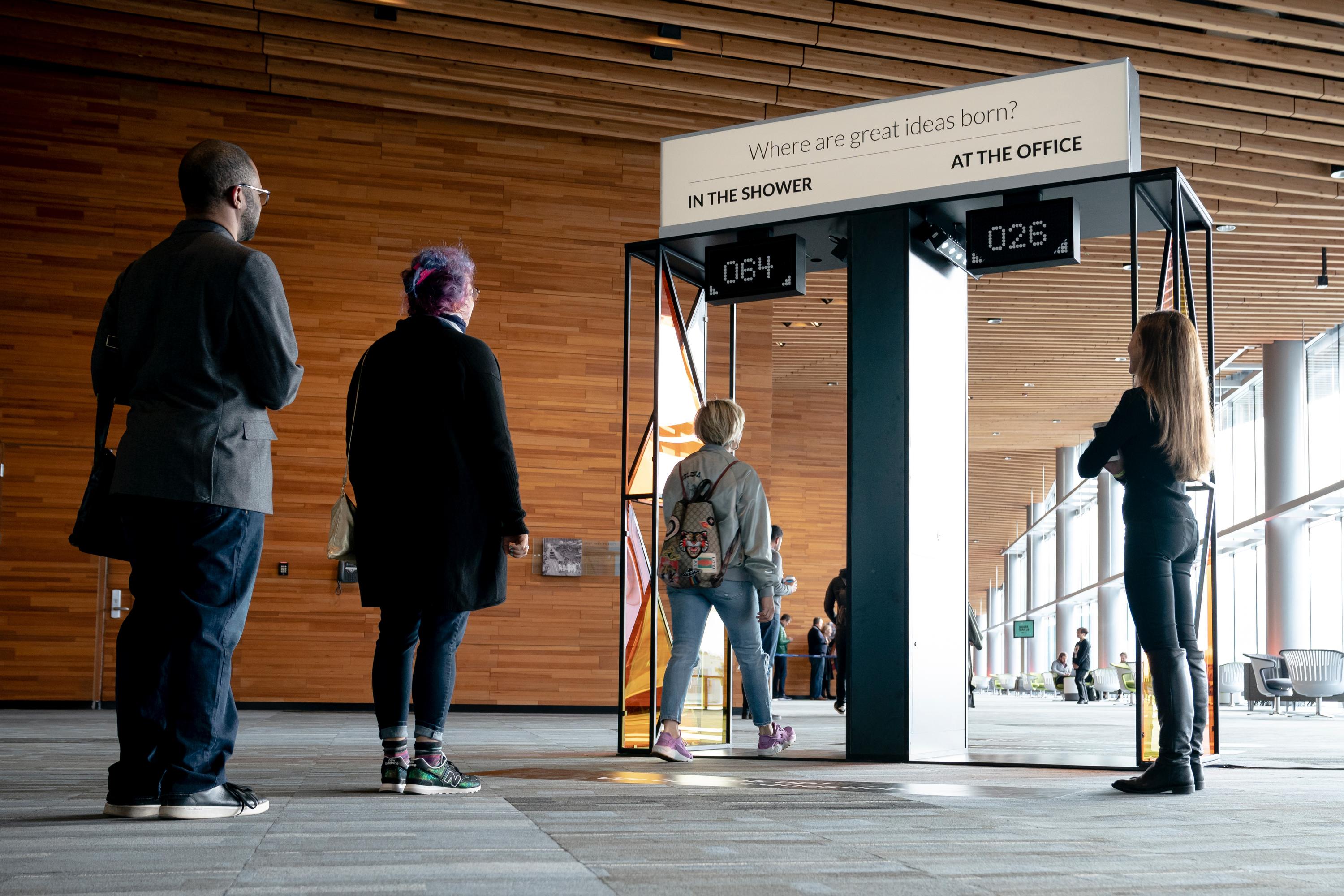 Attendees line up to vote on where great ideas are born: at the office, or in the shower? (Spoiler: see headline.) They’re interacting with a data portals installation, presented by Brightline Initiative at TED2019: Bigger Than Us. April 15–19, 2019, Vancouver, BC, Canada. Photo: Marla Aufmuth / TED

TED2019 opened in Vancouver on April 15 with the ambitious theme of “Bigger than us.” For the next five days, attendees were treated to a lively buffet of topics and speakers, with more than 70 talks, Q&As, performances, workshops and discovery sessions. And that was just the official schedule.

As any attendee can tell you, the conversations inspired by the events are just as smart and stimulating, and they’re a major draw for the people who return year after year to the conference. Brightline Initiative, a TED partner, wondered: Could they create an installation that could highlight this important aspect and provide a playful peek inside TEDsters’ minds?

Their answer to this question took shape in two dynamic pieces. Scattered around the Vancouver Convention Center (VCC) were three sets of data-collection portals. Each set consisted of a pair of side-by-side gates, similar to the security gates found at an airport. Every day, a different question was posted above each set of gates — three questions a day x 5 days meant 15 different questions were posed during the week.

The most popular question of the conference was “Where are great ideas born?” Choices: “in the shower” and “at the office.” Shower got 518 votes; office, 98. People voted by stepping up to the gate of their preferred answer, and as they walked through, a counter advanced — to the pleasing sound of plastic dots clicking — and a new total appeared atop the front of the gate.

The tallies from the three sets of portals were shown on a scoreboard at the Brightline main exhibit on the VCC’s ground floor. But those scores were just a garnish to the centerpiece of the space: a supernaturally glowing wall, or “moodbeam.” This eye-catching piece, and the gates too, were built by Domestic Data Streamers, a Barcelona-based data communication firm, in collaboration with Brightline Initiative.

Next to the moodbeam were clear plastic tiles in three colors, which conveyed three distinct feelings. Yellow meant “I’m optimistic”; orange, “I’m hopeful but we better start now”; and blue, “I’m concerned.” Attendees chose a tile that corresponded with how they felt, wrote on it the subject on their minds or the action they were taking on an issue, and slotted it into the backlit wall. 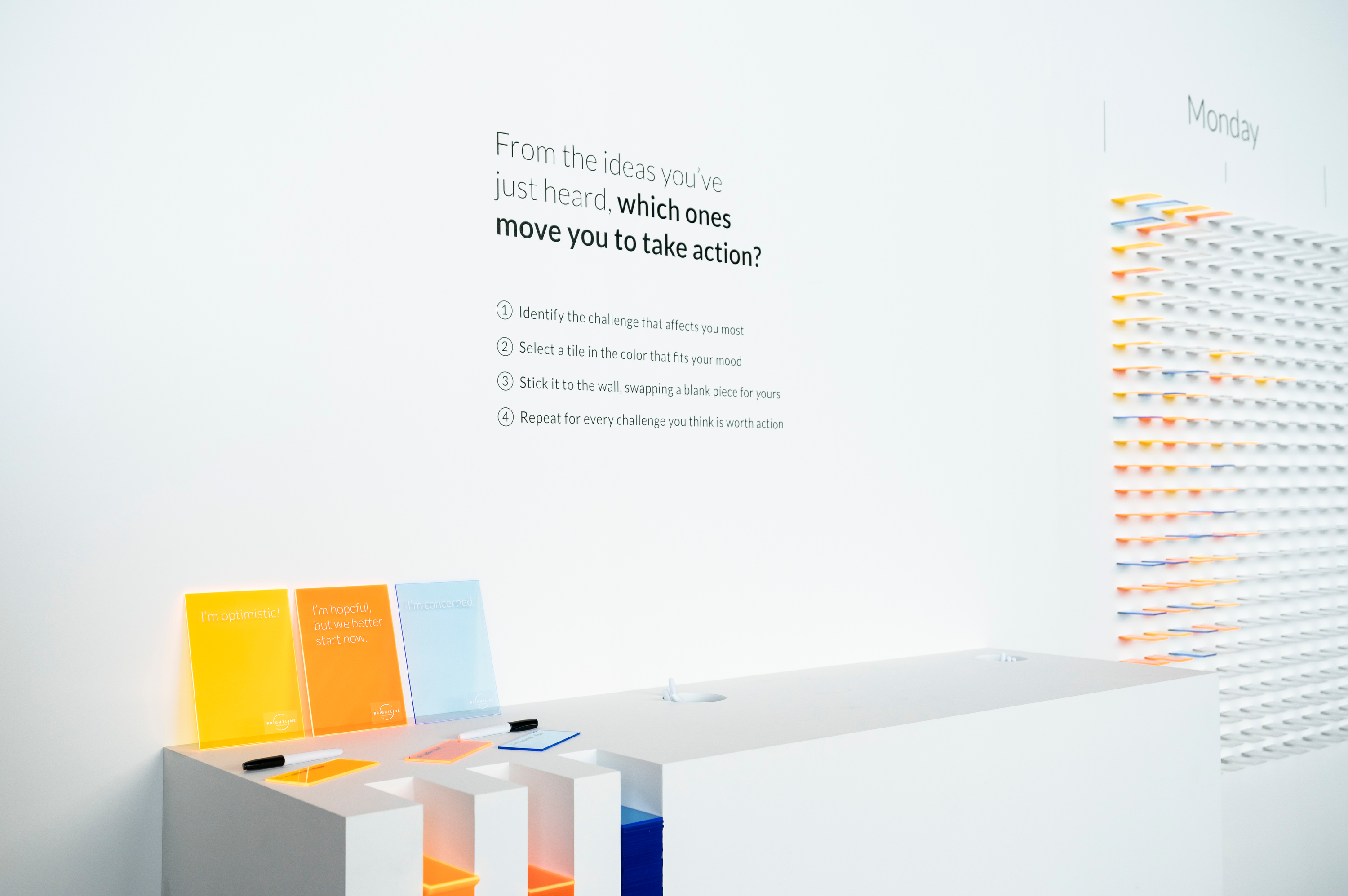 How the “moodbeam” works: pick an idea, decide if you’re optimistic, guardedly hopeful or pessimistic, and cast your vote. It’s part of a project from Domestic Data Streamers, presented by Brightline Initiative at TED2019: Bigger Than Us. April 15 – 19, 2019, Vancouver, BC, Canada. Photo: Dian Lofton / TED

The moodbeam was filled in from left to right over the course of the conference, serving as a giant mood ring for TED2019. By the end, “I’m optimistic” finished on top, with “I’m hopeful but we better start now” close behind and “I’m concerned” a bit further behind.

Qingqing Han, head of partnerships at Brightline, says, “The reason we’re doing the social space is to help people better reflect” — on the talks and speakers, on the gates’ questions, and on how people compare to other attendees. She adds, “It’s also a way to help people remind themselves that action is important,” something that is central to Brightline’s mission (“from thinking to doing” is one of the initiative’s taglines). 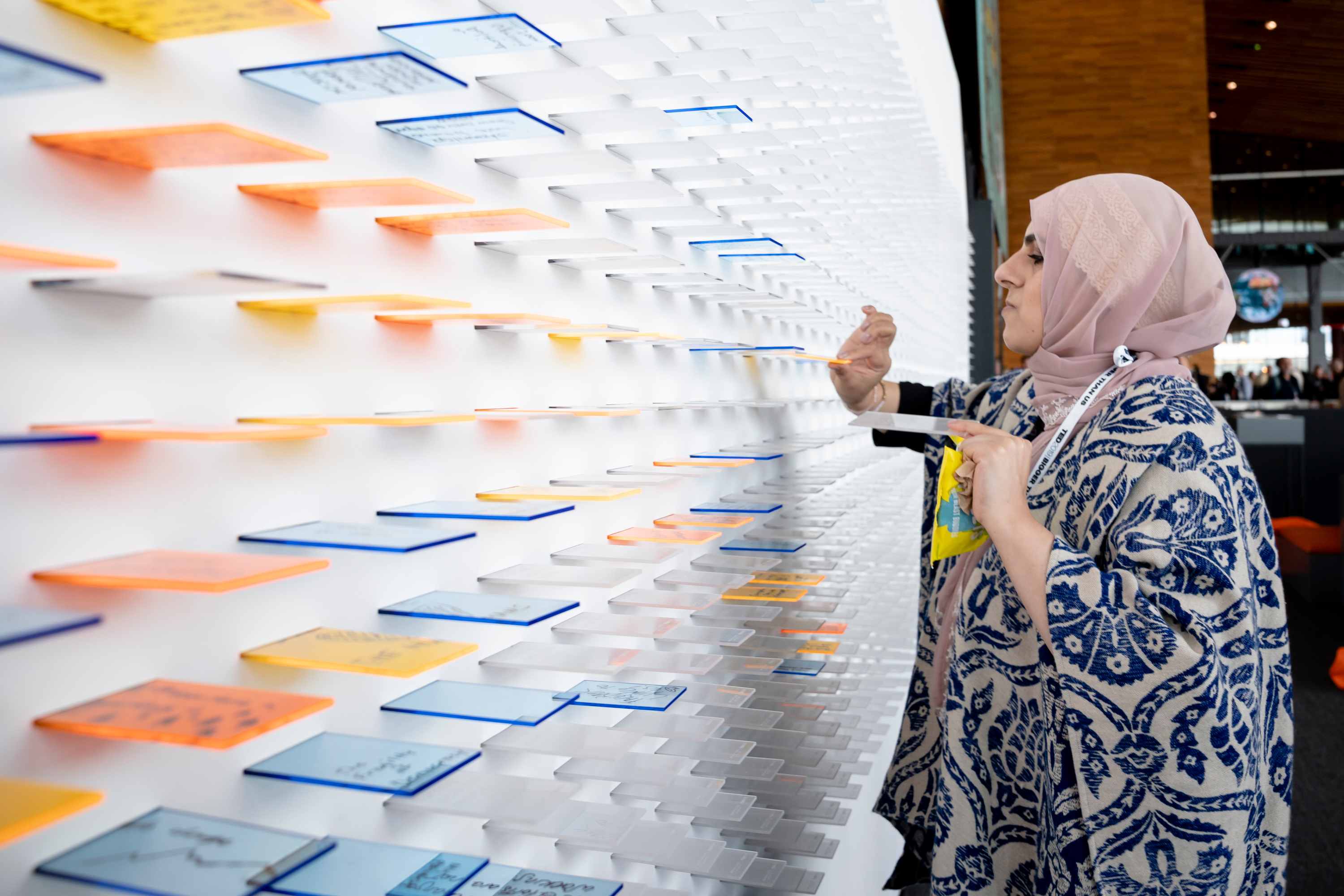 Attendee Fajir Amin adds an idea to the “moodbeam” installation at TED2019. The board was designed by Domestic Data Streamers and presented by Brightline Initiative at TED2019: Bigger Than Us. April 15–19, 2019, Vancouver, BC, Canada. Photo: Lawrence Sumulong / TED

“Our installation here is a dialogue with TED attendees,” says Miquel Santasusana, chief operations officer at Domestic Data Streamers. Their company first used the gates at a Spanish music festival, where concertgoers were given light-hearted choices such as Khaleesi or Jon Snow, Dumbledore or Gandalf. “You can’t stop anyone in the festival and ask them something; you have to do it in a way that is fast and simple,” he says. “So we decided to use the flows of the people from one stage to another.”

The TED Conference is another fast-moving crowd that flows among venues and spaces, and voting via the gates wouldn’t require extra time or effort from them. In fact, says Domestic Data Streamers CEO Pau Garcia (watch his TEDxBarcelona talk), “I’ve seen people here going through the gates in a circle because they didn’t want to decide — so they chose both of them.” As a result, “this shouldn’t be taken as statistically significant information to analyze TEDsters,” says Santasusana. “At the end, it’s not the numbers that matter; it’s about starting a discussion.”

Here are the highly unscientific results to the five most-answered gates questions (after the shower vs. office one); they’re listed in ascending order of popularity: 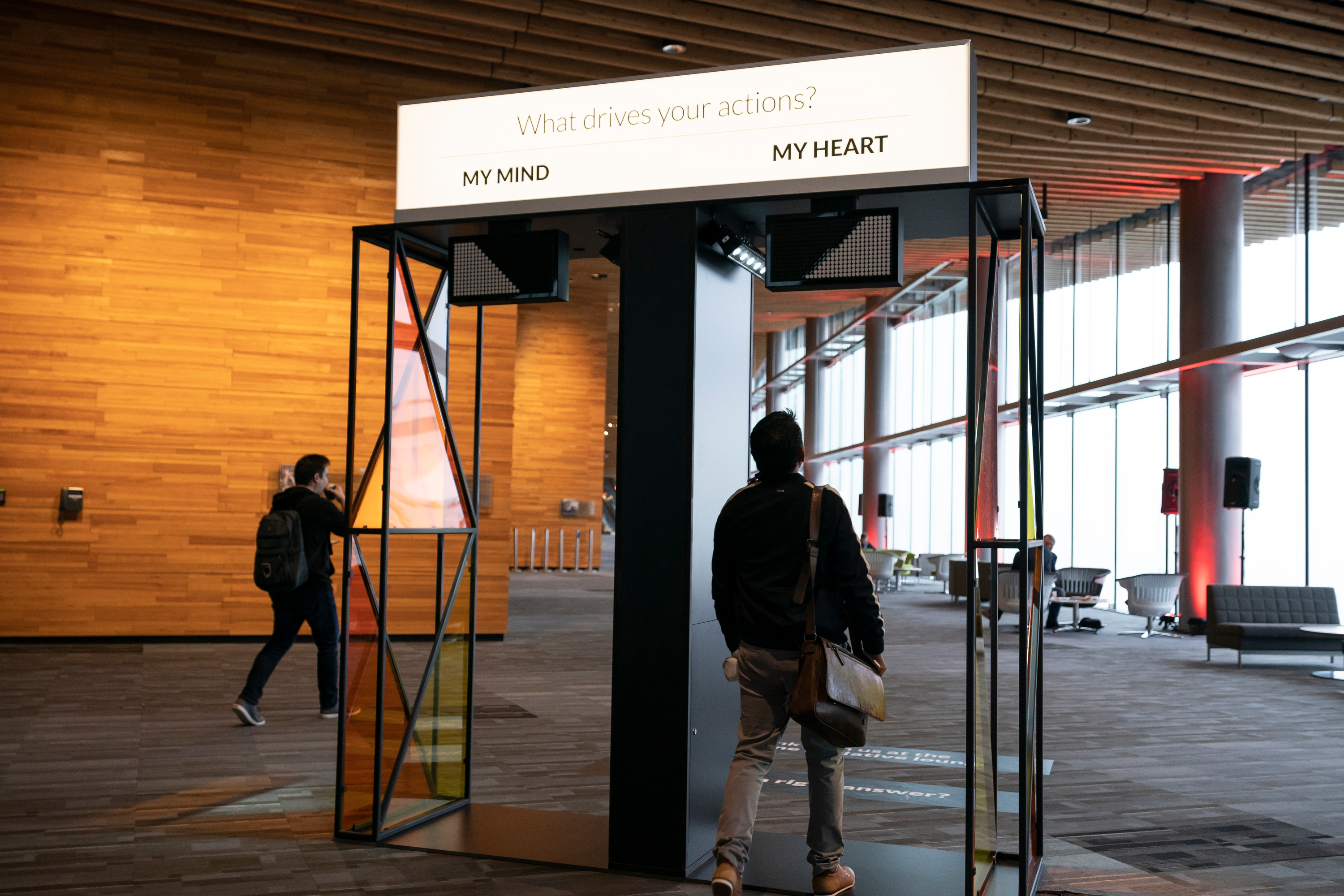 Casting a decisive vote for heart-driven decisionmaking, an attendee steps through a data Portal, presented by Brightline Initiative at TED2019, Brightline at TED2019: Bigger Than Us. April 15–19, 2019, Vancouver, BC, Canada. Photo: Dian Lofton / TED