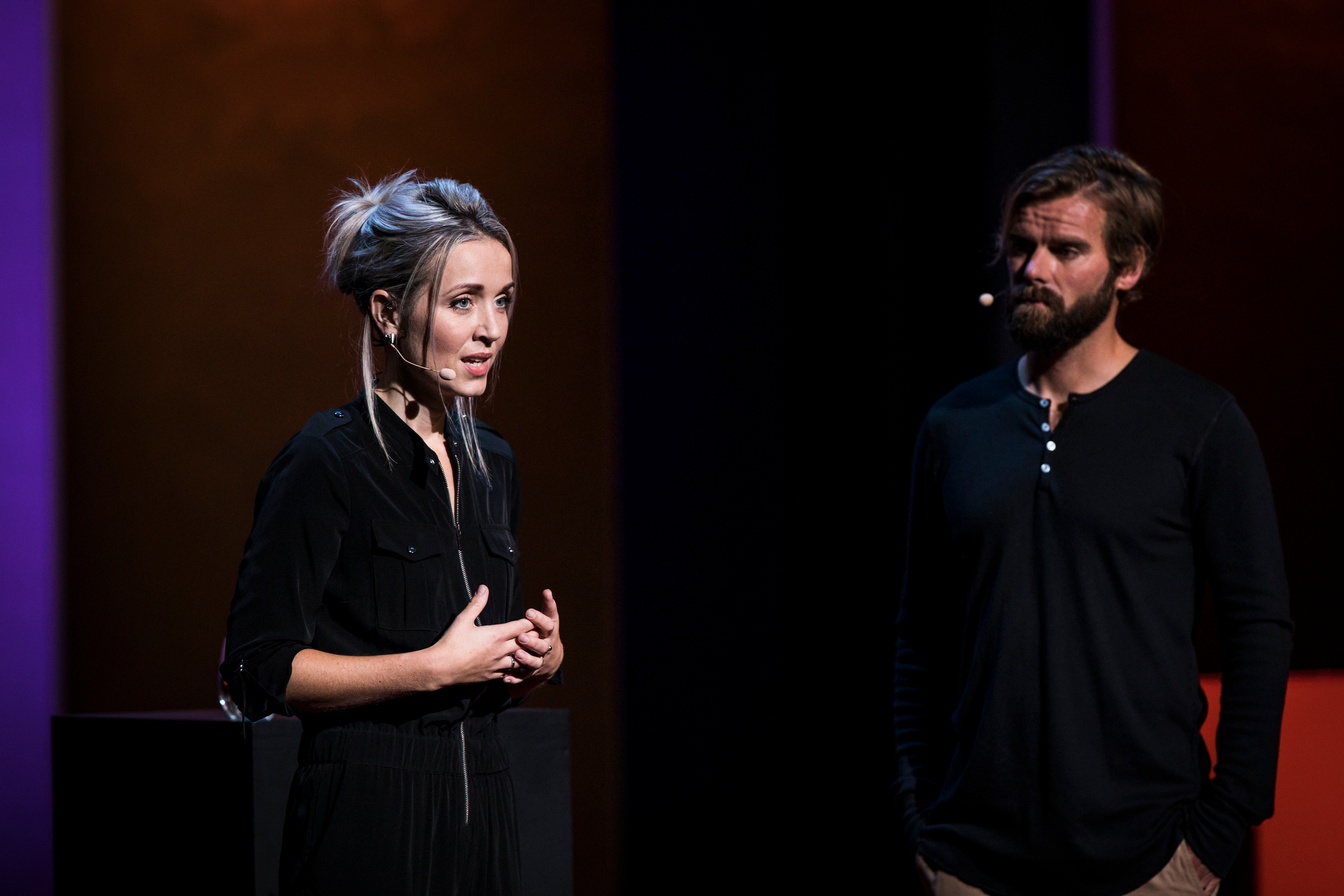 When we started TEDWomen in 2010, we felt strongly that we wanted to include a series of talks we called “Duets” in which we would forego the traditional TED Talk model and present pairs of speakers instead of solo ones.

There is no question that the Duets sessions are often among the most popular and provocative.

One such talk, given last year in San Francisco, was one that we knew was going to be controversial from the outset because it was going to take us into entirely new territory… not only at TEDWomen but also online as men and women in every part of the world are struggling to come to terms with the global epidemic of sexual violence.

In this groundbreaking duet TED Talk, we heard the story of an extraordinary partnership that developed between a victim of sexual violence and her perpetrator — as they each searched for a path to understanding and forgiveness.

I learned about Thordis Elva from an Icelandic friend who told me that a friend of hers had reconnected, after many years, with her high school boyfriend who had raped her. Not to pursue the romance which had, of course, ended immediately, but to try to make sense of what had happened so that she could stop the blaming and shaming that threatened to take over her life.

As my friend recounted the plan Thordis had come up with to begin an online dialogue with Tom (who had been an exchange student from Australia), I could begin to see the potential for a TED Talk that would reveal a new possibility for millions of victims of sexual violence. I started a phone dialogue, first with Thordis, over a period of two years, as the conversation with Tom was underway. I’d hear from her from time to time about the insights she was gaining as well as the emotional rollercoaster of their reconnection, which eventually led them to meet in person and complete a healing process that transformed both of their lives.

They were ready to share their story, knowing that the impact would be huge but somewhat unpredictable. This was new territory — a rapist standing on a stage next to the woman he raped, telling their story of reconciliation and forgiveness together, to the world.

It was a tough road getting them ready for that moment. We sent many drafts of their TED Talk back and forth, trying to condense 20 years of their lives into 16 minutes. Many times, it wasn’t clear if they and their families (both had life partners) would go forward, but the more they wrote and talked and put their discoveries about themselves and about the nature of sexual crimes, the more they felt compelled to share it, hoping that it might provide a new path to healing for others.

I was almost as nervous as they were when they took the stage in San Francisco, knowing that it was potentially explosive to have a confessed perpetrator of a sexual crime standing in front of an audience who most certainly included many victims of similar violence. One of every three women experiences sexual violence in her lifetime.

The audience was quiet and leaned into the experience of hearing this unique story told with authenticity and conviction. They stood to applaud when the talk ended and both Thordis and Tom broke into tears backstage.

Here’s the talk if you haven’t seen it:

TEDWomen was Thordis and Tom’s first experience talking publicly together about what had happened between them. Since delivering it last October, a lot has happened. They wrote a book based on their talk — their journey from violence to understanding to forgiveness — and the video has been viewed over 3.2 million times on the TED website.

I caught up with them over email earlier this month. After releasing their book, South of Forgiveness, this spring, they spent two months traveling to Australia, Britain, Japan, Sweden, Iceland, the USA, Germany and Poland to promote it. They’ve been interviewed on the BBC, CBS, and NPR, and featured in Cosmopolitan, Marie Claire, Teen Vogue, The London Times, the Evening Standard, and Spiegel Online, to name just a few.

Thordis tells me that the book has received many favorable reviews, including one review in the UK Sunday Times she particularly appreciated that said: “Hats off to Elva and Stranger for a brave journey that might well change lives.”

“Public speaking has been a major part of what I do for the past decade and in the months to come, I’ll be speaking to a wide range of people — including police officers, shelter workers and politicians — about sexual violence, breaking the silence that surrounds it, healing from it and lifting the shame from survivors.

I’ve also been tending to my other passion, which is battling online abuse, including the non-consensual distribution of nude photos.”

Their talk has provoked strong reactions — for instance, after a petition drive this spring, a scheduled talk in London was cancelled, and instead became a more intimate facilitated conversation. As their journey shows, we are still learning how to have this discussion.

This fall, Thordis is releasing a short film for teenagers, “reminding them of the importance of consent in any type of intimate or sexual situation, whether it is online or offline.”

“One woman shared with me her truth of being a survivor of rape. She must have had to steel herself to come up to me in person, but her powerful words “keep talking” have stayed with me. A face to face conversation with a man whose daughter was gang raped left me speechless, as did his verbalized support for the intention of our TED talk and book.”

I am grateful that they were willing to share their story with us at TEDWomen. As Thordis says, it’s important to get these stories out into the open and to give rape survivors the space to talk about their experiences. Being open to talking honestly about our global rape culture can be a big step towards changing the dynamics that are perpetuating it. In the United States alone, RAINN estimates there are over 300,000 victims of rape and sexual assault each year. Of those, 63% go unreported and only 0.6% of rapists are incarcerated. The statute of limitations had passed for Thordis to bring charges against Tom, but as she makes clear, her pupose was not to punish him but to try to understand him and the culture that contributed to his actions against her.

Tom noted that “very few people who have spoken to me about the TED talk haven’t, in some way, been personally affected by a man’s sexual violence. This reality has underlined to me the collective encumbrance we share, as men, to vocally address this subject, grow understandings, and promote new identities and stories that lift up the healthy and self-connected elements of manhood.”

He says he’s worked with many groups working on the issue to find the right language to engage other men in reflective conversations about masculinity and perceptions of manhood. “Such conversations,” he says, “are where I’m taking the lessons, knowledge and experiences I have gained, to build future collaborations and simply to continue the listening and talking.”

They hope their story will change lives and by all accounts, it already has. Thordis says, “I continually get messages from people all over the world who have found hope, inspiration and healing in our TED talk. It continues to be a humbling, life-changing experience.”

This year, TEDWomen will be held November 1–3 in New Orleans. The theme is Bridges: We build them, we cross them, and sometimes we even burn them. We’ll explore the many aspects of this year’s theme through curated TED Talks, including a session of memorable pairings to be announced earlySeptember. The hosts of this year’s duet session will be a married couple who have just completed two years of interviews with partners and they will add their insights, too, about how good partnerships come together and stay together…something they call “plus wonder’ and that’s how we think of our Duet sessions—it’s a plus-one TEDTalk.

Registration for TEDWomen 2017 is open, so if you haven’t registered yet, click this link and apply today — space is limited and I don’t want you to miss out.