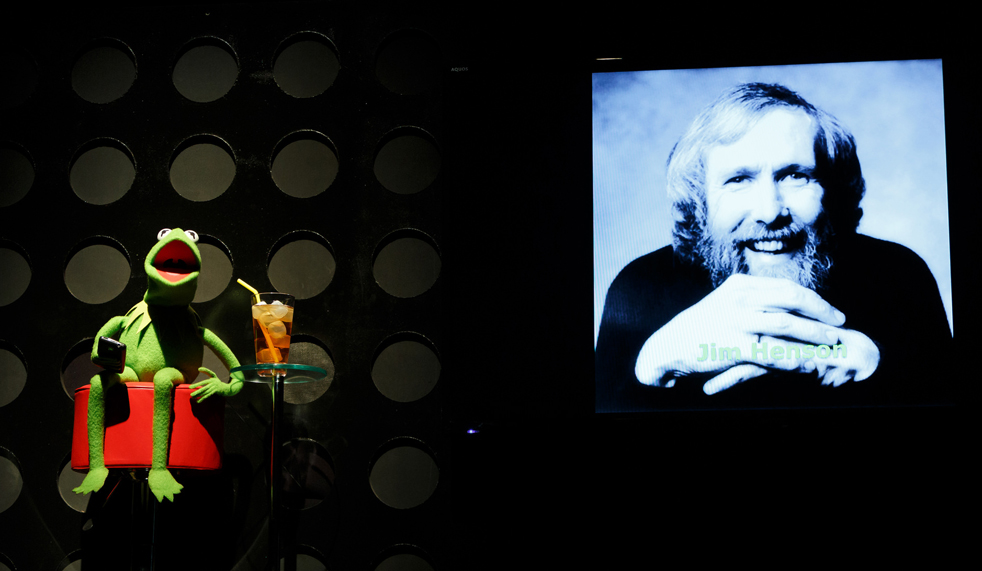 Kermit the Frog shared inspirational words on creativity at the first TEDxJackson. Why? Because creator Jim Henson was from this part of Mississippi. Photo: Tate Nations/TEDxJackson

“It is great to be back in Mississippi — yes it is,” said Kermit the Frog on the TEDxJackson stage in 2014. “I have deep roots here.”

The Muppet was alluding to the fact that his creator, Jim Henson, was from the area. Kermit spoke about his humble southern upbringing in a swamp not too far from Jackson’s Capri Theater, where the event was held. Midway through his talk, Kermit even paused to take a long sip of sweet iced tea.

TEDxJackson might be a newcomer to the TEDx fold, but the event represented an important milestone for the TEDx program — Mississippi was the last state in the United States to hold a TEDx event.

“Jackson is a diverse, cosmopolitan capital full of soulful, friendly people,” says TEDxJackson organizer David Pharr, who oversaw an event staged around the theme “Fertile Ground.” Jacksonians, he adds, are working to “rebuild the city’s aging infrastructure, improve education, and address the challenges of generational poverty.” And an overwhelmingly positive response now has the team planning the next event. “We confirmed that Jackson is hungry for an event the brings together people from all walks of life to celebrate great ideas,” says Pharr.

Since 2009, TEDx events have been held in many major cities in the American South — from Charleston, South Carolina to Birmingham, Alabama. Here’s a look at a few others:

TEDxNashville organizer Bob Bradley describes Nashville as a city that’s “3-D Technicolor in 4/4 time.” Bradley and his team recently wrapped their sixth annual event, tapping into the city’s “evolving tribe of creative class thought leaders” that makes it easy to find interesting speakers and talented team members. Over the years, the event has grown from a small get-together in the auditorium of the Montgomery Bell Academy, the school that inspired Dead Poets Society, to a packed house at the James K. Polk Theater, which seats more than a thousand. This year’s highlights included a talk about domestic violence by the CEO of the YWCA and one on death and dignity by attorney John Jay Hooker. 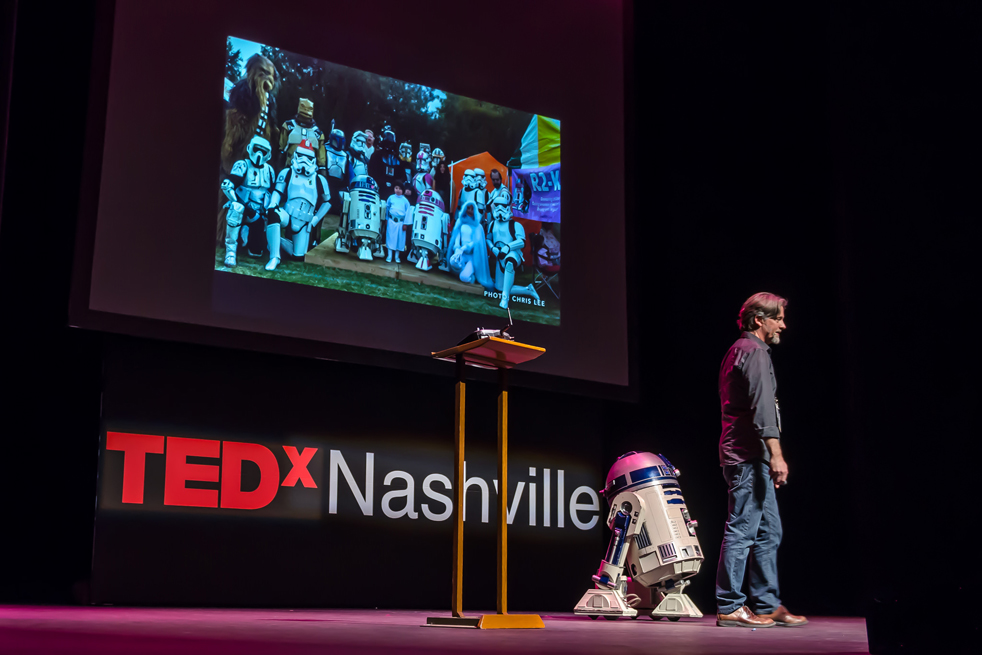 From Kermit to R2D2. At TEDxNashville, speaker Chris Lee brought his Star Wars-inspired companion on stage with him. Photo: TEDxNashville

Two hundred miles away, Atlanta, Georgia is the home to two major annual TEDx events: TEDxAtlanta and TEDxPeachtree, both of which have been held since 2009. This points to a trend in the region — that several cities have developed distinct, coexisting TED communities. Rather than experiencing a saturation or dilution of resources and passion as their communities have grown and overlapped, the organizers look at the addition of new TEDx events in the area as a positive.

“From an attendee’s point of view, going to TEDxAtlanta is a very different experience from going to TEDxPeachtree, TEDxEmory, or TEDxCentennialParkWomen,” explains TEDxPeachtree licensee Jacqui Chew. “Every single event takes on the personality and point of view of its planning team. I think that’s what makes each TEDx event so special.”

TEDxPeachtree’s personality comes from an organizing team that is always rotating, allowing room for new voices and ideas. “We’re proud of our very intentional succession planning,” says Chew. “Each of us with functional roles in the organization, we are always on the lookout for our replacement.”

Tod Martin organized the first TEDxAtlanta almost by accident. After hearing jazz pianist Eric Lewis play at TED2009, Martin wanted to bring the musician to perform at his strategy firm, Unboundary. When he heard Chris Anderson announce the launch of the TEDx program, he decided to add a slate of speakers in addition to Lewis’s performance. Six years later, the event’s format has retained that idea of opening with a musical performance. “I find it helps people put the work day behind them and shift their focus to the program,” says Martin. Another ongoing tradition at TEDxAtlanta: ending with a private chef’s tasting. 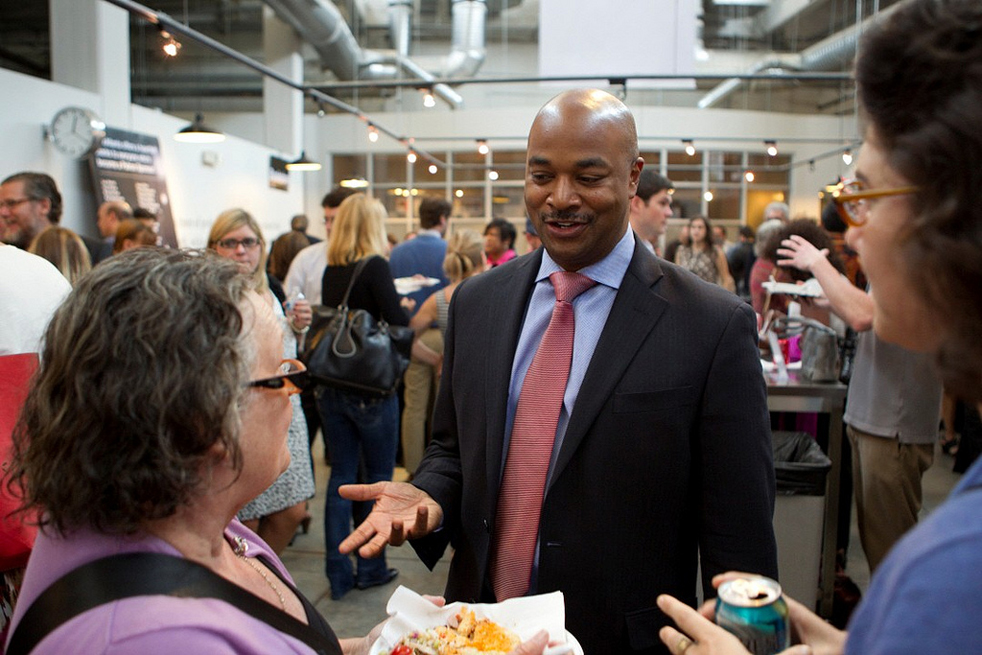 Attendees discuss what they heard at TEDxAtlanta over a private chef’s tasting. This tradition always closes the event. Photo: TEDxAtlanta

Martin has watched TEDx grow in the south, and he himself has mentored other events such as TEDxHuntsville in Alabama and TEDxNorthClaytonHighSchool, held at a school just south of the Atlanta airport. One day, Martin got a phone call from organizer Nana Darko, a sophomore at the school. Unable to make out what Darko was saying, Martin told him he had the wrong number and hung up. A few minutes later, Darko called again. “I thought it took bravery to call in the first place, and even more bravery to call back when someone’s hung up on you,” says Martin.

On June 13, many organizers from all over the south will converge in Atlanta for an organizer’s workshop hosted by TEDxPeachtree. With an unconference format, the meetup will be an exchange of TEDx experiences and give attendees a chance to learn from one another. Chew, who will be hosting the gathering, also wants to propose a volunteer exchange program. If volunteers could travel between TEDx events, she says, that would allow the ultimate cross-pollination of ideas.

“TEDx organizers are very special people. We’re dedicated, we’re organized, and many of us are Type A,” says Chew. “We are good at what we do. We’ve figured out at least two-thirds of all the different components of a good TEDx event. They just may not be the same two-thirds. Therein lies the gap.”