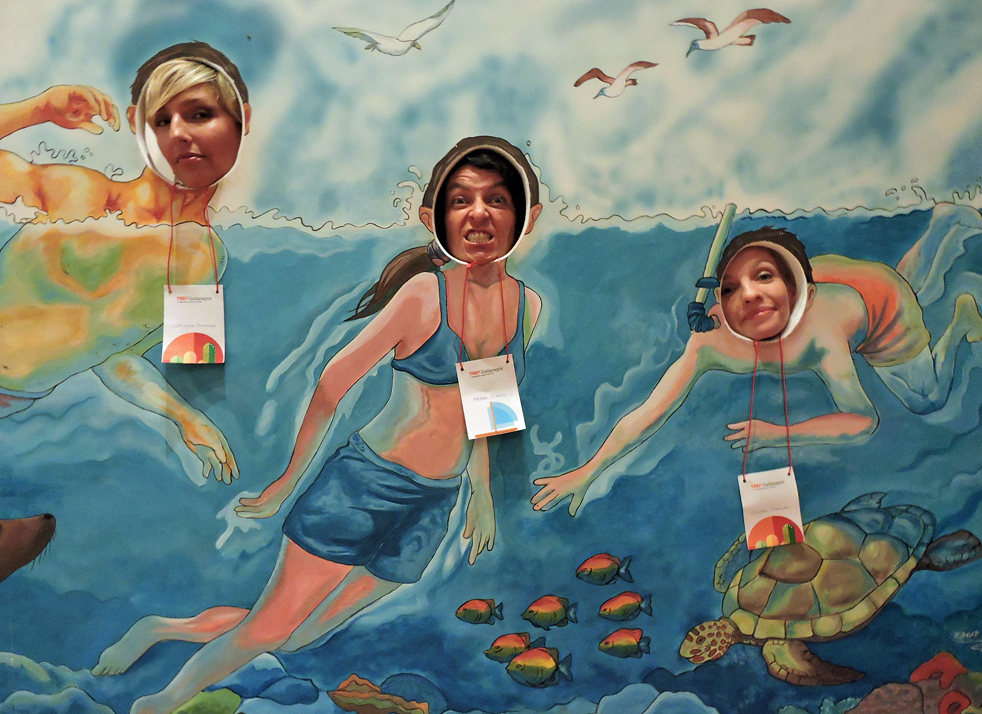 Attendees at TEDxGalápagos have some photo fun. While the Galápagos Islands are famous for their wildlife, the focus of this event was on: the people that live there. Photo: Courtesy of TEDxGalápagos

There aren’t many places on earth more mythical than the Galápagos Islands, the archipelago that sparked Charles Darwin to form his theory of evolution almost two centuries ago. Protected as a World Heritage Site, they’re bursting with life, from ancient tortoises to Darwin’s finches to bright sea creatures. But as a place for people to live, the Galápagos is surprisingly complicated.

“You can’t leave people out of the equation if you’re talking about conservation,” says Veronica Reed, co-host of TEDxGalápagos. “There are a lot of stories that people don’t know about, because these are not the things you hear when you hear about Galápagos. You only hear about the animals.”

This January, at the first TEDxGalápagos, the audience heard from a local fisherman who admitted that — far from being a hardcore conservationist — he’d been dumping used motor oil off his boat into the open ocean.

Alberto Granja had been dumping oil without a second thought — until he came to realize he was damaging his own fishing grounds. So he started a project to recycle used oil from across the islands; he has so far recovered half a million liters of oil.

“It was important to have people discussing their own issues and the problems they face,” Reed says, “and what they’ve done as individuals or as a community to work towards conservation—or, even, to realize what you’ve done against conservation.”

“What are you going to be able to sell tourists if the islands are destroyed?” 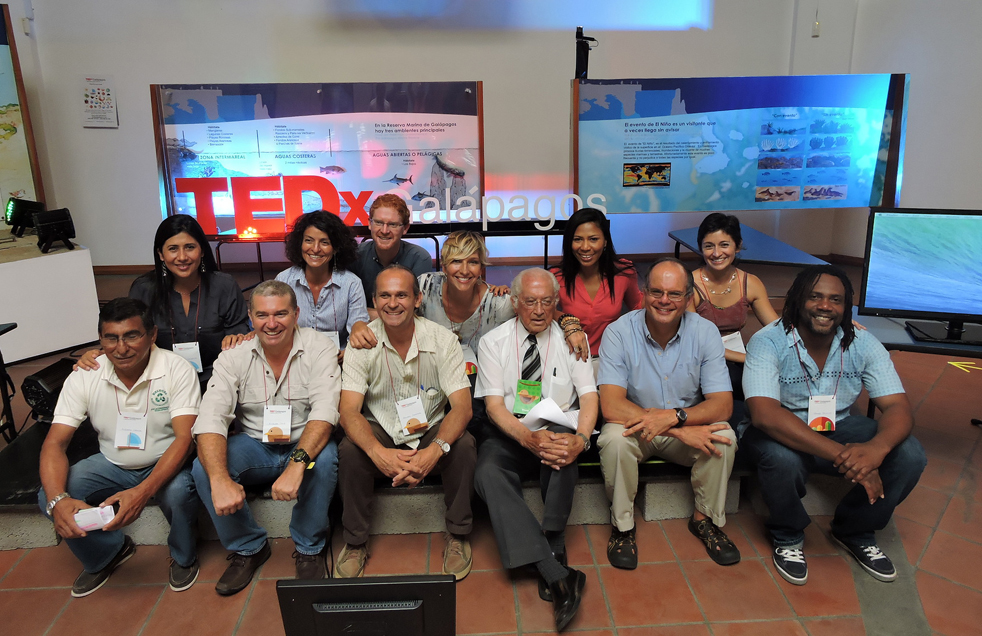 The speaker lineup for TEDxGalápagos included voices from the four inhabited islands of the archipelago. Photo: Courtesy of TEDxGalápagos 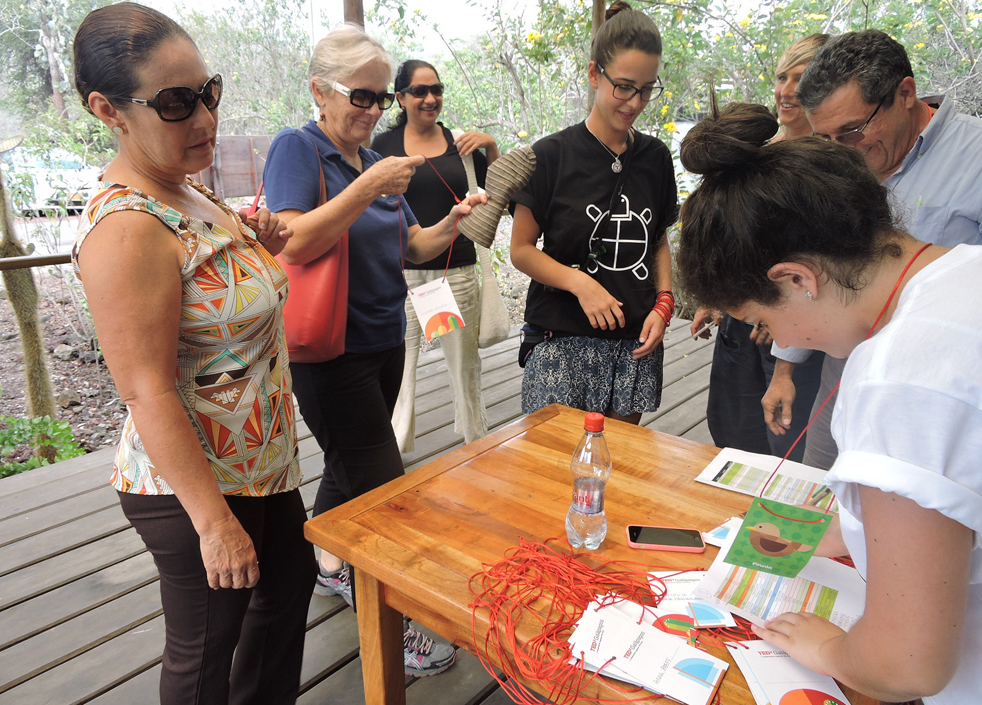 The Galápagos are an archipelago of 19 islands, but only four are inhabited. And each of the inhabited islands “is a world in its own,” Reed says. “If you do something with people from one island, people from another island don’t want to participate. So it’s really complicated.”

“One big issue for us was actually selecting the speakers, because everybody had something to say about the person we were choosing.”

Reed and her co-host (and husband) Renato Solines decided to hold TEDxGalápagos on Santa Cruz, which has the largest population, and recruited speakers from Santa Cruz and Floriana, and two more who had spent time in Isabela and Cristóbal, representing all four inhabited islands. The event encouraged a multi-island dialogue, helping people meet and listen to neighbors they might have criticized before.

“The idea of selecting the speakers was to try to select people who had a relationship with the islands and could tell a story about that relationship,” Solines says.

The event was held at the bright and airy Miguel Cifuentes Interpretation Center, part of Galápagos National Park. Eighty attendees — the maximum — signed up in advance, and although 40 didn’t show, 30 walk-ins took their place. That was expected, as on the islands most people travel by boat. “It’s very difficult for you to plan ahead of time,” Reed says.

But, she adds, “People were very eager and engaged from the first talk on. During the break, people gathered in a covered courtyard to talk about the ideas they heard.” 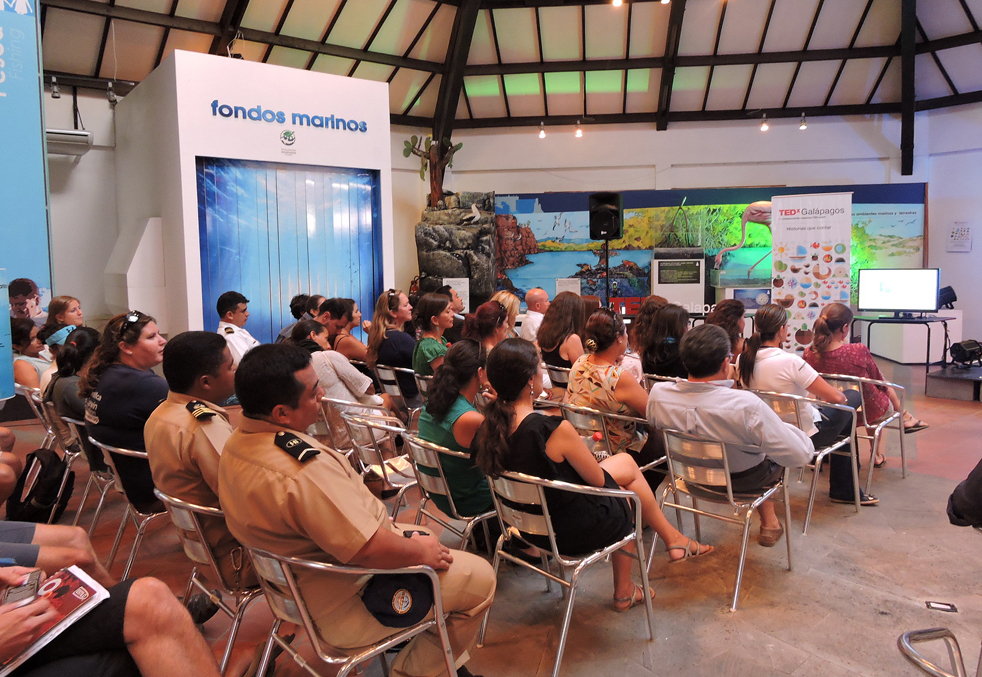 Half of those who RSVPed weren’t able to actually get to the event — to be expected in a place where boat travel rules. Photo: Courtesy of TEDxGalápagos 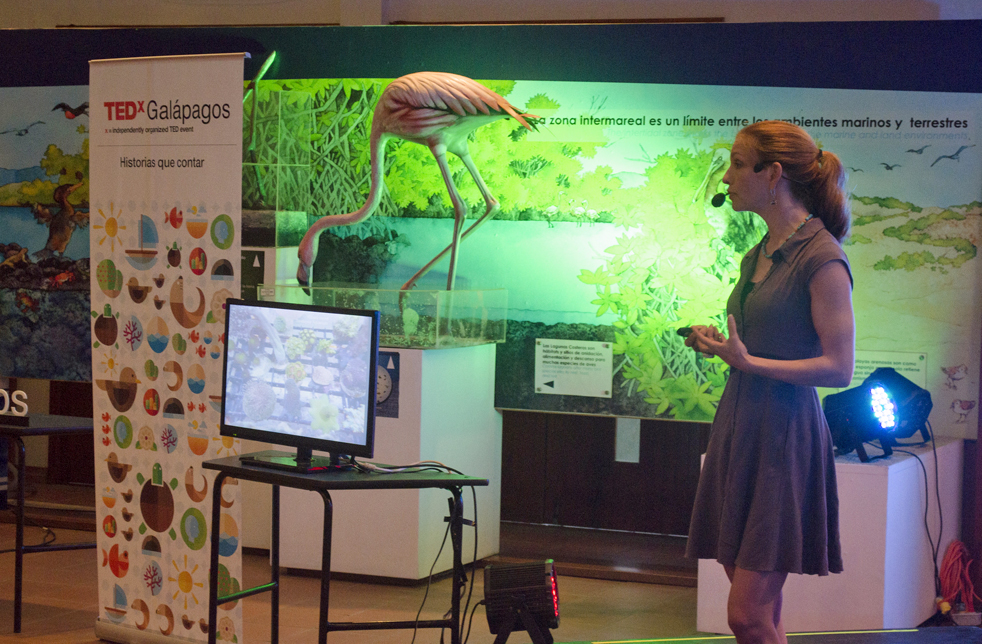 TED Fellow Colleen Flanigan spoke about coral reef ecosystems, and what they need from human beings in order to thrive. Photo: Courtesy of TEDxGalápagos

Booking and rehearsing the speakers was a huge challenge. Internet and cell phone connections are unreliable on the islands, and the Galápagos are more than 800 miles from the Ecuadorean mainland. The pair had to fly to the islands three times from their hometown in Quito, a two- to three-hour flight, to meet with everyone on their program. One speaker cancelled because the venue would have been a bumpy two-hour boat ride away. Another recommended speaker simply couldn’t be contacted by any means.

These difficulties are part of the reason Reed and Solines decided to launch the event in the first place. Reed, an architect and a TED Fellow, and Solines run an environmental design company, and they’re working with an Argentinian company to develop sustainability strategies for Seymour Airport on the island of Baltra. As they traveled back and forth on the project, they started to notice the exclusive focus, in discussions of the Galápagos, on animals and environmentalism. What about the people living there?

The difficulties and pressures that residents face are many, starting with overcrowding and mass tourism, poaching and pollution on land and sea, and lack of job and cultural opportunities for islanders. Talks at the event offered some new ways to think about those problems.

One speaker, mapping expert Daniel Orellana, is working on Galápagos 360˚, which lets people to tour the islands via Google Street View — a way of showing “as many people as possible the wonders of Galápagos, without the footprint,” Reed says.

Reed also invited one of her fellow TED Fellows — ecologist Colleen Flanigan — to talk about her work installing large, undulating metal forms in damaged coral reefs. By running low-voltage current through them, these skeletons attract minerals and become a scaffold for new corals. These sculptures can grow two to six times faster than wild corals on their own. “We thought it would be great for people to see how you can not only reduce the impact you have on natural ecosystems — but how you can have an impact in a positive way,” says Reed. “[Colleen’s] work shows that humans and the natural ecosystems can rely on each other. Her talk was very week-received.”

Speaking at TEDxGalapagos brought Flanigan to South America for the very first time. While there, she also did a workshop for kids and surfers from Santa Cruz, working with them on a collaborative sculpture. “It was great,” says Reed.

Next steps? Reed and Solines will need to figure out how to spread these TEDx Talks around the islands on video, given the lack of internet access. And the next TEDxGalápagos, they hope, will be held in about 18 months. The first was funded mostly out of their pockets, but they’re hopeful about sponsorship going forward. It’s also always easier to deal with obstacles the second time around. Right? 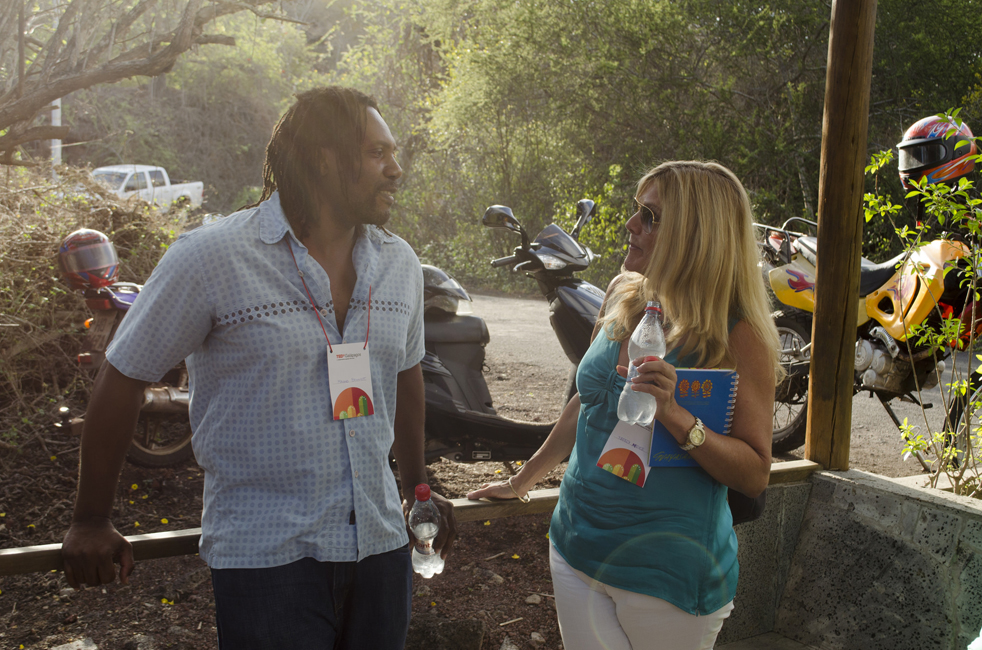 Attendees took their break outside, where they discussed ideas under sunny skies. Photo: Courtesy of TEDxGalápagos 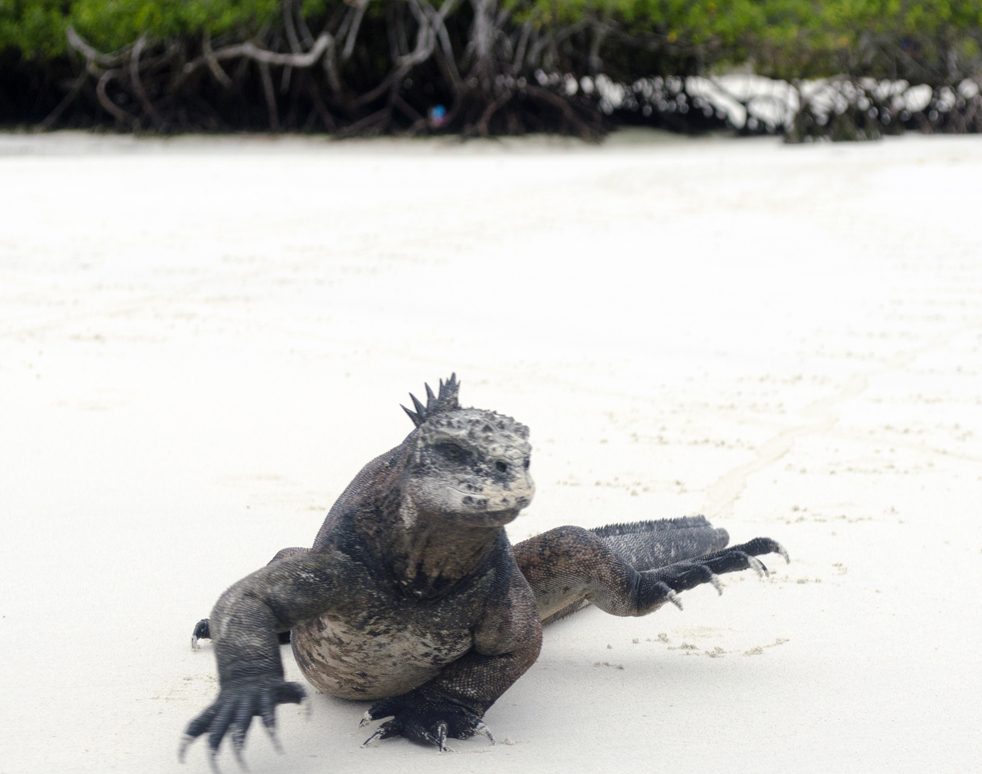 While the event focused on people, the incredible wildlife made an appearance. Photo: Courtesy of TEDxGalápagos 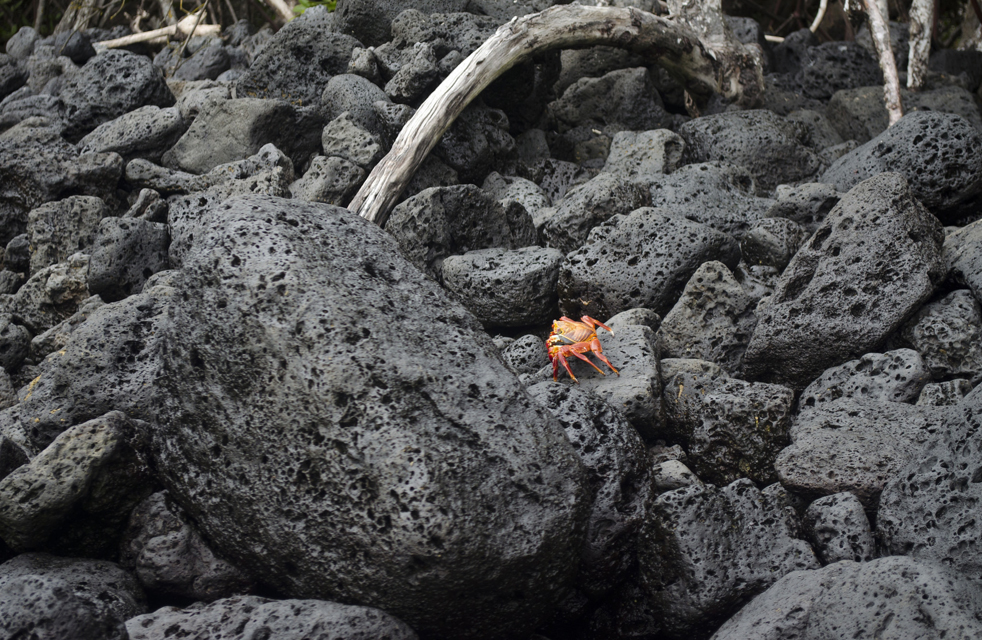 Another wild inhabitant who made an appearance. Photo: Courtesy of TEDxGalápagos