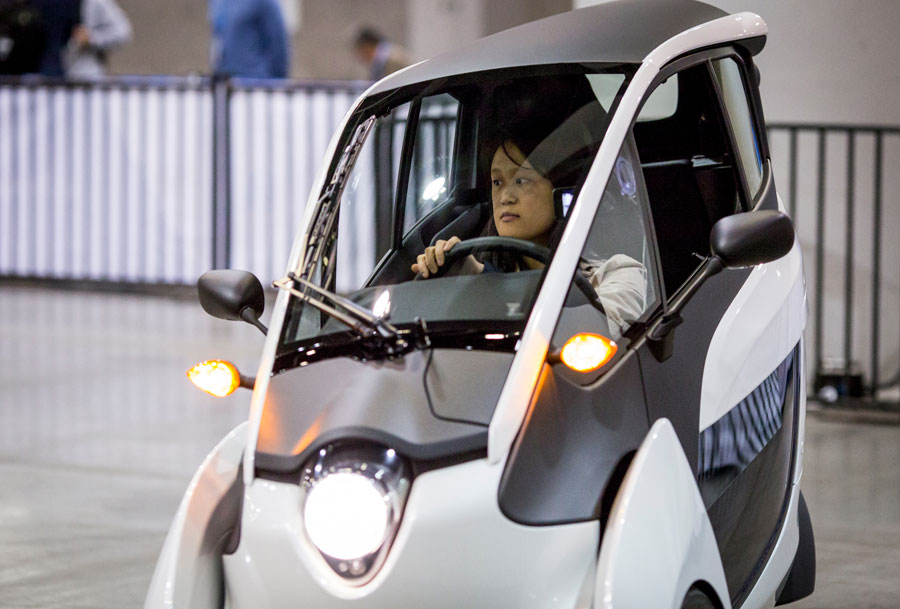 A three-wheeled half-motorcycle half-car, the Toyota i-Road is imagined as a future for urban transportation — tiny, battery-powered and hyper maneuverable, perfect for zipping along tightly packed urban streets. The concept car was launched in March 2013, but there are only three i-Roads in North America right now, and all of them are at TED2015 this week. Which is why I found myself down in the loading dock of the Vancouver Convention Center, behind the wheel of this very small vehicle.

Being honest, driving an i-Road is a bit like riding a video game unicycle.  The car steers with its single rear wheel, which at first makes it hard to feel like you’re in control. What’s cool is that the car leans effortlessly with you as you make it turns — and it leans pretty far, like a motorcycle. Though it feels like it might just give out and flip onto its side, the attendant assured me that was very hard to do; the two front wheels grip the road, even at sharp angles. There’s a top speed of 45km/h, and the way the car tells you you’re going too fast is it starts to shudder — a lot like my 1993 Toyota Tercel did when I hit 80 miles per hour.

The i-Road is meant for short hops and city commutes. You could imagine using it on days you don’t want to bike because the weather is bad, or you have a lot of groceries, or because you hate biking (but like the environment). It takes three hours for the car to charge, and a charge can last for thirty miles. There are no plans to launch it in North America, but it’s been tested on roads in Japan and France (where they even set up an i-Road carshare).

The i-Road is being branded as a souped-up motorcycle that you don’t need a helmet for, but it’s less a shuddering thrilling death machine and more a futuristic podlike toy that hums quietly off its battery. While driving, it was a bit hard to take myself seriously – kind of the opposite of how I feel on a motorcycle.