Many unusual things have happened on the TED stage over the years. Our incredible speakers have done everything from perform magic tricks to attempt to set themselves on fire, all in the name of spreading their ideas. Although far from a complete list, here are some of the weirdest TED moments that we still haven’t stopped puzzling over. To many more in 2015. 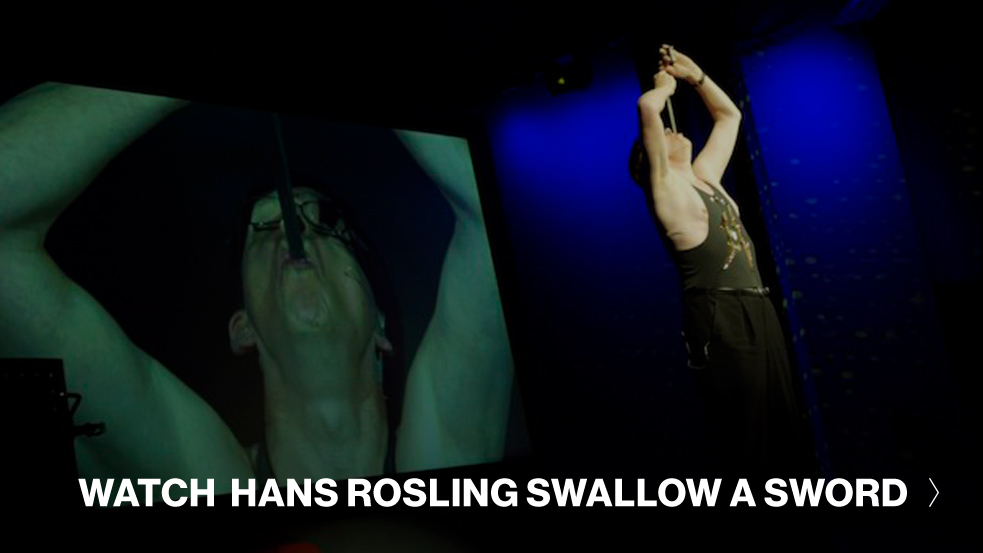 1. Hans Rosling: data genius and… sword swallower? He’s given 10 TED talks about global progress, so we thought we had seen everything Hans Rosling was capable of. But at TED 2007, we learned that Rosling had a few tricks left up his sleeve. In this talk, he presented new data about developing nations with his usual enthusiasm and awesome graphics … but then things took a turn. At the 17-minute mark, Rosling unbuttoned his shirt to reveal a sequined tank top. He said to an off-stage assistant, “Bring me my sword!” To prove that the seemingly impossible is indeed possible, Rosling swallowed the solid steel bayonet. And we’ll never think about global development in the same way again. 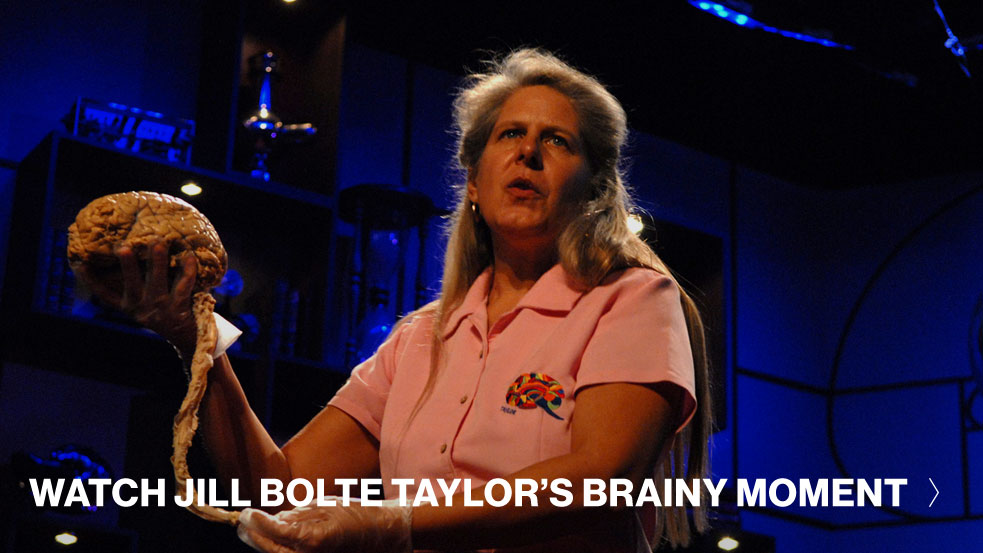 2. This is what happens when you donate your brain to science. Neuroanatomist Jill Bolte Taylor’s talk is stunning for many reasons—her story of what it was like to experience a massive stroke will make your heart stop. But she makes this list for her very notable prop choice. At 2:30, Taylor holds up an actual human brain, its still-attached spinal cord swinging merrily below. As she shows how it is positioned in the human body, she firmly makes the point that our amazing minds are also, and at the same time, kind of a blob of gray goo. 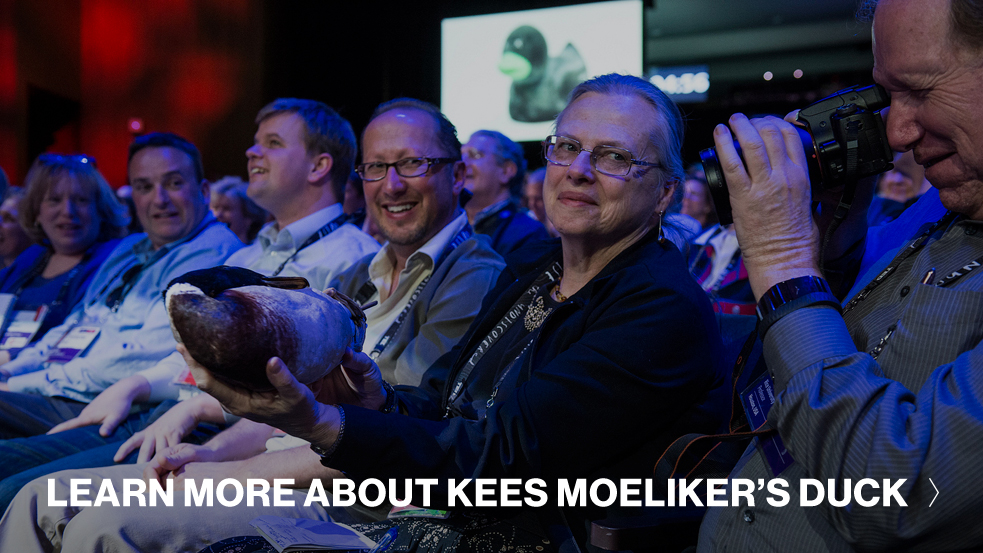 3. The story of a man and his dead duck. Ornithologist Kees Moeliker won the Ig Nobel prize for inspiring future generations of scientists with a strange but serious paper about the mallard’s inclination toward homosexual necrophilia. During his talk at TED2013, Moeliker shared the odd story behind his research… and handed an audience member the stuffed dead duck that inspired it. Before leaving the stage, he politely asked for the duck back, as it is technically a museum specimen. 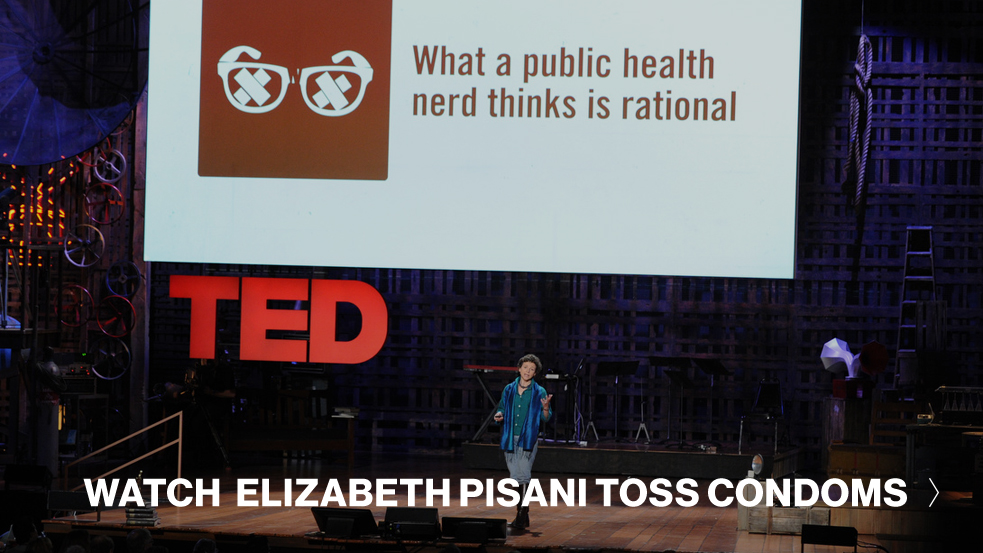 4. Elizabeth Pisani makes like a condom dispenser. People in the front row during Pisani’s talk at TED2010 got some sweet freebies: the public health advocate threw a handful of condoms into the audience. As she criticized Pope Benedict’s discouragement of contraception use in nations struggling to slow the spread of HIV, she said, “I’ve got news for you, Benedict. I carry condoms all the time and I never get laid!” She then pulled a wad of the prophylactics out of her pocket and tossed them with flair. “Here, maybe you’ll have better luck.” 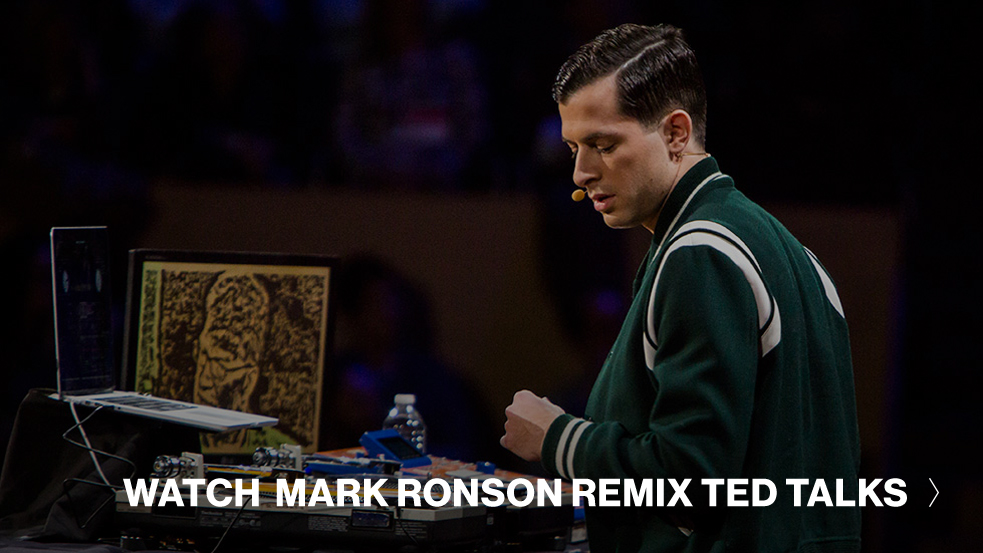 5. Mark Ronson remixes TED Talks. At TED2014, Ronson sampled clips from a bunch of TED Talks into a bizarre and catchy remix. He showed how sampling helps  musicians make something new out of a piece of media they love—injecting new layers into a story already in progress—and extended this concept to his favorite talks. “Sir Ken Robinson and I are not going to end up being the best of friends,” Ronson said regretfully, “but through the tools available to me… I can sort of bully our existences into a shared event.” 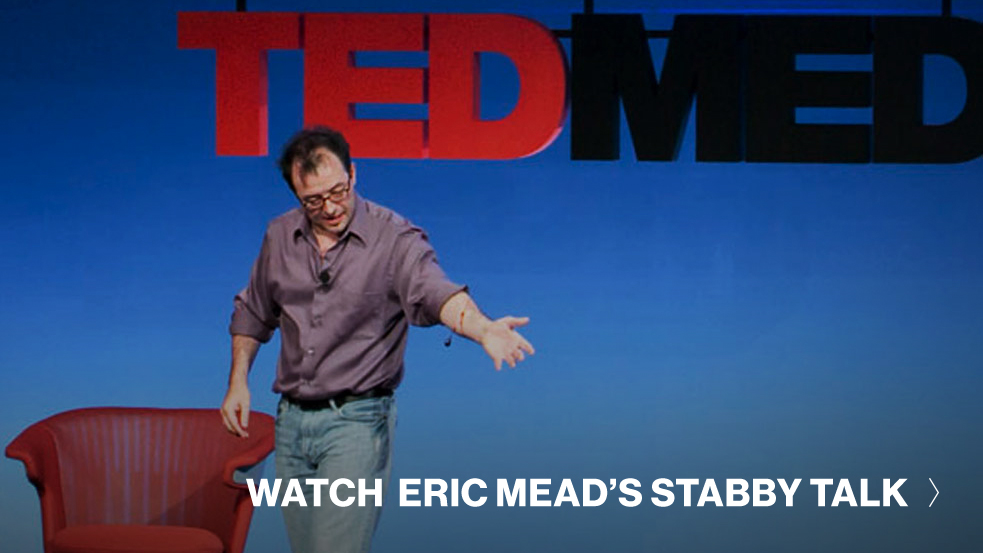 6. Eric Mead impales himself on stage… maybe? We know that magician Eric Mead did not actually stab himself in the arm with a hat pin—his talk was about the placebo effect and how people can believe anything if it seems real enough. But the blood dripping down his arm at the 8-minute mark of this talk looked pretty darn convincing. Be warned: this talk is not for the faint of heart. 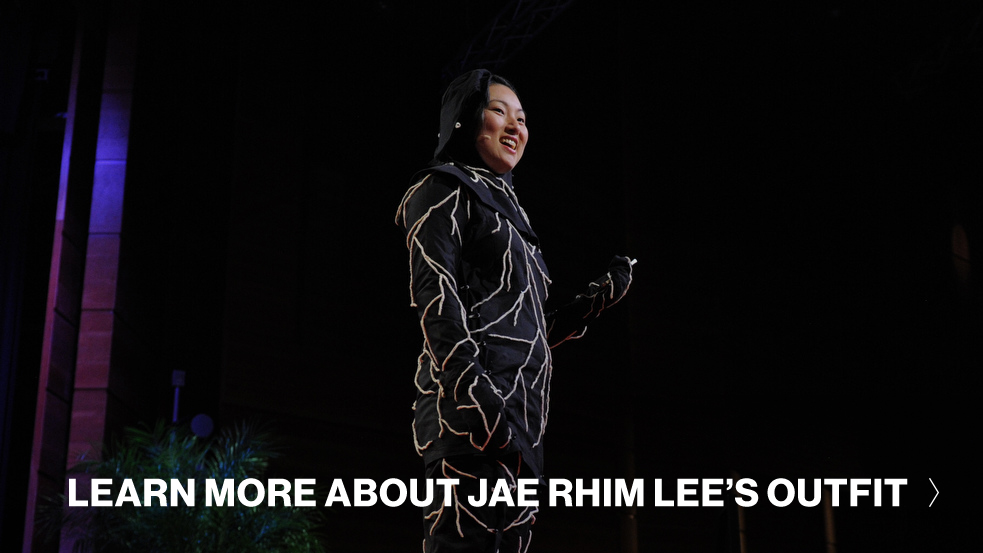 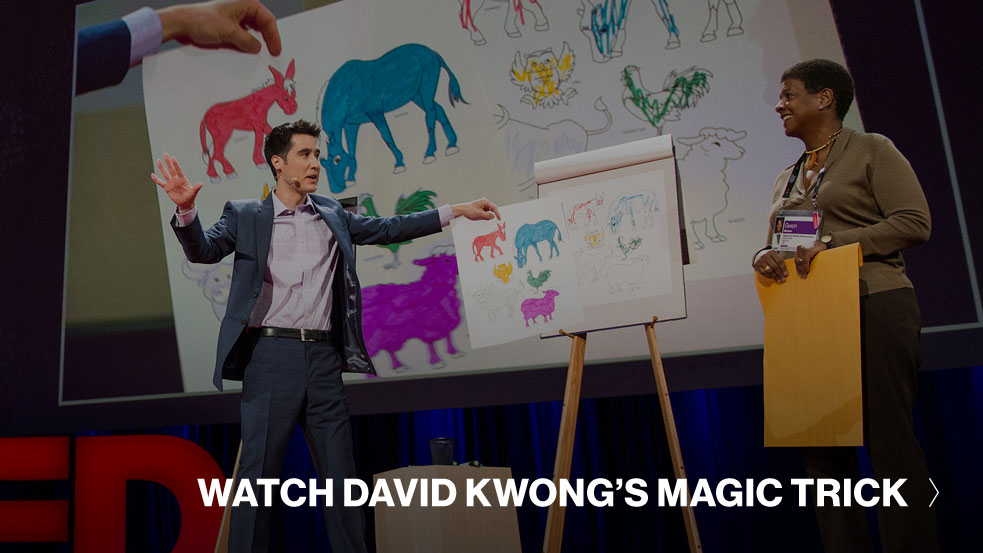 8. A TED Talk extends to The New York Times crossword puzzle. David Kwong is a magician as well as a crossword puzzle constructor—but when he started his talk, we didn’t see his crazy trick coming. At the 4-minute mark, Kwong pulled a volunteer out of the audience and asked her to color in some farm animal cartoons. At 9:20, he revealed that he had correctly predicted which colors she would choose for which animal … and baked the answers into that day’s edition of The New York Times crossword. Never has hearing “But wait, there’s more!” been so satisfying. (And hear why Will Shortz decided to participate in this trick.) 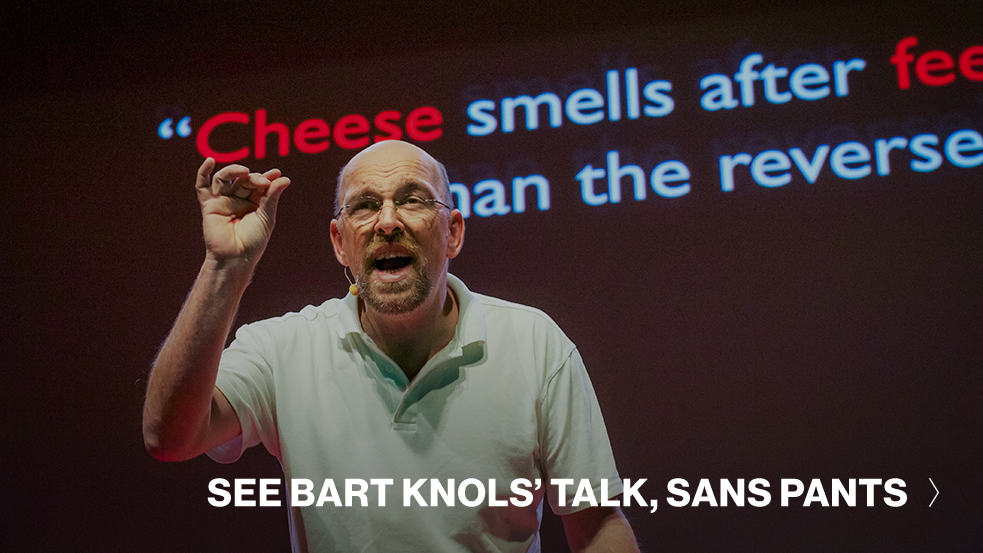 9. Bart Knols gives his talk… in his underwear. What’s more annoying than a mosquito bugging you while you’re in bed? To remind us of this, malariologist Bart Knols started his TEDx talk from a bed onstage. He emerged from under the covers to share the details of his research on the spread of malaria … aaaand he never stopped to put on pants. Also notable: watching hundreds of mosquitoes feed on his arm in a metal box on stage, at the 8:09 mark. 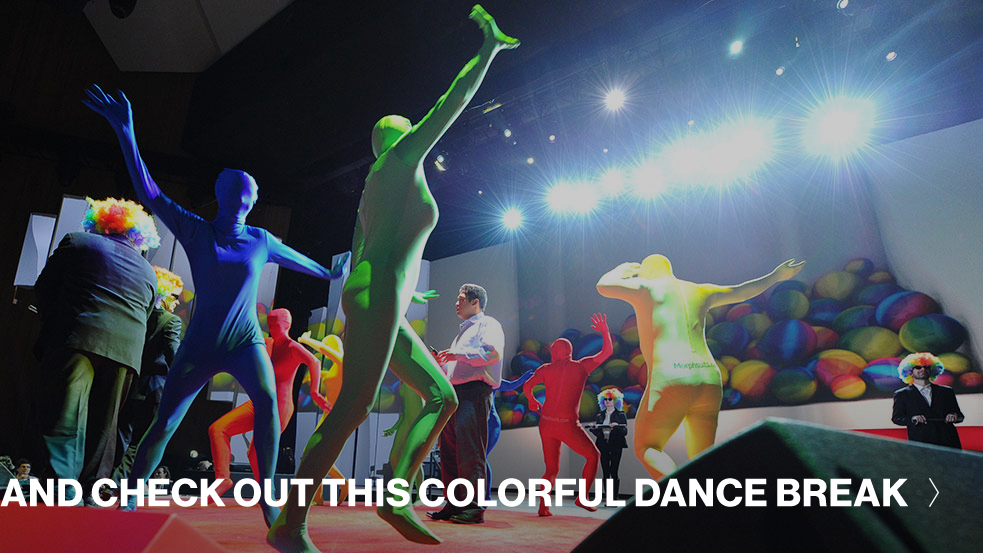 10. This is what happens when your slides won’t load . Colin Robertson took the stage at TED2012 to plug his tech start-up in the field of solar technology, or so the audience thought. But when his slides froze, the next three minutes turned into colorful pandemonium — as Improv Everywhere pounced onstage in rainbow morph suits to produce a dancing tribute to the spinning wheel of doom.