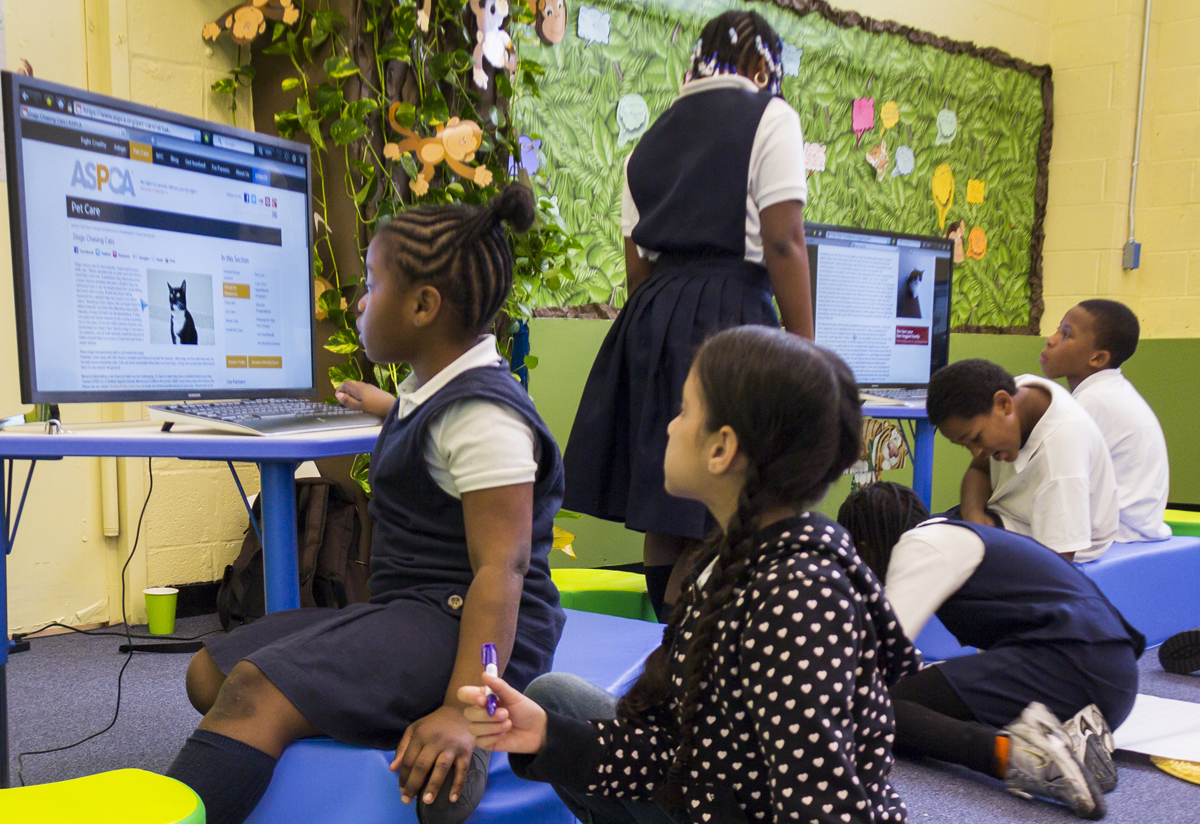 At SOLE NYC, the first School in the Cloud learning lab in the US, students work in groups to answer fun, open-ended questions. On Wednesday morning, students researched: why do dogs chase cats? The assignment had them looking at cat photos online. Photo: Dian Lofton/TED

On Wednesday morning at John B. Russwurm Elementary School in Harlem, students pointed excitedly at cat photos on the Internet. No, they weren’t goofing off. They were participating in a “self organized learning environment,” or SOLE, a teaching method where kids are given an open-ended, curiosity-stroking question and asked to research it in small groups.

This morning’s question: Why do dogs chase cats? The students laughed and debated as they discovered new insights online. With markers uncapped, they laid down on the floor and discussed how to present what they’d learned to the rest of the class.

Students at Russwurm Elementary have done SOLEs before, but the session on October 14 was a special one. It took place in a new classroom called SOLE NYC. This bright, airy space — decorated with jungle wallpaper and monkeys, with felt clouds dangling from the ceiling — is the first School in the Cloud learning lab in the United States. It joins five School in the Cloud labs in India and two in the UK as the eighth space designed specifically for SOLEs.

Third and fifth grade classes at Russwurm Elementary will each go into the lab once a week to investigate a new question — some picked by teachers and some picked by kids. Meanwhile, fourth graders will use the lab daily to answer science questions like: “What would happen if there were no insects?” and “Can you use a compass in space?”

“The more I watch,” said school principal Natasha Spann, “the more I see how much they can learn from it.”

This unconventional way of teaching is the invention of education innovator Sugata Mitra, the winner of the 2013 TED Prize. With the $1 million prize, Mitra started opening School in the Cloud learning labs and launched an online platform to let educators hold SOLEs anywhere in the world with Internet access. Mitra flew from his homebase at Newcastle University in the UK to attend the opening of SOLE NYC, and to celebrate the School in the Cloud’s arrival in the US. 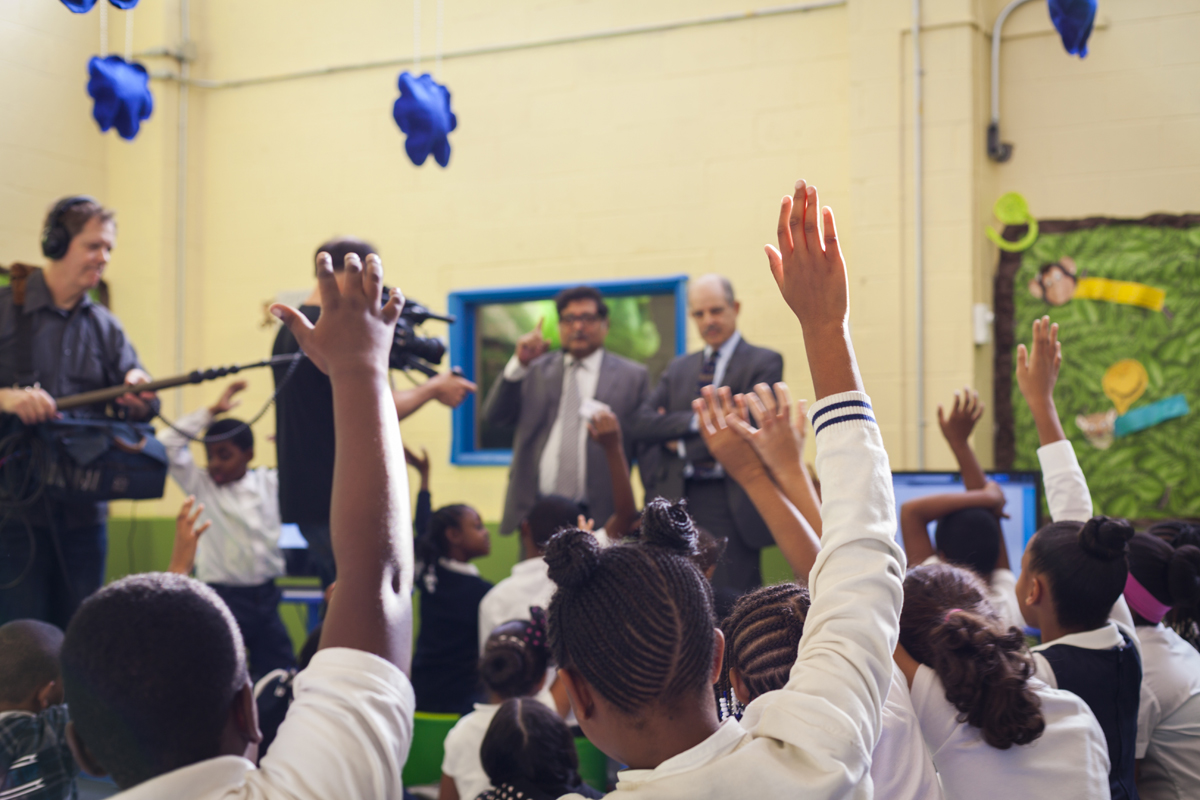 Students at SOLE NYC in Harlem raised their hands to ask questions of 2013 TED Prize winner Sugata Mitra (center). They wanted to know old he is, and how he convinced his boss to let him put a computer outside in the middle of a New Delhi slum. Photo: Dian Lofton/TED

On Wednesday morning, Mitra led the students as they researched why dogs chase cats. “You can talk as much as you like,” he said. “You can look at other people’s work.”

The idea behind SOLEs is to move past memorization, and help students think critically, find information and ask big questions. As the six groups in the room presented what they found, Mitra pointed out the differences in how the groups thought about the question. One group noted that dogs chase cats for play – and that it only becomes dangerous when a cat gets annoyed and bites or scratches. Another group highlighted the typical size differential between the two animals. Another focused on how dogs don’t always chase cats but that, often, the two coexist peacefully.

“Asking why dogs chase cats is like asking, ‘Which came first: the chicken or the egg?’” said a student from another group. “It’s instinctual.”

Mitra lit up. “There’s something important here,” he said. “This is the first group that’s looked to explain why dogs chase cats. They suggest that dogs may be hardwired by history for this behavior.”

As the SOLE wrapped up, Mitra continued talking with the students. They wanted to know about his Hole in the Wall experiment, where he placed a computer in the wall of a slum in New Delhi, India, and was astonished to find that the kids learned to use it on their own.

“How did you make the Hole in the Wall experiment?” one student asked.

“I had to convince my boss to give me money to put a computer outside. He thought it was a waste,” said Mitra. “But companies waste a lot of money, so I said, ‘Why not waste a little more?’”

Another student wanted to know how he picked questions for SOLEs. “Do you always know the answer?” she asked. 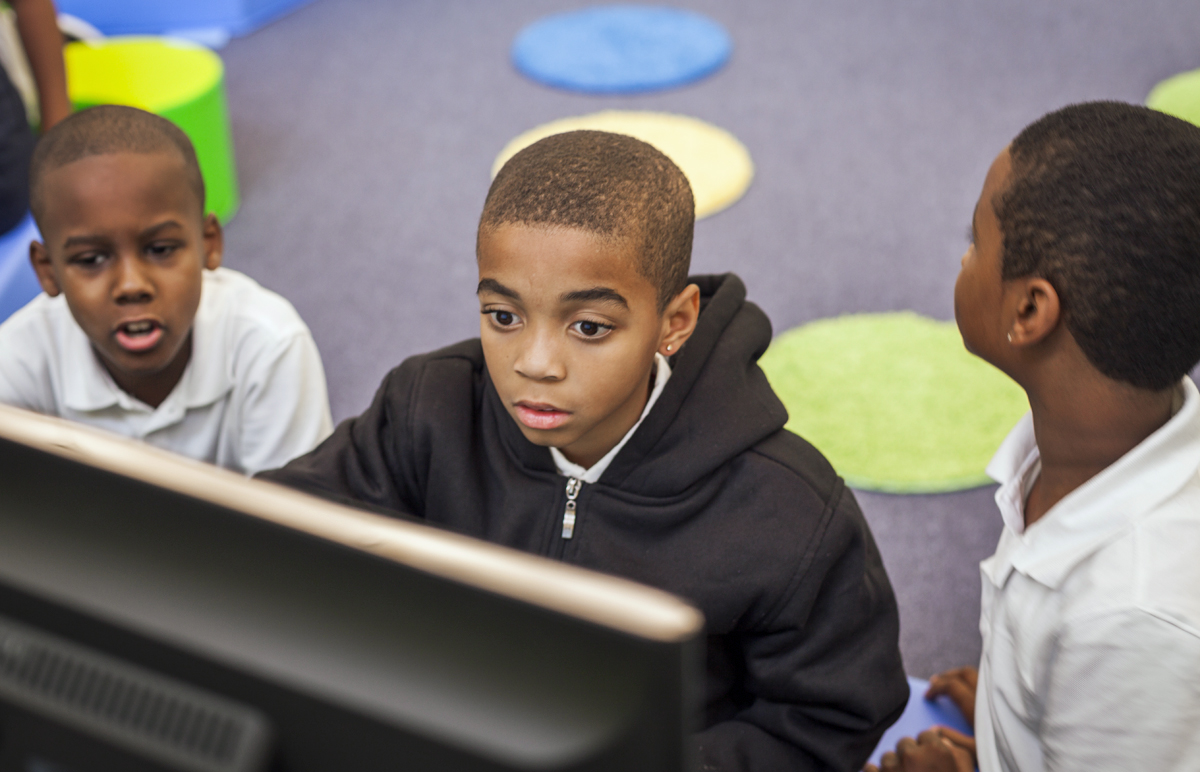 The SOLE NYC learning lab is filled with dot carpets, where students sit as they’re given a question to explore. In a ring around the outside of the room, they can congregate at six computers with large screens. Photo: Dian Lofton/TED