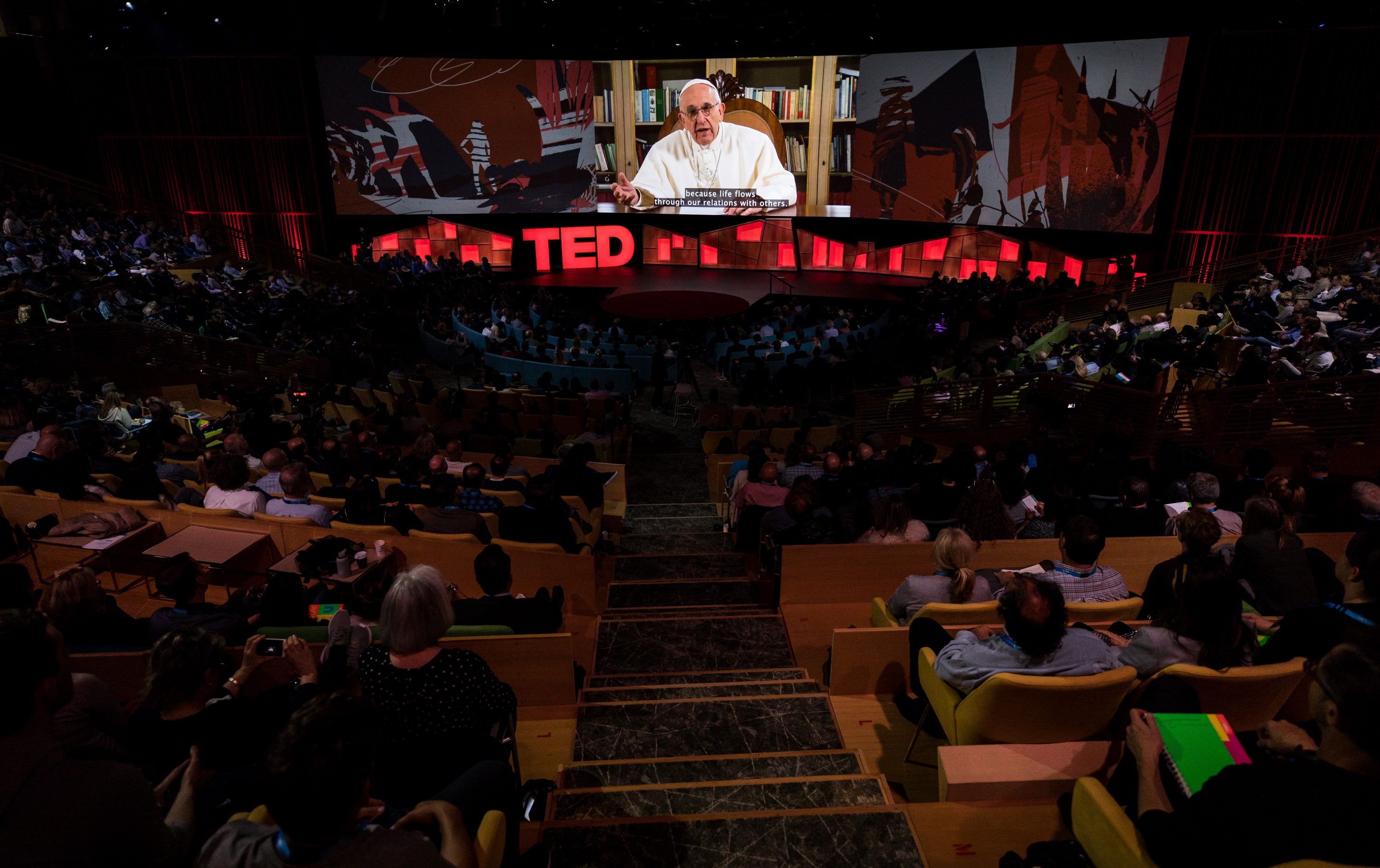 On Tuesday night, we published a very special TED Talk, recorded for TED2017 by His Holiness Pope Francis in Vatican City. In it, His Holiness comments on the state of the world as we find it today and shares some ideas on how we can find hope for the future in togetherness.

A talk of this significance required careful planning, collaboration, attention to detail — and the ability to keep a secret, as Pope Francis was not announced in the event’s public program. It was also the first time he has addressed an international conference. And after the talk was screened for the live audience in Vancouver, there was curiosity about how it all came together.

Bruno Giussani, TED’s International Curator, coordinated the creation of the talk over the course of a year with the Vatican. We asked him how the talk came to be.

What about the present moment made it the right time for a talk like this?

Bruno Giussani: Pope Francis is clearly very concerned about the current state of the world. There is a sense of urgency in his actions and his words. In the talk, he uses strong language to denounce the “culture of waste” arising from our techno-economic system and our obsession with “money and things.” He talks about “the evil we breathe every day,” which is a clear reference to the increasingly sectarian and hate-filled political space. He invites us to pay attention to the changing climate, to growing inequality and to the disruption brought about by technology. And he addresses the diffuse feeling of powerlessness by observing that many people don’t seem to believe in the possibility of a happy future anymore. He warns us that these concerns are to be taken very seriously. But he also insists that they are not invincible, that we can create a different world by re-engaging with and taking care of each other. In this complicated and often confusing world, Pope Francis has become possibly the only moral voice capable of reaching people across boundaries and providing clarity and a compelling message of hope.

“Hope” is a key concept in his talk indeed.

BG: Yes, and he uses it in a quite political way. The Pope makes it very clear that hope should not be seen as naive optimism but as the ability to project ourselves collectively towards a better future. At the same time, he issues an eager invitation to confront our individual responsibilities, as well as a forceful warning to the powerful not to let their power go unchecked. In a way, he invites the powerful to be humble and those without power to rise to the challenges of today and tomorrow. Given that today’s world seems to be moving in the opposite direction, that’s almost an insurgent idea.

How does one go about inviting the Pope to give a TED talk?

BG: It took many discussions to make the talk happen — and several trips to Rome over more than a year. When I first approached the Vatican, it’s fair to say that not many there knew of TED. So there was a lot of explaining to do. I won’t mention any names, but I could count on the help of several people who have been generous with their access and contacts, and whom I want to thank. Finally, the Pope has a capable group of collaborators who are very open and interested in social media, digital platforms and new formats. Twitter, Instagram and streaming aren’t foreign words at the Vatican, as millions of followers know.

TED curators usually work closely with speakers in preparing the talks. What was this writing collaboration process like?

BG: Of course Pope Francis decided by himself what he wanted to say in the talk. In preliminary discussions, his collaborators were eager to better understand the nature of the TED community in order to fine-tune the message, and they were very receptive to ideas and suggestions.

Where is the Pope speaking to us from, and who filmed the talk?

BG: The talk was filmed by a camera crew from the Vatican Television Center in a small room lined with books at the Domus Sanctae Marthae, the guesthouse where Pope Francis lives in Vatican City. When he was elected Pope, in March 2013, Francis decided that he would not move into the elegant papal apartments overlooking St. Peter’s Square but would live instead in the unassuming guesthouse, where he also celebrates Mass with Vatican employees in the early mornings and takes his meals in the common dining room. It’s a sign of modesty, but I believe that the Pope also wants to send a message suggesting that it’s possible to change — to live in a different, simpler way.

How did the talk evolve into its final form?

BG: After the recording in Vatican City, the reels were transmitted to our video editors in New York, who prepared the final version. In parallel, given that His Holiness gave the talk in Italian, a group of 40 TED Translators across the world started quietly working on subtitling it. Despite very tight deadlines, they did such a good job that we could post the talk on TED.com already complemented by subtitles in 20 languages — and we will add more in the coming weeks. Meanwhile, our social media team prepared to mobilize all our channels to disseminate the talk. At a certain point, nearly 80 people across our team and in Vatican City were aware of the talk — but we managed to keep it confidential until the moment we unveiled it at TED2017.

You also recorded a full voice-over of the talk in English. How did that go?

BG: We do release audio-only versions of all TED Talks, which are distributed on iTunes, Amazon’s Alexa, the TED apps and on podcast platforms to audiences of many millions. Pope Francis’s talk, however, is in Italian. The video version appears on TED.com with English subtitles, but for the audio-only version we needed dubbing. The producers wanted a voice with an Italian accent, and I knew the talk well, so they asked me to do it. They got an abundance of accent… It wasn’t easy: trying to render both the message and the vocal presence of the Pope in another language is as tall an order as there is. I hope I did it justice.

While introducing the talk at TED2017 in Vancouver, you showed an amazing picture of Vatican City. Tell us about it.

BG: It is a stunning picture, isn’t it? It’s the newest work by photographer Stephen Wilkes. He gave a TED Talk last year describing his technique for capturing the passing of time in a single image by shooting a scene through the day and night and then layering elements of every picture into a final image. It shows St. Peter’s Square full of people on Easter Sunday, and it hides a secret: while Stephen was photographing, hour after hour, Pope Francis moved around the whole square, celebrating Mass and greeting people, and so he appears ten times in various sections of the final picture.