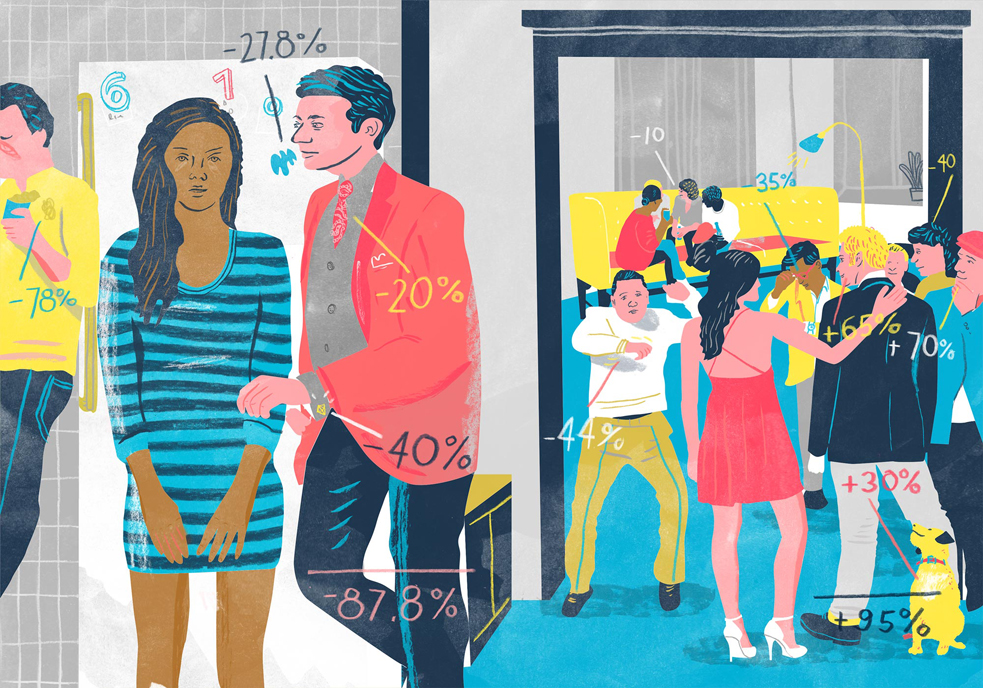 What’s the probability of meeting your true love at a party? Find out in Hannah Fry’s new book, The Mathematics of Love. Illustration: Christine Rösch

When TED asked Hannah Fry to write a book on the mathematics of finding true love, Fry happened to be — of all places — on her honeymoon.

“[My husband and I] have been together for a really long time, so the whole newlywed thing didn’t quite apply,” she says. “But I did feel like I was in a fortunate position in that I have experienced all of the [phases] of the book — being single, going on terrible dates. I’ve gone through all of those things.”

And yes, she says, knowing a bit more math would have helped along the way. 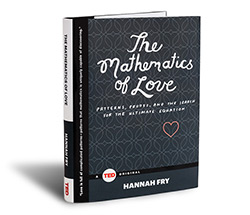 Take the proof that begins on page 25 of her brand-new TED Book, The Mathematics of Love: “Who to approach at a party.” This chapter explains mathematically why people who actively approach those they find attractive at parties, bars and events fare better than people who wait for others to approach them. “I’d always be the person that sat in the corner unable to approach anyone — I was terrible at doing that,” says Fry. “If I had known, I would’ve been way better as a single person. As it was, it was just a series of failures and disasters.”

How did Fry, a complexity theorist, end up writing about math and love? Well, in 2012, she gave a talk at her local TEDx event at University College London. (Watch the talk: “Is life really that complex?”) Across the pond a year later, in upstate New York, a group of student planners were looking for speakers for their own TEDx event, and Fry’s talk set their hearts aflutter. They sent her an invitation to speak. As TEDxBinghamtonUniversity organizer Steve Prosperi remembers it, “To my delight, she accepted rather quickly. Normally, we ask the speaker to talk on a specific topic — but we sort of just told Hannah to propose an idea of what she would like to talk about.”

A week later, Fry shared her idea: she wanted to investigate relationships through a mathematical lens. “It’s a frivolous topic that masks a much more serious point: that math has the potential to offer an important perspective on anything,” she says. “I wanted to prove my point by picking something as far away from math as I could possibly imagine, and demonstrate that — even then — there was insight that could be gained.”

“I’m aware that there’s a contradiction,” she says. “I don’t expect many people to take these tips really seriously. Preparing for this talk was about getting that balance right. Making sure that the topic was interesting, but that I simultaneously was communicating the much more important message.”

As a Brit speaking in New York state, Fry tried her best to sound American. “I failed on that,” she says, laughing as she recalls using the word “minger” — British slang for “a very unattractive person” — in her talk and getting blank stares from the audience.

While Fry might have failed at sounding American, her talk was a hit. And when it was posted on the TEDx Talks YouTube channel a couple of weeks later, TED Books editor Michelle Quint spotted it, and started thinking it could become a book.

“We pretty much immediately knew we wanted her as an author,” says Quint. “She was just so instantly compelling, and her enthusiasm for math— a subject that is tough to make exciting—was completely infectious. We were taken by Hannah’s blend of wry wit and brilliance.”

Fry’s idea for the book was to boil all the information she discovered in her research into one coherent narrative. “I wanted to make it a story. I wanted to start with somebody who was single and looking for love, and then take them through being at a party or perhaps being online, and then the dating situation, and then thinking about marriage, and then actually getting married, and then managing a long-term relationship,” she says. “I wanted it to be a story so that everybody at every stage had a chapter that was relative to them at that exact point in time.”

The Mathematics of Love takes its readers through proofs, patterns, algorithms and equations that can help them understand the aspects of love in a new way. “I want people to enjoy reading it, and then as they leave, realize that they’ve learned something,” says Fry.

In the end, Fry says that while she herself can sometimes be cynical about love, the book that grew out of her TEDxBinghamtonUniversity talk is quite optimistic. “The whole way through, with all of these different bits of data which I got from all these different places, all of them say something quite nice, warm and positive,” she says. “I think this idea that you’re wandering around waiting for ‘the one,’ it’s really depressing. This book shows that if you look at it in a different way, none of that need apply.”

Hannah Fry’s The Mathematics of Love is available through Amazon, Barnes & Noble, Google Play, Indiebound or iTunes. Her talk will be posted on TED.com on February 13, 2015.