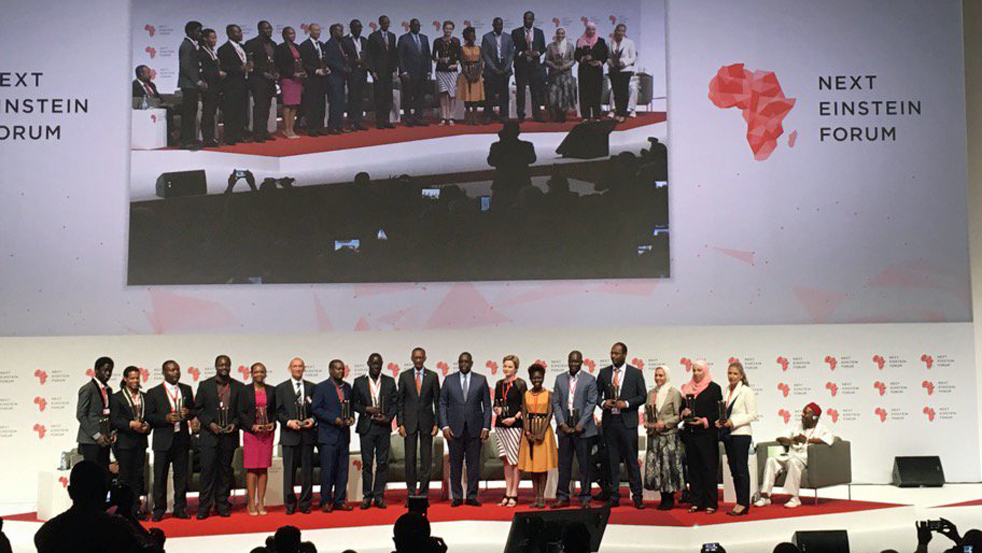 The Next Einstein Forum is bringing together scientists working across the globe with those working in Africa. Each of these 15 young scientists was named a “gamechanger” at the conference. Could one of them be the next Einstein? Photo: Courtesy of NEF

Why did Albert Einstein have such a unique scientific mind? Because he came from a disadvantaged background, says TED Prize winner Neil Turok.

“When new cultures enter science, especially disadvantaged cultures, transformation can happen,” he said today in his opening remarks at the Next Einstein Forum Global Gathering 2016. “I believe that the entrance of young Africans into science will transform science for the better.”

“Can you imagine a thinker who combines the brilliance of Einstein and the compassion of Mandela?”

The Next Einstein Forum is being held March 8-10, 2016, in Dakar, Senegal. It is the first global science forum taking place on African soil, and it’s bringing together 700 scientists, mathematicians and technologists from 80 countries — nearly half of them women and under the age of 42. The forum is the latest development toward Turok’s 2008 TED Prize wish: that we celebrate an African Einstein in our lifetimes.

Turok is the founder of the African Institute for Mathematical Sciences (AIMS), which offers a creative STEM education to African students and aims to improve the statistic that less that 1% of global research is done in Africa. AIMS has opened centers in Cameroon, Ghana, Senegal, South Africa and Tanzania — and in February 2016, Turok signed a partnership agreement with the government of Rwanda to open a sixth center there.

The Next Einstein Forum is key for pushing the work of AIMS forward, because it brings together students from AIMS centers with scientists working all around the globe. Panelists and hosts at the forum include the presidents of Senegal and Rwanda, the ministers of higher education from Morocco and Cameroon, and the ministers of science and technology from Nigeria and Ethiopia, as well as the head of the US National Science Foundation, the editor-in-chief of the journal Nature and working scientists like Nobel Prize winner Aaron Ciechanover.

Watch the Next Einstein Forum live. And sign the forum’s campaign to collect a million signatures, calling on African governments, leaders, entrepreneurs and students to invest in STEM education and research.