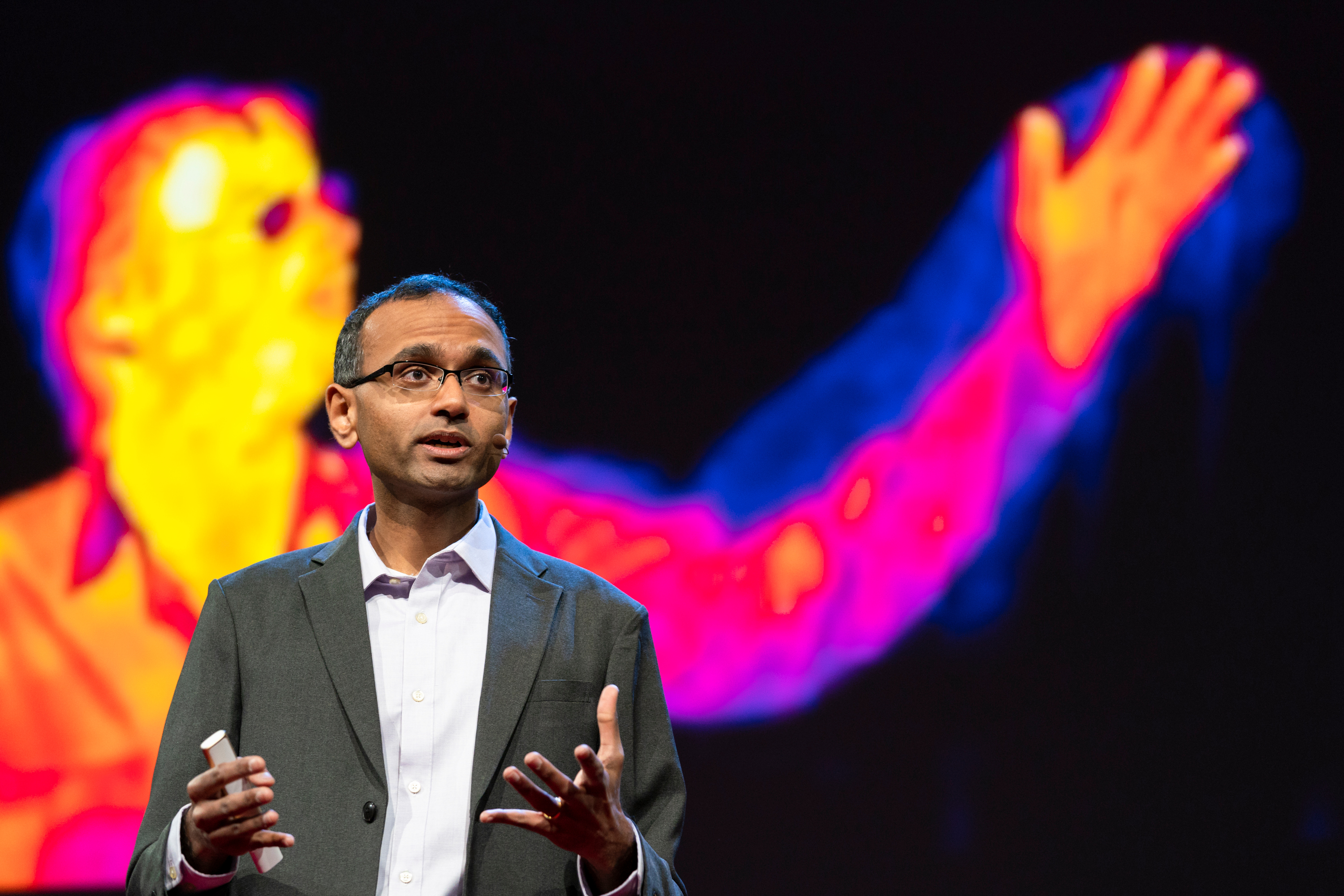 Warm objects (like the guy in the background of this slide) radiate heat, which takes the form of infrared light. Physicist and engineer Aaswath Raman is exploring how to exploit a quirk of infrared light: that some of it escapes our planet and heads out to deep space. Could we use this principle to make better cooling systems, better solar-energy systems, a better planet? He  speaks at TED2018: The Age of Amazement, on April 12, 2018, in Vancouver, BC. Photo: Bret Hartman / TED

There’s a particular occupational hazard associated with covering TED conferences: having your mind blown. University of Pennsylvania physicist and applied engineer Aaswath Raman does just that with his rethinking of air-conditioning. Now, as anyone who’s ever escaped to the movies on a scorching day can attest, sitting in a room that has been artificially chilled to Arctic temps can be a wonderful thing. But like so many other wonderful things (think cat videos and deep-frying), humanity has gone a bit overboard on it. Today 17 percent of electricity used worldwide is for cooling systems — which also includes refrigeration — and the systems produce 8 percent of global greenhouse gas emissions. “What keeps me up at night is that the energy use for cooling is expected to grow six-fold by the year 2050,” says Raman. (Note to self: save that fact to chew on during next long solo car drive.) And he adds, “The warmer the world gets, the more we are going to need cooling systems. This then has the potential to cause a feedback loop, where cooling stands to become one of the biggest single sources of greenhouse gas emissions this century.”

But before you consign yourself to an eternity of muggy sleepless nights, Raman is exploring a potential solution. Its roots lie in a physical phenomenon that many of us have experienced: walking outside on a cool morning when the temperature is several degrees above freezing — and seeing frost on the ground. To explain why this happens, says Raman: “Think about a pie cooling on the windowsill — for it to cool down, its heat needs to flow to something cooler, namely the air that surrounds it. As implausible as it may sound, its cold is actually flowing to the cold of space.”

Whoa — we’ll give you a moment to push your brains back into your head.

Objects emit their heat as infrared light, something you can see with a thermographic, or heat vision, camera. The heat goes up to the atmosphere, which absorbs some but not all of it. At a certain window in the infrared spectrum, the heat escapes to a place that’s much colder than the Earth and our atmosphere: deep space, which can be -454 degrees Fahrenheit.

Night-sky, or radiated, cooling has long been familiar to meteorologists and scientists, but its power has never been fully exploited, in part because it’s counteracted much of the day by the sun. So Raman has designed an artificial multilayer optical material that effectively harnesses this process (fun fact: it’s 40 times thinner than the typical human hair). The material emits heat at the precise wavelengths in which our atmosphere lets out heat the best and it also thoroughly reflects sunlight so it can be used during the day. It is, as Raman puts it, “a material that’s colder than its surroundings, even though the sun is shining on it.” In field trials, attaching panels made from the material to an air-conditioning unit boosted its operating efficiency by as much as 12 percent. By integrating the panels with energy-efficient cooling systems, Raman speculates we could reduce energy expenditures by up to two-thirds. He hopes to test it in commercial settings over the next few years.

But hold onto your head — that’s not all. “We can use the cold darkness of the universe to improve the efficiency of every energy-related process here on Earth,” declares Raman. For example, he says these principles and materials could be used to cool and improve solar cells, which become less efficient as they heat up during use.

And Raman is thinking of still greater possibilities. Perhaps we could turn the vast temperature differential between the earth and space into a sort of “heat engine,” a nighttime power-generating device that could work when solar power doesn’t (and requires no electricity at all). He ends his talk by throwing down this intellectual challenge: “We’re constantly bathed in infrared light; if we could bend it to our will, we could profoundly re-imagine the flows of heat and energy that surround us. This ability, coupled with the cold resource of space points us to a future where we, as a civilization, might be able to more intelligently harness our thermal energy footprint at the very largest scales.”