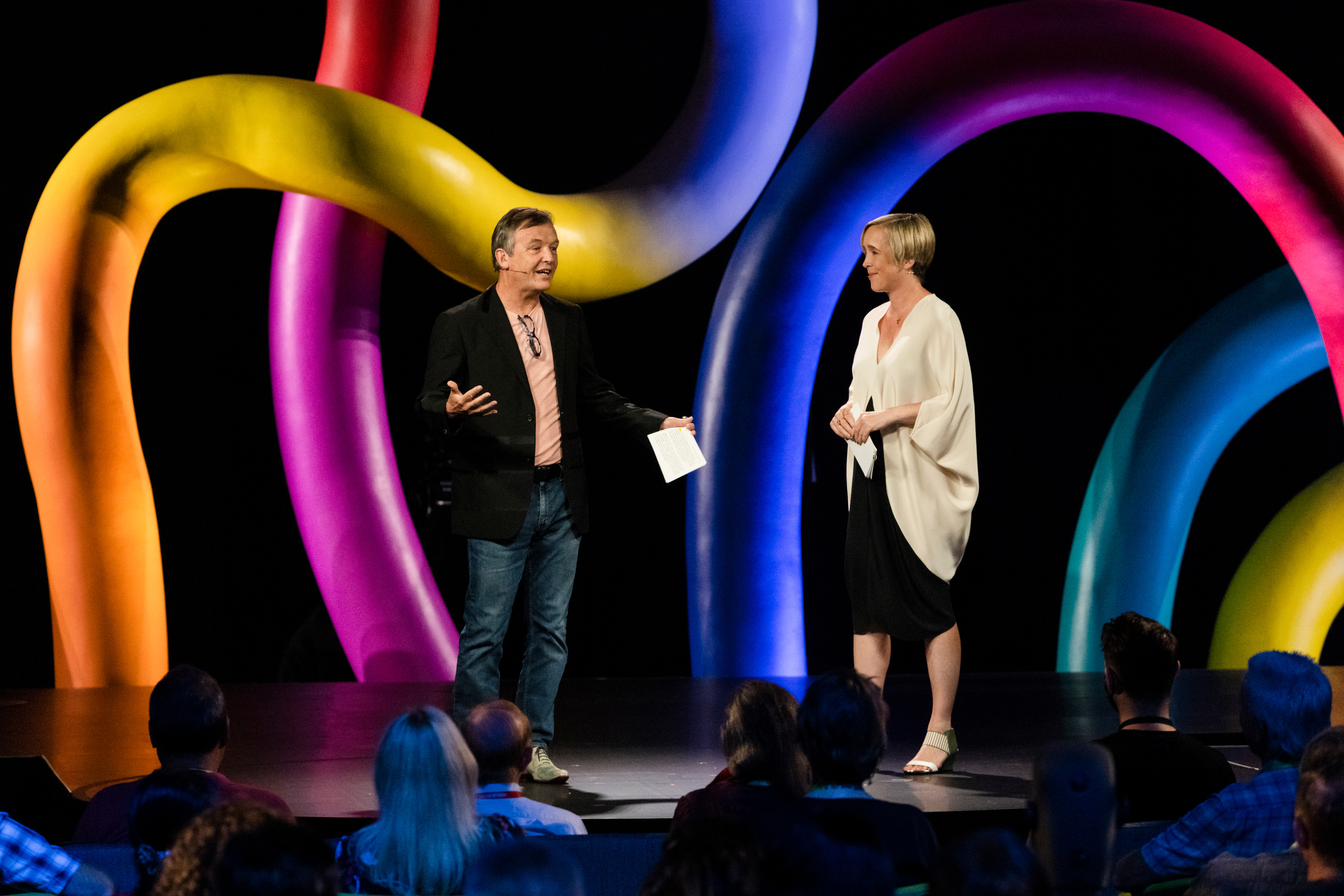 After the world was rocked by the worst health crisis in a century, we gather for TEDMonterey with a bold theme in mind: the case for optimism. It’s grounded in the stubborn belief that green shoots of hope and progress are sprouting throughout the world, if you just know where to look. In this opening session, five speakers and one performer dream up ways to build a better, wiser world and collectively find the path forward.

Music: A gorgeous rendition of “I Can See Clearly Now” from singer and Broadway star Tyrone Davis, Jr.

Big idea: Cynicism is a trap that poisons our lives. Empathy and optimism can help us move on the path forward.

How? Nowadays, it’s hard to be optimistic. But focusing on the negative side of things can find you stuck in a cynicism trap, says Jamil Zaki. Drawing on years of research at the Stanford Social Neuroscience Lab, he shares some revealing insights into cynicism. By believing life is a zero-sum game — where some people need to lose for others to succeed — cynics become distrustful of people and more competitive over time. They tend to pass on their suspicions and distrust to those around them, including their children, and end up perpetuating a culture of negativity that actually becomes the reality they’ve always feared. Some people might argue that cynics see the world as it is and are smarter than optimists — but that’s not true, says Zaki. Research has shown that optimists are actually more intelligent, more savvy and make more money than cynics. So how do you break out of the cynicism trap? It’s hard, Zaki admits, but swapping negativity for empathy and hope can allow you to tell a different story. Pointing to his research, he explains that reframing problems through an empathic lens can actually win people to your side, allowing you to be more persuasive — and better able to create the kind of world you’d actually want to live in. 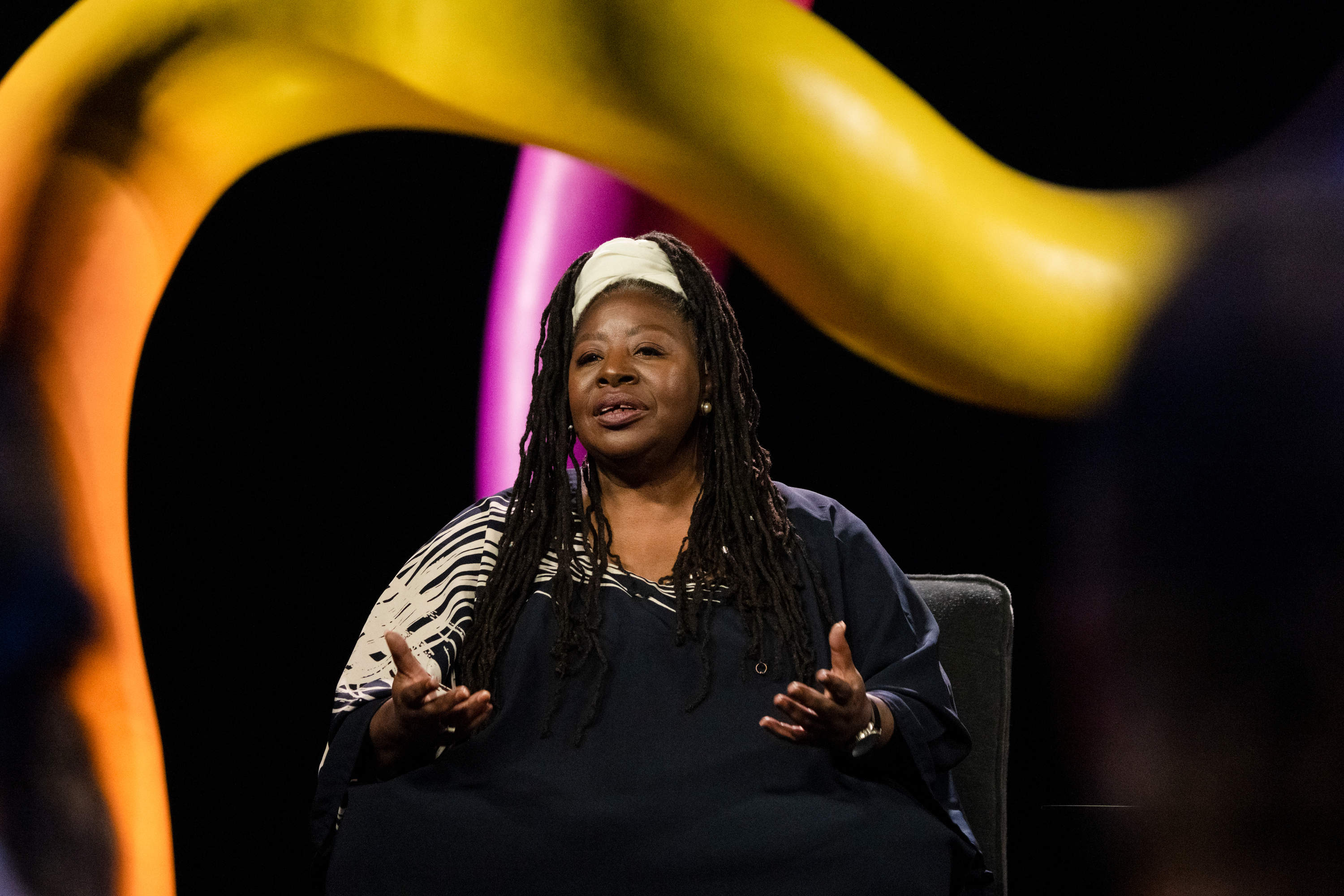 “Fighting hate should be fun,” says public intellectual Loretta J. Ross. “It’s being a hater that sucks.” She speaks at TEDMonterey: The Case for Optimism on August 1, 2021 (Photo: Bret Hartman / TED)

Big idea: Instead of calling people out, we need to call them in.

How? We live in a call out culture, says Loretta J. Ross. You’re probably familiar with it: the public shaming and blaming, on social media and in real life, of people who may have done wrong and are being held to account. The problem with calling people out, though, is that it comes from a place of anger and shame — leaving the receiving party feeling attacked, defensive and unlikely to change. The alternative, Ross says, is to call people in (a phrase originated by community organizer Loan Tran). In this case, you still aim to hold someone accountable for a wrongdoing, but you choose to come from a place of love and respect. For instance, you might respond by saying, “That’s an interesting viewpoint. Tell me more.” This is an invitation to a conversation, Ross says, instead of a fight. Ultimately, calling in achieves three things: 1) it makes space for the other person to grow; 2) it enlarges your capacity for forgiveness; and 3) it may unexpectedly bring friends, family and even strangers into your world, despite your disagreement on many issues.“Fighting hate should be fun,” Ross says. “It’s being a hater that sucks.”

Big idea: By building fictional worlds through virtual simulations that remain grounded in real-life science, humanity can learn valuable lessons to help us navigate through the potentially disastrous scenarios lurking among our possible futures.

How? Welcome to Planet City, an urban simulation like no other — a speculative cybercity with 10 billion inhabitants, which is (not coincidentally) the projected population of the earth in 2050. What would such a city look like, and how would its citizens survive and thrive? Inspired by a simulation proposed by Edward Wilson, which imagined a world where human development is constrained to half the globe, Planet City goes one step further and imagines all of humanity within a single city, leaving the rest of the globe to nature. Within Young’s thought experiment, we can imagine solutions to imposing problems like climate change, model green energy infrastructure and reinvent our food sources — and give ourselves a sense of hope before it’s too late. 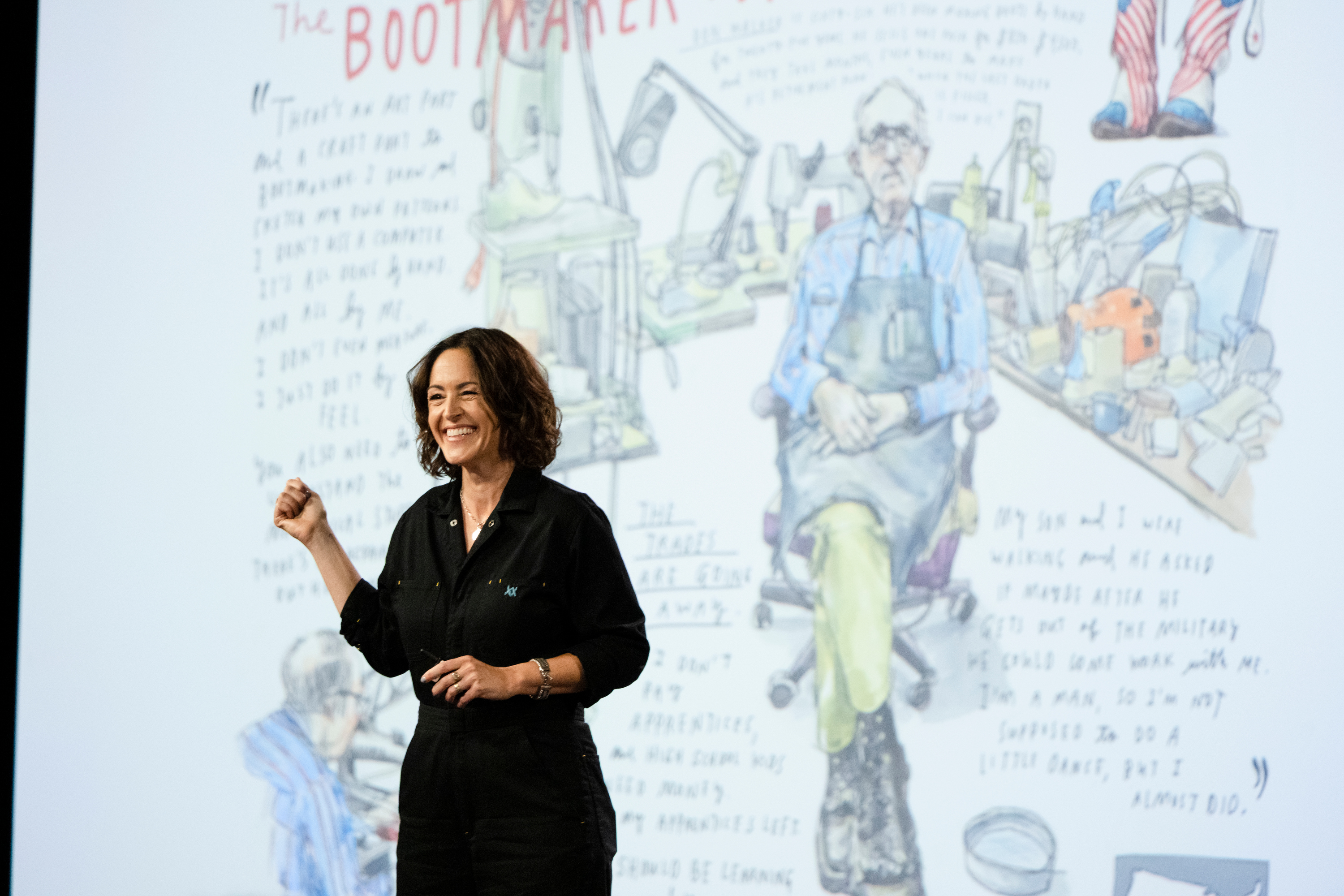 Graphic journalist Wendy MacNaughton talks about how drawing can spark deeply human, authentic connections — and invites the audience to participate in an interactive illustrating experiment. She speaks at TEDMonterey: The Case for Optimism on August 1, 2021 (Photo: Bret Hartman / TED)

Big idea: Drawing is the gateway to slowing down, paying attention and falling back in love with the world and everyone in it.

How? Much of what we see is our expectations — our brains are so busy trying to process endless information, they rely on patterns as a kind of shorthand and, as a result, we miss out on a lot of the depth and detail of the world around us. As a graphic journalist and trained social worker, MacNaughton shares the beautiful, deeply human and authentic connections drawing creates between the artist and subject — and invites the audience to see the world anew with an interactive experiment anyone, anywhere can do. Ready? First, grab a pencil, a piece of paper and someone (new or familiar). Let go of being perfect, embrace the art of being and begin with only two rules as your guide: never lift the pencil from the paper and don’t look down at what you’re drawing. And when you’re done, find joy and delight from your creations! When MacNaughton taught drawing lessons to children during the pandemic, she saw firsthand how drawing unlocks the brain and transforms it into a safe space to process not just what we see, but what we feel. And what she instilled in the children then is simple, yet rich: “Drawing is looking, and looking is loving.”

Big idea: Have you found yourself staying up late, joylessly scrolling through your video queue, doomscrolling through apocalyptic news scenarios or simply navigating your day uninspired and aimless? Chances are you’re “languishing,” a psychic malaise that has become all too common after many months of quarantine.

How? Languishing is in many ways the opposite of “flow,” the feeling of being fully present, creative and productive in your chosen vocation. (It’s the feeling of immersion that binging full seasons of less-than-amazing TV shows may approximate, but provides no substitute for the real experience of flow.) Adam Grant suggests three paths out of this trap — mastery, mindfulness, and mattering — which revealed themselves to him during marathon sessions of Mario Kart with his children and brother-in-law. Mastery, the feeling of derailing his opponents with superior skills; mindfulness, complete concentration on his task at hand; mattering, the pleasure derived from creating fun for his family. And while seemingly trivial, this example is in fact profoundly important: it reveals the power of simple events to make everyday differences in our own psyches.