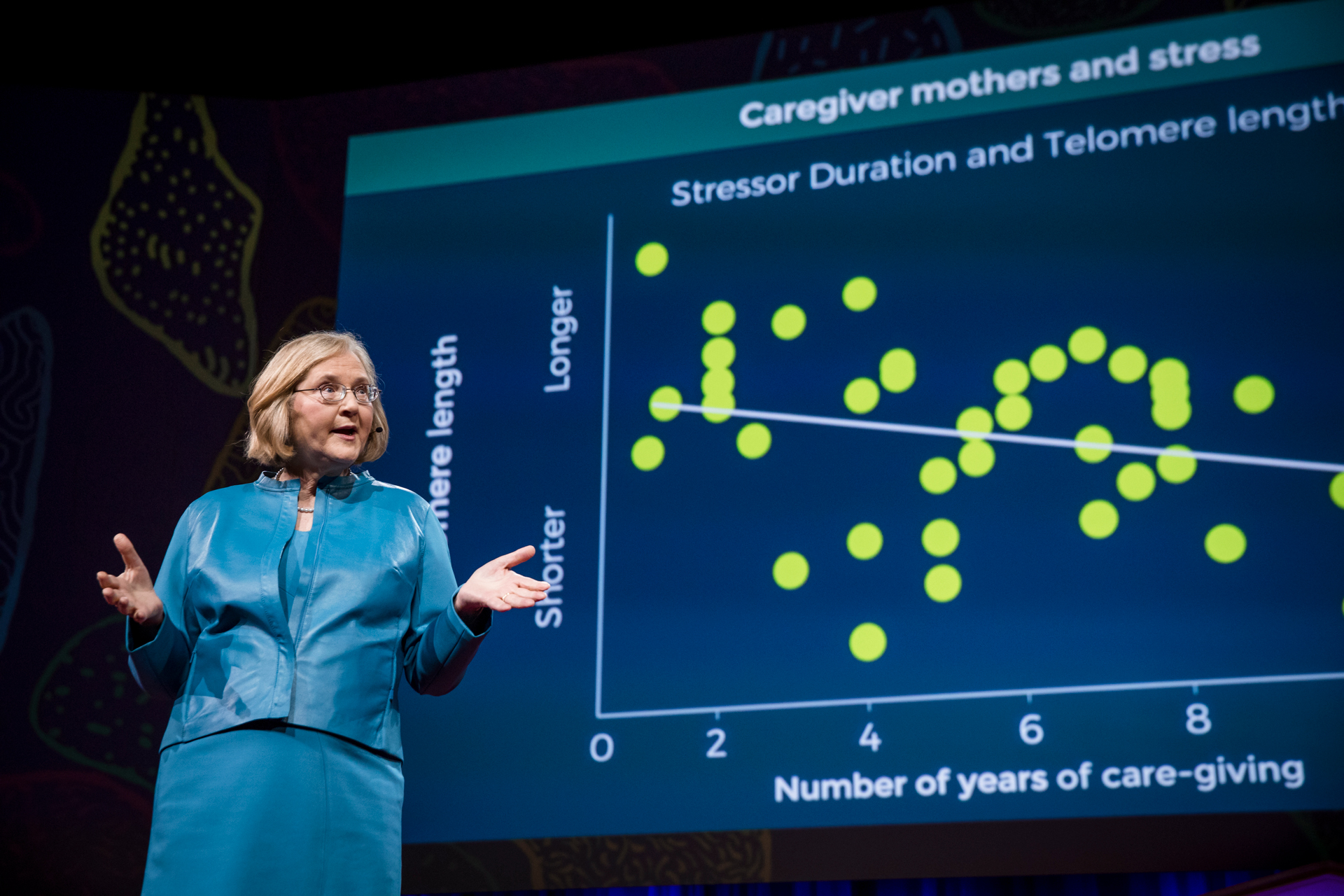 For Nobel Prize-winning biologist Elizabeth Blackburn, it all began with pond scum. She was curious about chromosomes, and specifically the caps at the ends of chromosomes, known as telomeres, and pond scum provided an ample supply for her research. Her curiosity sent her on a journey that shed light on one of humanity’s biggest, and oldest, questions — why and how we age.

Telomeres are special sections of noncoding DNA at the end of chromosomes that, like the plastic tips at the end of shoelaces, protect our coding DNA during cell division. Each time a cell divides, all of its genetic information has to be copied, but due to a glitch in how DNA is copied, telomeres get worn down and shortened. Telomeres help protect our coding DNA from being worn down during cell division by sacrificing themselves. Eventually, worn-down telomeres send a signal to cells that the coding DNA is at risk and it’s time for the cell to die. Based on this research, Blackburn concluded that telomere shortening was simply a fact of aging, but it turned out to be far from the full story.

With colleague Carol Greider, she noticed something strange. Pond scum cells never got old and died. “Their telomeres weren’t shortening as time marched on. Sometimes they even got longer,” she says. “Something else was at work.”

The mystery led them to the discovery of a previously undreamed-of enzyme, telomerase, which helps replenish telomeres. “When we removed telomerase in pond scum, their cells wore down and they died,” she says. In other words, telomerase can slow, prevent or even reverse telomere shortening caused by cell division and, as we’ll see, exacerbated by the stresses of life.

(Warning: unless you mistakenly think at this point that the puzzle of aging has been solved and all you have to do is get your hands on a bottle of telomerase, Blackburn is careful to stress that too much telomerase can actually be a bad thing, increasing your risk of cancer.)

“Our telomeres shorten as we age, and that’s aging us,” says Blackburn. Telomere shortening has been linked to increased risk of cardiovascular disease, cancer, diabetes and Alzheimer’s — the diseases that many of us eventually die of.

However, telomere shortening doesn’t happen at the same rate in everyone. For some, it happens slowly, extending the healthy, productive years of life, what Blackburn calls your “healthspan.” For others, it happens faster, and the disease span — the years of feeling old and sick — comes more quickly.

Blackburn began to wonder whether we had any control over our telomere length — and thus our health and wellbeing. The answer came when psychologist Elissa Epel walked into her lab. Appel studied the effects of severe chronic psychological stress, focusing on caregivers to children with a chronic disorder, and she wanted to know what happened to telomeres in the chronically stressed.

“When she asked about this, I suddenly saw telomeres in a whole light,” says Blackburn, “I saw beyond genes and chromosomes into the lives of the real people we were studying.”

However, “hidden in that data was hope,” says Blackburn. A small group of mothers, despite having cared for their children for years, had managed to maintain their telomeres. “They were resilient to stress,” she explains. They discovered the difference in how the mothers responded to the stress. The mothers with resilient telomeres didn’t experience stress as a threat but as a challenge. “People’s life events and the way they respond to those events can influence how they maintain telomeres,” explains Blackburn.

Intrigued by Blackburn and Appel’s research, other scientists began to explore the mysteries of telomeres, too. The results were astonishing. In one study, researchers found that caregivers of relatives with dementia who practiced meditation 12 minutes a day for two months had a 43 percent boost in telomerase. Others found that emotional neglect, exposure to violence, bullying and racism in childhood all have a long-term impact on telomeres. In contrast, tight-knit communities, lifelong friendships and long-term marriage can protect them.

Reflecting on the remarkable journey that began decades ago with curiosity and pond scum, Blackburn remarks, “Now that you know the power of curiosity to change the world, how will you make sure the world invests in curiosity for the sake of the generations that will come after us?”