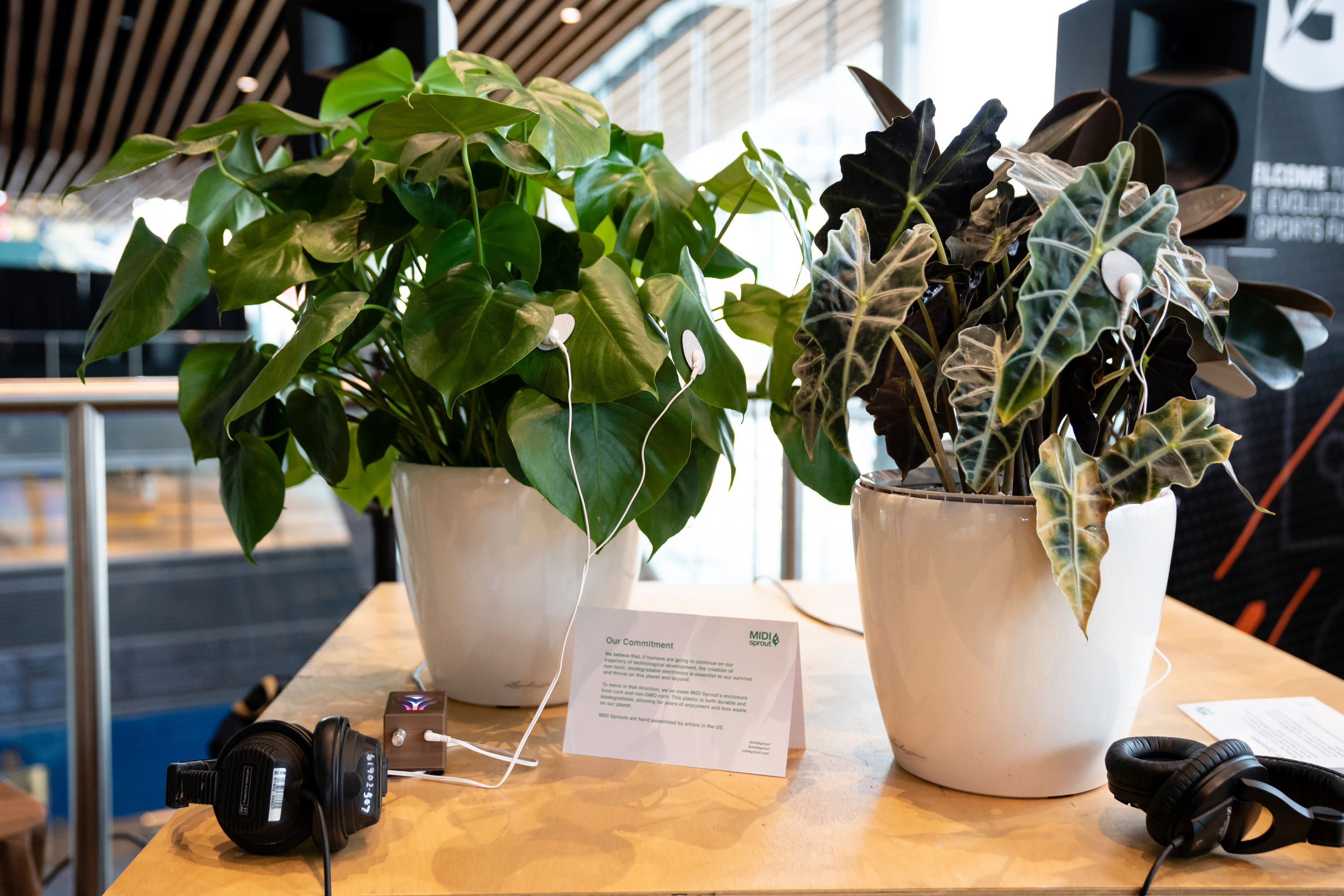 These two plants are part of the Data Garden Quartet, a collection of potted plants that wear special sensors to measure their conductivity — and turn it into music. Data Garden appeared at TED2019: Bigger Than Us, April 15–19, 2019, Vancouver, BC, Canada. Photo: Marla Aufmuth / TED

Barreling through the high-visibility, high-tech exhibits on the TED2019 circuit, you’d be forgiven for mistaking The Data Garden for just another chillout zone, with its oasis of potted houseplants and people lying draped, spaced out, across bean bags. Yet an arresting sound beckons from this unassuming island – a soothing patter of gently percussive gongs, like a harmonious array of meditation bowls or a gamelan, with a variety of textures and tones.

Nothing unusual here – except that if you look closely, the plants have white sensors attached to the leaves, wired into speakers. Wait – is this music coming from the plants?

It is. “We’re listening to Data Garden Quartet – a quartet of plants all playing music together,” says Los Angeles-based sound artist Joe Patitucci. Each plant is fitted with a MIDI Sprout, a device invented by Patitucci and partner Jon Shapiro that translates plant biofeedback into sounds. The white sensors, it turns out, are electrical probes that send a 4.5 volt signal through the plant to measure variations in the plant’s conductivity, which changes according to the amount of water moving through it.

“It’s very similar to technology used in a lie detector,” says Patitucci. “If you imagine the wave in a lie-detector readout, we translate that into pitch in a musical scale. Changes in the waves also control various textural aspects of the sounds, or ‘instruments.’”

Patitucci conceived the idea of Data Garden Quartet in 2012 out of a sense of exploration as a musician. “I’d hear about people who could reached this flow state, where it was like universe was expressing itself through them. I was never able to get to that state – but I’d get my inspiration by going out into nature and bringing the feeling back into the studio and then composing.” So rather than making his body the channel – “instead of expressing itself through my body on my fingertips on a guitar” – Patitucci cut the middleman and wired his source of inspiration directly into the instrument, working with an engineer. Meanwhile, Patitucci designed the sound set – a palette from which the plant selects every single note in real time.

The installation not only proved popular at festivals and museums, soon artists and musicians began demanding the hardware itself. In 2014, he and Shapiro launched a Kickstarter for a version of the hardware, which they dubbed MIDI Sprout, made specifically for artists, which plugs directly into a synthesizer so they can create their own sound sets. (Could I, for example, attach little samples of Prince songs to the plant’s dataset? “Prince Remix by DJ Plant,” Patitucci affirms.)

Inevitably, demand snowballed to ordinary consumers who wanted MIDI Sprout in their home – in their yoga class, meditation studios, and so on. For them, MIDI Sprout is now available as an iOS app with a custom-made sound palette that includes harp, flute, and bass. Now anyone can turn a houseplant into an ambient music generator.

In case you’re wondering, MIDI Sprout doesn’t only work on plants. You can hold the electrodes and get sonic feedback on your own biorhythms. “If you can really relax and have a steady pressure on the probes, you can get it to play one note,” says Patitucci. “You can even get it to stop. It takes some practice.”

As for the question I know is burning in readers’ minds: “Can I put a MIDI Sprout on my cat?” The answer is here. 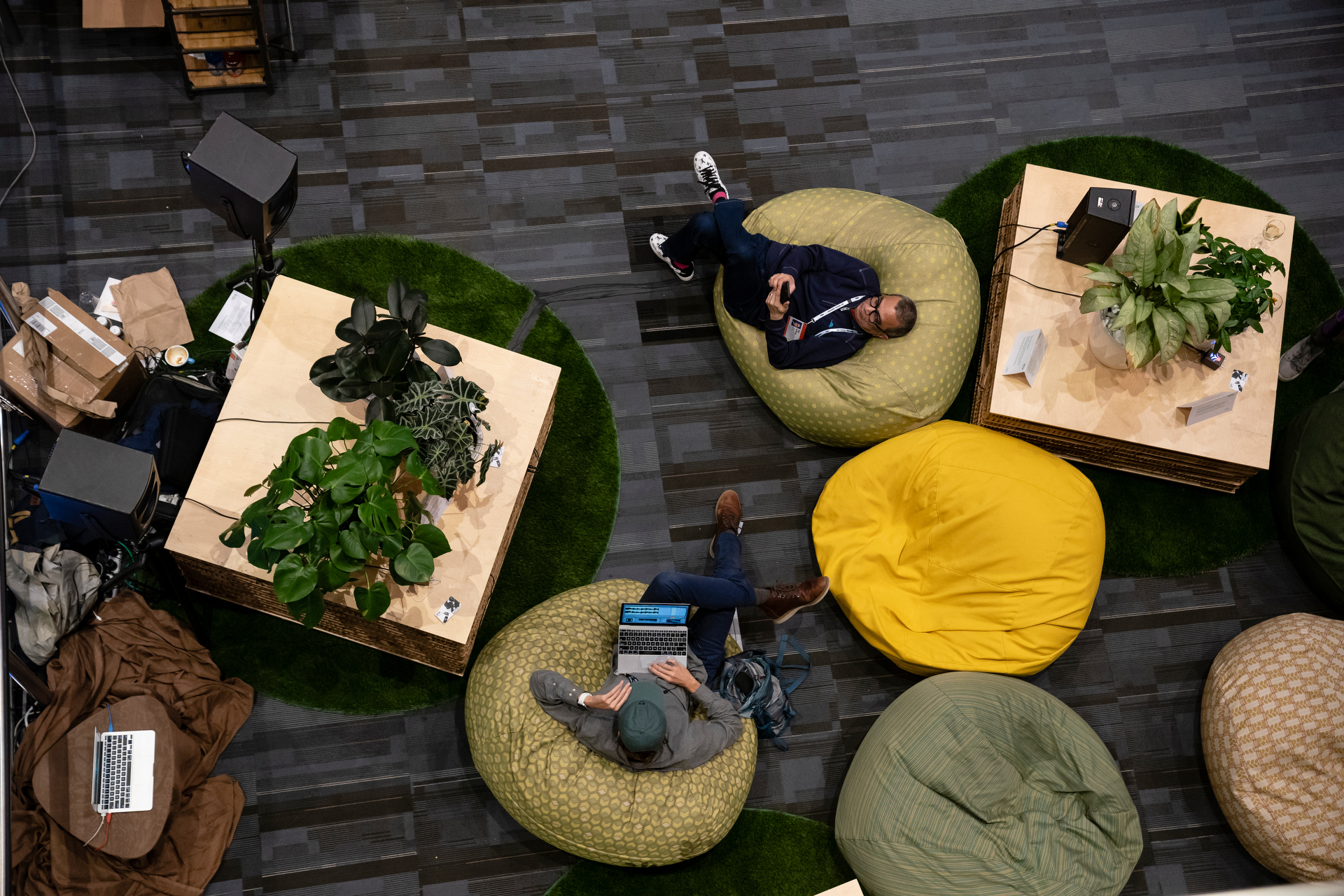