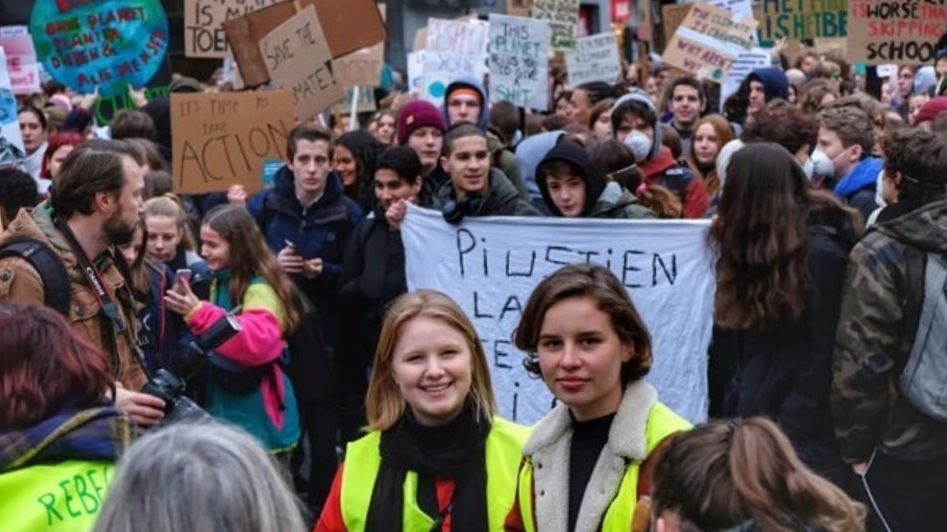 One of anthropologist Margaret Mead’s most famous quotes instructs us: “Never doubt that a small group of thoughtful, committed citizens can change the world: indeed, it’s the only thing that ever has.” We might amend Mead’s observation to honor a group of thoughtful, committed teenagers across the world who are standing up for their lives (and their future lives) in extraordinarily powerful and moving ways.

Valentine’s Day marked the one-year anniversary of the Marjory Stoneman Douglas High School massacre in Parkland, Florida. In the aftermath of that tragic shooting that claimed 17 lives, surviving students rejected their representatives’ “thoughts and prayers” and organized a nationwide school walkout on March 14, 2018. Ten days later, the March for Our Lives drew over a million people from around the country to Washington to rally for safe schools and gun control. And the Parkland students have continued throughout the year to travel this country and the world, advocating for stricter gun regulations.

In Sweden, a teenage girl named Greta Thunberg observed the actions of the Parkland students and took an action of her own: deciding to skip school every Friday in order to lobby the Swedish government into action on climate change.

Since Greta began her solo protest, it’s estimated that more than 70,000 students around Europe and the world have joined her protest each week, in over 270 towns and cities. Pictures of Greta and other young activists have made their way around on social media (Greta has nearly 300,000 followers on Instagram), inspiring other teens to join her in protest.

Strikes have been organized all over Europe, the United States, India and Australia over the past five months. The movement is notable in that it is being led by teenage girls. Katrien Van der Heyden of Brussels, whose 17-year-old daughter, Anuna de Wever, organizes marches there, observed to BuzzFeed: “’It’s the very first time in Belgium that a [mass movement was] started by two women and not about feminist rights.’ When the protests drew tens of thousands, Van der Heyden said, she was stunned to see as many boys as girls in the crowds, “and yet no one ever challenged the leadership of the female organizers.”

Seventeen-year-old Jamie Margolin, the founder and executive director of Zero Hour, a group organizing the US protests for the International Day of Action planned for March 15, told BuzzFeed that climate activism has given young women a chance to be heard.

“’There aren’t very many spaces that I can be in charge of, and what I’m going to say is going to be heard,’ Margolin said. Her group is led largely by young women of color, which she said should come as no surprise, because people who are already vulnerable are going to be disproportionately hit by climate change.”

Recently, TED posted Greta’s TEDxStockholm talk which she gave in November. Her talk has been up three weeks and has already been viewed over 1.2 million times. In it, she explained why she decided to skip school and protest, saying:

At the end of her talk, Greta says she’s not going to end on a positive, hopeful note, like most TED talks.

“Yes, we do need hope, of course we do. But the one thing we need more than hope is action. Once we start to act, hope is everywhere. So instead of looking for hope, look for action. Then, and only then, hope will come.”
— Greta Thunberg

As I observe Greta and Jamie and all the other girls taking up leadership and the young boys who are marching and protesting with them,  no longer waiting for some adult with a plan or for corporations or governments to take actions, but creating their own actions, I feel more hope than I have felt in a long time that we — all of us at every age — will also take up actions to address the climate crisis before it’s too late.

My daughter in law, Laura Turner Seydel, signs off every email with the Native American proverb: We do not inherit the earth from our ancestors, we borrow it from our children. The world’s children are reminding us that we have a big debt to repay and an earth to repair and restore. Time’s up on our loan of the earth.