A powerhouse coalition will change the way vaccines are made — and help us prep for the next global outbreak. (Because it’s not if but when.)

One of the cruelest ironies of the recent Ebola outbreak: There was a promising Ebola vaccine already, sitting in a Canadian lab, awaiting human trials — the last step away from being approved to use on people. But development had stalled in 2010, and it wasn’t ready to use.

“Why is it that the Ebola vaccine wasn’t fully developed at this point?” asked vaccine advocate Seth Berkley in March 2015 on the TED stage. “Mainly because of the financial risk in developing it. The sad reality is, we develop vaccines not based upon the risk the pathogen poses to people, but on how economically risky it is to develop these vaccines. Vaccine development is expensive and complicated.”

As he concluded, “There’s a complete market failure. If we want vaccines, we have to provide incentives or some type of subsidy.”

Last Thursday, January 18, at the World Economic Forum in Davos, Switzerland, Berkley saw the launch of exactly that: CEPI, the Coalition for Epidemic Preparedness Innovations, a fund from a coalition of countries, labs and foundations that will create incentives for academic and industry labs to create and test vaccines, and will help form global partnerships that will speed reaction times. The first $460 million of backing comes from founding partners including the governments of Norway, Germany and Japan, the Wellcome Trust and the Bill & Melinda Gates Foundation; other nations and groups are poised to join. The organization expects to raise the full $1 billion that it needs for the next 5 years by the end of 2017.

The first targets will be the MERS-CoV, Lassa and Nipah viruses.

In an email to TED after the launch, Berkley calls this fund “exactly the type of initiative I called for in my TED Talk.  It was also set up well by Bill Gates as he did the epidemic talk right before mine.”

Watch this clip of Bill Gates at the CEPI announcement:

Berkley shares more details: “I participated in the Davos launch today and am excited that CEPI could be put together and funded over the last year. It brings together companies — both large multinational vaccine companies and small biotech companies — to pursue two goals: First, to create some vaccines for known pathogens that are at risk of epidemic spread.  They will be produced and go through early-stage testing and then will be stored to be immediately ready for response to an outbreak.  Second will be to develop, test and validate platforms that could be used for novel agents that might appear as part of an outbreak. These will allow us to be much further prepared to move quickly if a new pathogen appears.”

Berkley runs Gavi, the Vaccine Alliance, which was launched at the WEF in 2000. “Gavi has immunized 600 million addition kids, changed the marketplace for vaccines and prevented more than 8 million deaths,” he notes. (The WEF-Gavi partnership was highlighted at the main entrance to this year’s forum.) 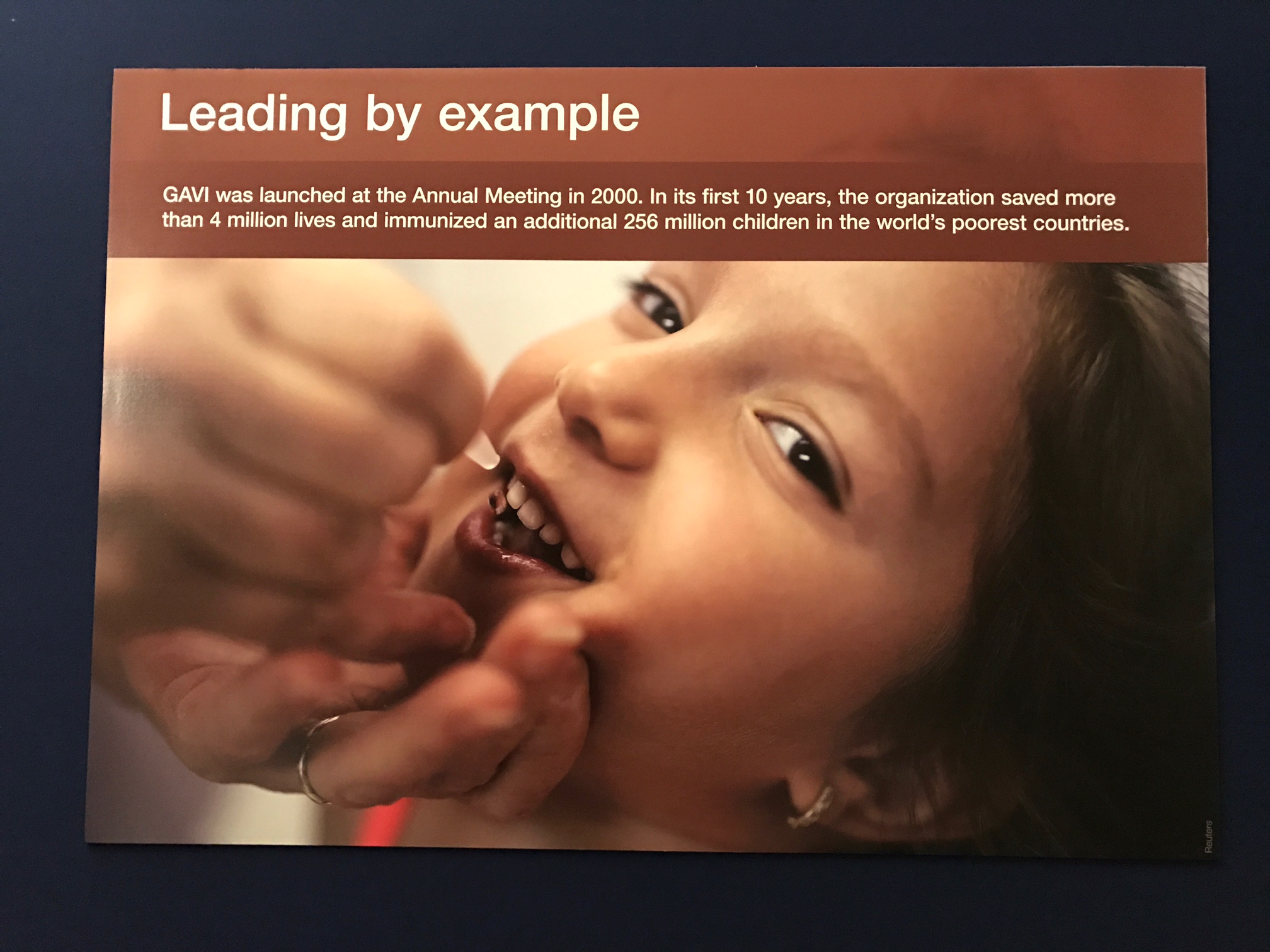 Seth Berkley runs Gavi, the Vaccine Alliance, which launched at Davos in 2000 and was featured this year at the main entrance to the event, as seen in this image above. This year, the CEPI launch is counted among the top 10 achievements at Davos 2017. Image courtesy Seth Berkley.

His group will work closely with CEPI, he says, “with the idea that if useful vaccines are produced for diseases of epidemic importance, Gavi could purchase doses for a stockpile so that the world is prepared if outbreaks occur.  This work can be seen as global insurance against the evolutionary certainty of future infectious disease outbreaks.”

“Of course, I am also happy to report that there are 300,000 doses of the Merck VSV-Ebola vaccine available if there are outbreaks in the interim, and Merck has agreed to submit the vaccine for regulatory approval by the end of the year.  Gavi will then set up a formal stockpile.  This vaccine had a 100% efficacy rate in trials in Guinea.  So one of the two experimental vaccines I held up on the TED stage is now a reality.”

“I think this is a great example of TED highlighting a global problem worthy of a new idea.  That idea being socialized, leading to a new paradigm that can make a real difference in the world.“