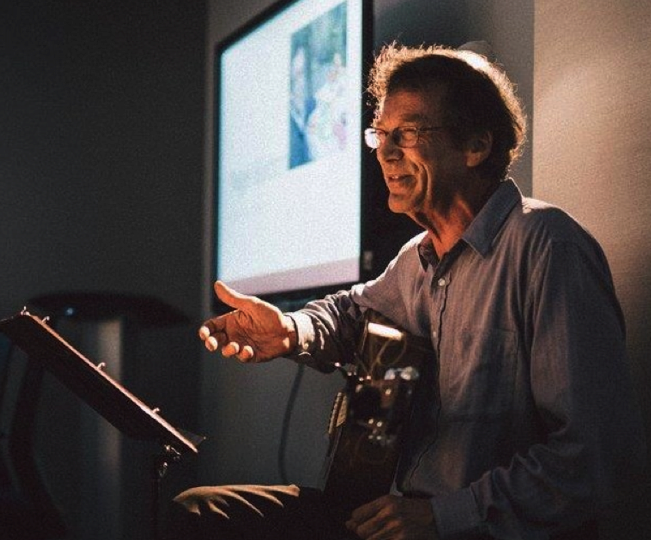 Many people feel a burst of inspiration after watching a TED Talk. Some take action by volunteering their time or making a donation. Nigel Gordon, on the other hand, has an individual reaction: He writes songs about TED Talks he loves.

A singer and songwriter, as well as an entrepreneur, Gordon got his introduction to TED when a friend sent him Sir Ken Robinson’s “How schools kill creativity.” “I’ve been a TED addict ever since,” he says.

In 2012, Gordon heard Sugata Mitra’s talk “The child-driven education,” which tells the story of what happened when Mitra embedded a computer in a wall in a slum in India, and came back to discover that kids had used it to teach themselves a wide range of subjects. (Mitra would go on to win the 2013 TED Prize for his idea, the School in the Cloud.) Gordon was captivated by this idea.

“Through a potent mix of curiosity and self-organized teamwork, the kids taught themselves to use the computer and, with it, to broadly educate themselves,” says Gordon. “My takeaway: Curiosity drives learning.”

He picked up his guitar and wrote the song “Curiosity.” It starts: “Curiosity killed the cat / I want to die like that.”

.
Speaking of death, Gordon was also very moved by Stephen Cave’s talk, “The 4 stories we tell ourselves about death.” It inspired him to write “A Good Story.” This was a challenging one, however, because Gordon wanted to infuse the heavy subject with the same sense of humor that Cave brought to the stage. Also, Gordon just wasn’t sure how to end the song. “I finally realized I could end it the same way that death ends life: instantly. So I incorporated an abrupt flash-ending,” he says. “The song just … stops.”

.
Most recently, Gordon found himself moved by Ziauddin Yousafzai’s talk, “My daughter, Malala.” He already knew the story of the 2015 Nobel Peace Prize winner, but hearing from her father was devastating, he said. A few days later, he happened to watch a talk by Karima Bennoune, in which she pointed out that extremists like Osama Bin Laden are household names in the West, while people like Malala are not as well known. Gordon decided it was time to start writing again. “Ma-la-la. Her name itself is pure music,” he says.

.
Gordon has a vision for this song—he’d love to record it with a group, “We Are the World”-style. “My dream: that the ‘Malala’ song be turned into an anthem, to support Malala’s global, peaceful fight for a girl’s right to an education,” he says.

Gordon admits that he did once attempt to write a song about TED itself, but that this endeavor didn’t go so well.

“I couldn’t manage to personalize the song or to make it a story,” he says. “It ended up more like a wordy PowerPoint presentation.”

But still, he says, his TED-inspired songs are not limited to the three above. “TED Talks have significantly enriched my life and widened my range of interests,” he says. “In that sense, many of my songs written in the past four years reflect the impact that TED has had on me.”