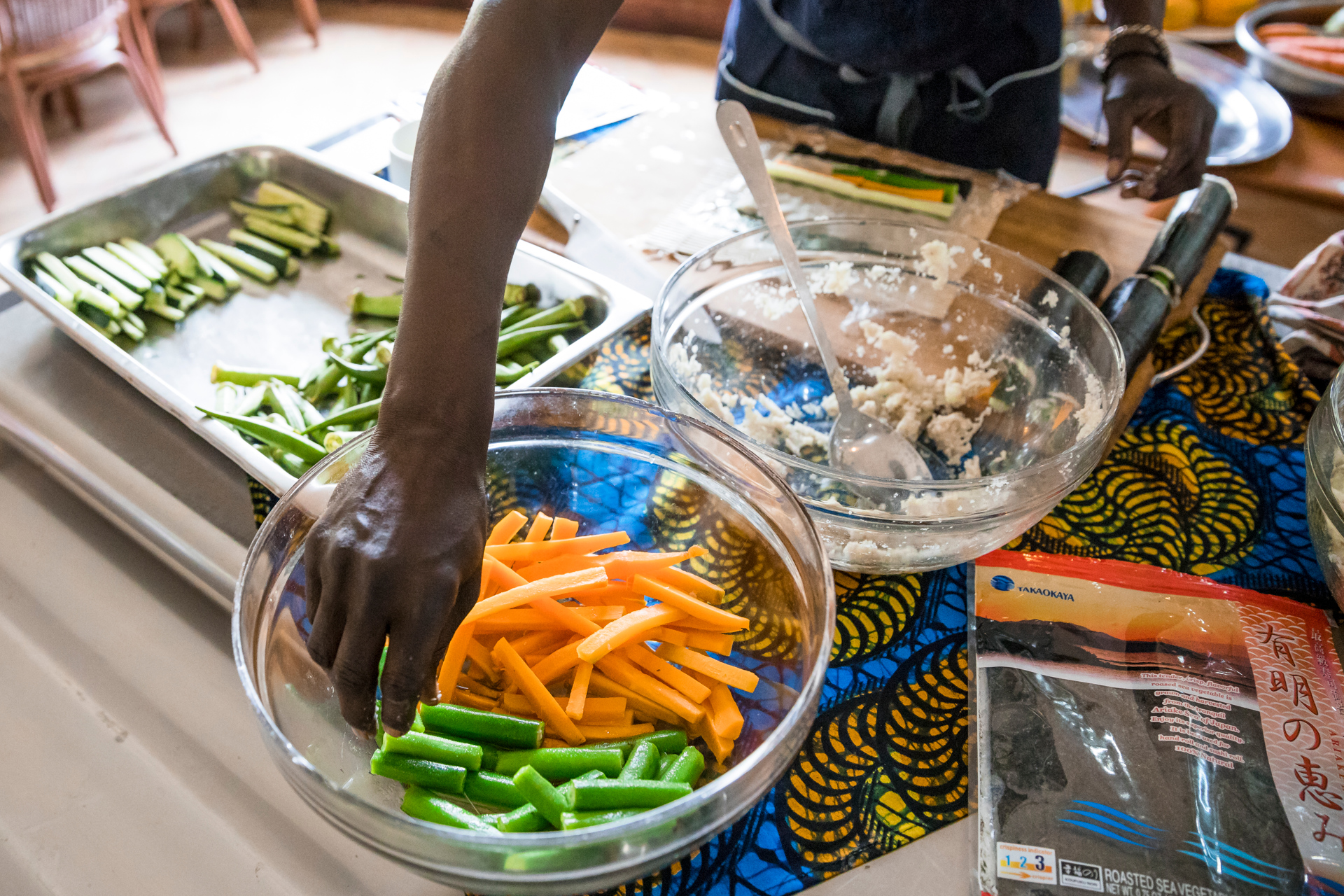 If you’ve seen Pierre Thiam’s TED Talk about fonio, then you saw that part when he actually handed food out to the audience, yes? For those who didn’t know to sit in the front rows to receive that blessing (or couldn’t be there in the first place), and don’t mind rolling up their sleeves in the kitchen, Pierre has shared the recipe and cooking instructions for anyone who would like to re-create his fonio sushi.

No, I haven’t tried it yet, but if you can procure all the ingredients, especially the fonio, obviously, it looks super easy to make! Here we go.

To make Fonio Sweet Potato and Okra Sushi, you are going to need:

In a large bowl, combine cooked fonio, sweet potato and rice vinegar. Season with salt. Lay a bamboo sushi mat on a smooth surface, and lay out seaweed sheet on sushi mat. Using a paddle or your hands, lay out the fonio-sweet potato mixture evenly and thinly, leaving about 2 inches of the seaweed edge farthest from you uncovered. 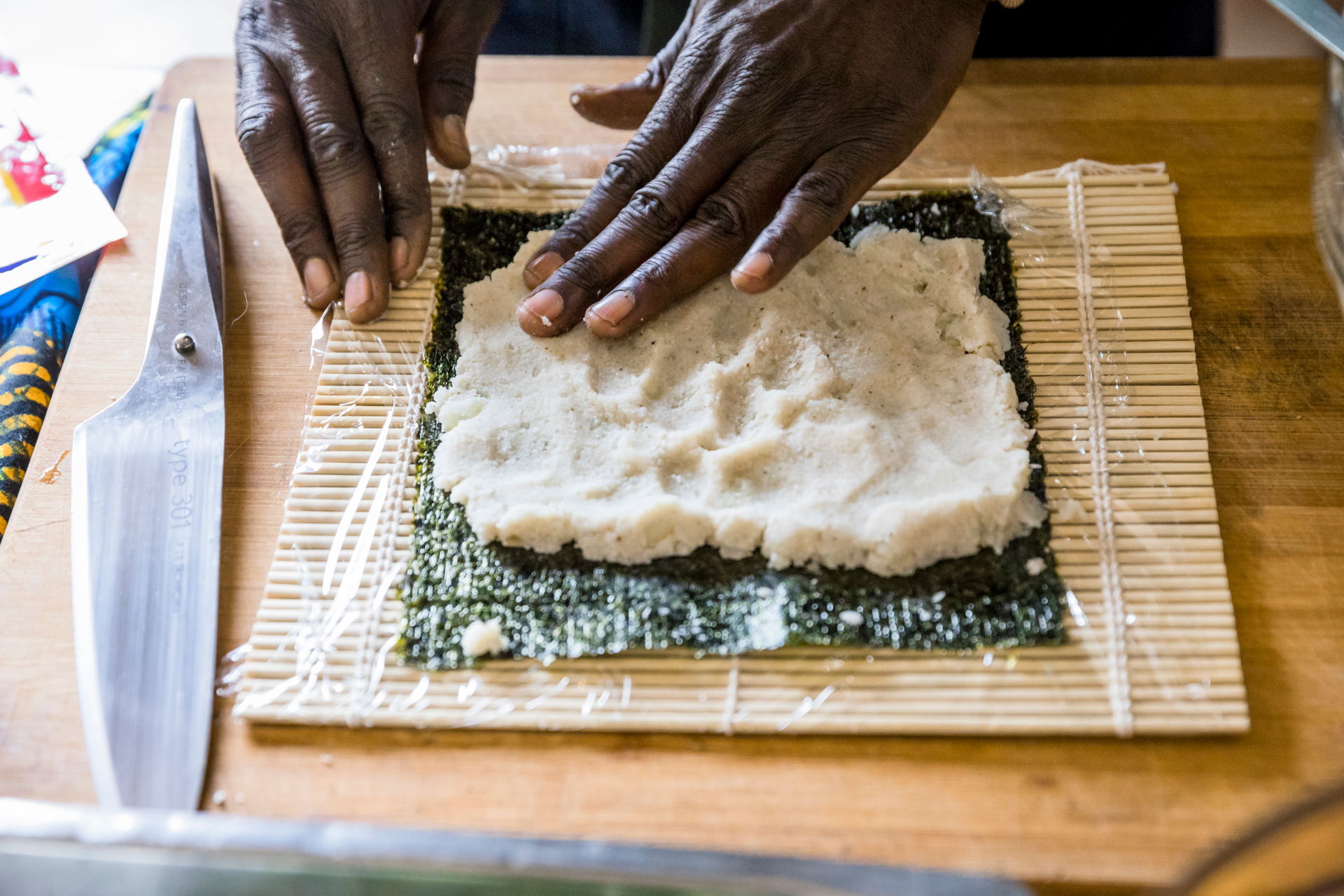 Lay out the fonio mixture evenly on top of the nori rice sheet, leaving space at the far end for rolling. Photo: Ryan Lash / TED

Lay cucumber sticks in a row at the edge nearest you. Lay out a row of carrot sticks next, then a row of okra. Moisten the far edge of the nori with fingers dipped in water. Take the edge closest to you and roll the nori sheet as tightly as possible until you have one complete roll. 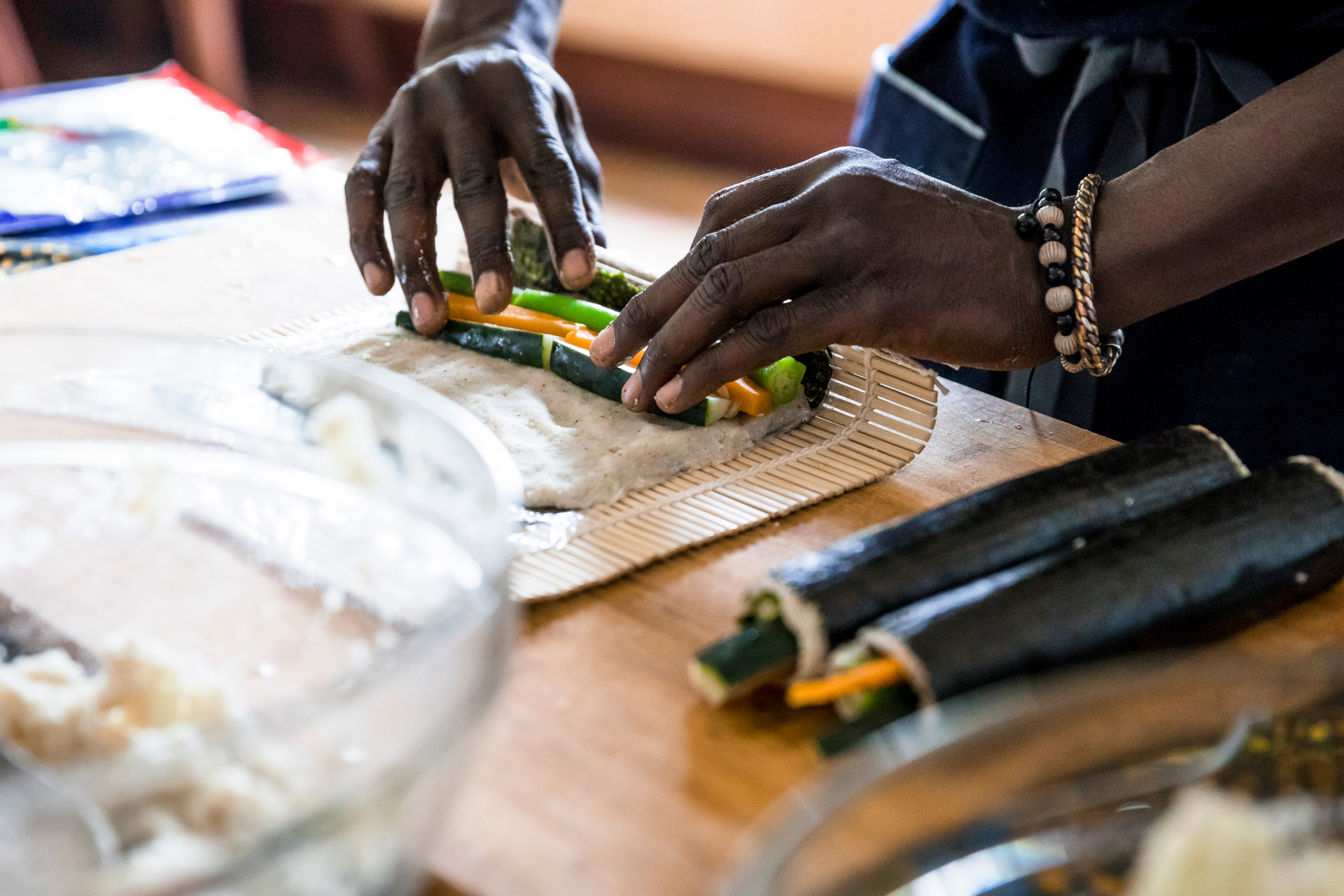 Lay out a row of cucumber, a row of carrot and a row of okra, then carefully roll everything together, using the bamboo mat for support. Photo: Ryan Lash / TED

Press the moistened edge against the roll to seal, and place the roll seam side down. Run your knife under warm water, to prevent sticking, and carefully slice the roll into 6–8 pieces. 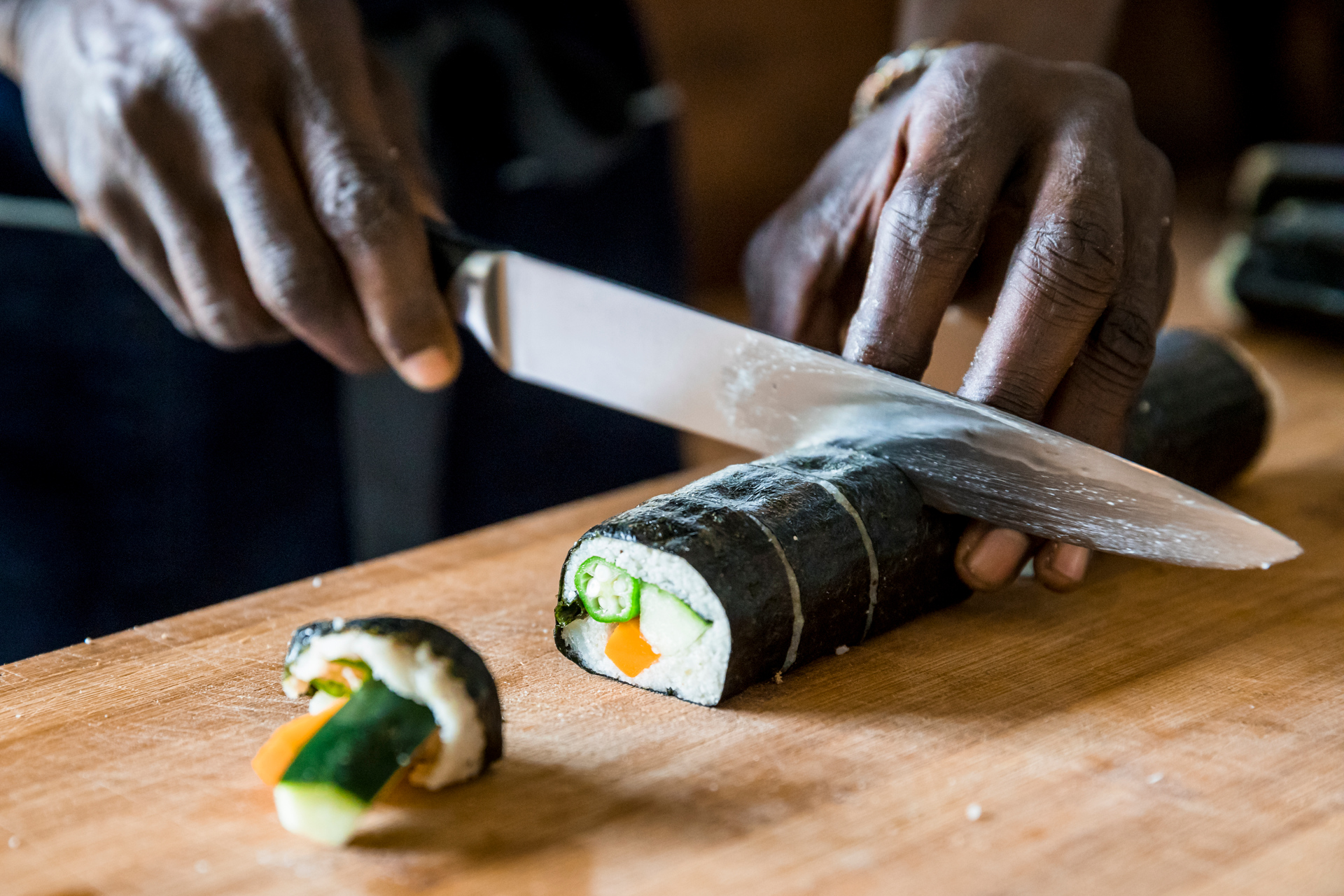 Neaten up the edges, then slice the roll, using a damp knife to prevent sticking. Photo: Ryan Lash / TED

Serve with soy sauce and wasabi, and garnish with spice if you like; when preparing the sushi for the TEDGlobal audience, Pierre used dehydrated dawadawa. This recipe serves four. Enjoy. 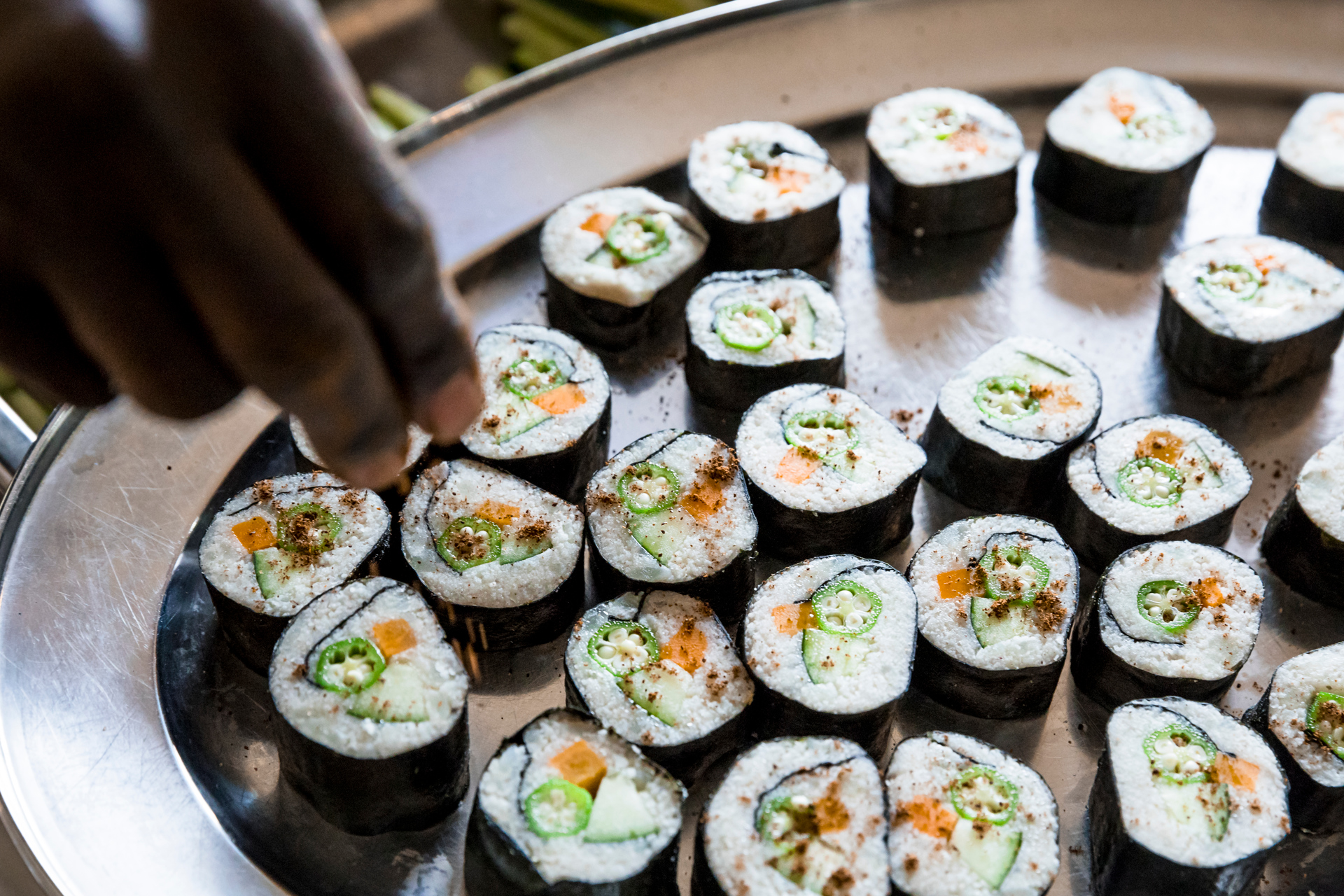