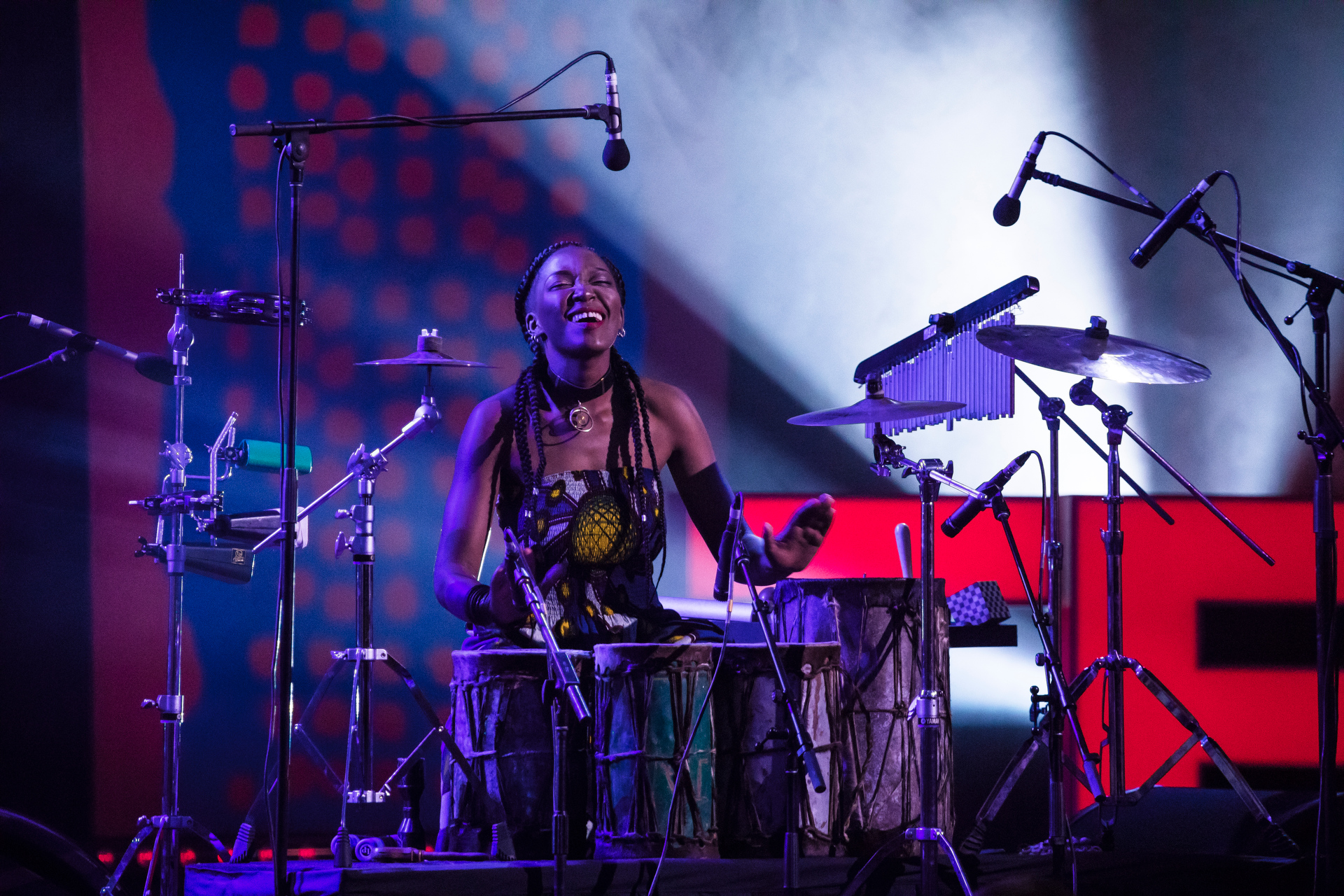 “The politics of joy” is a phrase that resonates through this session of TED Fellows talks. These talks, by and large, come from people who’ve taken a hard look at the world and its problems and decided to engage joyfully, with creativity, fresh insight and heart. From a soccer project that empowers young refugees, to an SMS service for cow farmers, it’s a collection of bold ideas that might make a difference.

First, the music. We begin with a multi-crescendic rumble of drums and percussion from musician Kasiva Mutua (whom we’ll hear from again later).

TED Senior Fellow Su Kahumbu loves cows and chickens and the people who raise them. “We really underestimate the importance of our farmers,” she says, pointing to their key role not only in our food supply but for our global health. She’s devoted herself to bringing small farmers the tools they need to keep learning and to make a decent living. Thus: iCow, an SMS service that shares best practices, reminders and useful data for livestock farmers, even over low-end feature phones. As she says, “Farmers who use the service begin to see improvements in yields, incomes, profits and animal health within only 3 months.”

Marc Bamuthi Joseph is a theater artist who also deeply loves sports. In his latest piece, peh-LO-tah, he says, “I thought a lot about how soccer was a means for my own immigrant family to foster a sense of community and normality in the new context of the United States.” peh-LO-tah leverages sports and movement to help new young Americans find a place to call home — as well as a connection to the global community. Because, as he puts it: “Soccer is the only thing the entire planet can agree to do together. It’s the official sport of this spinning ball. I want to be able to connect the joy of the game to the ever moving footballer, to connect that moving footballer to immigrants who also moved in sight of a better position. Among these kids, I want to connect their families’ histories to the bliss of the goal scorer’s run.”

Joseph’s talk was received with a standing ovation, and not a few shouts of “gooooaaal” from the back.

Next, we watch a video made by TED Fellows and collaborators Ed Ou + Kitra Cahana, who are in the midst of an in-depth reporting project among the Nunavut Inuit people.

Miho Janvier is a solar physicist — or, to make it sound even more awesome, you can call her a solar storm chaser. She studies the solar weather and how it can disrupt life here on Earth, as in March 1989, in the Canadian province of Quebec, when a large solar storm shut down the entire electric grid, disrupting life for thousands of people. How do you study the weather on the sun? Sending up a probe is a nonstarter (it would just fry, obviously) so her work involves a lot of computer modeling, using data from many different space missions to help assemble a clear picture of space weather. The goal: to protect both Earth and any spacecraft we may care to send out there. 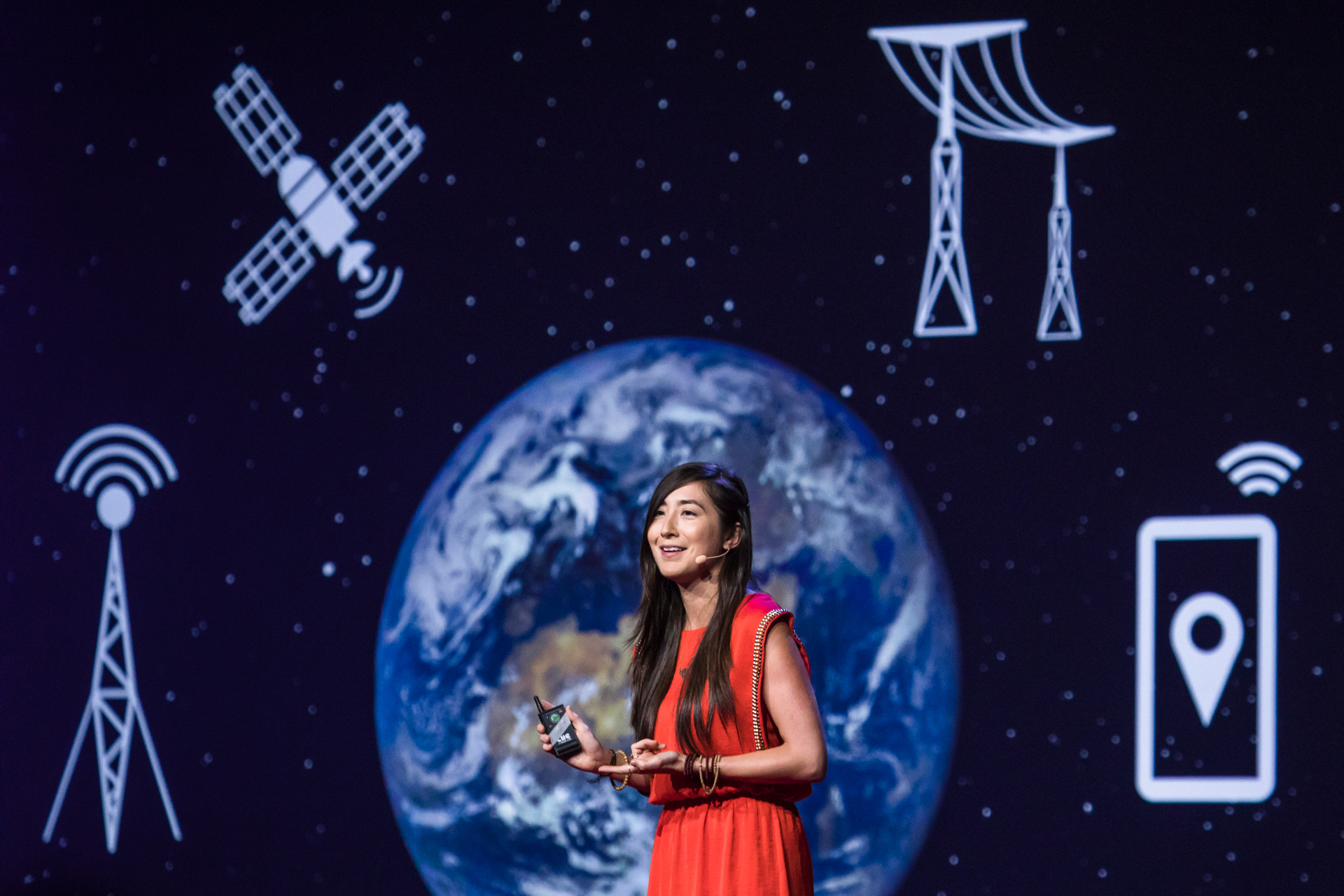 Miho Janvier studies the weather around the sun, and how it affects us here on Earth — disrupting phone calls, playing havoc with electric grids, even tweaking satellites. She speaks at TEDGlobal 2017 on Monday, August 28, 2017. Photo: Bret Hartman / TED

Up till now, she spoke to us with her drums. Now it’s time for her to speak words. Kasiva Mutua is a drummer — and she’s heard some people criticize her for it, for playing an instrument that is so physical, so sensual, so … male. She explains that this taboo “stems from the traditional and psychological belief that the woman is an inferior being.” But as a woman and an African, she feels called not only to drum but to share the continent’s culture of drumming that marks events from childbirth to marriages to burials. Inspired by the need to preserve culture, Kasiva goes fearless, and teaches boys and girls alike the significance of drums. “Women can be custodians of culture,” she says. “My drum and I? We’re here to stay.” Cue thunderous applause.

Imagine falling ill, going to a clinic or hospital, and being unable to communicate with your caregivers. Kyle DeCarlo works to build awareness of the needs of Deaf patients, whose experience in hospitals can be difficult. For instance, imagine you are a practiced lip reader — but your doctor speaks to you wearing a surgical mask? Kyle was born Deaf to hearing parents, and growing up he found that despite hours of speech therapy, and powerful hearing aid technology, he still struggled to communicate. Why? As DeCarlo frames it, people try to solve the wrong problem for Deaf people. They try to give people access to sound by improving their hearing, when they should actually be focused on giving people access to language, to communication. A focus on nonverbal communication will help millions of Deaf kids all over the world, DeCarlo suggests, and it doesn’t take a huge gesture. Sometimes a simple modification, like the FDA-approved semi-transparent surgical masks developed by the team Kyle works with, might make a huge difference to people communicating with their caregivers.

Globally, there are more cancer survivors than ever — in the US, for instance, one in twenty people has survived a bout with cancer. Victoria Forster is one of them, having survived a cancer that struck when she was 8 years old. She asks: What can we learn from this new community of long-term survivors — about side effects, the long-term effects of common treatments, and simply and powerfully, how to fully live?

“There is a renaissance of innovation and technology in Africa,” says Abdigani Diriye. More than 100 incubators, accelerators and hubs have risen in countries like Kenya, Nigeria, South Africa and Rwanda. Inspired, Diriye has started up a business accelerator in his home of Somalia. “There was no precedence in Somalia for a startup culture,” he says, but he’s now trained over 25 startups powered by “the immense talent, drive and creativity of Somali youth.”

Katlego Kolanyane-Kesupile is an international lifestyle writer, musician, performer, a proudly transgender “mainstream, whitewashed, new age, digestible queer.” But in this glossy life, a part of her past was missing — “a rural child lived within this shiny visage of fabulosity.” In a poetic talk, she examines how she’s continually linking up those two parts of her being, a VIP-lounge sophisticate whose roots are in “the little brown-skinned children frolicking in the streets of an incidental railway settlement … or an off-the-grid village, legs clad in dust stockings.” 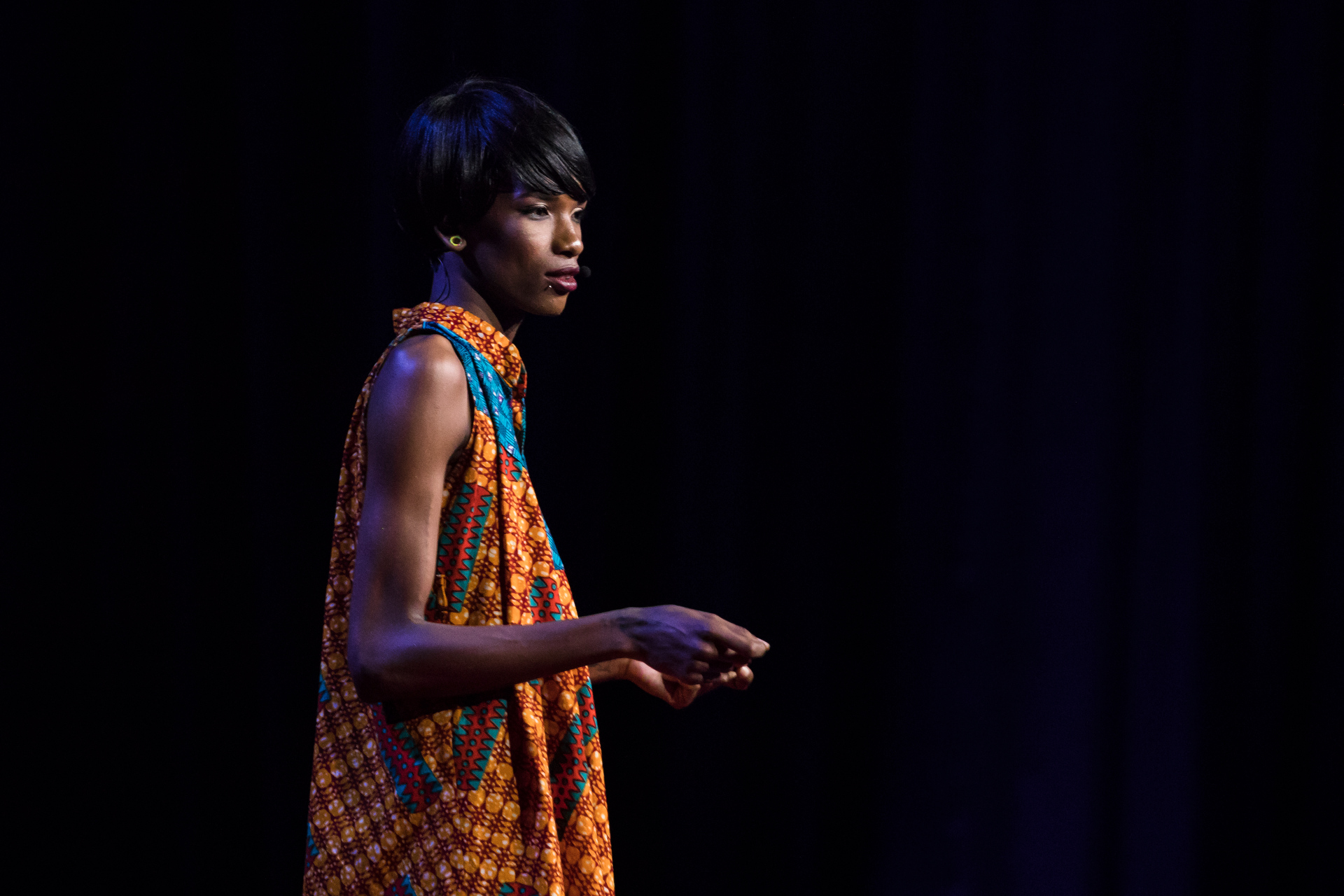 Katlego Kolanyane-Kesupile poetically examines how she links her modern, glossy, VIP-lounge lifestyle with the child she once was in a small dusty village. She asks: Does modernity demand we put aside the child, the villager, the indigenous truth that completes who we are? Photo: Bret Hartman / TED

An unabashed tech-blog reading and Silicon-Valley-podcast-listening nerd, Soyapi Mumba works on creating electronic health records for healthcare providers in Malawi. He realized he couldn’t just use off-the-shelf software, because doctors in Malawi face a few challenges that existing software packages couldn’t handle — such as patients who don’t know their exact birthday, and whose names can be pronounced four different ways, all correct. On top of writing a brand-new system to store patient data, Mumba and his team modified some expired “internet appliances” (remember those?) to create a top-notch data-entry system, and even went so far as to weld up towers to carry a mesh network. “We have had to become jacks of all trade and build whole systems, including the infrastructure, from the ground up,” Soyapi says. “People are coming to Malawi to learn how we did it.”

Walé Oyéjidé is a fashion designer with Ikiré Jones whose clothes and accessories bear a message — to celebrate the culture and designs of the African diaspora and to rewrite cultural narratives. His culture-bending tapestries blend aesthetics from across the globe to craft a message about inclusivity. “The clothes we wear can be a great illustration of diplomatic soft power. Clothes can serve as bridges between our seemingly disparate cultures”

As he puts it: “For those of us from this beautiful continent, to be African is to be inspired by culture and to be filled with undying hope for the future. My work speaks for those who will no longer let their future be dictated by a troubled past. We stand ready to tell our own stories, without compromise, without apologies.” 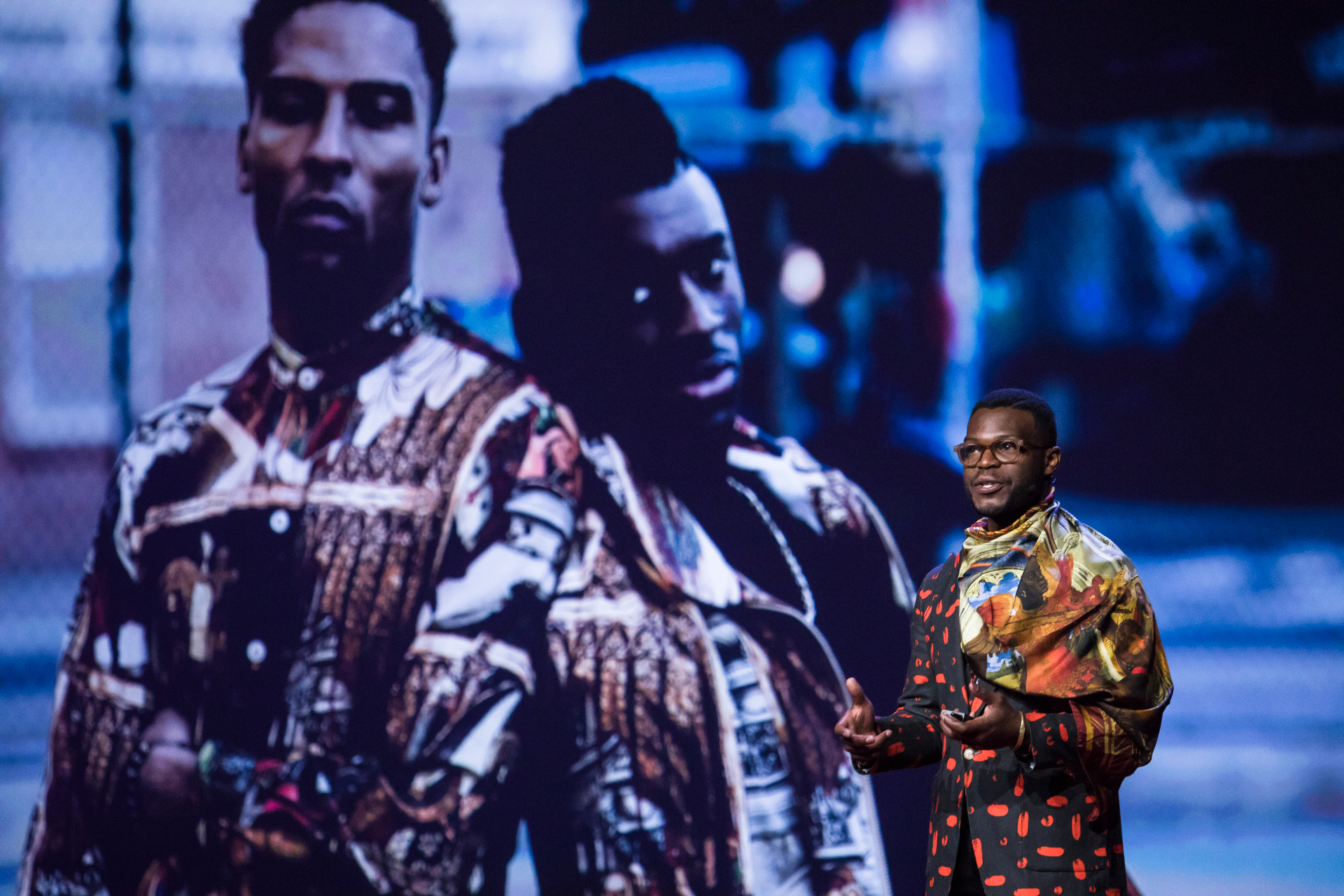 Walé Oyéjidé creates clothing that rewrites cultural narratives, marrying the culture and designs of the African diaspora to tailored jacket forms and rich scarves. (And yes, that’s one of his symbolic scarves in the trailer for Black Panther.) Photo: Bret Hartman / TED

Next, we watch a video about TED Fellow and explorer Steve Boyes, who’s using technology and good old-fashioned boots on the ground to map the vital Okavango Delta, a 18,000-square-mile wetland wilderness that straddles the borders of Botswana, Namibia, and Angola. Bonus: Read our new story about Steve’s encounter with two tribes who’d rarely met outsiders before.

To crown two sets of brilliant, tear-inducing, awe-inspiring and simply beautiful talks that brought us to our feet nearly every single time, we are blessed with a full collaboration of Meklit Hadero, Kasiva Mutua, cellist Joshua Roman and Blinky Bill.

That’s it for the TED Fellows sessions. But the conference is just warming up. Also, click here to learn more about the TED Fellows program: who they are, what it’s like, and if you are sufficiently inspired, how to become one (applications for the 2018 class of Fellows are due on September 10, 2017). 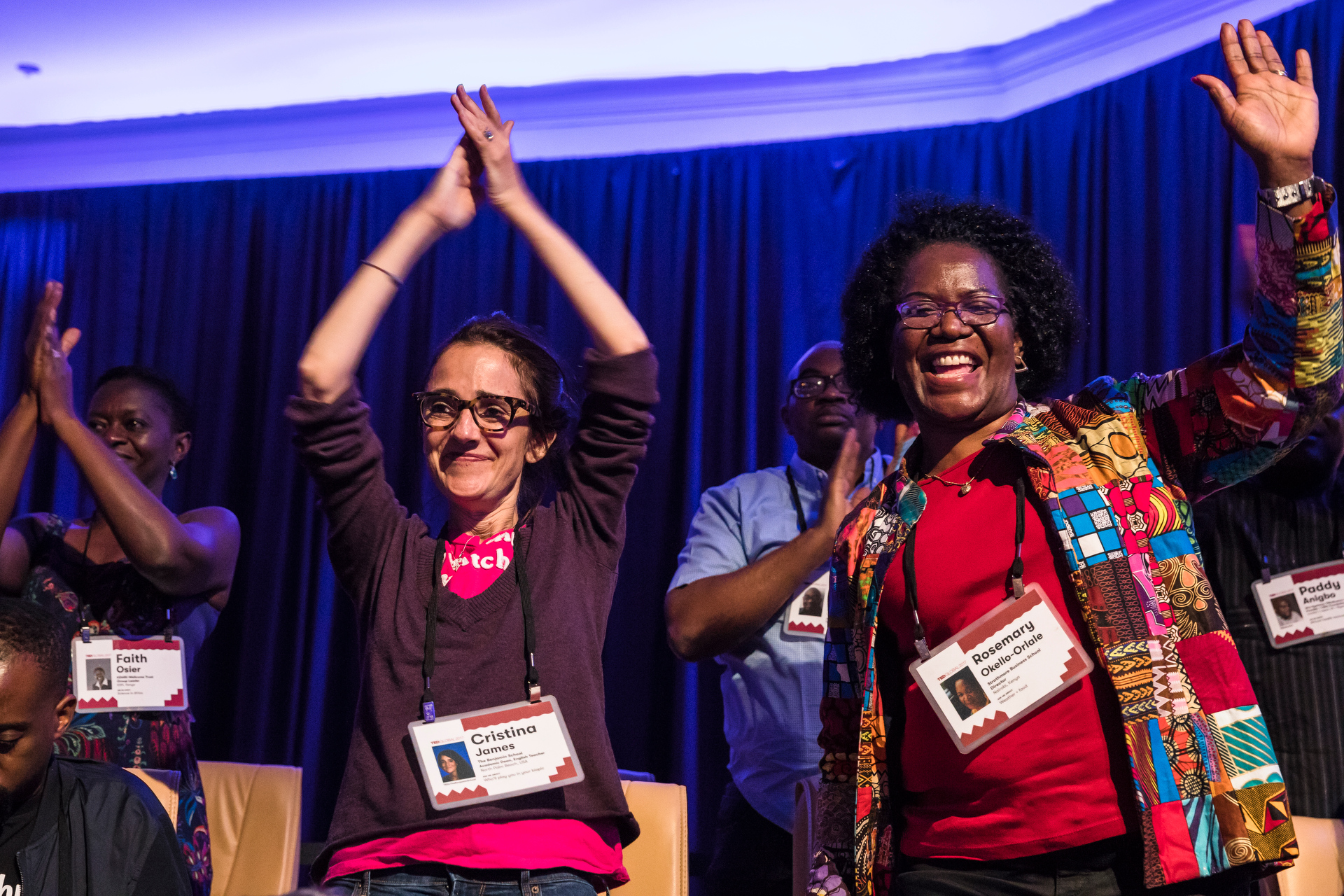 One of many standing ovations during the TED Fellows talks, this time from audience members Faith Osier, Cristina James and Rosemary Okello-Orlale, during TEDGlobal 2017 on Monday, August 28, 2017, in Arusha, Tanzania. Photo: Bret Hartman / TED