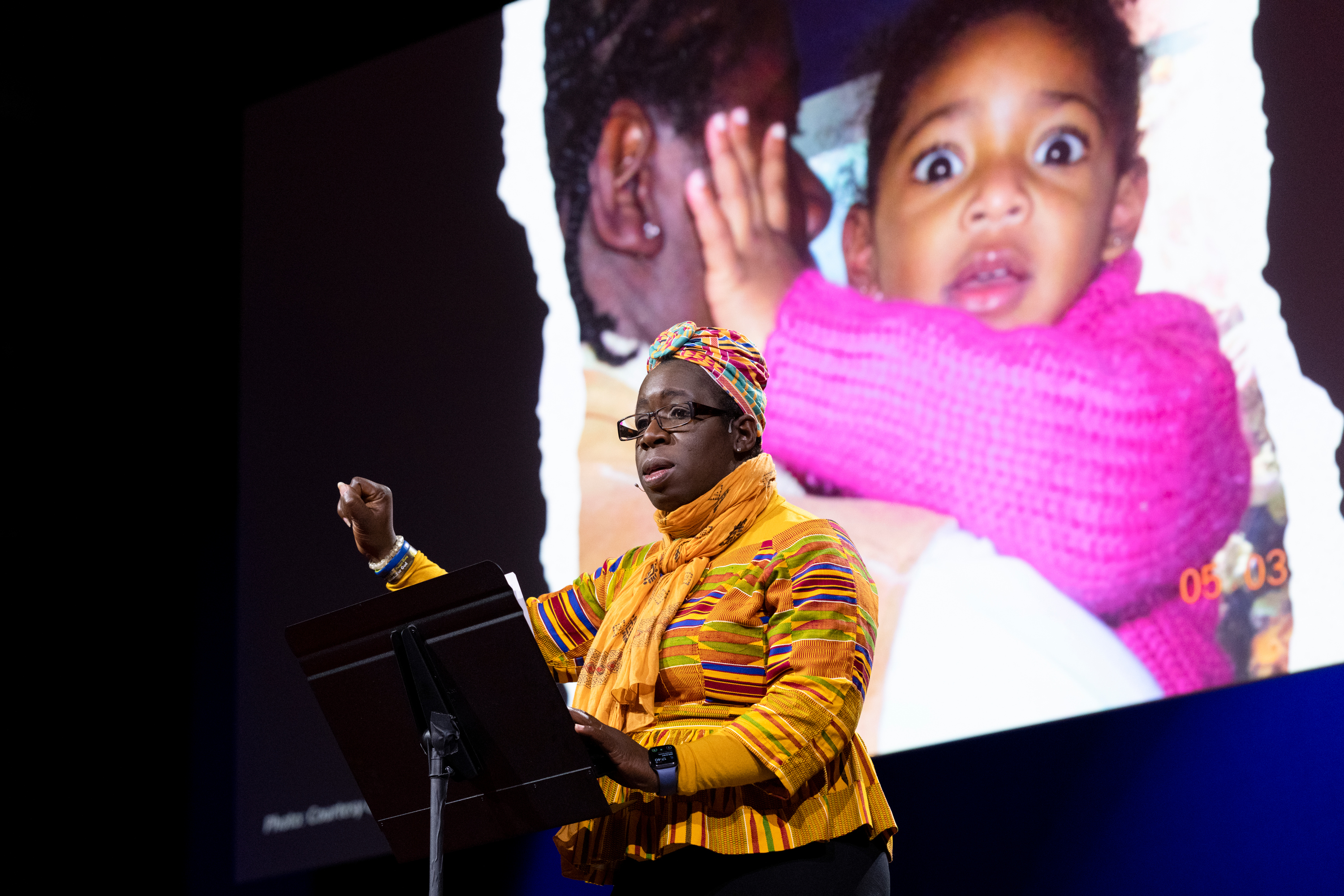 When looking to make big change, you can’t be shy about it — and Countdown is as much about boldly transforming the systems already in place as it is about creating new ones.

Working to reshape harder-to-abate industries like oil, gas, cement and aviation, the pioneering speakers of Session 3 share tangible solutions and groundbreaking ideas that will get us all to a healthier planet.

Performance: Inviting the audience to clap and sway to their vibrantly playful sound, legendary Scottish indie-pop band Belle and Sebastian give a bright rendition of Joni Mitchell’s “Big Yellow Taxi” and their own “Song for Sunshine.” 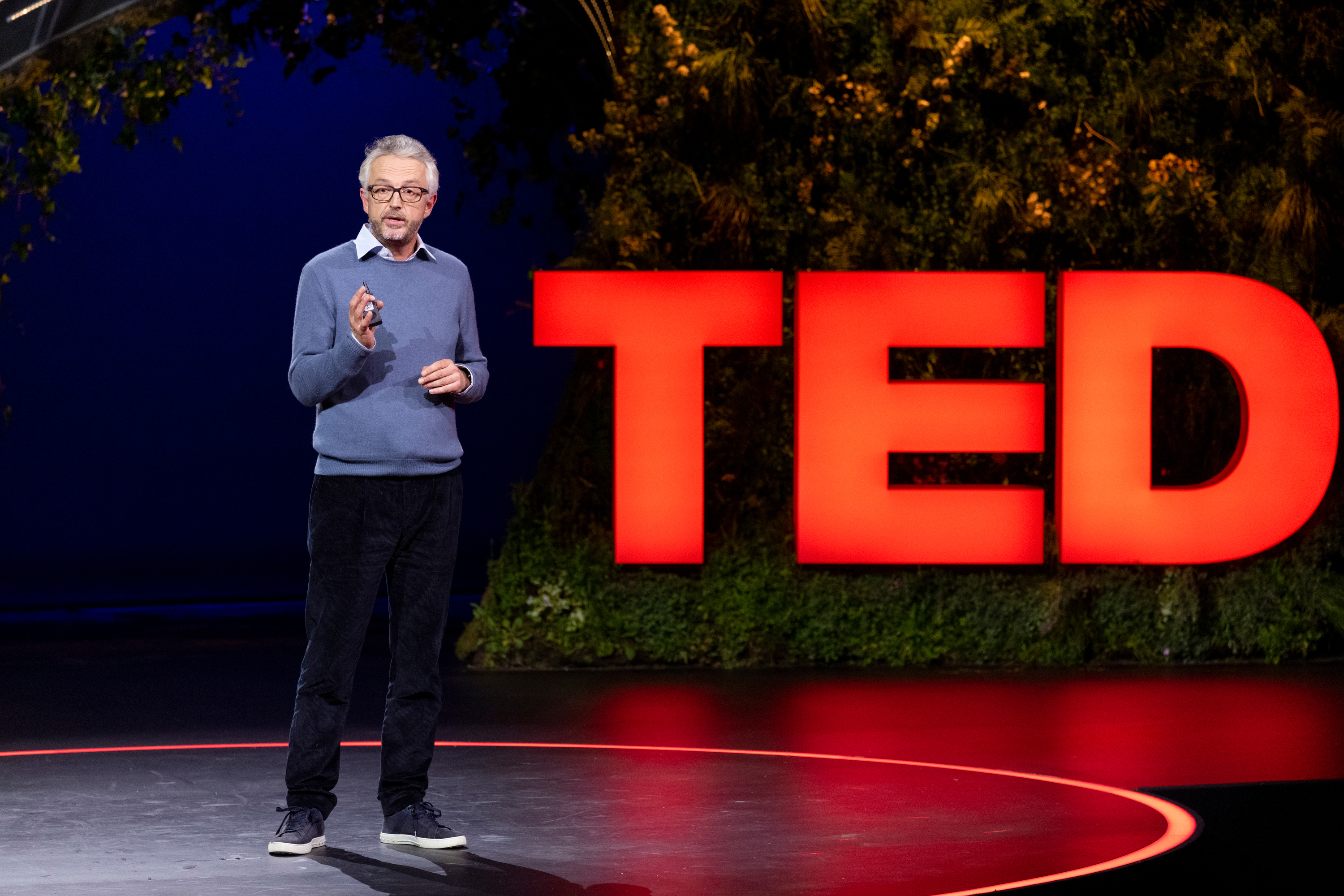 “Daring to say ‘net-zero’ changes minds — it shifts your mindset from defensive to proactive, from incremental change to having your eyes on the end goal,” says Bjørn Otto Sverdrup at Session 3 of the TED Countdown Summit on October 13, 2021 in Edinburgh, Scotland. (Photo: Bret Hartman / TED)

Big idea: Bringing the oil and gas industry to a net-zero emissions state is key to curbing climate change.

Why? Responsible for a significant chunk of global carbon emissions, the oil and gas industry needs to make a sharp turn into sustainable territory. Bjørn Otto Sverdrup leads the Oil and Gas Climate Initiative, an organization that brings together twelve of the world’s largest oil and gas companies in an effort to spearhead what he calls the 1/4/20 challenge, named after the 20 gigatons of emissions produced annually by the industry. Their goal is for the industry to achieve net-zero emissions — a daunting pivot that demands brazen policy changes, new technologies and a top-down rethink of how we consume energy. But before logistical difficulties can be fully solved, we need a fundamental transformation of how we think and what we believe is possible. “Daring to say ‘net-zero’ changes minds,” says Sverdrup. “It shifts your mindset from defensive to proactive, from incremental change to having your eyes on the end goal.” 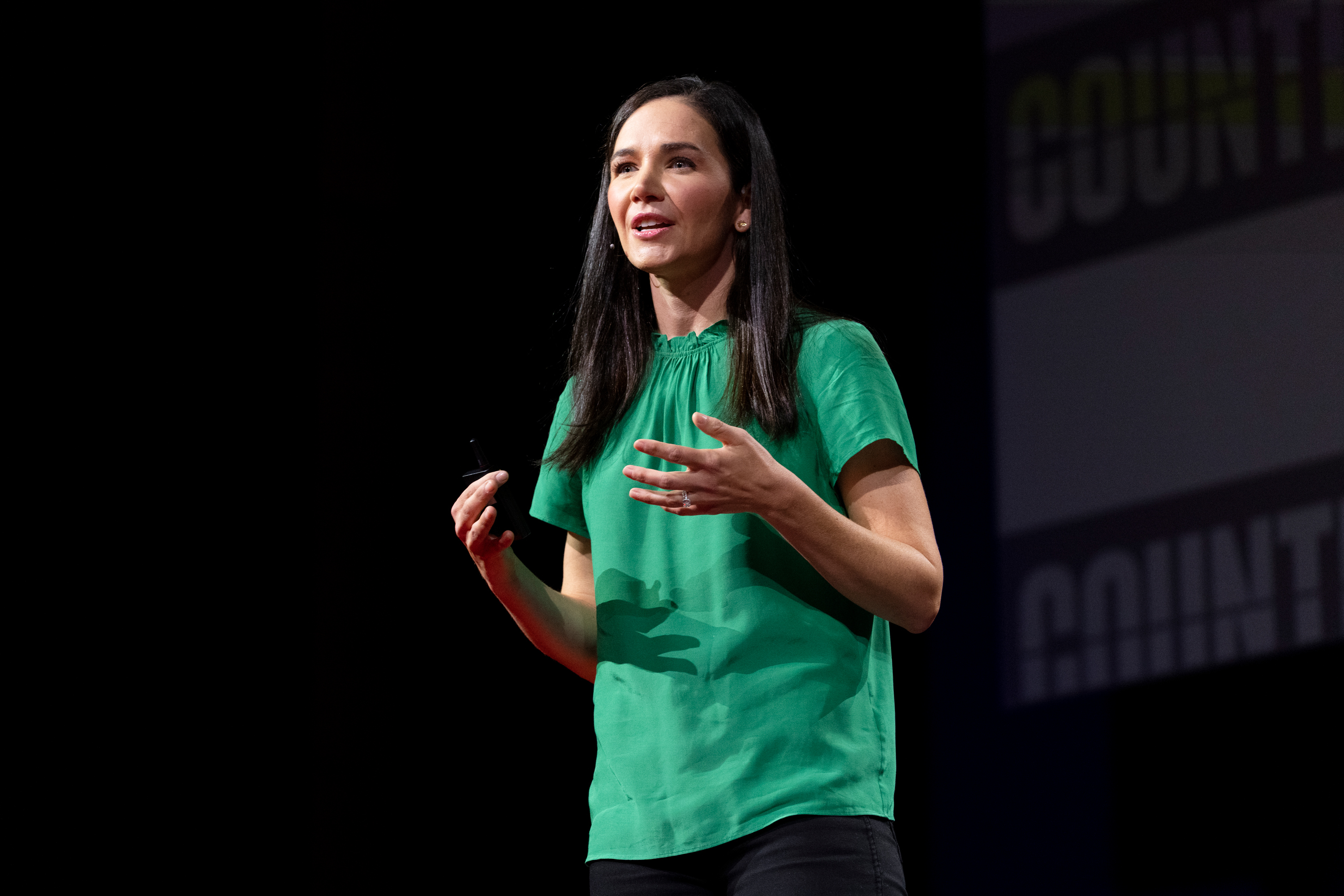 Big idea: There are three big things that need to be addressed if the flying industry is to get off the ground on climate action.

What are they? Air travel builds bridges and connects us, it takes people to new lives and experiences — but it also comes at a cost to the planet. Ryah Whalen points out that it’s not an easy task to decarbonize flying; planes manufactured today have a lifespan of about 30 years, meaning the planes we create and fly in today will still be in the skies come 2050. If nothing’s done in the industry, air travel stands to create almost a quarter of the world’s emissions yearly moving forward. To reroute from a polluted future, Whalen breaks the problem down into three sections of the industry that need to be addressed to stave off emission growth. First, aircraft design must be coupled with a thorough change of every layer of air traffic management, down to individual pilot behaviors. Second, we need to switch to biofuels and bring their costs down. And finally, sustainable innovations like hybrid-electric aircraft and green hydrogen need to create rapid progress at scale. While challenges lie ahead — notably the billions in investments needed for change — the world and lives are at stake. Individual choices to limit flying can only get us so far. If we want any hope of getting to zero emissions, it will take collective action from all parts of the air travel industry.

Big idea: Breathing clean air is every child’s human right, and governments have a duty to protect it.

Why? Linked to premature deaths across the globe, air pollution is an invisible calamity — and unsafe air is especially bad for children. Grassroots campaigner Rosamund Adoo-Kissi-Debrah shares the heartrending story of her daughter Ella, whose asthma was triggered to a fatal point by unsafe levels of air pollution, and tragically, was the first person in the world to have air pollution listed as a cause of death on her death certificate. “8.7 million people a year are dying from heart attacks, asthma, cancer and other illnesses,” explains Adoo-Kissi-Debrah, and the fossil fuels causing air pollution are a contributor to this tragic statistic. She urges the world to embrace a solution that already exists: to shift from toxic fuels to clean, electrified, public transport and, most importantly, to mobilize and demand clean air. 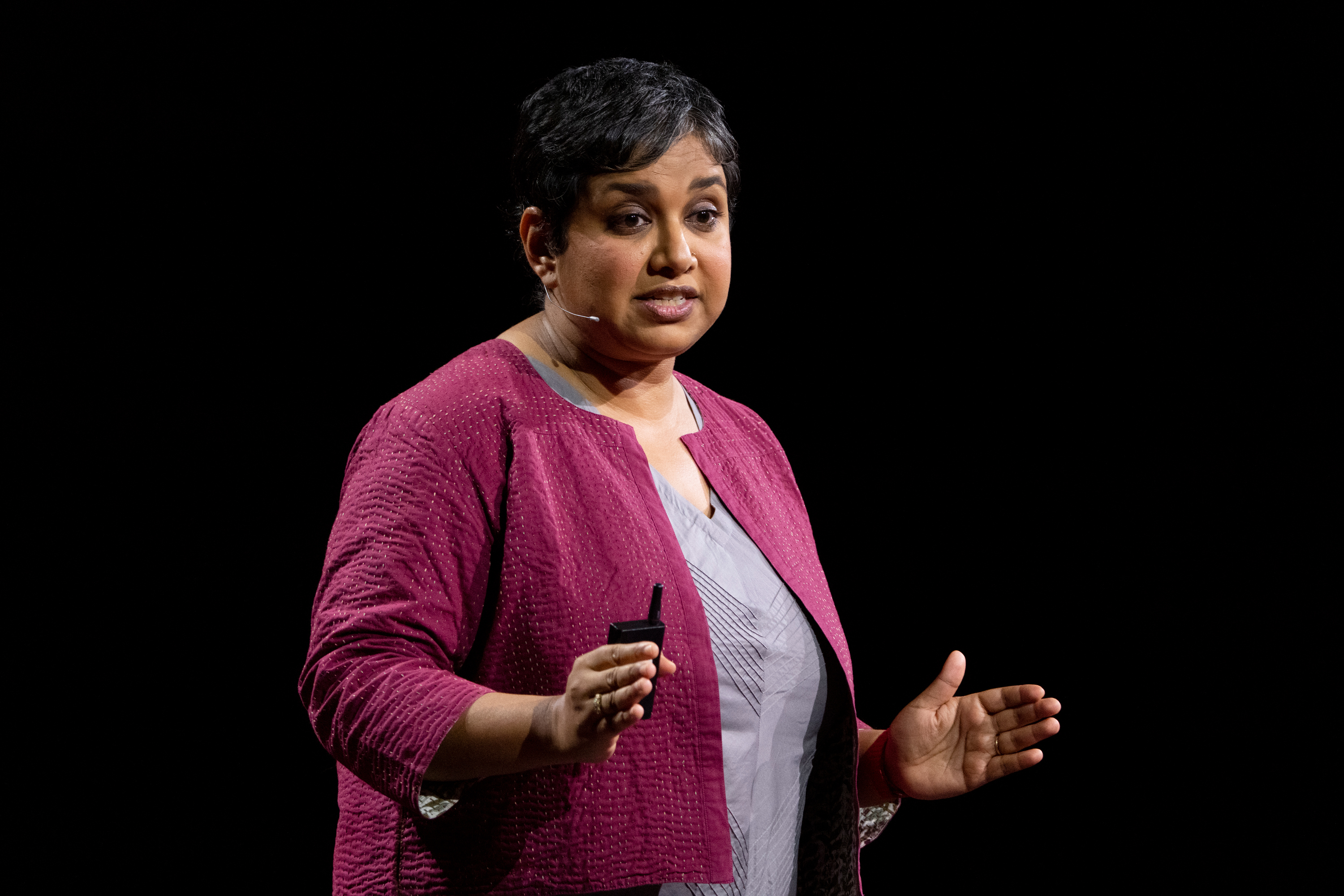 “It’s impossible to have healthy people on a sick planet,” says Shweta Narayan at Session 3 of the TED Countdown Summit on October 13, 2021 in Edinburgh, Scotland. (Photo: Bret Hartman / TED)

Big idea: As greenhouse gases and toxic pollutants encroach on both our atmosphere and our bodies, ancient wisdom offers humanity hope in this new phase of civilization, where individual well-being and environmental health intersect.

How? Environmental destruction is the biggest global health issue threatening humanity today — straining infrastructure and power grids, spurring pandemics and causing pollution. Shweta Narayan introduces a new perspective: by viewing climate change and degradation through the lens of the Hippocratic Oath — an ancient set of ethical standards sworn by physicians — every person has a role to play in ecological survival. Narayan encourages us to place “first do no harm” to the planet at the heart of our all of our choices. “It’s impossible to have healthy people on a sick planet,” says Shweta Narayan. 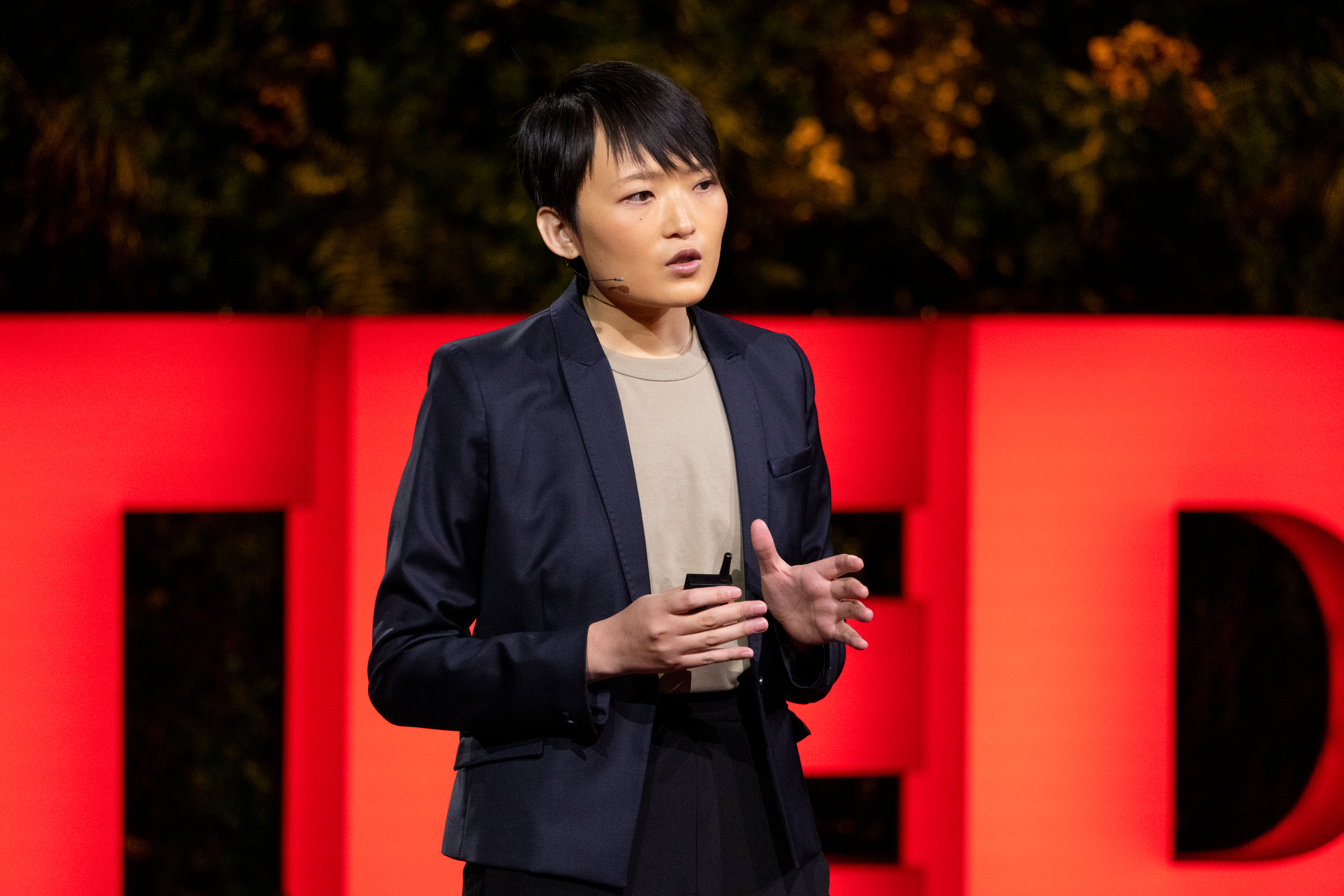 Big idea: As the world’s largest carbon emitter (and its second-largest economy), China plays a pivotal role in mitigating climate change. The steps it takes towards becoming net-zero by 2060 are crucial on a global scale.

How? In 2020, Chinese president Xi Jinping pledged to the UN that China would both peak its emissions by 2030 and achieve net-zero emissions by 2060 — a change that will require action at an unheard-of scale and speed, explains environmental journalist Hongqiao Liu. While it’s still reliant on fossil fuels to drive its economy, China is also a world leader in renewable energy and sustainable infrastructure. This is already transforming energy consumption — but is it enough? Citing economist Zou Ji, Liu is hopeful for change. In addition to burgeoning green energy production, which may allow China to reach peak emissions years ahead of its goal, the country’s leaders are also now downplaying GDP as a metric of economic health, which could be a crucial step towards sustainable growth — and one which could inspire a paradigm shift around the world.

Big idea: With carbon-capture and neutralizing technology, notoriously hard-to-abate sectors like cement could transform it into carbon-negative industries.

How? Cement is vital to modernizing infrastructure of all kinds in the developing world — but manufacturing it comes at an enormous environmental cost. Producing and transporting a single ton of cement still emits half a ton of CO2, even after decades of efforts to reduce its carbon footprint. At Dalmia Cement, one of the largest producers of cement in India, Mahendra Singhi is determined to transform the industry into a sustainable one. To make cement carbon-negative, the company is targeting the two largest sources of CO2 emissions in the manufacturing pipeline: the fossil fuels used to process and transport the material and clinkerisation, the chemical process that makes cement a usable product. And while adopting renewable energy sources like electric cars and green fuel is relatively straightforward, the more difficult challenge is turning the CO2 produced by the clinkerisation process — which represents up to half of the CO2 emissions associated with cement — into a productive material. Large-scale carbon capture plants might be the ticket to sparing this CO2 from the atmosphere and transforming it into something usable. Though still a nascent technology, Dalmia’s recent feasibility study on the subject “proved that it is technologically and economically viable,” says Singhi. “From 2040, my cement manufacturing process will not emit a gram of CO2.”

Big idea: If we want clean cooling systems that don’t contribute to global warming, we must tackle issues of sustainability and fairness at the same time.

How? Global surface temperatures are at an all-time high — but the way we cool down is heating up the planet even more. Most traditional cooling methods are energy inefficient and depend on polluting refrigerants like hydrofluorocarbons (HFCs). Activist Rachel Kyte, who works to identify paths to cleaner energy systems, outlines four steps to climbing out of this intensely pollutive and disparate system. First, we need to move away from building designs that center on traditional air conditioning — think ultra-white, heat reflective paint and garden-rich rooftops. According to Kyte, the cooling technologies we use need to be at least 50 percent more efficient than today’s most sustainable unit. Next, governments must commit to HFC-free technologies on a global scale. Finally, we need cold chains for perishable medicines, food and other products — for every community on the planet. While some bask in air-conditioned suburban homes, billions of people around the world don’t even have access to the basics. “What is scary is that we are not having enough conversations in enough places and driving enough investments into affordable, non-polluting efficient solutions for cooling for everyone,” says Kyte. 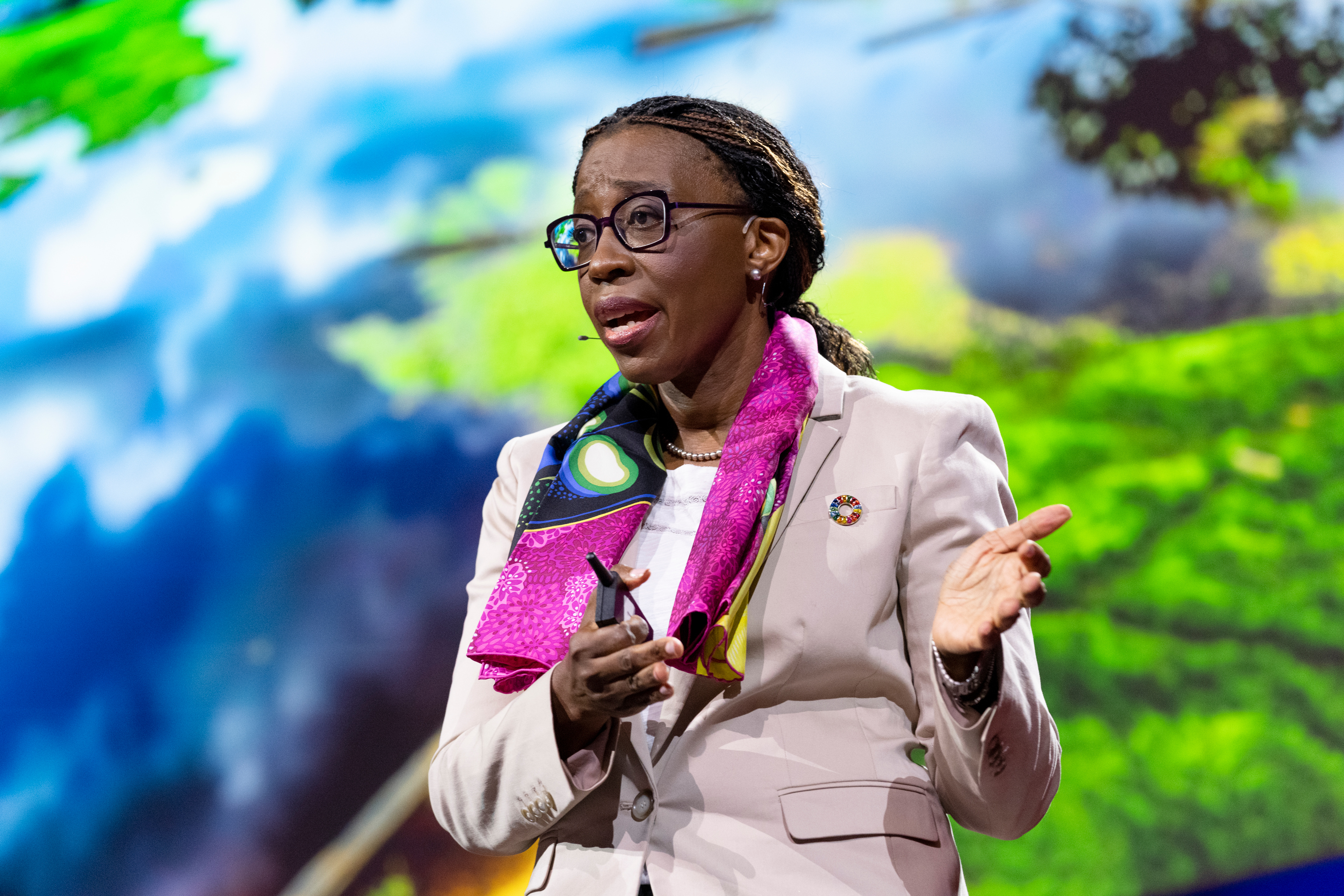 “We must collectively ask the markets to recognize and adequately reward Africa’s contribution to slowing climate change by putting a price on carbon,” says Vera Songwe at Session 3 of the TED Countdown Summit on October 13, 2021 in Edinburgh, Scotland. (Photo: Gilberto Tadday / TED)

Vera Songwe, Under-Secretary-General of the United Nations and Executive Secretary of the Economic Commission for Africa

Big idea: The peatlands of the Congo Basin are an invaluable resource in the fight against climate change, and protecting them via a responsible development plan should be a global priority.

Why? Recently identified as one of the world’s most efficient carbon sinks, the peatlands of the Central African Congo Basin absorb a sizeable portion of global emissions. But, like many other biodiverse territories, it’s on the verge of being churned into grist for the capitalist mill. Vera Songwe believes that money and resources should flow in the other direction. At a price of $50 per unit of the 30 billion tons of carbon the peatlands soak up, a $1.5 trillion Peatlands Development Fund could be established to transform the economic realities of communities in the region. A budget that size would ensure robust local infrastructure, create jobs  and, most importantly, nudge regional economic development in the direction of preservation instead of exploitation. “This is not just about decarbonization, it is about development with dignity,” says Songwe. “We must collectively ask the markets to recognize and adequately reward Africa’s contribution to slowing climate change by putting a price on carbon.”

Big idea: The ocean is an unsung hero in the story of climate change, providing readymade solutions to the climate crisis — if we are smart enough to recognize them.

Why? A vital part of our life support system here on earth, the ocean produces half of the earth’s oxygen (that’s one in every two breaths you take). It helps regulate the planet’s temperature and absorbs anywhere from a quarter to a third of the CO2 we put into the atmosphere — making it the world’s largest carbon sink. The ocean does a lot for us already — our first priority should be not messing that up, says Susan Ruffo, Senior Advisor for Ocean and Climate at United Nations Foundation. Beyond that, there’s a thrilling range of ocean-based climate solutions we could tap into — from the carbon-absorbing power of mangroves and salt marshes to dense oysters reefs that could lower the risk of major flood damage — if we start to appreciate the ocean’s role in helping us address the climate crisis.