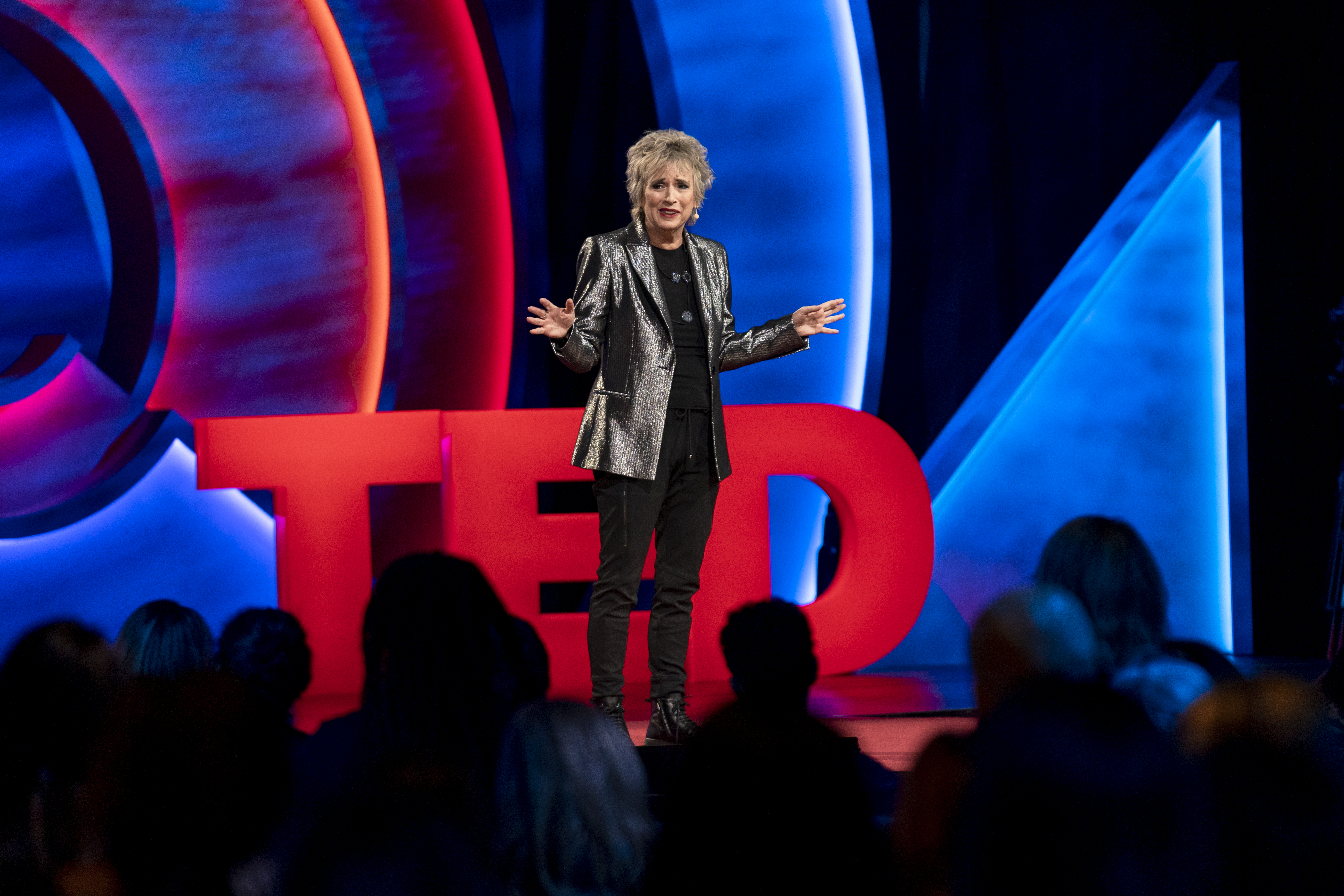 Author and playwright Eve Ensler discusses the power of apologies — and the four crucial components of a sincere one. She speaks at TEDWomen 2019: Bold + Brilliant, on December 4, 2019 in Palm Springs, California. (Photo: Marla Aufmuth / TED)

The stage is set for TEDWomen 2019: Bold + Brilliant! In the opening session, we heard from an extraordinary lineup of truth tellers. Six speakers and two performers shined a light on issues ranging from immigration to leadership and inclusion — and how we can shatter the glass ceiling once and for all — sharing new ways to look at old problems.

When and where: Wednesday, December 4, 2019, 5pm PT, at La Quinta Resort & Club in La Quinta, California

Opening: Reid D. Milanovich, Vice Chair of the Agua Caliente Band of Cahuilla Indians, welcomes TEDWomen attendees to the Cahuilla Valley, which has been his tribe’s ancestral homeland for thousands of years. 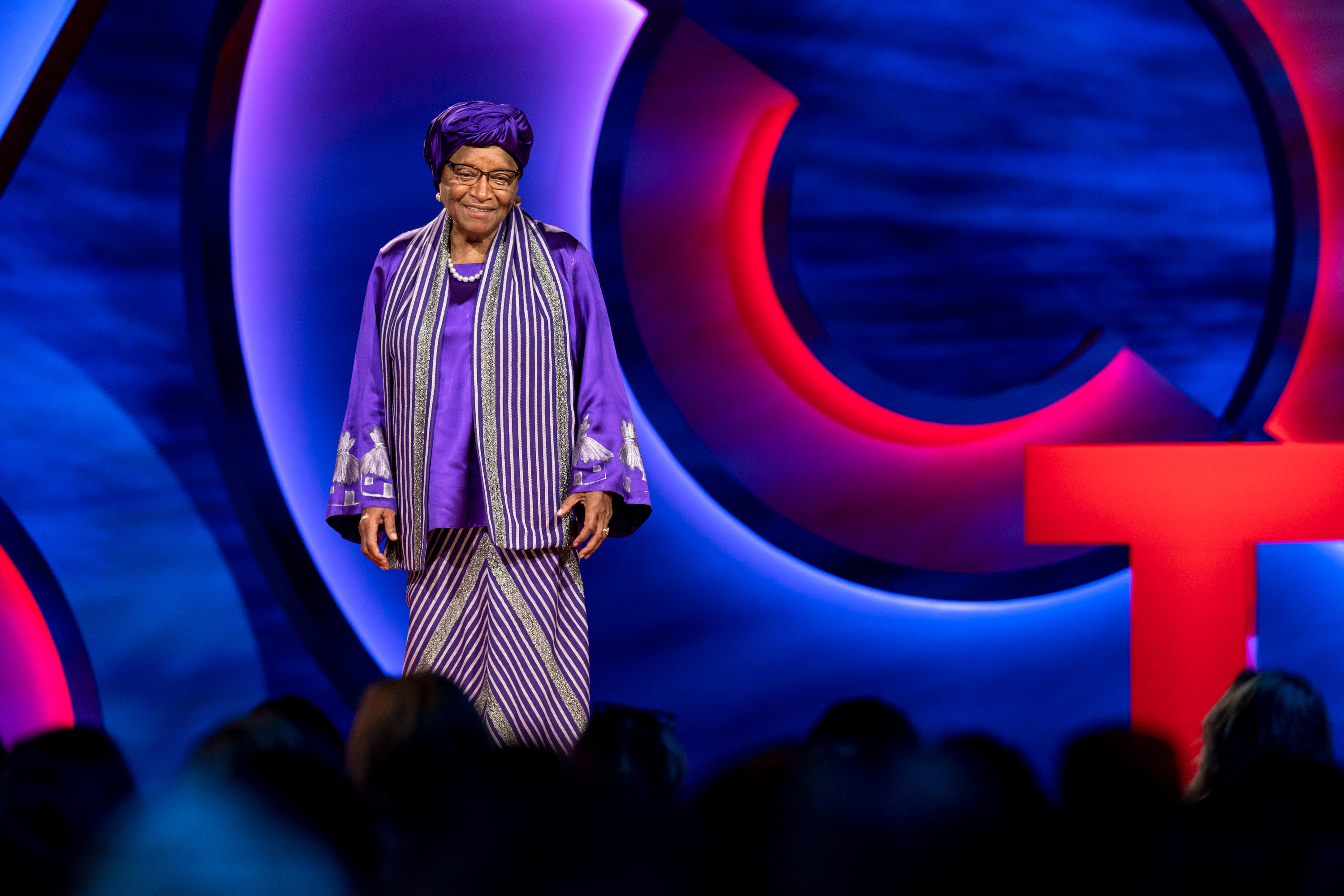 “I was the first woman president of an African nation, and I do believe more countries ought to try that,” says H.E. Ellen Johnson Sirleaf. She speaks at TEDWomen 2019: Bold + Brilliant, on December 4, 2019 in Palm Springs, California. (Photo: Marla Aufmuth / TED)

Big idea: A nation needs women leaders to prosper. We must work together to remove the barriers that have kept them from achieving full equality and political representation.

How? When H.E. Ellen Johnson Sirleaf began her 12-year presidency of Liberia in 2006, she inherited the challenges of a country harmed by years of conflict: economic collapse, infrastructure destruction and institutional dysfunction. Most challenging of all was the damage women and children endured during the civil war, she says. Though Sirleaf helped steward financial growth and the reconstruction of the nation’s infrastructure, there’s still work to be done. On the TEDWomen stage, she announced the recent launch of the Ellen Johnson Sirleaf Presidential Center for Women and Development, which aims to elevate women into strategic government positions and break through the structural barriers that allow inequality thrive. Only by working towards full gender equity can we ensure peace and prosperity for all, she says.

Quote of the talk: “I was the first woman president of an African nation, and I do believe more countries ought to try that.”

Big idea: We must see that immigrants are a part of the same human family as the rest of us. If not, we stand to lose our own humanity.

Why? In her work at detention facilities at the US-Mexico border, Sister Norma Pimentel has learned that the people there simply want what all of us desire: safer, better lives for themselves and their families. While the humanitarian response has been impressive and supported by many dedicated volunteers, the policies and procedures in place cause great suffering — particularly for separated children and parents. We need to put aside our prejudices and fears and treat migrants in a respectful and compassionate manner.

Quote of the talk: “It’s important to be able to see [migrants] as people, to be able to have a personal encounter when we can feel what they feel, when we can understand what they’re hurting. … It is then that we are present to them and we can make their humanity a part of our own humanity.”

Big idea: In a time of global strife and uncertainty, we can secure a brighter future by “thinking like a mother” — with optimism and empathy.

Why? When you think like a mother, you imagine a better world and act to make it possible, says Yifat Susskind. Because mothers are versed in a vital language: the language of love. When love drives our actions, we feel empowered to repair the world and protect those in need. Empathy and optimism are powerful tools, she says, both in our own lives and across public policy. By thinking like mothers and acting with care, we can prioritize the most vulnerable and forge a luminous, resilient path forward.

Quote of the talk: “Love isn’t just an emotion, it’s a capacity. A verb. An endlessly renewable resource.”

A comedic interlude: Comedian Gina Brillon commanded the stage with an uproarious stand-up performance, poking fun at everyday annoyances and interactions. “Have you ever had somebody say something wrong with such confidence that it made you question how you’ve been saying it your whole life?” she joked. 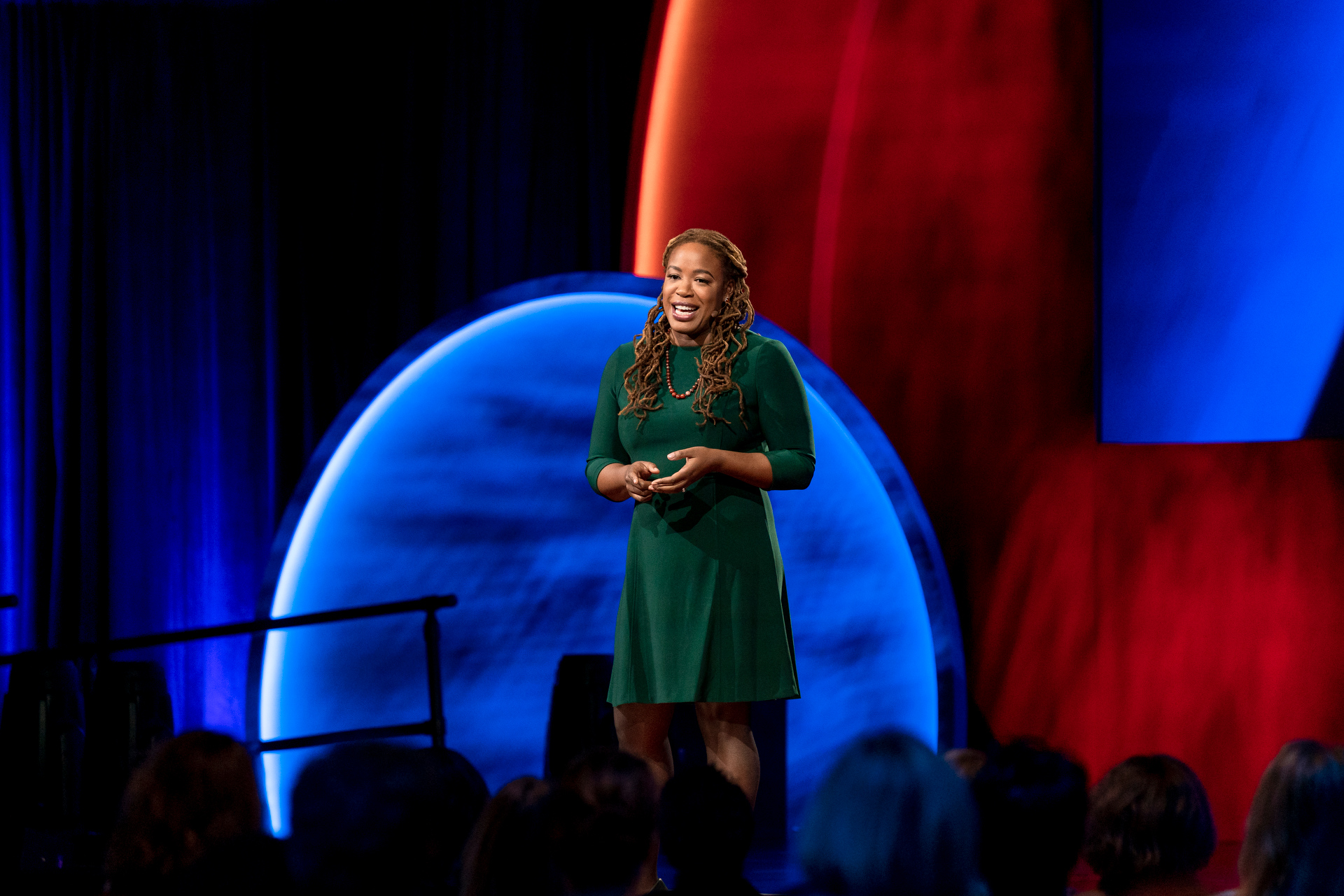 Writer and advocate Heather C. McGhee explores how racism leads to bad policymaking — and hurts the economic potential of everybody. She speaks at TEDWomen 2019: Bold + Brilliant, on December 4, 2019 in Palm Springs, California. (Photo: Marla Aufmuth / TED)

Big idea: Racism is bad for everyone — even the people set up to benefit from privilege.

Why? Heather C. McGhee is a self-proclaimed “public policy wonk.” She investigates problems in the American economy: rising household debt, declining wages and shortfalls in infrastructure investment. Through her research and travels across the US, she’s come to a chilling conclusion: racism is making our economy worse — and not just in ways that disadvantage people of color. “It turns out it’s not a zero sum,” she says. “Racism is bad for white people, too.” Take, for example, the subprime mortgages that precipitated the 2008 recession. African Americans and Latinos were three times as likely as white people to be sold these toxic loans, even if their credit was as good. Stereotypes blinded many policymakers to this reality, keeping them from stopping the crisis even when there was still time. McGhee says the way forward is to hold accountable the people selling racist ideas for profit — and start recognizing that we’re all on the same team.

Quote of the talk: “It’s time to reject that old paradigm and realize that our fates are linked. An injury to one is an injury to all.” 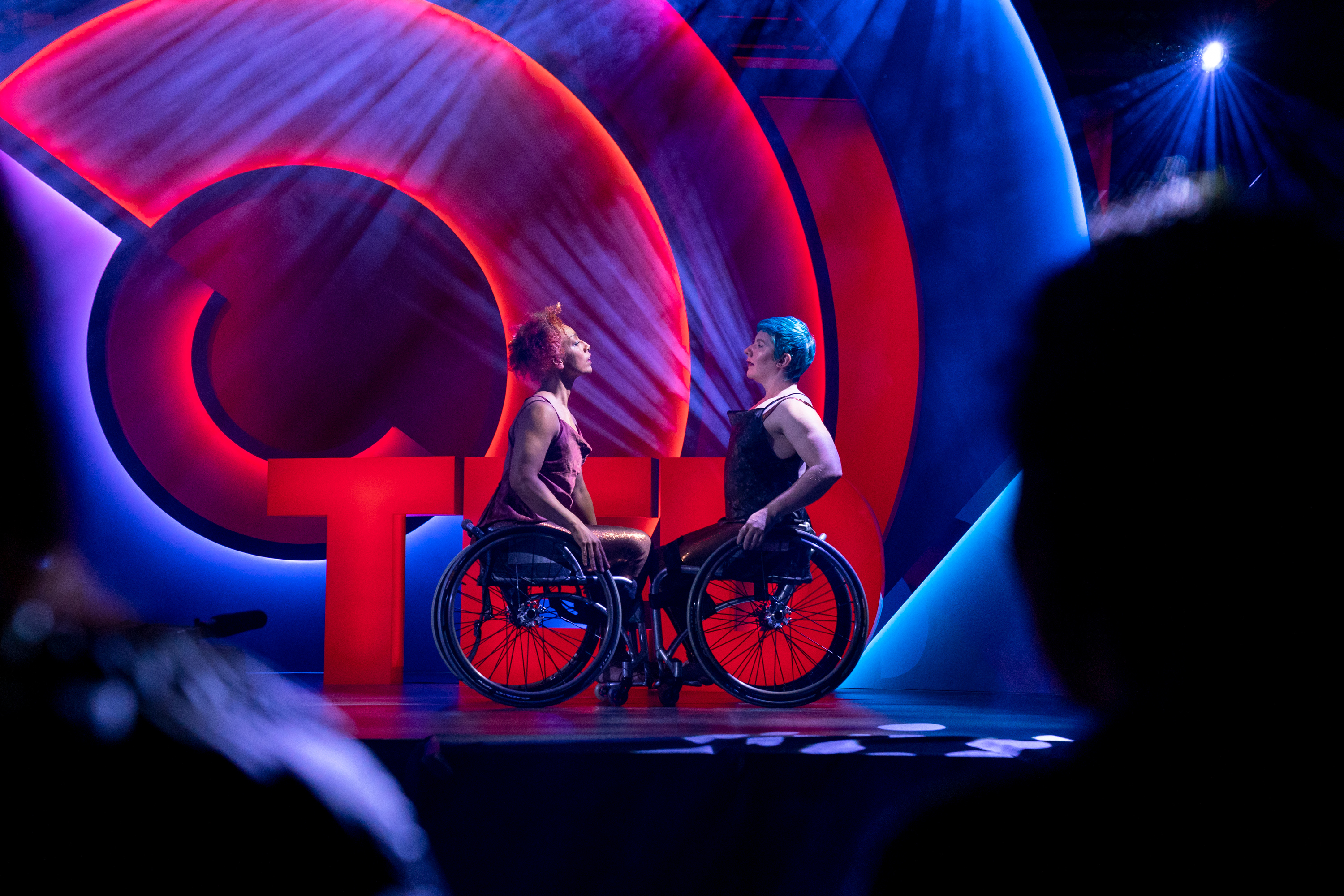 A special performance: Artistic director Alice Sheppard speaks about the work of her dance company Kinetic Light, which creates movement that challenges conventional understandings of disabled and dancing bodies. As she puts it: disability is the spark for artistry, aesthetic and innovation. She’s joined onstage by her choreographic collaborator Laurel Lawson, in a stunning performance.

Big idea: After calling abusers out, we now have to call them in. We need to invite them to take responsibility for their actions, to apologize and change.

How? Eve Ensler waited most of her life for an apology. As a child, she was sexually and physically abused by her father. Nearly 31 years after his death, she sat down to write the apology that he never gave her — expressing, from his perspective, the words she needed to hear. Now, in the wake of the Me Too and Times Up movements, she shares how the incredible power of apologies could offer us a way forward. It boils down to abusers taking four crucial steps: admit your wrongdoing in detail; ask yourself why you did it; sit with the suffering and hurt you’ve caused; and take responsibility and make amends. An apology, she says, is the only way for both the victim and the abuser to be free. Let’s create a better process that invites abusers to repent and become someone different along the way.