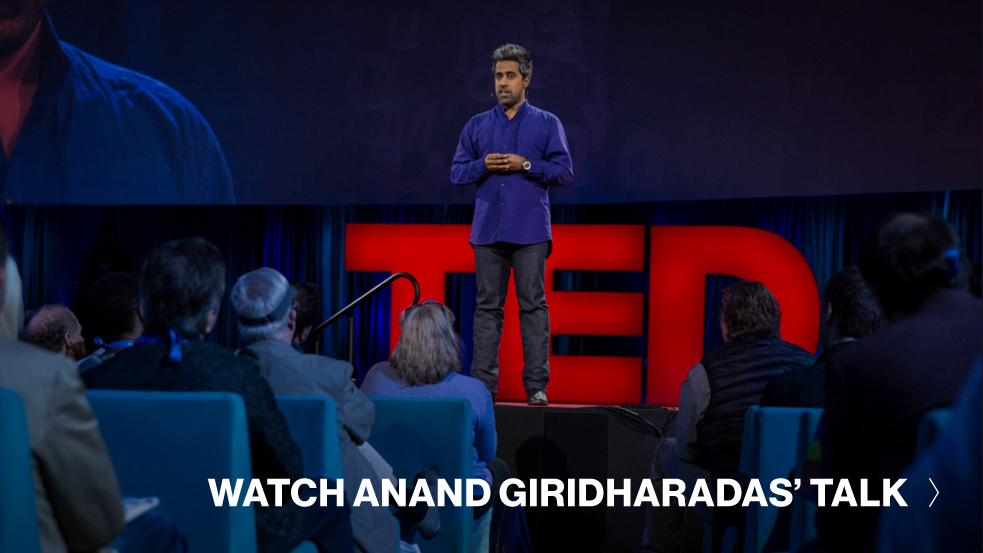 Anand Giridharadas brings us to a Dallas mini-mart on the night of September 21, 2001.  That night, a man named Mark Stroman walks into the store with a gun. He didn’t want money; he wanted blood in retaliation for September 11. He shot the Bangladeshi immigrant working at the counter, Raisuddin Bhuiyan, in the face.

Raisuddin lived; Mark ended up on death row for the crimes he committed that night. And in the collision of these two men, Giridharadas sees a parable of two Americas — perhaps not the two as they are usually defined.

To understand this story, we need to know both of these men’s histories. Raisuddin had been in the Air Force in his home country before leaving to find greater opportunity in the United States, and was working in the mini-mart to save up for I.T. classes. When he was shot, his fiancé left him, his landlord kicked him out of his apartment, and he built up $60,000 in medical debt, because he didn’t have insurance. But Raisuddin carried on. He started working at an Olive Garden (“because where better to get over his fear of white people?” jokes Giridharadas); got part-time I.T. work; and ended up with a high-paying tech job.

Mark, on the other hand, grew up in the United States, his life characterized by “bad parents, bad schools, bad prisons.” He went to juvenile detention as a teenager and prison soon after. He became a white supremacist. The day he shot Raisuddin, he shot two other mini-mart clerks. Only Raisuddin survived.

“Soon he found himself on Death Row,” says Giridharadas. It actually created change. “The people entering his life were virtuous and caring: pastors, journalists, pen pals. It sent him on a journey of introspection and betterment. He finally faced the hatred that had defined his life.”

In 2009, Raisuddin went on a journey of his own, to Mecca. “He recalled promising God, in 2001, to serve humanity if he lived. Now it was time to pay his debts,” says Giridharadas. “He decided, upon reflection, that his method of payment would be an intervention in the cycle of vengeance between the Muslim and Western worlds.”

So, Raisuddin forgave Mark publicly in the name of Islam. And he sued the state of Texas to prevent Mark’s execution.

“The closer Raisuddin got to the America he’d dreamed of from afar, the more he realized there was another America that was stingier with second chances,” says Giridharadas. “A newly minted American citizen, Raisuddin had come to believe that Stroman was the product of a hurting America that couldn’t be lethally injected away.”

In the end, Raisuddin wasn’t able to save Mark. But the fact that he even wanted to offers an important lesson for us all. “If human history were a parade, America’s float would be a neon shrine to second chances,” says Giridharadas. “But America, generous with second chances for the children of other lands, today grows more miserly with first chances for the children of its own.”

He ends with a barn-burner call to the audience: “Don’t console yourself that you are the 99 percent. If you live near a Whole Foods; if no relative of yours serves in the military; if you’re paid by the year, not the hour; if no one you know uses meth … if any or all of these things describe you, then accept the possibility that you may not know what’s going on. And that you may be part of the problem.”

“The moral challenge of my generation, I believe, is to reacquaint these two Americas,” he says. “It is a moral challenge that begs each of us in the flourishing America to take on the wilting America as our own. As Raisuddin tried to do.”

“A republic of chances — rewoven, renewed,” he says, audience members already on their feet for a standing ovation. “It begins with us.”