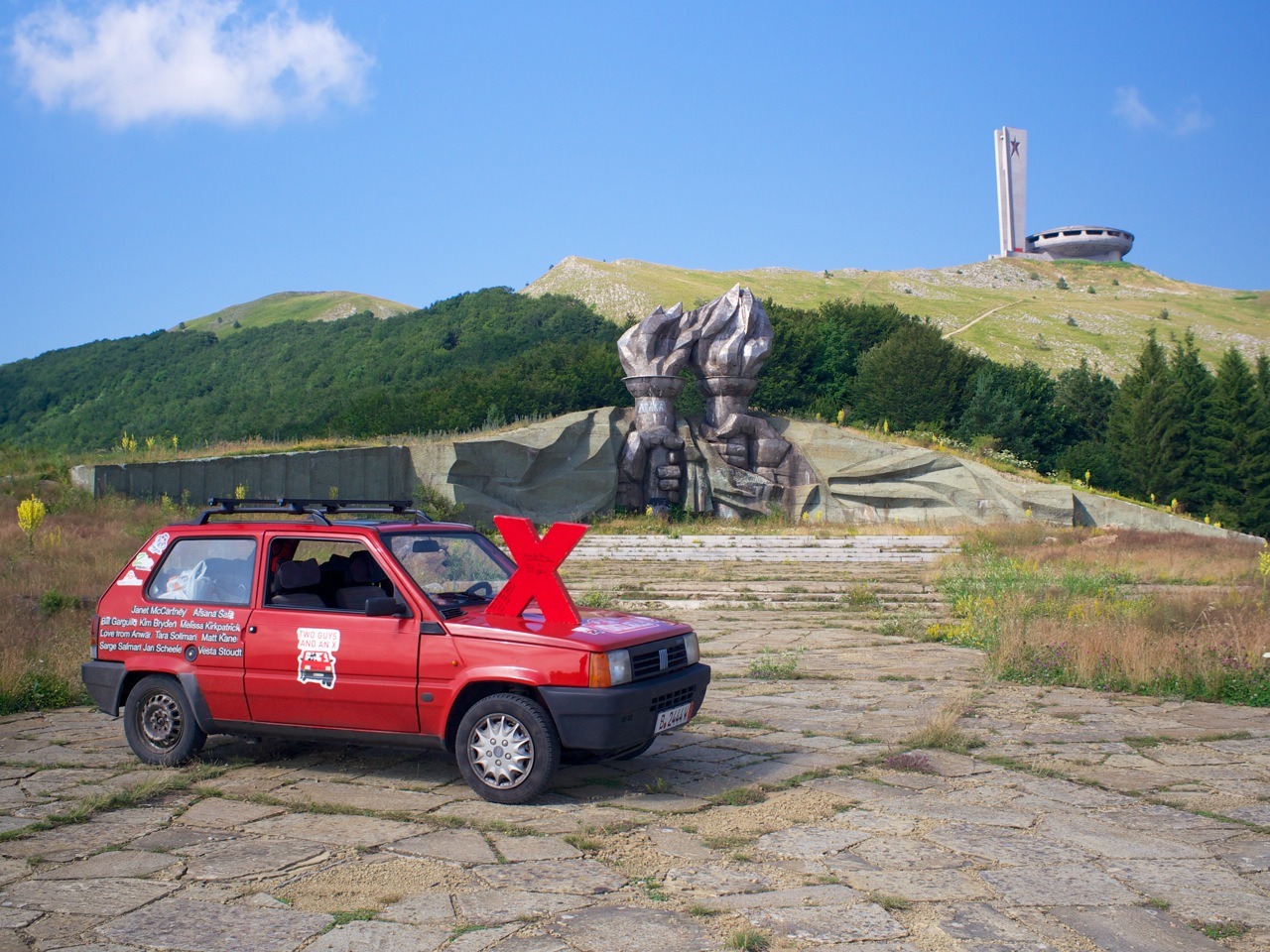 Two guys, a giant red X and an extremely unreliable compact car on a journey from London to Ulaanbaatar. Sounds like an ideal vacation, right?

For Nate Mook — organizer of TEDxMidAtlantic, TEDxMogadishu and TEDxEverest — there’s no other way he’d rather spend his time off. This past July, he and Steve Garguilo, organizer of TEDxJNJ, set out on the “Mongol Rally,” an unmapped journey taken each year by adventurists around the world across 10,000 miles of mountains, deserts and grasslands. Only Mook and Garguilo’s journey, documented on the blog TwoGuysandanX.com, had a greater purpose: they visited 32 TEDx organizers in 15 cities on their journey, under the loving guidance of Google Maps.

“What better way to see the scale of the TEDx community than to drive around the world and meet amazing people in their communities?” asks Mook. From experiencing major car trouble in Kazakhstan (apparently it’s possible to pop two tires with one pothole), to drinking delicious wine in Moldova, Mook and Garguilo received warm welcomes from TEDx’ers everywhere they went.

“That’s the amazing thing about TEDx — whether we were in Azerbaijan or Mongolia, we were meeting people that were really more similar to us than different,” he says. 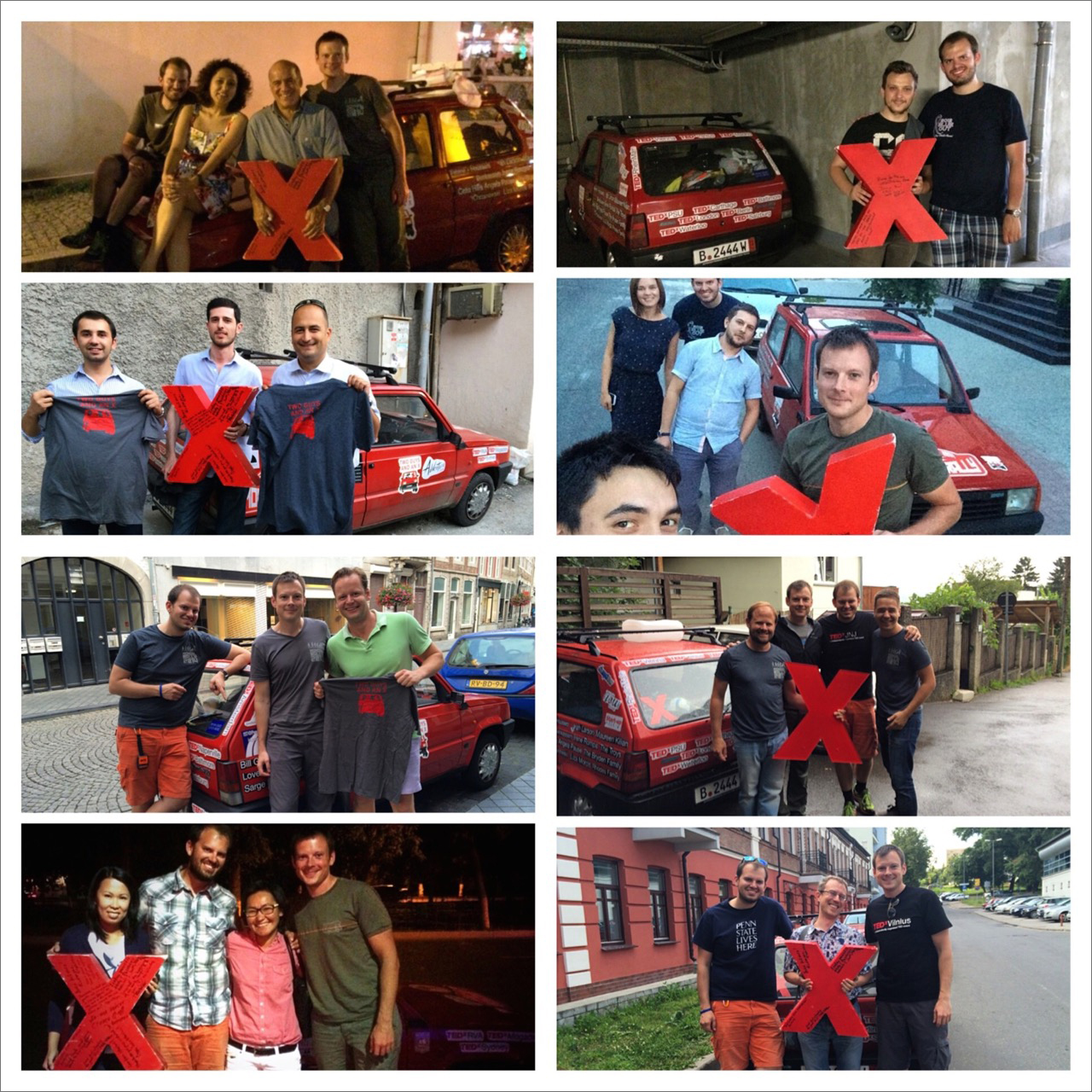 The pair poses with some of the 32 TEDx organizers they met on their trip. Photo: Nate Mook and Steve Garguilo

For instance, Mook and Garguilo spent one afternoon with a TEDxMinsk organizer, talking about the challenges his team faces in putting on a TEDx event in such a remote location. Later, they went out for beers, to a bar where a heavy metal band happened to be playing — loudly. After screaming the lyrics to many Russian songs, the heavens parted and the band began playing a familiar song — the theme to “Ghostbusters.”

And then there’s the X. Garguilo had made a giant red X (using the fine art of TEDx letter-making) to bring on their cross-continent journey. It was the perfect travel companion; a light packer, super laid-back and always on time. But it was promptly lost by the airline on the very first leg of their journey to London. Not to worry. A TEDx team in Lithuania, after showing Mook and Garguilo around their city, loaned them another giant red X to take on the trip. “This ‘X’ will find itself back on the TEDxVilnius stage for their next event,” writes Mook, “but by then will be covered in signatures from TEDx organizers along our route.”

Traveling to places with varying landscapes, infrastructures and resources, Mook says he realized just how difficult it is for some TEDx teams to organize events. “It’s so cool to see people overcoming these challenges to put on great events,” he says.

For him, watching the team in Mongolia in action was especially interesting because “that’s not a place you’d think TEDx would happen. But they have a very vibrant community there.” 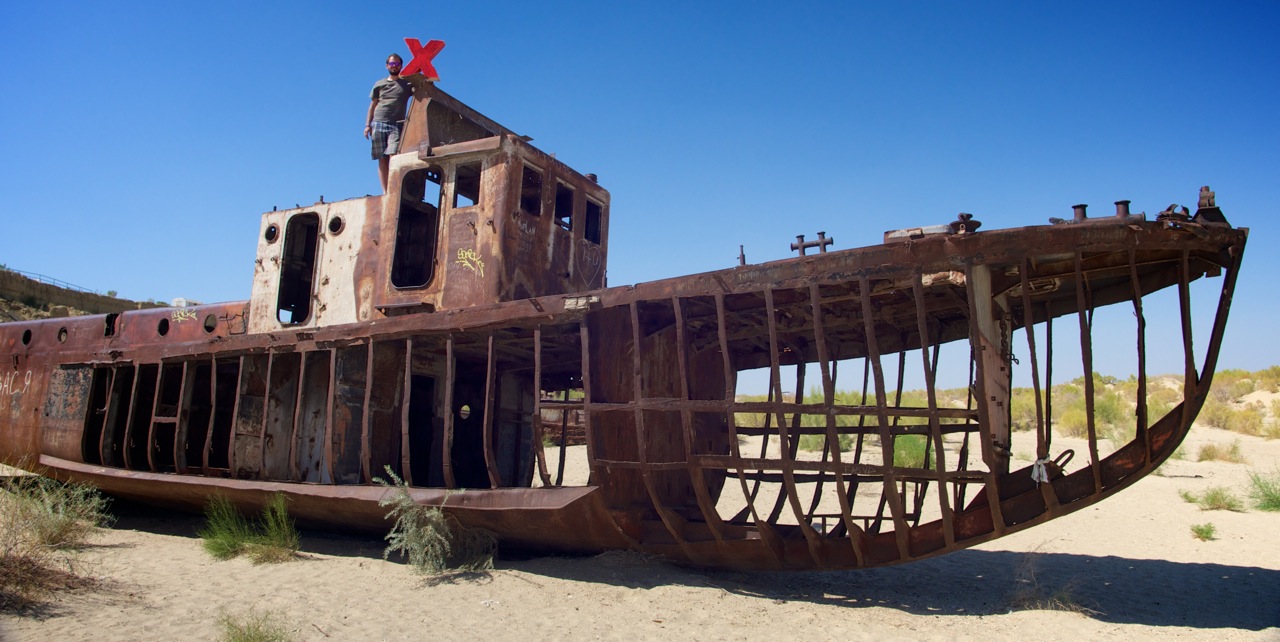 The x sits atop the remnants of a fishing vessel in the now dried up Aral Sea. Photo: Nate Mook and Steve Garguilo

And then there was that time when Mook and Garguilo noticed a strange smell that started giving them headaches. Turns out their car had been leaking fuel for days, and it finally broke down in a small town in Belarus, where they found a mechanic and explained their problem by playing charades. “Everyone was always super helpful and interested in us,” recalls Mook, “because they were surprised to to see foreigners driving through their cities in a car covered in stickers.”

Though their road trip took a little longer than they expected, Mook and Garguilo both say that their time traveling was enlightening. “Everyone was so eager to meet with us, get to know each other, and swap stories,” says Mook.

So what did people want to talk about? The future. They wanted to share their hopes for their cities and countries, and they wanted to hear outsider’s perspectives too. As Mook puts it, “Despite all of our geographic differences, we’re still all rallied around this same idea.” 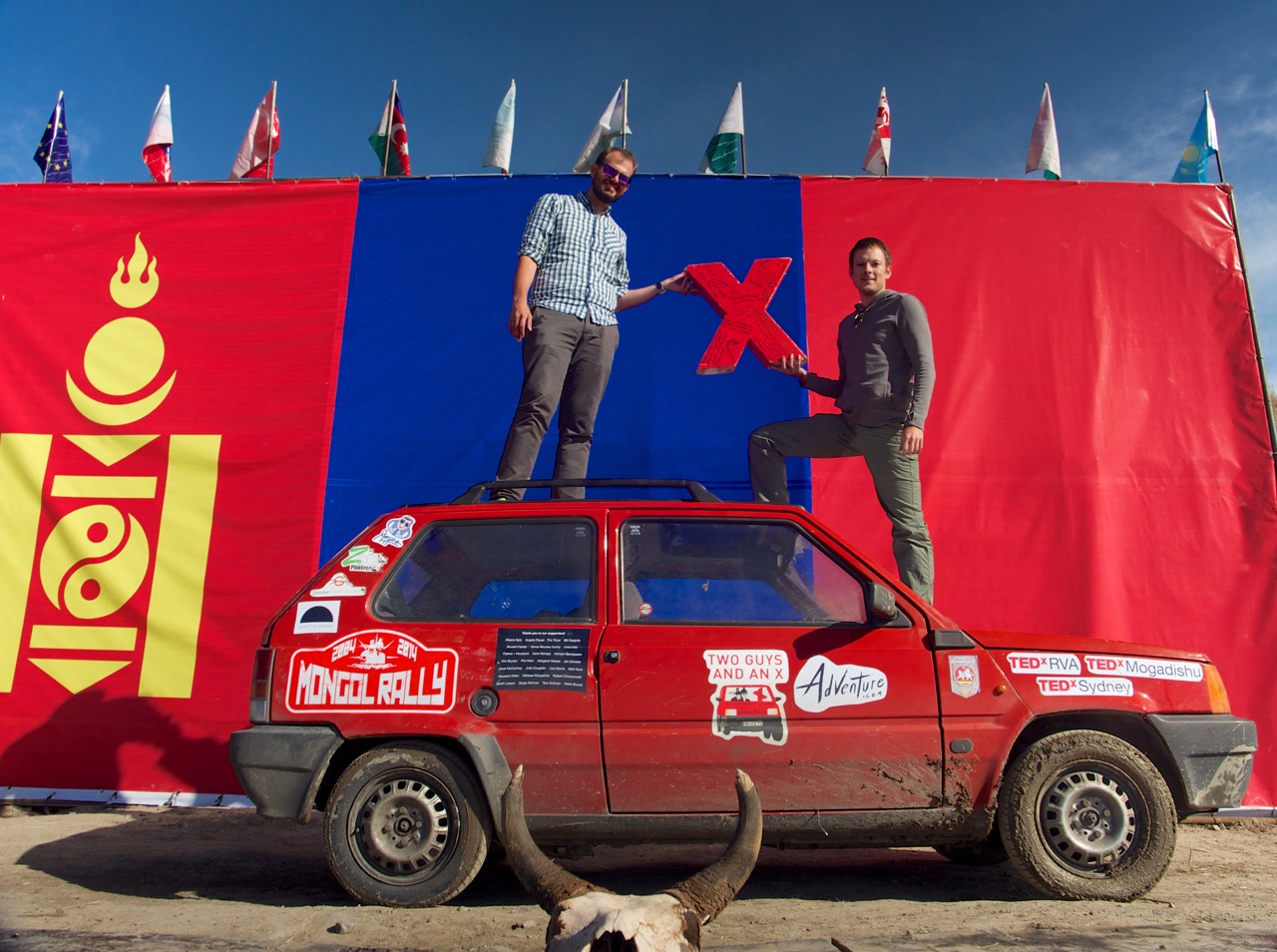 Mook and Garguilo reach the finish line of their journey in Ulaanbaatar, Mongolia. Photo: Nate Mook and Steve Garguilo