“Life makes our planet an incredibly exotic place compared to the rest of the known universe,” says Betül Kaçar. She speaks at TEDMonterey: The Case for Optimism on August 4, 2021. (Photo: Bret Hartman / TED)

TEDMonterey’s final session brought with it a reflection of the magic and generosity of spirit that grew with each talk throughout the week. In a town hall-style discussion, gratitude flooded the stage as attendees took to the spotlight to share which ideas from the conference inspired them most and how they plan to bring a brighter outlook back home and to their own communities. To close out the conference on a note of hope and possibility, five speakers shared a spectrum of uplifting ways to soar into the future. 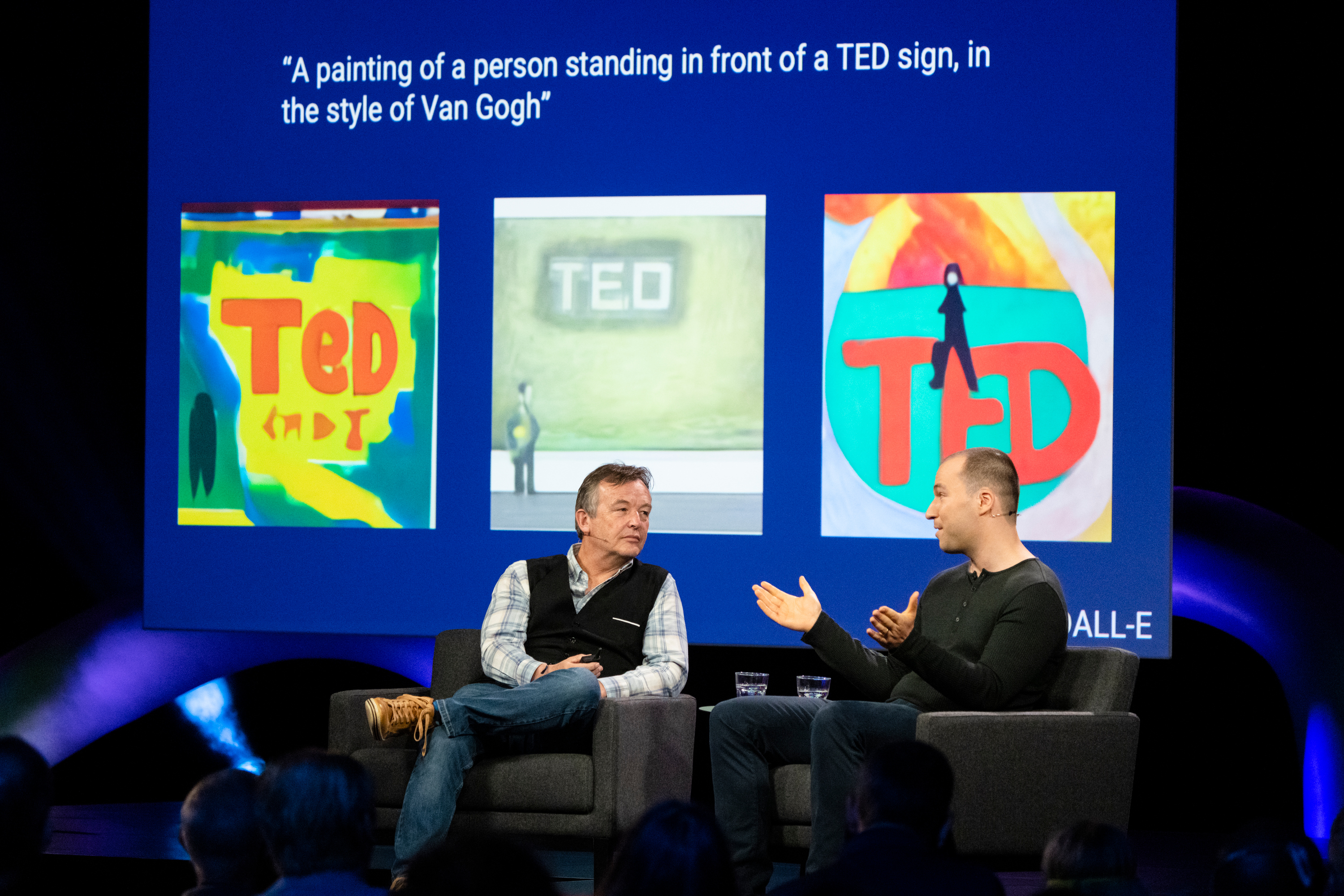 Host Chris Anderson speaks with Greg Brockman about the not-so-distant future potentials of AI at TEDMonterey: The Case for Optimism on August 4, 2021. (Photo: Bret Hartman / TED)

Programmer and engineer Greg Brockman, in conversation with head of TED Chris Anderson

Big idea: The dawn of AI may not be playing out like people predicted, but it’s still developing promising applications.

How? Looking at current examples of artificial intelligence — head-scratching art, at-times laughable wordings — Greg Brockman believes that we should already view it as a time capsule, a moment froze in time when generative AI was young and naive. On the TEDMonterey stage, he shares the burgeoning potential displayed by these advancing neural networks and explains why these systems should be seen more like an “autocomplete” function rather than a declaration of unprecedented creativity. What really excites Brockman is the spark of understanding and glimmer of real intelligence already peeking through in these early days, and the how that can be directed and built upon. One such example is OpenAI Codex, an AI that has seen the entire internet and all the public source code it’s built from, which is being used to develop a helper product in partnership with GitHub and Microsoft for programmers. But one query hangs over the AI industry: How do you prevent unintended consequences with something that will one day be so powerful? Brockman believes this is a question in need of heavy consideration, an essential piece of the puzzle when it comes to moving forward with AI. So, while things like fabricated images of dogs giving TED Talks may seem like quaint and humble beginnings today, we must remember leading with humanity will be critical to society’s tomorrow.

Big idea: We have a moral obligation to be optimists.

Why? Every great breakthrough has required some sense of optimism, says Kevin Kelly. Quite simply: if people didn’t believe something was possible, it would have never gotten off the ground. With this idea as his lodestar, Kelly is a proponent of what he calls a “protopia” — not a delusional utopia, but rather a world where things get better incrementally, yield more good than bad and supply us with more reasons to hope than to fear. Three factors support this form of optimism: first, from life expectancy to decreased rates of violence, it is a fact of history that things have been getting slightly better over the decades; second, our capacity to solve problems will grow as we pass on the world to future generations; and third, problems are opportunities in disguise, landscapes that help push humanity forward. If we want to shape the future for the better, Kelly says, we first have to believe we can do it.

Amir Nizar Zuabi introduces us to Amal, a giant puppet who is walking across Europe to share her perspective on the refugee experience. He speaks at TEDMonterey: The Case for Optimism on August 4, 2021. (Photo: Bret Hartman / TED)

Big idea: New models of storytelling can help us re-engage with the global refugee crisis and honor the journey that hundreds of thousands of refugees have taken in search of safety.

How? Amir Nizar Zuabi seeks to challenge the narrative around refugees. As a theater practitioner who works in Palestine, he tells stories that capture the complexity of the refugee experience — both its beauty and hardship. For his latest project, Zuabi partnered with the theater company Good Chance to create an experience that honors the hundreds of thousands of people who have traversed the European continent since the height of the refugee crisis in the summer of 2015. “The Walk” is a roaming festival that follows a nine-year-old girl from Syria named Amal, represented by a giant, life-like puppet, as she makes her way literally step-by-step across Europe from Syria’s border with Turkey to Manchester, England. It’s an uplifting portrayal of the refugee journey and a reminder of the creativity and community that shared experiences of art can provide.

Big Idea: Understanding the chemical circumstances that create life could help us seed it in other parts of the cosmos.

Why? “Life makes our planet an incredibly exotic place compared to the rest of the known universe,” says Betül Kaçar. Recognizing the unique opportunity we earthlings have to study how life forms from nonliving materials, she emphasizes how close we are to understanding the chemistry behind life, including how it develops under a broader array of circumstances — and in other parts of the universe. Kaçar and her lab engineer ancient DNA and environments to understand the recipe of life and the link between living and nonliving materials. Inviting us to imagine cultivating life on other planets, she asks: What if instead of bringing Earth’s life to other parts of the universe, life could be created from the materials that already exist there? With her extraordinary propositions come extraordinary quandaries that dig deep into the purpose of life — and bring with them the ethical dilemmas of spreading life throughout the cosmos. Kaçar asks us to look up and broaden our gaze, because the possibilities of life are endless. 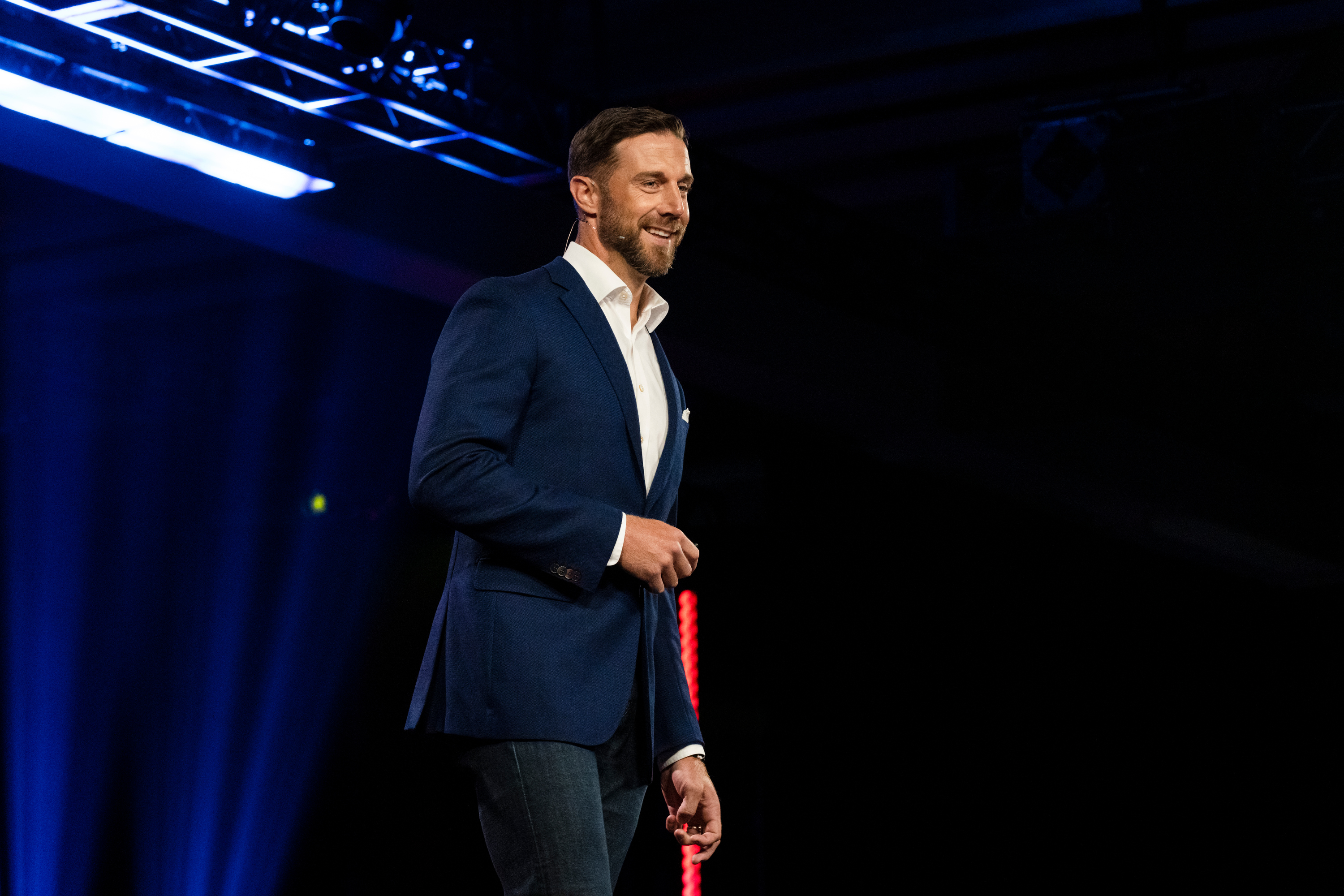 Alex Smith tells the TED audience about the exact moment his life changed forever. He speaks at TEDMonterey: The Case for Optimism. on August 4, 2021. (Photo: Gilberto Tadday / TED)

Big idea: To get through the anxiety of life’s challenges and setbacks, hold onto the people and things that inspire you to dream and live fully.

How? As Alex Smith awoke in the hospital after a catastrophic injury that all but destroyed his leg, his doctor broke the bad news: “Flesh-eating bacteria is crawling up your leg,” he said. “It’s getting closer to your vital organs every minute.” At that moment, as at many points throughout his career, Smith felt deep anxiety and fear. Taking us on his road to recovery that required around-the-clock medical care and intense physical therapy, he shares how he was able to mentally recover by leaning on the wisdom and support of those around him. From his former coach Jim Harbaugh, he remembered to stop worrying about the pressure. From his teammate Blake Costanzo, he learned to focus on living  every moment as it came. From his wife, he understood that he needed to face his fears head-on in order to deal with them and move forward. “I’ve learned that so much of the anxiety that holds us back is self-inflicted. And it’s ok if we need someone else to help us,” he says. “You might not have a leg like this. But I bet you’ve got some scars. And my hope for you is this: look at them, own them. It’s the best reminder you’ll ever have that there’s a whole world out there, and we’ve got a whole lot of living left to do.”