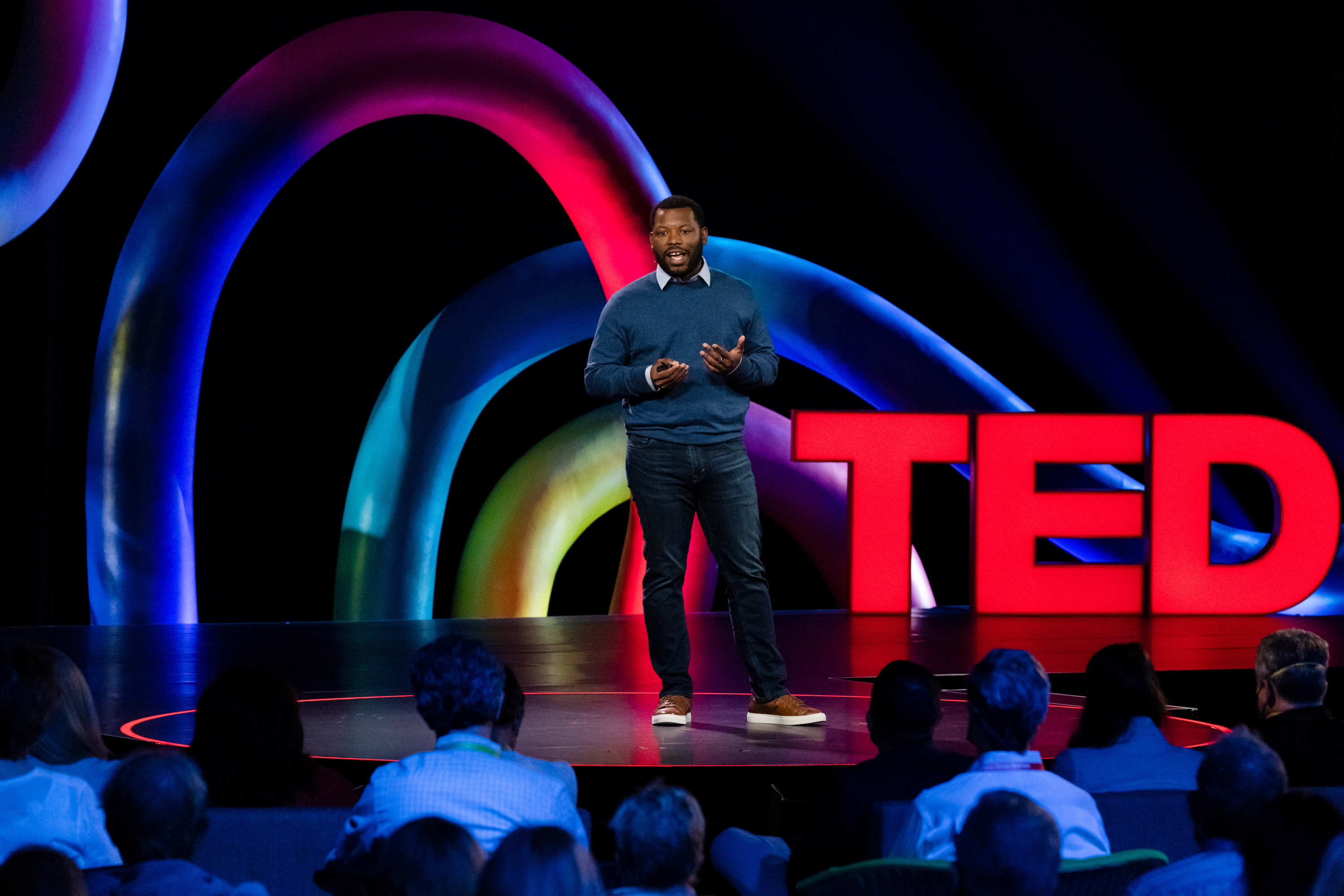 The solution to accessible childcare is closer to home than we think, says Chris Bennett. He speaks at TEDMonterey: The Case for Optimism on August 3, 2021 (Photo: Gilberto Tadday / TED)

With much of the world’s population living in large, congested cities, urban life can get messy. Session 6 brings together six speakers who are solving the inefficiencies of city dwelling and finding new, smarter ways to live together — from futuristic transportation to transformative early education and an ingenious plan to combat e-waste.

Music: Joan As Police Woman sings a gorgeous, tender melody about the  beauty of singing together, followed by a love song “for everybody who loves love.” 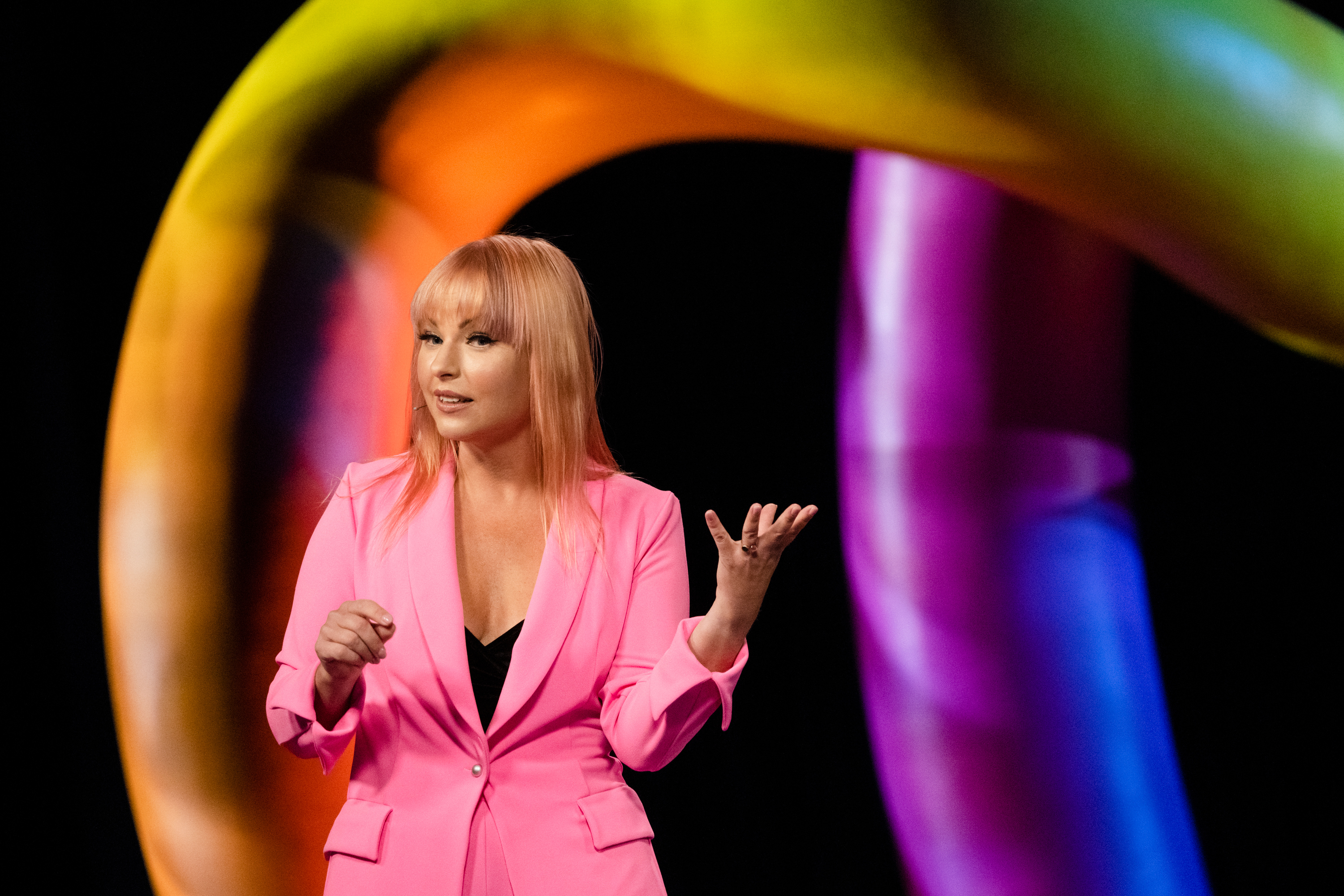 “Imagine never having to fill in any immigration forms ever again,” muses Karoli Hindriks at TEDMonterey: The Case for Optimism on August 3, 2021. (Photo: Bret Hartman / TED)

Why? Growing up under Soviet occupation, Estonian entrepreneur Karoli Hindriks questioned why the barriers of global travel are so high. Passports create more friction than mobility and, thanks to clunky bureaucracy, are in desperate need of a 21st-century makeover. Hindriks looks to Estonia’s digital citizenship for inspiration, which transformed the small country from one of the poorest in the world to an innovative, digital-first democracy. From voting to marriage and divorce, everything an Estonian does can be done online. She highlights the “once-only rule,” which requires users to upload their data to the system just a single time and could be a fundamental piece of modernized passports. “Your passport describes you as a resident of your country,” she says. “We say you’re a citizen of the world. A universal digital passport — one that would go beyond borders — will help move towards a world where crossing borders is not about waste of time and waste of resources.” 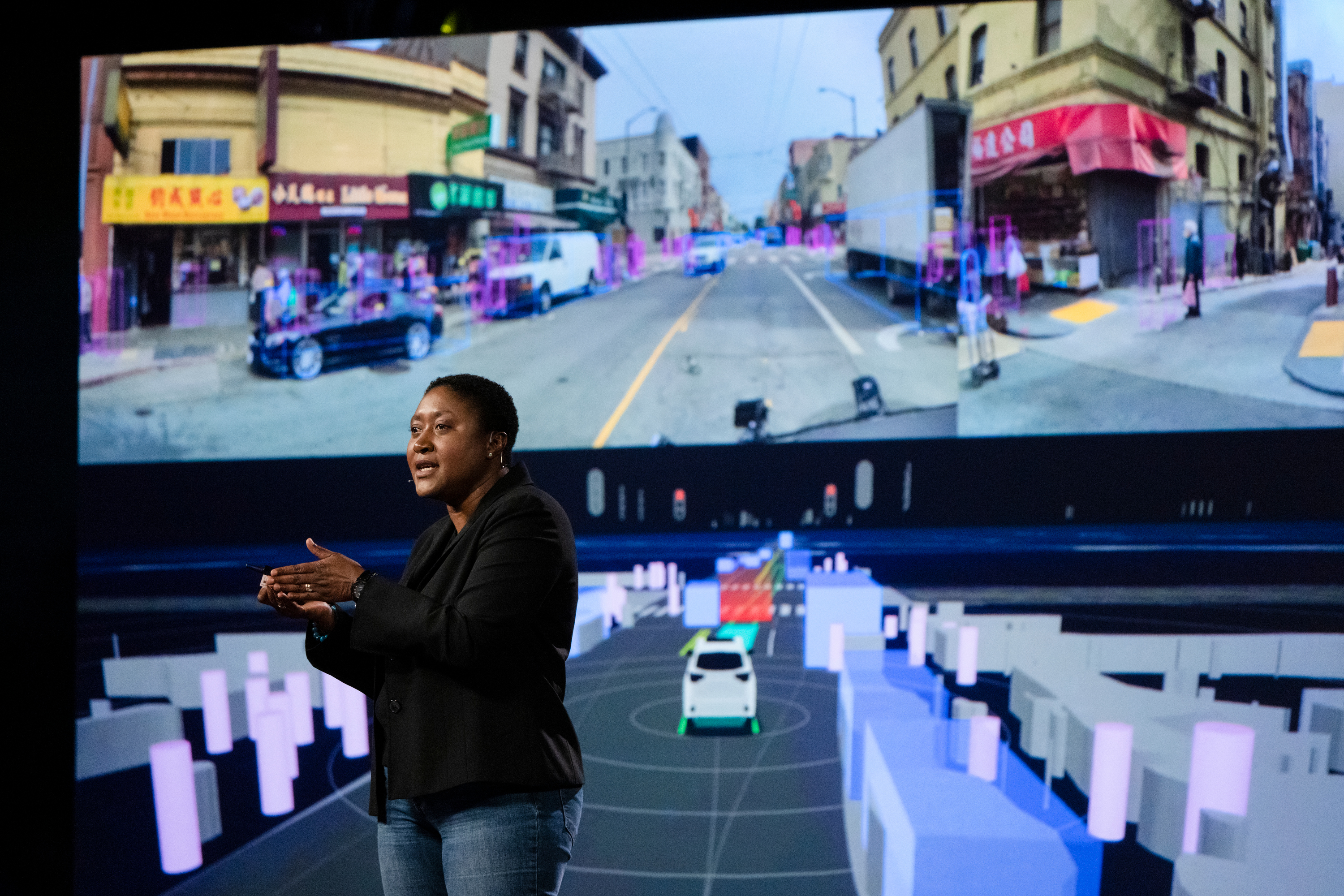 Aicha Evans explains how one day, we’ll be hailing robotaxis. She speaks at TEDMonterey: The Case for Optimism on August 3, 2021. (Photo: Bret Hartman / TED)

Big idea: A revolution in transportation is on the horizon — and it’ll be driven by robotaxis.

How? We’ve been hearing about self-driving cars for years. But Aicha Evans, the CEO of Zoox, thinks we need to dream more daringly. Instead of personal self-driving cars that are wasteful, expensive and traffic-generating, we need to invest in self-driving shuttles that will take up less space and transport more people. These “robotaxis” will be powered by recent advances in computer vision that analyze real-time representations of the world. By supplementing computer vision with additional sensors, such as predictive LIDAR technology, night vision, thermal imaging and remote human assistance, Evans believes we can soon shift from problem-solving to problem-preventing — and drastically cut down on car crashes. There’s still much to do to create unfailingly safe driverless shuttles, she says, but the promise of computer vision is simply too alluring to not act upon.

Big idea: The future of transportation is about to get (hyper)loopy.

How? History is full of ideas that have flopped and flourished — and Josh Giegel believes the opportunity to get hyper-speed transportation right should not be squandered. His team at Virgin Hyperloop have created a pod that speeds through a vacuum-sealed space roughly the size of a subway tunnel. This design increases velocity by diminishing friction, transforming too-long journeys and commutes from hours into minutes. Building upon the ingenuity, dedication and the infrastructure necessary, he’s dedicated his career to the hyperloop, showing us its already promising results. Giegel shares how making this vision a transportive reality, while no easy feat, could pay off big time for cities looking to move forward, faster into the future.

Big idea: The solution to accessible childcare is closer to home than we think.

How? People often think “real” learning starts in kindergarten but, in reality, kids begin learning much earlier. In the crucial developmental years from ages zero through four, parents typically have three choices for childcare: a costly program, a family member or a trusted neighborhood caregiver. Local caregiving is where Chris Bennett sees the most benefit, opportunity and affordability for parents living in childcare deserts, where they’re often forced to choose between their children and careers. He founded Wonderschool, an organization that helps get childcare hubs up and running with state-approved professionals, such as social workers, retired teachers, nurses and passionate educators. Instead of building new, expensive commercial spaces, Bennett explains the benefits of revitalizing home-based childcare programs with certified lesson plans, conducted from the verified homes of people who are dedicated to setting up kids for a successful childhood — right around the corner.

How? Gay Gordon-Byrne is a self-proclaimed “repair geek.” She grew up tinkering with gadgets alongside her dad, experiencing the thrill that comes with bringing a gizmo back from the brink. Now she’s a driving force behind the “right to repair” movement, which aims to make it easier for people to fix all kinds of stuff — from computers and cell phones to tractors, appliances and other electronic products. Over the last 20 years, many manufacturers have made it increasingly difficult for consumers to repair or modify their devices, keeping the necessary tools, parts, instructions and software in their sole possession. This means spending more to buy new stuff and contributing to a growing problem of electronic waste that also widens the digital divide where millions of students go without workable, refurbished devices. The good news? Gordon-Byrne says we are finally beginning to shift away from our throw-away culture by passing right-to-repair legislation and creating jobs in the growing repair workforce. 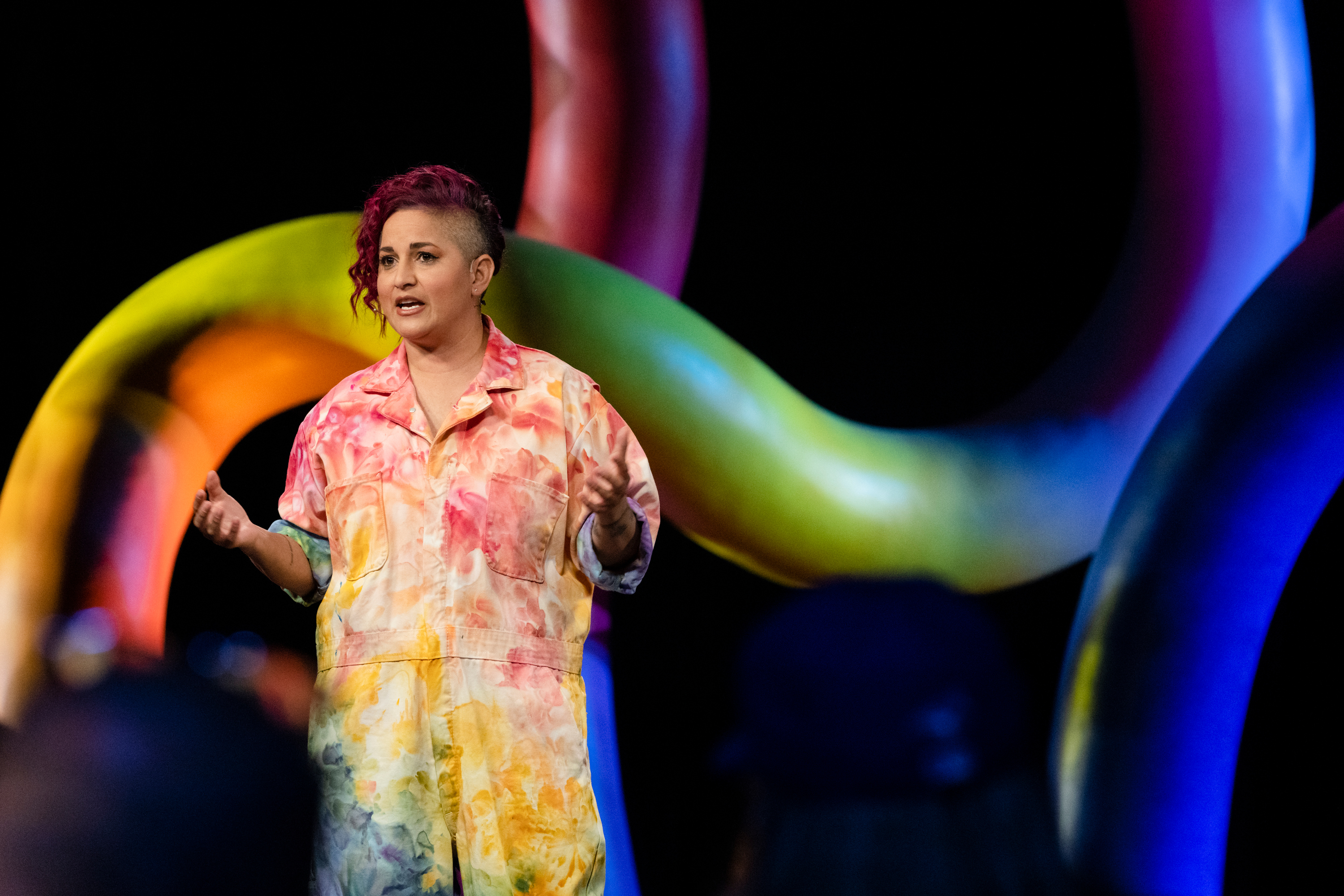 Irma L. Olguin Jr. describes the joy of underdog cities — and presents an innovative plan to rejuvenate them. She speaks at TEDMonterey: The Case for Optimism on August 3, 2021 (Photo: Gilberto Tadday / TED)

How? Computer skills aren’t what’s stopping people from breaking into the tech industry, says Irma L. Olguin Jr. Instead, things like childcare, transportation, hunger and money more often create the biggest hurdles. Her company, Bitwise Industries, focuses on removing these obstacles and providing the resources that make success possible for everyone: job training, real world experience, financial support and community. Bitwise helps people develop talent by taking into account the reality of their lives and providing things like free transit, childcare options and food. Importantly, they also hire tech students as apprentices during their training, so they can begin building their resume. These investments in talent result in improvements for the entire community, she says. By investing in people and paying them like it’s their job to learn, Olguin Jr. is encouraging the entire tech industry to address inequality and elevate “underdog” cities all over the world.