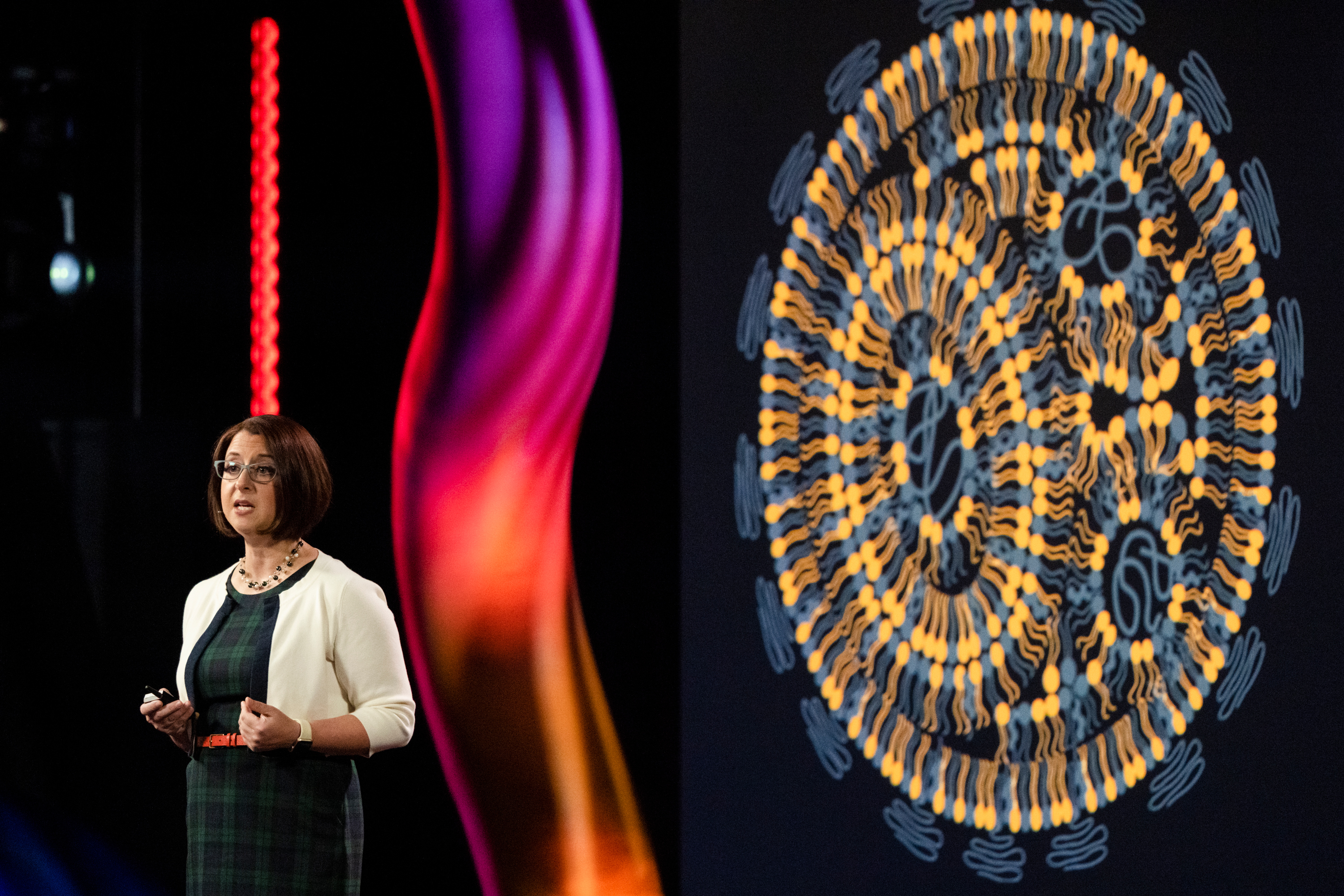 Engineer Kathryn A. Whitehead takes us down to the nano level to break down how lipid nanoparticles could revolutionize the way vaccines our delivered to our body’s cells. She speaks at TEDMonterey: The Case for Optimism on August 2, 2021. (Photo: Bret Hartman / TED)

The central topic of Session 3 is, surely, on many of our minds: health. From the technology powering the Pfizer-BioNTech COVID-19 vaccine to new Alzheimer’s treatment possibilities, these amazing speakers give a glimpse at exciting new frontiers of medicine. Plus, an artist drawing live onstage!

Big idea: When COVID-19 first reared its many-crowned head in January of 2020, immunologists Özlem Türeci and Uğur Şahin saw an opportunity to develop a vaccine at “light speed,” using revolutionary mRNA technology to turn the body’s own immune system into a COVID-fighting factory.

How? Türeci and Şahin’s development of the first approved COVID-19 vaccine impacted the lives of millions — if not billions — of people worldwide, who were previously defenseless against the deadliest virus to hit humanity in a century. The husband-and-wife team had started their firm BioNTech as a way to bypass the glacial channels of traditional research, and thus were uniquely suited to bring a vaccine to market quickly. Their revolutionary approach used messenger RNA (mRNA) to address the body’s immune system at the cellular level, compiling chemical source code to “teach” cells how to produce antibodies personalized to each patient. As Türeci puts it: mRNA strands are the “generals which call all the different special forces and train them on the wanted poster of the attackers.” And far from being effective only against COVID-19, mRNA therapy offers the promise of individually adaptable treatments for a variety of cellular disorders, including cancer.

Big idea: Messenger RNA (or mRNA) is about to change the world forever.

How? After years of research, Kathryn A. Whitehead and her team have finally created the perfect vehicle for delivering life-saving yet delicate mRNA information through vaccines: lipid nanoparticles. She takes us down to the nano level to break down this fatty packaging into its four key ingredients: phospholipids, cholesterol, ionizable lipids and a polymer called PEG. These components make up the ideal “shipping materials” for delivering life-saving vaccines to our body’s cells. Amazingly, her work is paving the way for mRNA therapies that can treat or cure diseases that have unrelentingly plagued us, including cancer, Type 1 diabetes, muscular dystrophy and cystic fibrosis as well as the flu, malaria, Ebola, Zika and HIV. As she puts it: “mRNA therapies are going to usher in a new era of medicine in human health forever, and it’s all thanks to these fatty little balls that deliver this miracle medicine to exactly where it needs to go.” 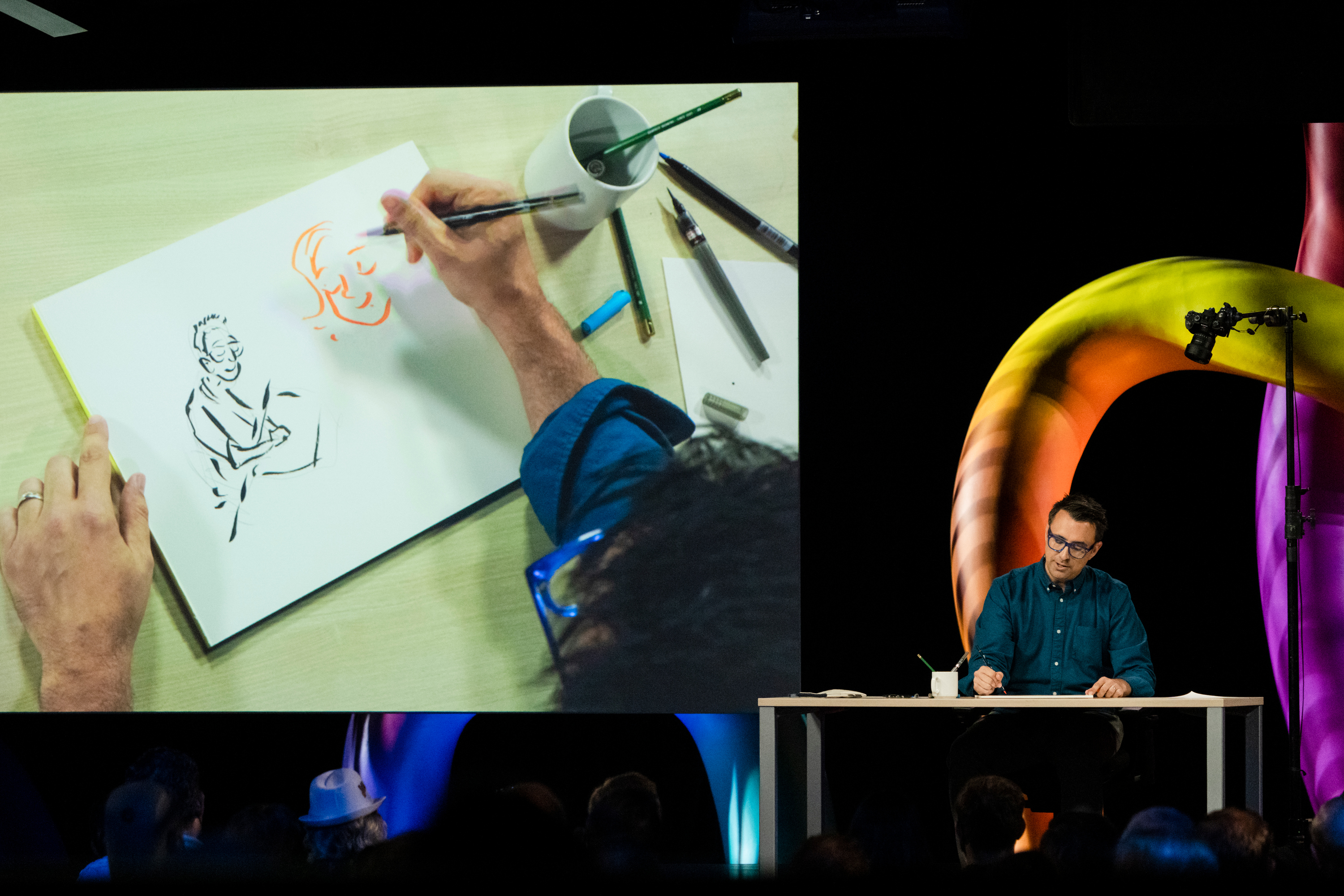 Jarrett J. Krosoczka delights the crowd with live drawing presentation paired with a poignant autobiographical journey. He speaks at TEDMonterey: The Case for Optimism on August 2, 2021 (Photo: Bret Hartman / TED)

How? Equipped with sheets of paper and a mug full of markers, Jarrett J. Krosoczka takes us on an autobiographical journey during a live drawing presentation. He begins by drawing his younger self surrounded by his grandfather and the ancestors he was introduced to through family stories. Krosoczka used his sketchbook as a means of escape from the chaos of his upbringing and as a way to connect with his incarcerated mother, who was also an artist. As a teenager, he volunteered at a camp for children with cancer, befriending a four-year-old boy named Eric who had recently been diagnosed with Leukemia. Krosoczka’s drawing of Eric is vibrant, depicting the boy with a Power Rangers sword in hand and a huge grin. Krosoczka shares the difficulties of recounting his experience at the camp in his graphic memoir, Sunshine, and how its creation forced him to come face-to-face with unspoken losses. While this can be painful, he explains, stories are an opportunity to understand the human experience, deal with absence and bring loved ones back to life on the page.

How? Failure to launch, or the inability to build and maintain sexual momentum, is a common problem plaguing the couples who work with sex therapist Ian Kerner. His solution? An “arousal runway” of psychological stimulation. In other words, he suggests getting the mind in on the action before anything physical begins. For couples dealing with shame around sex, he recommends starting with side-to-side experiences like listening to a sexy podcast together or reading literary erotica aloud. Other couples might try face-to-face experiences, such as sharing sexual fantasies to bring some psychological stimuli back into the relationship. After a year spent in a pandemic (and in our pajamas), Kerner reminds us that if we’re not feeling super sexy, there’s nothing wrong with our libidos — we just need to try some new strategies to get the sparks flying.

Big idea: A promising approach to Alzheimer’s and dementia treatment lies in a mind-blowing (or rather, mind-healing) application of gamma wave stimulation.

How? Of the many signals that fire our synapses, the brain relies on gamma frequencies, or waves, to coordinate cellular activity and keep everything in sync. So when these specific brain waves become weaker, it is often an early indication of dementia or Alzheimer’s. In seeking to understand and treat this degenerative disease, Li-Huei Tsai and her team asked an intriguing question and found promising answers: What if we artificially boosted the brain’s gamma waves? They started with mice and, through light and sound stimulation carrying the gamma frequency, discovered profound benefits, such as improved memory and less brain decay. But as Tsai says, mice are nice … but people are the point. Now they’re testing on humans with an at-home device that emits the same gamma output and the results, so far, are exciting: reduced brain atrophy, improved mental function and increased synchrony. While it’s early days and there’s still work to be done, she’s already seeing a lot of evidence that this approach seems safe and that humans tolerate gamma wave stimulation well — meaning this non-invasive treatment could prove accessible for those who need it and usher in a better world and brighter future for everyone.

Big idea: The future of regenerative medicine is personalized.

How? What if diseases could be treated with a patient’s own cells — precisely and on demand? This may sound like science fiction, but through personalized, stem-cell-derived therapies, Nabiha Saklayen says this future is closer than we think. How could this work? The answer lies in automation through machine learning. Currently, stem cells are painstakingly difficult (and expensive) to engineer, requiring scientists to manually remove unwanted cells from stem cell cultures. Saklayen describes how we could leverage physics, biology and algorithms to scale up an alternative, affordable approach — gathering the perfect culture of your own personal stem cells by utilizing the precision of a computer. Imagining a revolution in personalized pharmaceuticals, forecasts a world where every person could have a personalized bank of these cells to be used as needed.