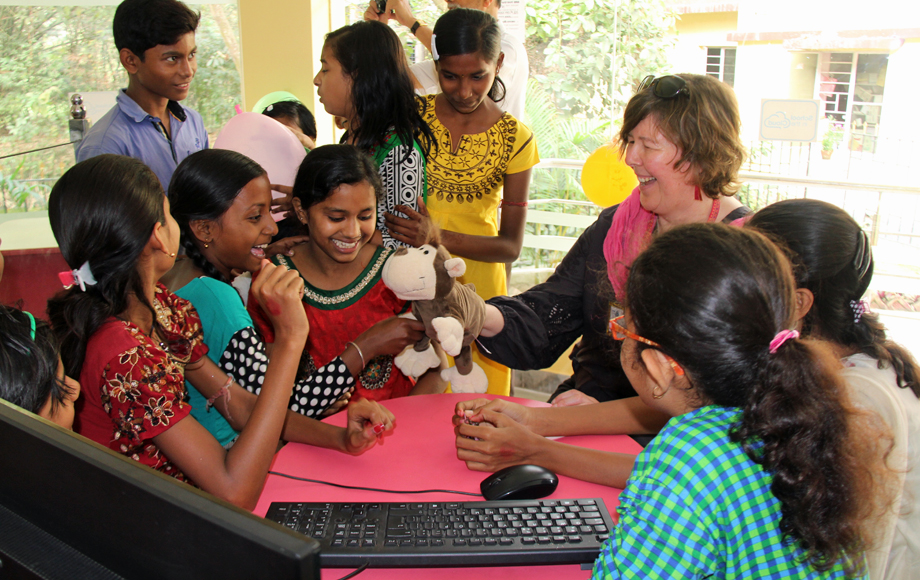 Normally, “Skype Granny” Lesley Keast  lives in Spain and appears as a giant face on a screen in the School in the Cloud learning lab in Gocharan, India. But in the days before the first-ever School in the Cloud conference, she got a chance to visit the lab and meet the students she’d been mentoring from afar. Photo: Sarah Schoengold

“Let’s skip ahead and assume that children of the future are always connected,” said education innovator Sugata Mitra. Thinking out loud about the evolution of screen sizes and the future of wearables, he came to the conclusion: “The Internet is a subject as important as science or mathematics.”

Mitra shared this in a presentation at the first-ever School in the Cloud conference, held in India last February. The conference brought together those who’ve been a part of the education initiative — which encourages kids to explore interesting questions online — since Mitra founded it with the 2013 TED Prize. The school now consists of eight learning labs in India, the UK and US, and an online platform that lets students anywhere participate with the help of retired educators who guide sessions over the cloud. In the five days before the conference, 15 of these “Skype Grannies” gathered to tour four labs in India with Mitra. Traveling by plane, boat and rickshaw, they got a chance to meet the students they’d been working with face-to-face. By coincidence, the tour took place on the eve of the Saraswati Puja festival, which celebrates the Hindu goddess of learning.

In his presentation at the conference, Mitra shared four stories from the tour — each from a different lab, and each centered around a question that pushed attendees to think about the future of education. Below, the stories and the questions they illustrate.

Is learning to read a form of problem-solving?
From “Area One” in Korakati, West Bengal

In Korakati, the most remote of the School in the Cloud labs, deep in a mangrove swamp, Sugata observed a young boy who knew the English alphabet, but didn’t know how to read or speak English. The boy had watched three older kids playing a game, and wanted to try it on another computer in the lab. So he copied the letters of the web address down on a piece of paper, and searched the keyboard carefully to be able to type the letters. Soon, about six children gathered around him to play the game too.

At first glance, this boy was only playing a computer game. But upon closer inspection, he acted on personal initiative, and solved a big problem in order to make the technology work for him. What this boy did is not reading — but it is learning. This kind of creativity should be rewarded, too, says Mitra.

Does learning have to be direct, or can it meander?
From “Area Two” in Chandrakona, West Bengal

The Chandrakona lab is nestled within potato fields in rural West Bengal. Here, a granny showed four boys a volcano experiment on YouTube that involved baking soda and vinegar. Because of connectivity issues, the boys wanted to download the video, to access in case they lost their connection. But there was a problem: they didn’t know how to download a YouTube video.

One of the boys suggested asking the computer itself. After a bit of Googling, they found a video on how to download YouTube videos. But watching the video required downloading free software, which required an email address. The group was stumped again — none of the boys had email.

Working together, the boys learned how to create a fake email address. They downloaded the software. Then watched the video. And finally, downloaded the volcano experiment video. By working as a team and going step-by-step, says Mitra, they learned so much in addition to the science behind a chemical reaction. 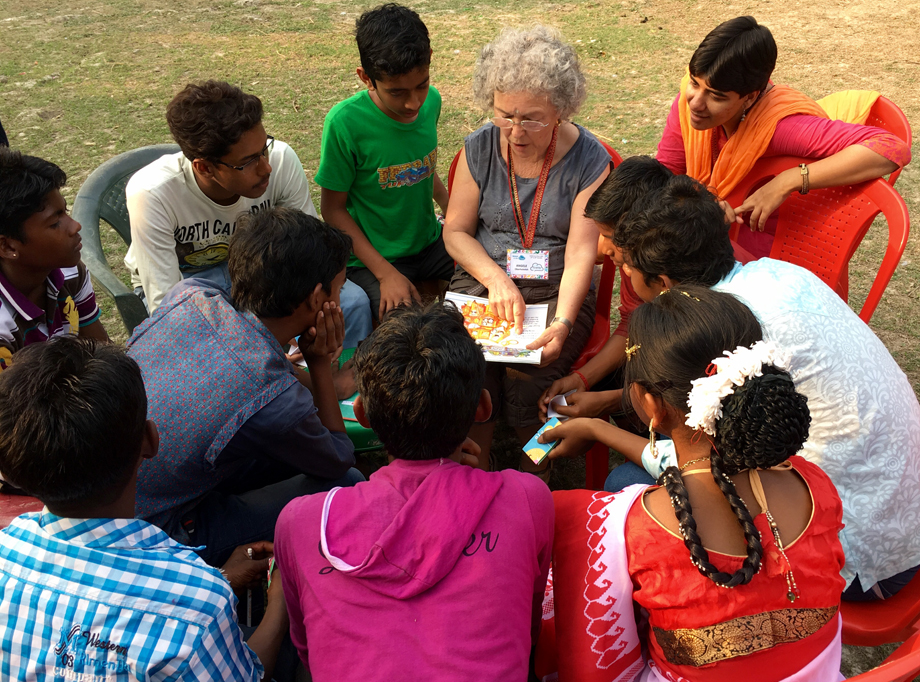 A group of Skype Grannies toured four School in the Cloud learning labs in India with TED Prize winner Sugata Mitra. Many of the moments they witnessed became stories that Mitra shared in his keynote presentation at the School in the Cloud conference. Photo: Sarah Schoengold

How do peers spark each other to learn?
From “Area Zero” in Gocharan, West Bengal

“Area Zero” is the School in the Cloud’s flagship TED Prize lab — a sleek, solar-powered learning lab set amid palm trees. There, a boy demonstrated an interactive computer program that he’d taught himself to code — a “chatbot” that lets the computer carry on basic conversations in English. At the program’s prompting, Mitra typed in his name. “Hi Sugata,” the computer responded. The computer asked where he lives, and Mitra asked the same of the program. “I live in Gocharan, inside a computer,” the chatbot answered.

The program piqued the interest of several younger children at the lab, and sparked several to experiment with coding on their own. This made coding a focus of their School in the Cloud sessions. Mitra points out that no one had to plan lessons to teach the topic. Instead, the kids were so inspired, they felt compelled to teach themselves.

What can students learn from teaching?
From “Area Four” in Phaltan, Maharashtra

In the bustling city of Phaltan, the School in the Cloud lab sits within a traditional school, and kids participate in a session each week. Here, a group of students puzzled over a hard question, not quite finding what they needed online. When a group of older students walked by an open window, the younger students asked for their help. The older kids jumped in. But instead of showing the younger kids where to look, the older students employed “the Granny method,” and provided encouragement as the children circled in on a promising direction themselves.

The younger students learned about the problem at hand, says Mitra, but the older children learned too. They got an active lesson in how to give guidance, and sharpened their own skills for locating information.

Mitra’s point in telling these four stories: Traditional education is based on testing and assessment, but many things that have a big impact on children aren’t easily measured. The School in the Cloud pushes education toward something more thematic and fluid. Mitra describes it as “learning at the edge of chaos,” and measuring chaos — or curiosity, for that matter — is no easy task. 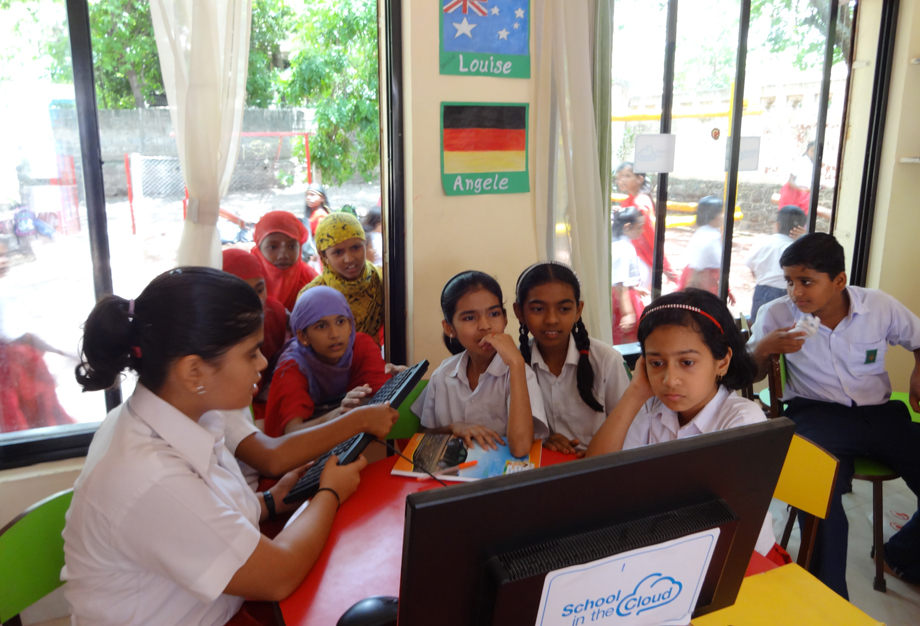 When these students at the School in the Cloud lab in Phaltan, India, felt stumped on a question, a group of older students popped their heads through a window and offered encouragement. Photo: Sarah Schoengold

Want to be a part of the next chapter of School in the Cloud? Learn more »