“I have absolutely no regrets that I voted for Trump and that he’s our president right now,” says economist Diana Furchtgott-Roth, at right, in conversation with TED curator Chris Anderson, left, and Eliot A. Cohen at TED Dialogues, March 8, 2017, New York. Photo: Ryan Lash / TED

At TED HQ in New York on Wednesday, TED curator Chris Anderson moderated a lively conversation between Eliot A. Cohen, professor of strategic studies at Johns Hopkins University who served in the State Department during the George W. Bush administration, and Diana Furchtgott-Roth, an economist and Manhattan Institute Senior Fellow who held positions in the Ronald Reagan, George H.W. Bush, and George W. Bush administrations and was on the Trump campaign and transition team. Although Cohen and Furchtgott-Roth both consider themselves conservatives and agree that health care, climate change and terrorism are among the most important issues facing the country, they remain sharply divided on President Trump.

Character is destiny, says Cohen, borrowing a quote from Greek philosopher Heraclitus. And in Cohen’s opinion, Trump displays weaknesses in temperament and character that undermine his leadership. “Sooner or later, in every presidency, there comes a moment when he has to go into the Oval Office, sit behind the Resolute desk, and say, ‘I’ve decided to do something serious’ — usually involving the use of force — ‘and the reason I’m doing it is XYZ,’” says Cohen. “He has to be believed. And the people who didn’t vote for him, the 53%, will have to give him the benefit of the doubt.” Trump’s actions and statements, Cohen argues, seem to be “setting up for a situation in which the president does not deserve the benefit of the doubt.”

Trump’s economic policies are more important than character, contends Furchtgott-Roth. “I believe they’ll lead to economic growth that gets more young people into the workforce, reduces our debt, lowers taxes, brings more companies back to the US, gives us more school choice, and gets us more of the things we all want.” She singles out the president’s support of mandatory paid maternity leave, a pro-women measure and one usually favored by progressives. Even though some Americans may be displeased by Trump’s behavior, she points out, “People wanted something different. They wanted someone who gets up in the morning and tweets, who goes around to all his hotels.” But will his repeated attacks on the media work against him, Anderson asks? No, she says: “Many people who voted for President Trump like what he’s saying to and about the media, so he’s probably making himself more popular with them.” 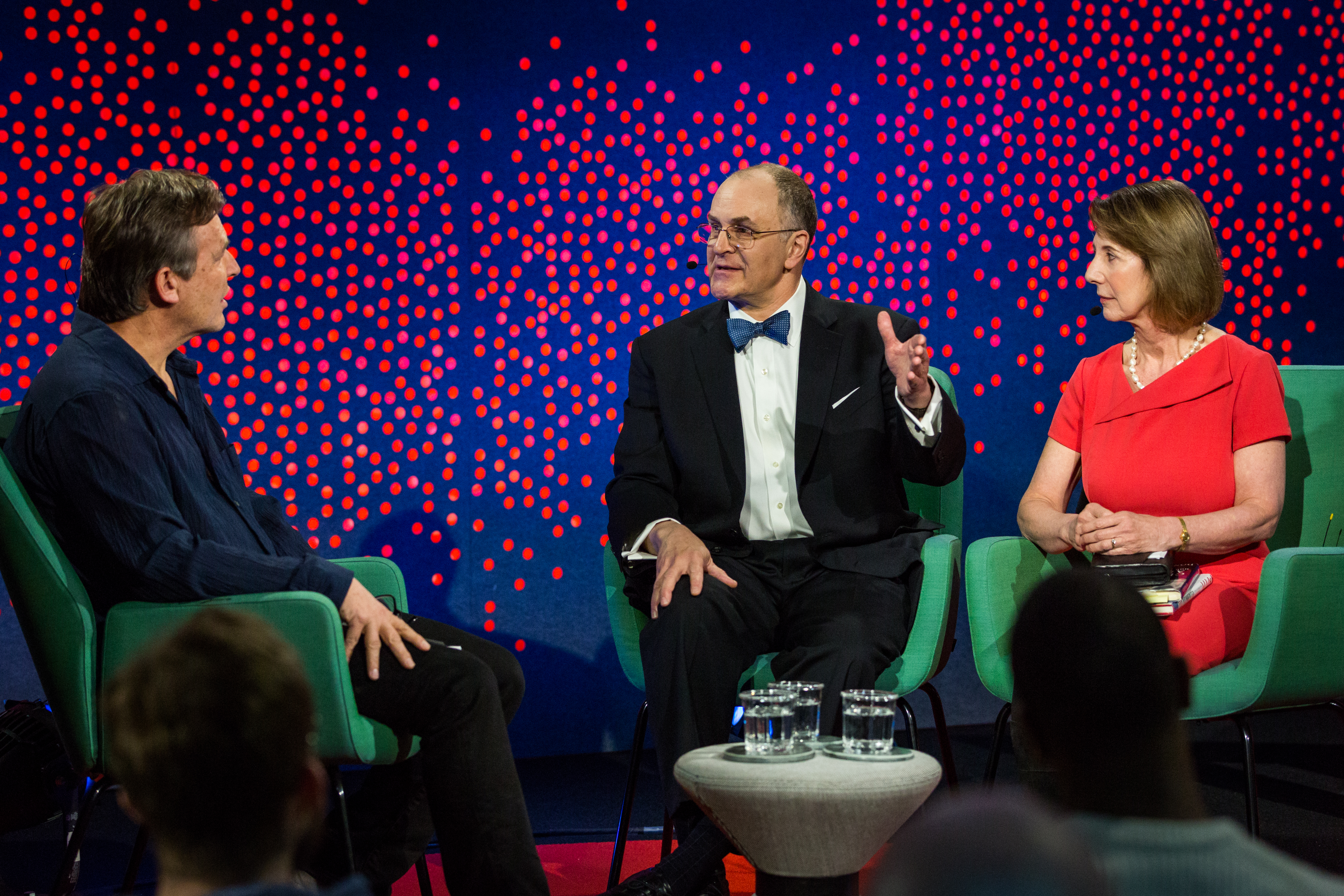 “I was a big fan of Ronald Reagan and George W. Bush,” says professor Eliot A. Cohen, center. “And I don’t think they thought of our country as crippled and that our greatness was in the past.” TED curator Chris Anderson, at left, speaks with Cohen and Diana Furchtgott-Roth at TED Dialogues, March 8, 2017, New York. Photo: Ryan Lash / TED

Regardless, people dissenting with their political leaders is nothing new, according to Furchtgott-Roth. “Think of any politician you supported, and there will always be something he or she said with which you disagree,” she says. “I see the president as someone whose main function is to sign into legislation the bills that Congress sends him. Congress sent legislation to President Obama that he vetoed time after time, and I believe President Trump will sign into law what Congress sends, something that’s very important.”

It’s not Trump’s veto that worries Cohen; it’s that his authority, for now, rests upon a majority in Congress. “One thing that was very unfortunate about Obamacare is it was passed on a purely partisan basis, and I fear its replacement will be rammed through by the [Republican] majority,” he says. “The Civil Rights Act, Medicare, Medicaid — these were all bipartisan efforts, and if we’re to stabilize our domestic politics and deal with really big issues, it needs to be done in a bipartisan way. For that, you need leadership to be inclusive and to bring people together.”

Another concern: Trump’s approach to foreign relations. Calling for a tougher border policy is entirely reasonable, says Cohen. But the president’s initial immigration ban was “willfully cruel,” and saying that Mexico will pay for a wall between it and America could erode years of careful bridge-building policy between the nations. “We’ve been working for decades, Republican and Democratic administrations alike, to make this a close neighborly relationship,” says Cohen. And while Americans may applaud Trump for his brash tweets — or at least tolerate them — “President Xi Jinping [of China] may have less of a sense of a humor. Reckless statements could lead to conflicts.”

Like Trump or not, we all owe him a chance, says Furchtgott-Roth. “We tried eight years of president Obama, and it didn’t get us the results we need, especially in states where people are really hurting. That’s why people elected Trump — they didn’t want another four years of the same.” And no matter the length of his time in office, politics is cyclical. “Sooner or later, the other side will come back,” says Cohen. He references Johnny Cash’s song “This Old Wheel” — its lyrics go “That old wheel is gonna roll around once more / When it does it will even up the score.” Posing one final rhetorical question to President Trump, Cohen wonders, “Do you want to make any effort to unify the country and find some bipartisan consensus?” Now that would truly be something different.