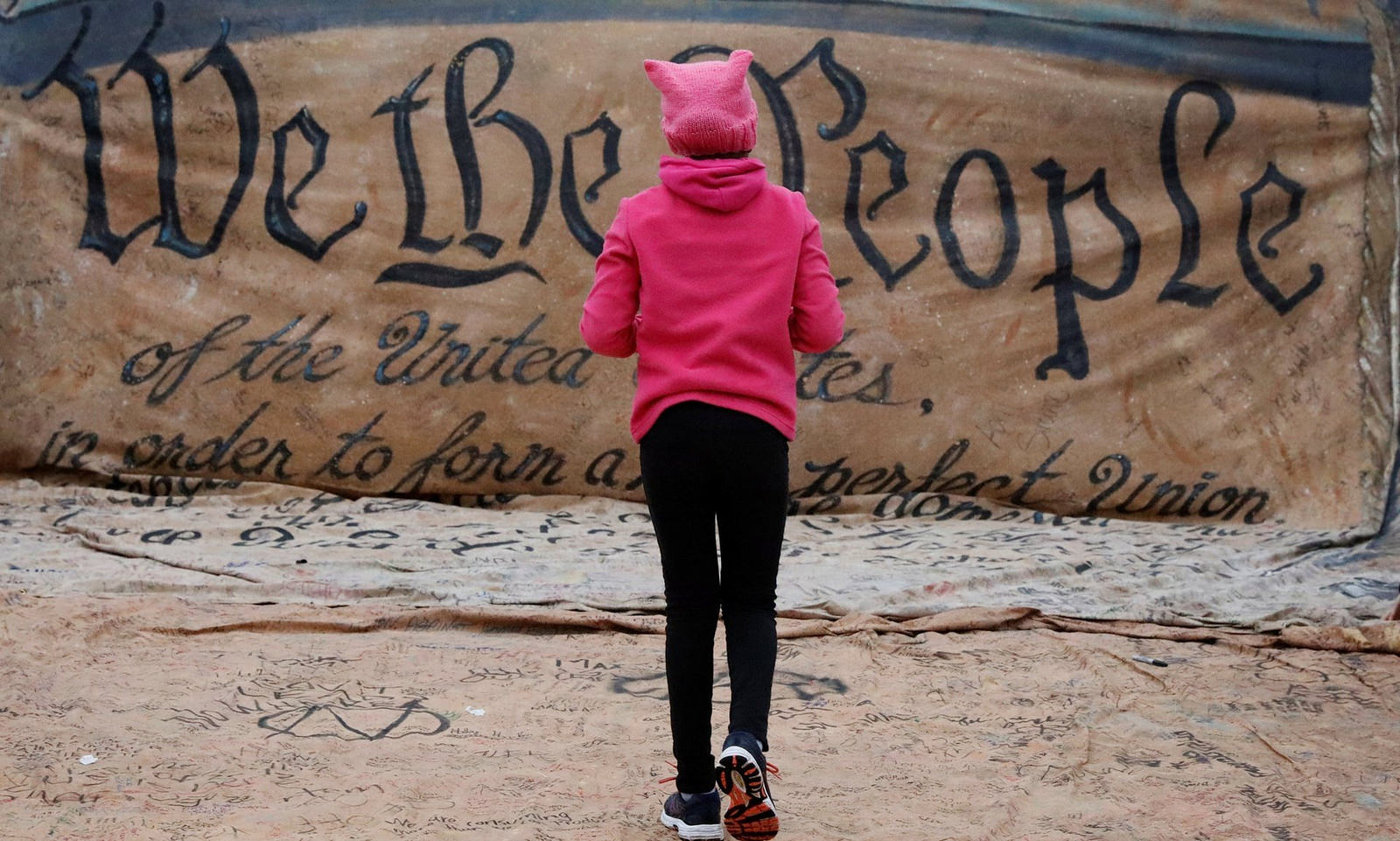 Earlier this month, Merriam-Webster announced that 2017’s word of the year is feminism. Searches for the word on the dictionary website spiked throughout the year, beginning in January around the Women’s March, again after Kellyanne Conway said in an interview that she didn’t consider herself a feminist, and during some of feminism’s many pop culture moments this year. And the steady stream of #MeToo news stories have kept the word active in search over the past few weeks and months.

It’s not surprising, really. Think of it as one of the outcomes of the current moral crisis in the US and around the world — along with a growing awareness of the scope of the global epidemic of sexual harassment and acts of violence against women, the continuing challenges of underrepresentation in all decision-making positions and the misrepresentation of women and girls in media. I believe this moment presents an opportunity to enlist more women and men to step forward as feminists, to join the drive toward a world in which women feel safe at work and home and enjoy freedom to pursue their dreams and their potential for themselves, their families, communities and countries.

Still, I hear every day the question: “What does feminism actually mean?” According to Merriam-Webster, it’s “the theory of the political, economic, and social equality of the sexes” and “organized activity on behalf of women’s rights and interests.”

That’s a good elevator pitch, but it could use more perspective, more context. Over my seven years as curator and host of the TEDWomen conference, we’ve seen more than a few TED Talks take up the subject of feminism from many angles. Here are a dozen, chosen from the more than 150 TEDWomen talks published on TED.com and the TED Archive YouTube channels so far — including a bonus talk from the TEDx archive that kicked off a global conversation.

Looking ahead to 2018, I hope these talks can inform how we channel the new awareness and activism of 2017 into strategic decisions for women’s rights. Could we eliminate the gender gap in leadership? Could we eliminate economic, racial, cultural and gender inequities? Imagine these as goals for a newly energized and focused global feminist community.

What does it mean to be a millennial and a feminist in the 21st century? In her first TEDWomen talk, Courtney Martin admits that when she was younger, she didn’t claim the feminist label because it reminded her too much of her hippie mom and outdated notions of what it means to be a feminist. But in college, she changed her mind. Her feminism, she says, looks and sounds different from her mom’s version, but it’s not all that different underneath: feminist activism is on a continuum. While her mother talks about the patriarchy, Courtney talks about intersectionality and the ways that many other issues, such as racism and immigration, are part of the feminist equation. Blogging at Feministing.com, she says, is the 21st-century version of consciousness-raising.

2. Hanna Rosin: New data on the rise of women

Back in 2010 when we held the very first TEDWomen event in Washington, DC, one of our presenters was journalist Hanna Rosin. At the time, she was working on a book that came out in 2012 titled The End of Men. Her talk focused on a particular aspect of her research: how women were outpacing men in important aspects of American life, without even really trying. For instance, she found that for every two men who get a college degree, three women will do the same. Women, for the first time that year, became the majority of the American workforce. “The 200,000-year period in which men have been top dog,” she said, “is truly coming to an end, believe it or not.”

3. Kimberlé Crenshaw: The urgency of intersectionality

Now more than ever, it’s important to look boldly at the reality of race and gender bias — and understand how the two can combine to create even more harm. Kimberlé Crenshaw uses the term “intersectionality” to describe this phenomenon; as she says, if you’re standing in the path of multiple forms of exclusion, you’re likely to get hit by both. In this moving and informative talk, she calls on us to bear witness to the reality of intersectionality and speak up for everyone dealing with prejudice.

4. Sheryl Sandberg: Why we have too few women leaders

At the first TEDWomen in 2010, Facebook COO Sheryl Sandberg looked at why a smaller percentage of women than men reach the top of their professions — and offered three powerful pieces of advice to women aiming for the C-suite. Her talk was the genesis of a book you may have heard of: Lean In came out in 2013. In December of that year, we invited Sheryl to come back and talk about the revolution she sparked with Lean In. Onstage, Sheryl admitted to me that she was terrified to step onto the TED stage in 2010 — because she was going to talk, for the first time, about the lonely experience of being a woman in the top tiers of business. Millions of views (and a best-selling book) later, the Facebook COO talked about the reaction to her idea (watch video), and explored the ways that women still struggle with success.

Writer Roxane Gay says that calling herself a bad feminist started out as an inside joke and became “sort of a thing.” In her 2015 TEDWomen talk, she chronicles her own journey to becoming a feminist and cautions that we need to take into account all the differences — “different bodies, gender expressions, faiths, sexualities, class backgrounds, abilities, and so much more” — that affect us, at the same time we account for what we, as women, have in common. Sometimes she isn’t a perfect feminist — but as she puts it: “I would rather be a bad feminist than no feminist at all.”

6. Alaa Murabit: What my religion really says about women

Alaa Murabit champions women’s participation in peace processes and conflict mediation. As a young Muslim woman, she is proud of her faith. But when she was a teenager, she realized that her religion (like most others) was dominated by men, who controlled the messaging and the policies created in their likeness. “Until we can change the system entirely,” she says, “we can’t realistically expect to have full economic and political participation of women.” She talks about the work she did in Libya to change religious messaging and to provide an alternative narrative which promoted the rights of women there.

7. Madeleine Albright: Being a woman and a diplomat

Former US Secretary of State Madeleine Albright talks bluntly about being a powerful women in politics and the great advantage she feels in being a woman diplomat — because, as she puts it, “women are a lot better at personal relationships.” She talks about why, as a feminist, she believes that “societies are better off when women are politically and economically empowered.” She says she really dedicated herself to that, both at the UN and then as secretary of state. Far from being a soft issue, she says, women’s issues are often the very hardest ones, dealing directly with life and death.

8. Halla Tómasdóttir: It’s time for women to run for office

In early 2016, Halla Tómasdóttir ran for president in Iceland and — surprising her entire nation (and herself) — she nearly won. Tómasdóttir believes that if you’re going to change things, you have to do it from the inside. Earlier in her career, she infused the world of finance with “feminine values,” which she says helped her survive the financial meltdown in Iceland. In her 2016 TEDWomen talk, she talks about her campaign and how she overcame media bias, changed the tone of the political debate and inspired the next generation of future women leaders along the way. “What we see, we can be,” she says. “It matters that women run.”

Women’s equality won’t just happen, says British comedian and activist Sandi Toksvig, not unless more women are put in positions of power. In a very funny, very smart TEDWomen talk (she is the host of QI after all), Toksvig tells the story of how she helped start a new political party in Britain, the Women’s Equality Party, with the express purpose of putting equality on the ballot. Now she hopes people — and especially women — around the world (US women, are you listening?) will copy her party’s model and mobilize for equality.

Poet, playwright, filmmaker and educator Chinaka Hodge uses her own life and experiences as the backbone of wildly creative, powerful works. In this incredible poem delivered before the 2016 election — that is perhaps even more stirring today given everything that has passed in 2017 — she asks the tough questions about a year that none of us will forget.

11. Gretchen Carlson on being fierce

In this #MeToo moment, Gretchen Carlson, the author of Be Fierce, talks about what needs to happen next. “Breaking news,” she says, “the untold story about women and sexual harassment in the workplace is that women just want a safe, welcoming and harass-free environment. That’s it.”  Ninety-eight percent of United States corporations already have sexual harassment training policies. But clearly, that’s not working. We need to turn bystanders into allies, outlaw arbitration clauses, and create spaces where women feel empowered and confident to speak up when they are not respected.

Bonus: Chimamanda Ngozi Adichie: We should all be feminists

This TEDx talk started a worldwide conversation about feminism. In 2012 at TEDxEuston, writer Chimamanda Ngozi Adichie explains why everyone — men and women — should be feminists. She talks about how men and women go through life with different experiences that are gendered — and because of that, they often have trouble understanding how the other can’t see what seems so self-evident. It’s a point even more relevant in the wake of this year’s #MeToo movement. “That many men do not actively think about gender or notice gender is part of the problem of gender,” Nigozi Adichie says. “Gender matters. Men and women experience the world differently. Gender colors the way we experience the world. But we can change that.”

As I mentioned, these are just a handful of the amazing, inspiring, thoughtful and smart women and the many ideas worth spreading, especially in these times when hope and innovative ideas are so necessary.

Happy 2018. Let’s make it a good one for women and for all us who proudly call ourselves feminists and stand ready to put ideas into actions.