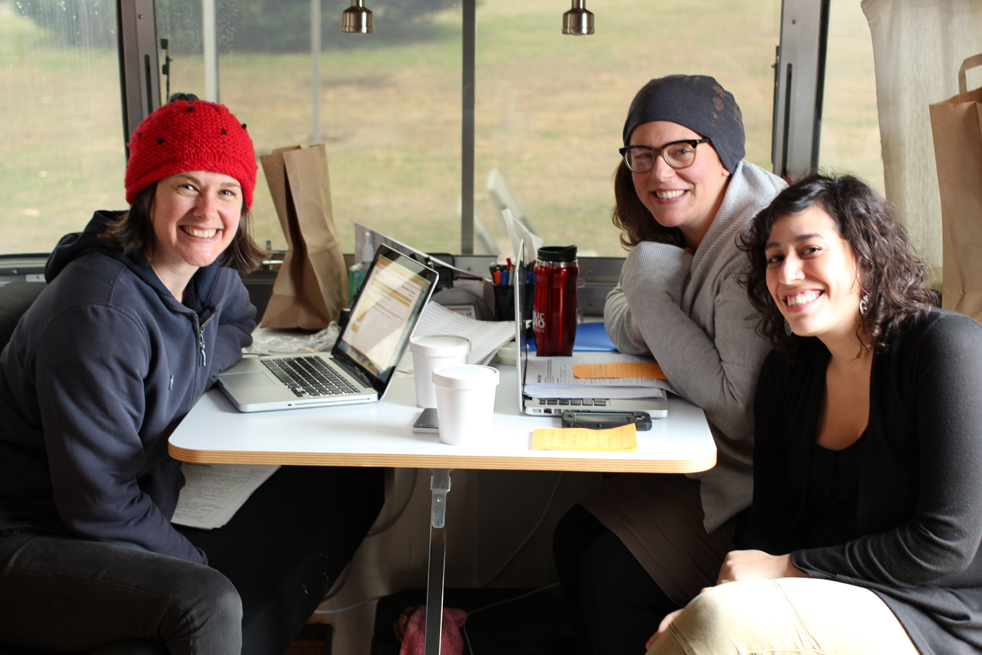 In teams of three, the StoryCorps Mobile Tour travels across the United States, facilitating interviews between ordinary people with extraordinary stories. Emily Janssen (center) shares a moment in her team’s Airstream trailer, known as Betty. Photo: Courtesy of Emily Janssen

Ever had the impulse to put everything in storage, sublet your place and travel across the country in an Airstream trailer?

That’s what Emily Janssen did when she joined the StoryCorps Mobile Tour as a facilitator, someone who helps people record their own StoryCorps interview.

She’d worked for StoryCorps before, at their headquarters in Brooklyn, but in 2014 she decided it was time to hit the road. Now she crisscrosses the country with a mobile recording booth and a team of three, parking in one spot for four or five weeks and recording interviews with people who live there.

The team records seven interviews a day, five days a week. Janssen oversees the technical aspects of recording, logs each interview for the Library of Congress — and actively listens to every conversation as it unfolds, asking clarifying questions to keep people on track. So far, she has captured nearly 500 interviews.

Janssen will travel with the mobile team through the end of 2015. She spoke to us from Vernal, Utah, about the mobile recording booth in a trailer (which is named Betty), life on the road and how listening has transformed her.

What inspired you to become a facilitator?

I was working as an advocate for homeless youth, and witnessing their voicelessness. I was also devouring audio documentaries. At the time, StoryCorps was a project of Sound Portraits. I clicked on the little icon on their website, read the mission statement and just immediately connected with the idea. I saw the potential for StoryCorps to be an empowering space for those who are marginalized to speak in their own words.

What do you remember from your first day?

I didn’t come from a radio background, so I just remember thinking, “I hope this is recording. It says it’s recording. Is the sound O.K.? Did I remember to tell the participants what will happen when they finish recording?”

How do you stay neutral in interviews?

I can’t say that I do 100% of the time. Witnessing people being open and honest, expressing their love and appreciation for each other, can be emotional. We keep tissues in our booth — and facilitators use them, too. When I’m hearing a particularly difficult or sad story, I remind myself that my role is not to be a therapist or to try to change the emotions my participants are expressing. My role is to listen and hold a safe space for them.

StoryCorps has two Airstream trailers that house mobile recording studios. With the 2015 TED Prize, StoryCorps launched an app that for the first time lets people conduct interviews outside of an official booth. Photo: Courtesy of StoryCorps

How do you manage the logistics of being on the road all the time?

When people ask, I say, “I live with the booth.” I don’t have a permanent residence, but my home bases are Brooklyn, where StoryCorps is based; Minneapolis-Saint Paul, where I lived before coming on the road; and Albany, where I grew up. I don’t have a lot of possessions, but what I do have is stored by friends and family. My dog, Pedro, has had his own adventure with my aunts during my time on the road.

Is it hard to go home?

I appreciate times at home now more than ever. I love hearing the sounds of someone brewing coffee or cooking dinner — or just the familiarity of sitting on the couch with someone I’ve known for years. Being on the road has made me crave the stability and deep ties you create by being in one place, while also sparking my curiosity to discover more.

Life on the road is about constant transition. Betty, our trailer, becomes the most stable thing. After getting lost looking for the grocery store, it’s nice to come home to the booth.

Where do you live while on the road?

It changes every stop. Our local public radio station partners provide housing for our team. We’ve been in houses, apartments, dorms, hotels. We’re never in one place for more than five weeks.

When the tour began, the staff pulled the trailer with a Chevy Silverado. But now, we hire professional drivers. Let’s just say that’s a good thing.

What are the essential things to have with you on the road?

My phone and my sneakers. My phone acts as my connection to our office and to my family and friends. And I’d be lost without my sneakers. Mine have run around Forest Park in St. Louis, seen alligators in Louisiana’s Barataria Preserve, climbed the Manitou Incline in Colorado, and walked countless city blocks.

You often listen to difficult stories. How do you prevent burnout?

It’s important to practice self-care. On the road, I make time to run and swim, and send surprise packages to my niece and nephew. I weave and quilt to create something outside of my head. But the best tool is the team. We’re always on the road in a team of three, and we check in with each other about our day and interviews. We create our own little community that helps you process everything.

What advice would you give on becoming a better listener?

If you have the impulse to interrupt and ask a question, it’s good to ask yourself, “Why do I want to ask that?” Sometimes the person will answer in their own time, and in their own way. It’s good to pause and make sure you’re not leading the conversation.

How has this experience changed you?

Being in the booth constantly reminds me that we are not a list of our accomplishments. When you’re listening to people talk about their lives, you may only peripherally know what’s on their resume, but you can see who they are. We all have our struggles and our celebrations, but most of us are just trying to do our best to move through life. I witness a tremendous capacity for love and forgiveness, and am amazed at people’s resilience. 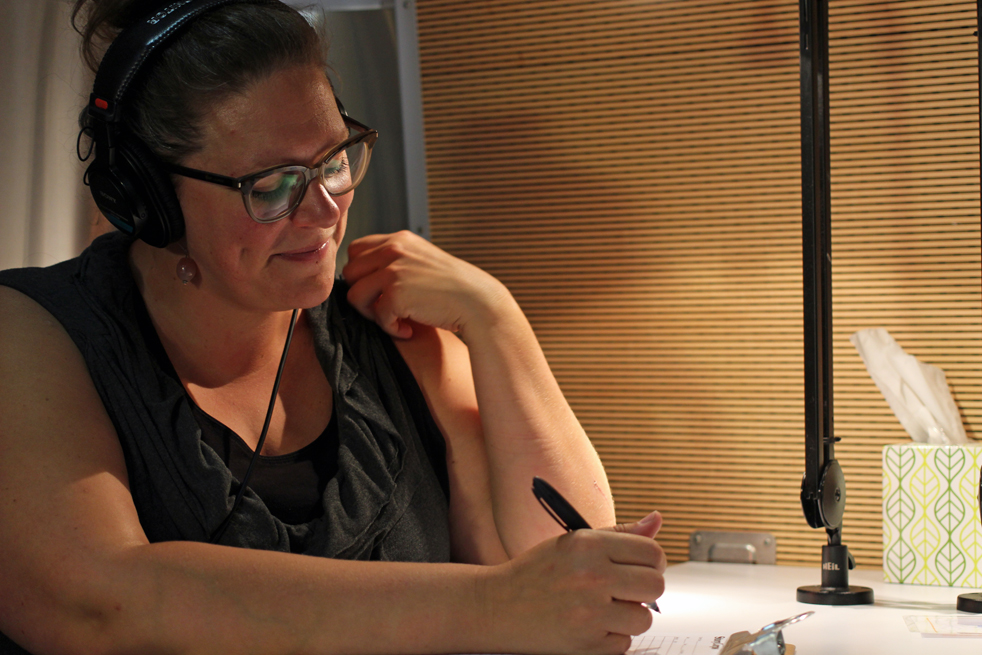 Find out where the StoryCorps booth will be next »

Dave Isay, the founder of StoryCorps, is the winner of our 2015 TED Prize. In a talk at TED2015, he shared an audacious wish for his organization: to take it global with a free app. Stay tuned for this column every other week on the TED Blog, as we chart the evolution of his TED Prize wish.