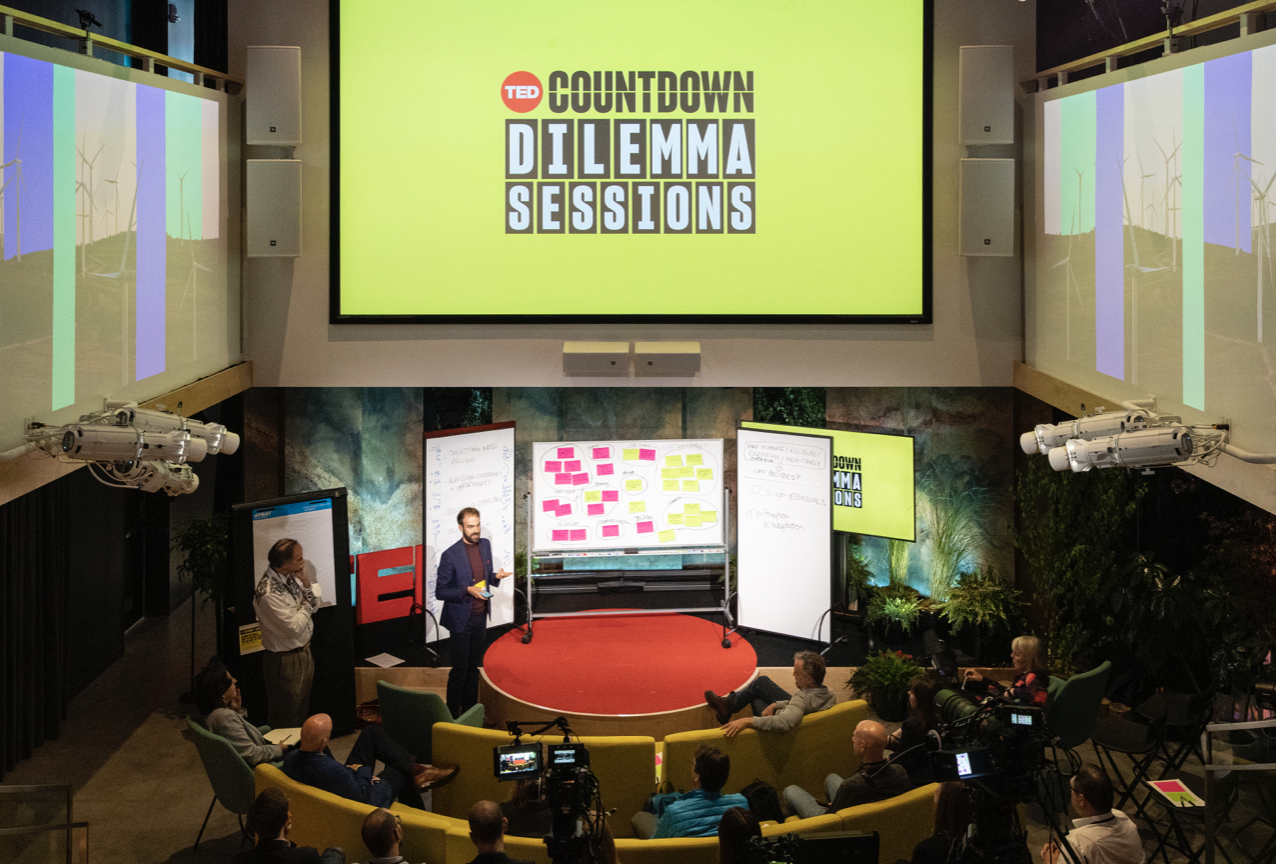 In June 2022, TED’s climate initiative, Countdown, convened in New York for its first Dilemma Series event, titled “Is there a role for carbon credits in accelerating a fair, net-zero world?”

Carbon credits are a very controversial topic, one that elicits decidedly contrasting reactions. One hundred people gathered over 36 hours of deep conversations and hands-on workshops to confront those positions and bridge divides in a constructive manner.

The Countdown team is now preparing to stage its second Dilemma Series gathering, in London this October, around the even thornier question: “What is the role of fossil fuels between now and 2050?” We asked Lindsay Levin and Bruno Giussani, two of the cofounders of TED Countdown, why they and their team decided to create this new discussion format.

What is the Dilemma Series?

It’s a string of carefully curated events designed to look at some of the “knots” in the climate change space, where diverging positions have solidified into an inability to dialogue and seek how to undo them. Climate change is the most pressing issue facing our planet. It is also prismatically complex, and exploring ways to unlock stalled progress is vital to ensuring a safe and just future for all.

Most of us intuitively think of problems in terms of “choices”: situations where we weigh alternatives and decide the way forward. But as our colleague Bill Sharpe would say, complex situations often need both-and thinking instead of either-or thinking. They require us to hold competing values together rather than make straightforward choices. That’s what a dilemma is about.

Give us an example.

Think of a company. There is an inherent tension, and sometimes a direct opposition, between short-term profits and long-term investments. But both are necessary.

Or consider energy. The same kind of tension exists between the foremost necessity to extricate ourselves from fossil fuels and decarbonize the economy – without which our future will be endangered – and the equally paramount necessity of a stable and secure supply of energy, without which our present will be endangered. This is the nature of a dilemma: if one idea prevails to the exclusion of the other, we will not succeed. As said, we can’t confront these issues as straightforward either-or choices.

What is the format of the Dilemma discussions?

When we are talking about highly charged topics like fossil fuels or carbon credits, positions can become as extreme and inflexible as “what you say is BS.” These may be, in some cases, legitimate positions, but it’s difficult to see how they can be conducive to progress. Thus, the key elements of the design of a Countdown Dilemma discussion are a broad and carefully balanced representation among participants, their willingness to engage in deep listening and collaboration, and a shared agenda of finding bridges so that we can make progress despite the differences.

Sessions last 36 hours and feature some TED Talk-like moments and on-stage conversations that set the scene and offer a 360-degree view of the topic. This may include speakers with polar opposite positions. Most of the work, though, happens in small-group, participant-led workshops and brainstorms designed to explore the problem and potential solutions. Significant time is also given to “white space” moments, where people give feedback, offer a counterargument, contribute new information or data, or share feelings and emotions.

The Dilemma Series events are invitation-only, and although they are filmed, they aren’t publicly livestreamed in order to create a safe space for everyone to be able to share deeply. Those who participated in the first gathering in New York by and large told us that they found this approach transformative and an antidote to the polarization of the current climate discussions.

Who is invited to the Dilemma discussions and why?

We seek to bring together people from all sectors who have relevant knowledge, expertise and backgrounds, from business and civil society to technology and climate justice. Participants include scientists, CEOs, activists, experts, politicians, artists, frontline communities, investors and more, and come from a variety of geographies and age groups. Given that our goal is to turn differences into productive ways of working together, we can’t succeed unless we bring about an elevated awareness of different perspectives.

Why are representatives from fossil fuel companies included and being given a platform?

We reject the binary logic of “giving a platform/deplatforming.” Inviting someone to a conversation where hard questions are asked is not akin to giving them an open microphone. Extending an invitation to representatives of fossil fuel companies or banks that invest in energy does not represent an endorsement of them or their activities.

However, we live in a world where our energy system is still more than 80 percent dependent on fossil fuels. We need to rapidly transition away from that, and it’s going to be very difficult because it means we must confront the dilemma we described earlier. Imagining that we can make real progress and generate system-wide solutions by talking in separate, exclusionary circles creates echo chambers and is unlikely to generate forward movement. We recognize that some may not feel comfortable with this, but we believe in systems change and in a big-tent approach, where every organization, company, city, group, community and individual has a voice and a role to play.

What informed the creation of the Dilemma Series?

It was inspired by the learnings from a very tense moment that happened during the TED Countdown Summit in October 2021 in Edinburgh. We hosted a discussion featuring an investor, the CEO of a major oil company and a climate activist, moderated by a globally recognized climate diplomat – and it didn’t go as we had imagined. It made very visible, and painful, the tremendous tensions that traverse – and cripple – the climate transition, the anxiety felt by young generations, the continued business-first approach of the fossil fuel industry and how we have run into an incapacity to discuss and take action in the common interest.

We founded TED Countdown almost four years ago intentionally as a space to hold difficult and candid conversations and to catalyze the solutions necessary to build a zero-carbon world — one that is safer, cleaner and fairer for everyone. That hour in Edinburgh and its ripple effects taught us that it was even more urgent to create spaces where these conversations can take place constructively.

Dilemma sessions are, by necessity, invitation-only and not open to the public. There are two inherent practical limitations to their organization, which we strive to be thoughtful about. One is typical to all events: there are a limited number of seats. Because of the dynamics of the gathering, which is very hands-on and participative, the ideal number is between 100 and 150. The second is representation: we make every effort to create a balanced group representing a broad set of viewpoints and diversity of tactics. We also ask all attendees to commit to participate in the whole event.

What type of vetting/fact-checking process do these sessions go through?

We apply to the Dilemma Series – from preparation to post-production – the same rigorous processes we apply to TED Talks published on TED.com, including fact-checking.

The first Dilemma discussion took place in June in New York. What was it about and how did it go?

It focused on the question, “Is there a role for carbon credits in accelerating a fair, net-zero world?” The whole space of carbon credits/offsets/removals/markets is both very contentious and very confusing. Markets lack clear and shared principles and criteria, and they lack transparency. Offsets and credits have, by and large, a substandard reputation, and often deservedly so. Removals is a word that encompasses a range of things but is mostly used interchangeably. Opinions diverge wildly, including around the concept of “net zero,” which some find useful and others dangerous. So during the New York session we put all that on the table.

We believe that when credible people disagree on something, the way out is not to dismiss one side over another but to hold and value different points of view in the same space and see what can be generated together. And despite moments of discomfort and strong disagreement, the participants embraced the process.

What will the public get to see from these discussions?

The main aim of the Dilemma Series is to show the feasibility of a different approach to climate solutions and the different paths for creating change. We count on participants to return to their organizations, communities and spheres of influence with a renewed sense of the possibilities, and to become facilitators of dialogue on problems where dialogue has become uncomfortable.

Of course we also want to bring these discussions to a broader audience in order to increase mutual and nuanced understanding and introduce ways of navigating dilemmas. We are planning to release online both the full video recordings of the main sessions, as well as a mini-documentary retracing and summarizing the whole day. One of us, together with carbon removal expert Gabrielle Walker, also turned some of the thinking into an essay published shortly after the New York event.

How does the Dilemma Series fit into the overall TED Countdown initiative?

Countdown is a collaboration between TED and Leaders’ Quest to identify and accelerate solutions to the climate crisis. We started in 2019, with a global livestreamed launch in 2020. The most visible part of our work has been about making essential ideas more visible. To date, we’ve created over 120 TED talks (seen by millions), hosted conferences and digital events and supported more than 1,000 local TEDxCountdown events in 99 countries. However, we also devote time and resources to championing climate leadership in every field. We do that by helping climate organizations attract hundreds of millions of dollars in funding to accelerate their trajectories, organizing retreats, and by exploring ways to turn the differences that stall progress into productive ways of working together, as embodied in the Dilemma Series. We don’t do this alone: we are accompanied on this journey by many engaged partner organizations and individuals who share similar aims.

You mentioned the Countdown Summit in Edinburgh in 2021. Part of that event was met with street and social media protests because of the presence of fossil fuel representatives. Aren’t you concerned about attracting more protest by choosing this theme for your London event?

Protests, social media organizing and engaged climate activism are necessary components of change. They express and organize demands that can’t be conveyed through dysfunctional political and institutional channels and create social pressure on decision-makers. We support and work closely with many activists and remain in constant dialogue with them. We see the work we are doing with Countdown and the Dilemma Series – an effort to find room for progress and open up pathways even when there are substantial differences – as complementary to engaged activism. We are fighting the same fight and we all want to contribute to creating a decarbonized, fairer world.

Is the Dilemma Series funded by corporate money?

No. TED Countdown and its activities are philanthropically funded, and we have deliberately avoided corporate sponsorships.