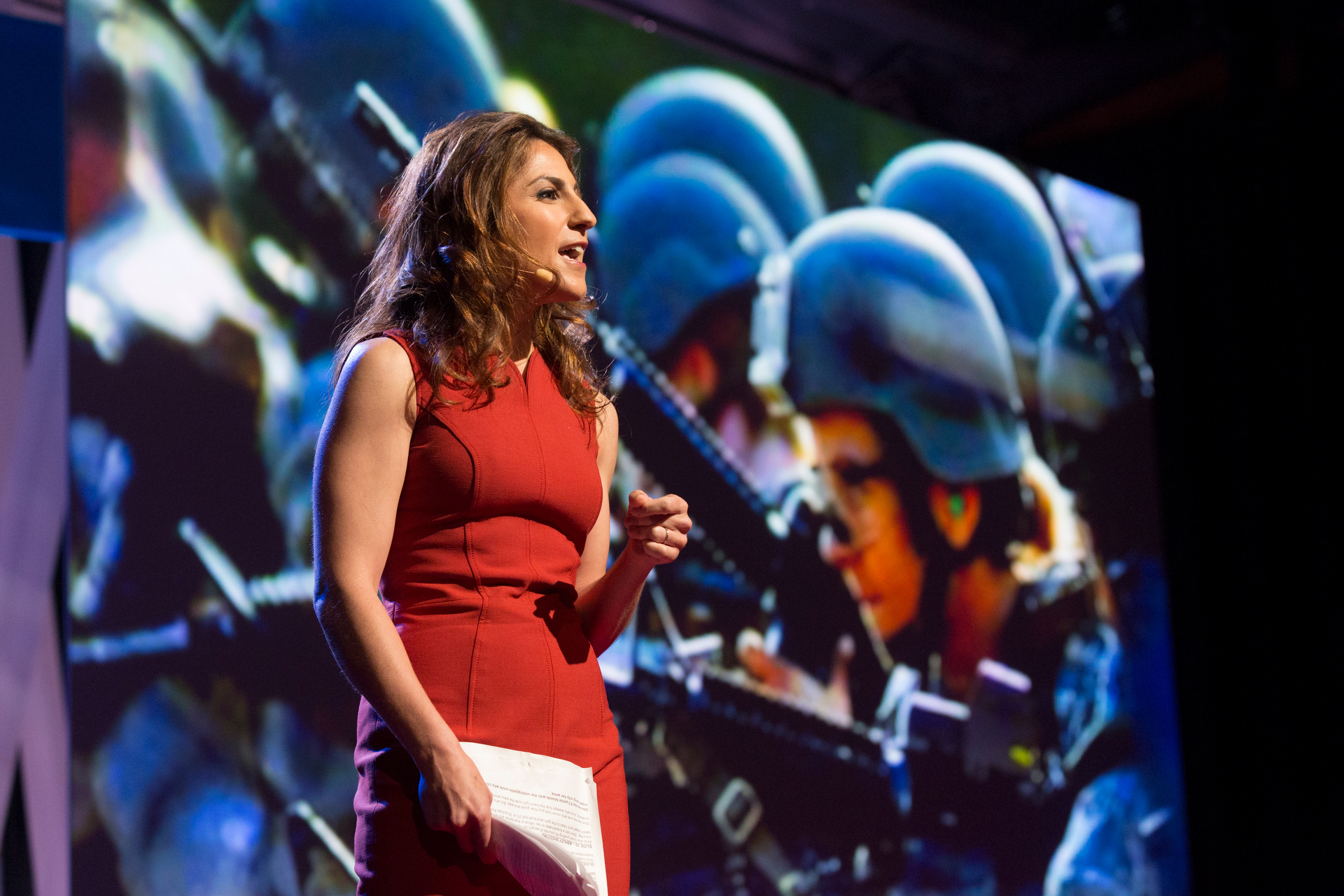 Gayle Tzemach Lemmon wants to highlight the women who do ground combat in the US Army. Their role is a vital one: building peace by engaging citizens in war zones. Photo: Marla Aufmuth/TED

What is an idea, really, if you keep it to yourself? No, ideas are meant to be shared. In this session, stories of connection — from Jane Fonda and Lily Tomlin, who have been friends since 9 to 5, to Jenni Chang and Lisa Dazols, a couple who traveled around the world documenting the lives of “supergays.”

Digital meets acoustic, in three parts. Kaki King fuses the ancient tradition of working with one’s hands with digital technology, projection-mapping imagery onto her guitar as she plays. Using her guitar’s neck like a keyboard, she plays an intricate melody as she takes the audience on a musical journey in three parts. First, an average day in New York City, with video projections of bodegas, city blocks, snowy stoops and taxi cabs. Next, her guitar takes on a bionic feel, the tempo of her playing reflecting the colorful projected spirals. Finally, in a mood shift, the lights dim and her guitar lights up bright blue — first sporadically around the ridges, and then all over in synchronized bursts. She calls it “guitar as paintbrush.”

A tribute to friendship and vitality. Next, host Pat Mitchell sits down with legendary duo Jane Fonda and Lily Tomlin, appearing together for the first time since 9 to 5, on the set of which they became fast friends. In a raw, tender and extremely funny conversation, the three discuss longevity, the value of true friendship, and ultimately, the question of what it means to live well. “I’d trade the years for joy,” says Tomlin. They touch on Fonda and Tomlin’s new show, Grace and Frankie, why we should get off fossil fuels, and the real differences between women’s and men’s friendships. Read a full recap of this interview »

Yes, women go to war. Gayle Tzemach Lemmon is here to talk about women in combat in the US Army. For a long time, US women soldiers were banned from ground combat, but slowly the powers-that-be in the US Army realized that they would, as Lemmon puts it, “never kill its way to the end of its wars.” Instead, they needed to build peace by engaging with citizens — 50 percent of whom, of course, are women. And in places like Afghanistan, that engagement had to be done by women, too. Lemmon tells the story of the remarkable group of women who in 2011 signed up to engage in the kind of combat seen by fewer than 5 percent of the US military. “For them, it was not about politics, it was about serving with purpose,” she says, introducing us to some of these extraordinary characters and citing a quote from the longtime Army Ranger who trained them — “these may be our own Tuskegee Airmen.” Lemmon closes her passionate talk with the story of Ashley White, a “wild mix of Martha Stewart and GI Jane.” White was killed in action in October 2011. At her funeral, the head of the Army’s Special Operations team gave public testimony to the soldier’s courage. “Make no mistake,” he said. “These women are warriors.” Read an extract from Gayle Tzemach Lemmon’s book, Ashley’s War »

Women’s rights and religion are not mutually exclusive. Alaa Murabit’s job title is unusual: she is a peace builder. “Because of my work, I recognize that the only way to ensure the full participation of women, globally, is by reclaiming religion,” she says. Murabit grew up in Canada, and while she was introduced to the Muslim faith, she wasn’t introduced to Muslim culture until her family moved to Libya when she was 15. She found herself questioning the role of women in her faith. “Why, if we are equal in the eyes of god, are we not equal in the eyes of men?” she asked. “The person who gets to control the message is the person sitting at the table. In every world faith, those are not women.” After the Libyan revolution broke out, Murabit launched a campaign to show what scripture had to say about gender equality. It began to change minds; soon, the UN launched a similar campaign. “I remain a very strong believer that women’s rights and religion are not mutually exclusive,” she says. 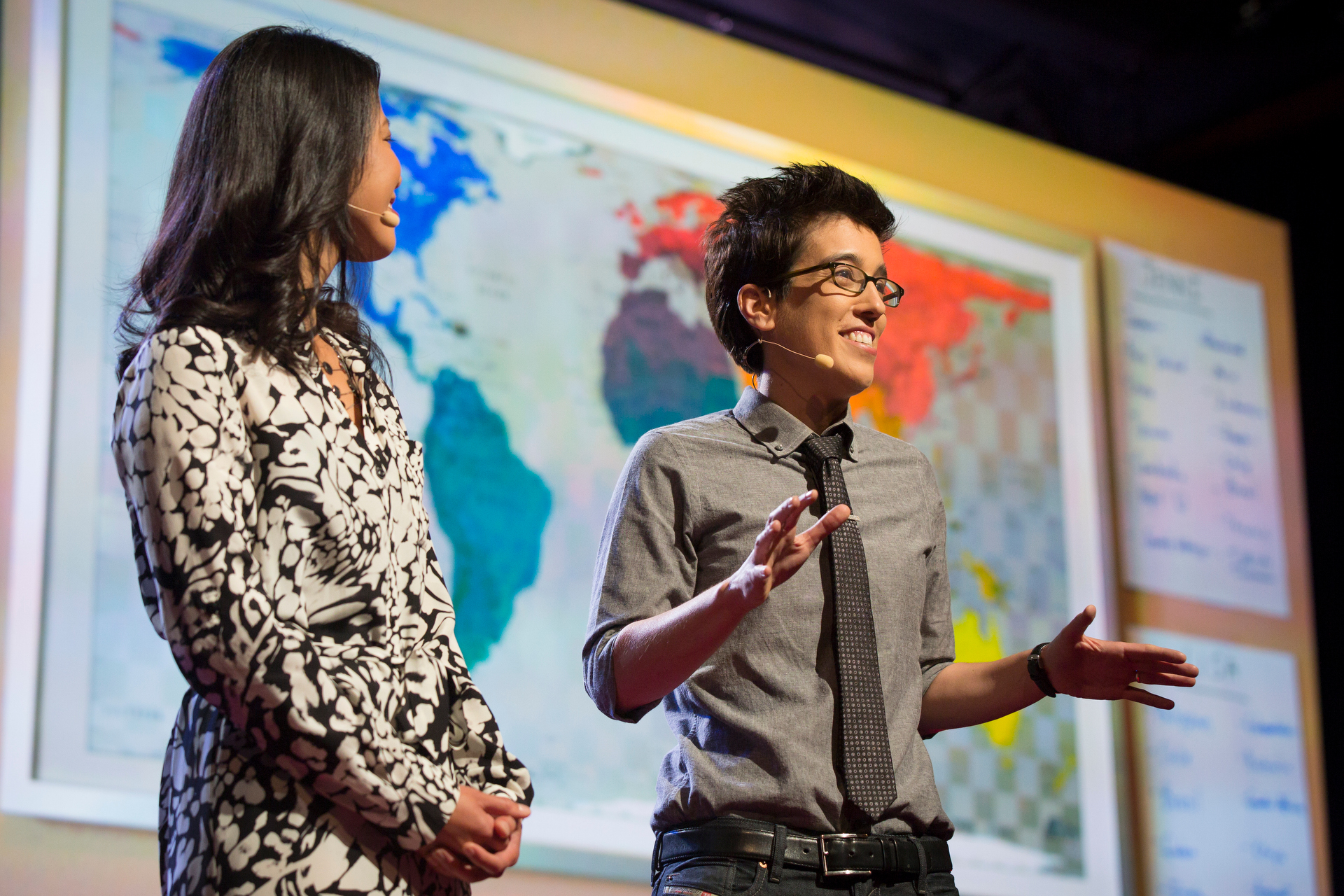 Couple Jenni Chang and Lisa Dazols made a documentary called Out and Around. For it, they traveled the world talking to “supergays” who are proud to be who they are, no matter how marginalized they are in their culture. Photo: Marla Aufmuth/TED

A supergay trip around the world. As a gay couple in San Francisco, Jenni Chang and Lisa Dazols had a relatively easy time living the way they wanted. But each had her own reasons for having a deep fascination with life outside the bubble of the Bay Area. When Chang first came out to her parents, they lamented that they should never have left Taiwan — to them, living an openly gay life was a thoroughly Western concept. For Dazols, a social worker for HIV-positive immigrant clients, stories of persecution and homophobia in their home countries were common. The two decided to set off on a world tour in search of “supergays,” LGBT people who were doing something extraordinary in the world. Though they had no background in reporting or filmmaking, they wanted to tell the stories through film — so they bought a camcorder and a book on making documentaries and gave it a shot. Chang and Dazols visited 15 countries across Africa, Asia and South America — from India, recently home to the world’s first openly gay prince, to Argentina, the first country in Latin America to grant marriage equality. They even went to Taiwan, where a gay pride parade takes place just blocks from the home of Chang’s grandparents. Though their travels entailed many uncomfortable moments, they found so many of the inspiring stories — and the supergays — they had been looking for. Upon return, Chang and Dazols married under California’s newly passed marriage equality law, and have since been happy, though not surprised, to see a powerful momentum for change around the world.

Poetry and Parkinson’s. Robin Morgan is a feminist icon who’s been a hugely influential figure in the international women’s movement for the past 30 years. She was also, she tells us, diagnosed with Parkinson’s disease some five years ago. “You bring to a crisis the person you already are,” says Morgan, so as an activist she began working with the Parkinson’s Disease Foundation. As a poet, she began writing about the subject matter, too. “I do not feel diminished by Parkinson’s; I feel distilled by it,’ she says, “and I very much like the woman I am distilling into.” Morgan shares four recent poems, writing that is by turns “tragic, hilarious, sometimes even joyful.”

And then … “You know that high feeling you have after that last poem. I’m here to take a dump on that feeling,” says comedian Negin Farsad, opening up her sendup of the conference. At whiplash speed, she takes us on a tour of the past six sessions of the conference with punchlines galore. She points to Sakeena Yacoobi’s story of defusing the situation when Taliban members stormed her school for girls in Afghanistan. “That was a typical Tuesday for her,” says Farsad. “A typical Tuesday for me: I construct 4-7 very clever tweets. Me and Sakeena, we’re the same.” But she ends on a real note — with a photo of her mom. She says, “Remember that I love you, and never, ever forget to stuff your bag with the free snacks before they take them away.” 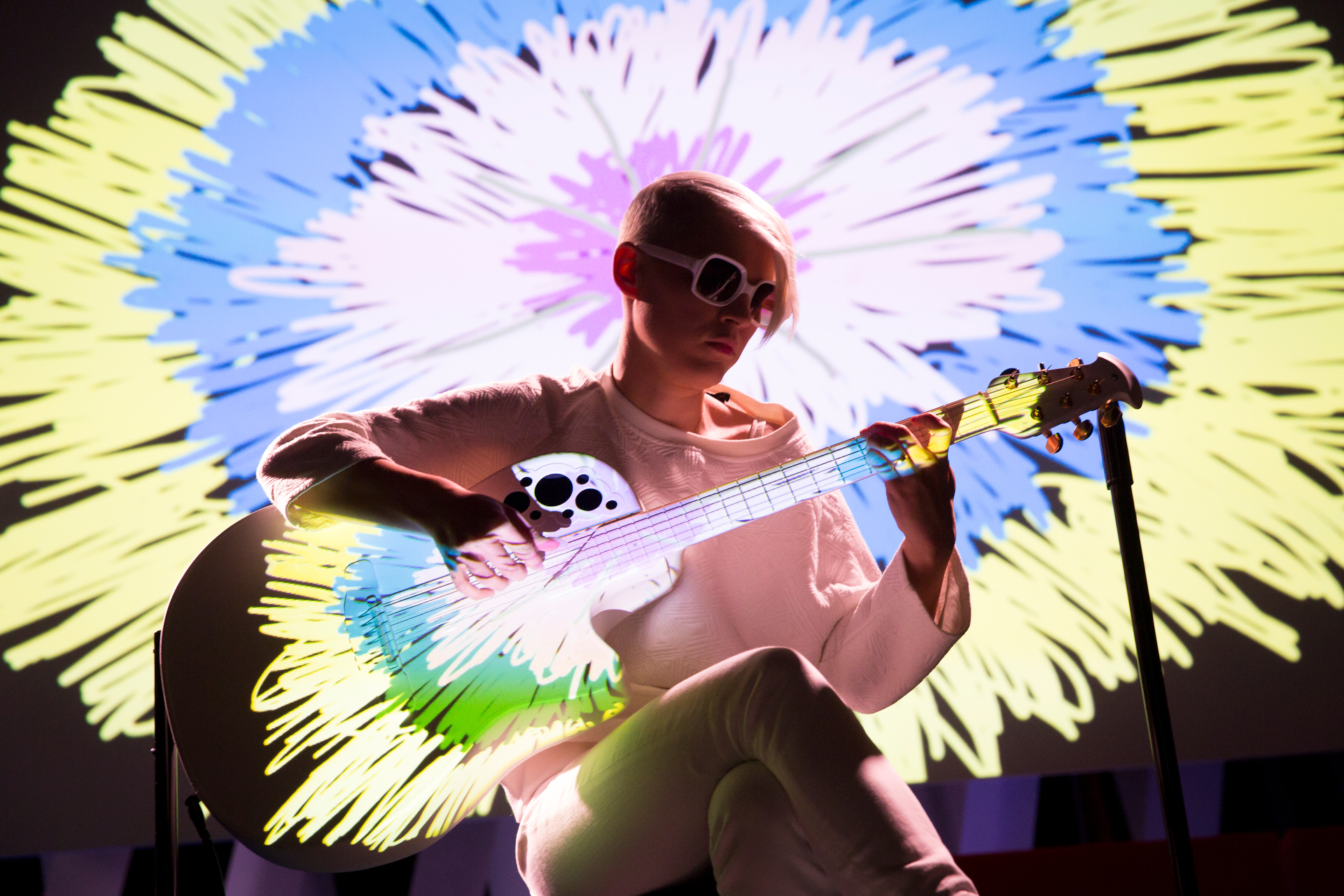