I’ve been lucky enough to be one of TED’s photographers since 2009; I’ve spent most of my time during hundreds of talks standing, crouching or sitting on the floor at the front of the stage, getting as close as I can to make the perfect photograph of a speaker in motion from exactly the right place.

One question I get asked all the time: Do I actually get to listen to the talks, or am I too busy trying to make an image to hear what is being said? Some photographers I know wear earplugs so they can focus. Me, I have to be fully engaged — listening carefully to every word — to find the moments I want to capture. There’s no other way.

Here are a few favorite moments from my time at the edge of the stage. 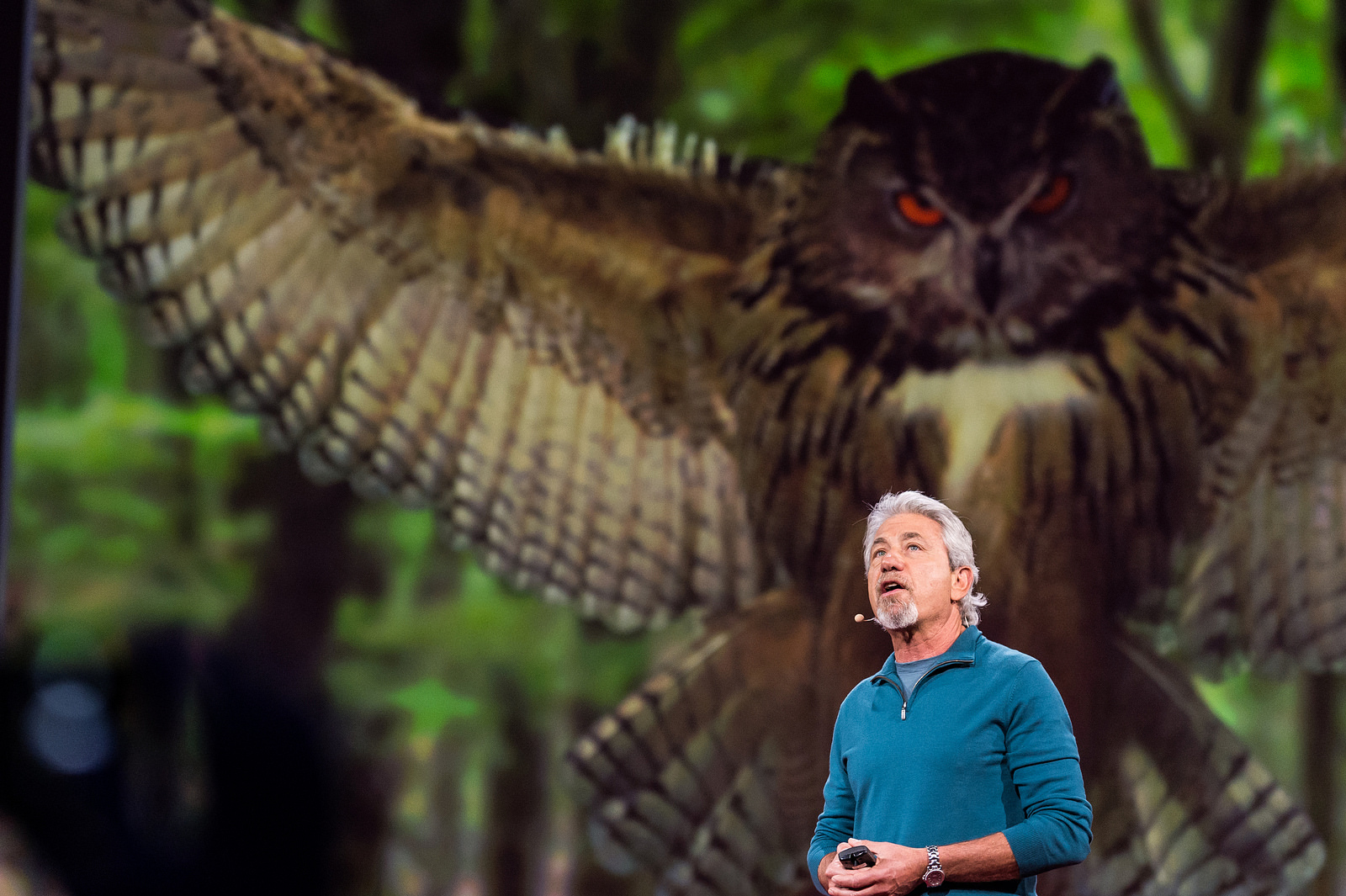 Photographing other photographers is always a thrill. I’m concerned with not only capturing them in the act of giving their talk, but doing so in a way that captures their visual material as well. Sometimes that’s easier said than done. But other times, like when Louie Schwartzberg spoke at TED2014 in Vancouver last year about his high-speed nature images, the shot just unfolds. Photo: James Duncan Davidson/TED 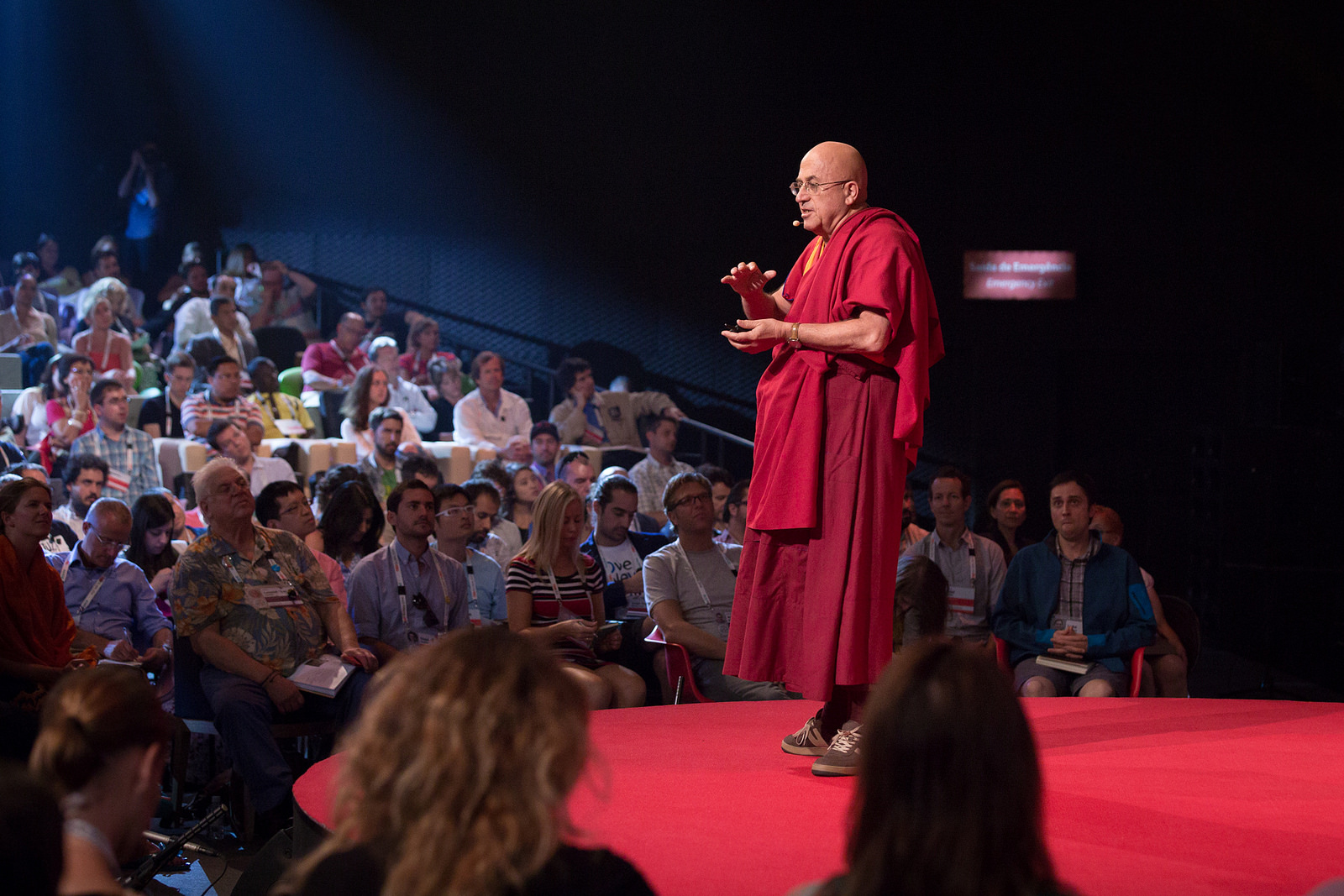 Matthieu Ricard might just be the happiest man I’ve ever met and had the good fortune to speak with. He’s also got a wit that you wouldn’t expect from a man in the robes — and a passion for photography to boot. We talked about cameras for a while at TEDGlobal 2014 in Rio de Janeiro before he went on stage. The lovely thing about the stage at that event was that it lent itself well to showing Matthieu and the audience together — not just him alone. Photo: James Duncan Davidson/TED 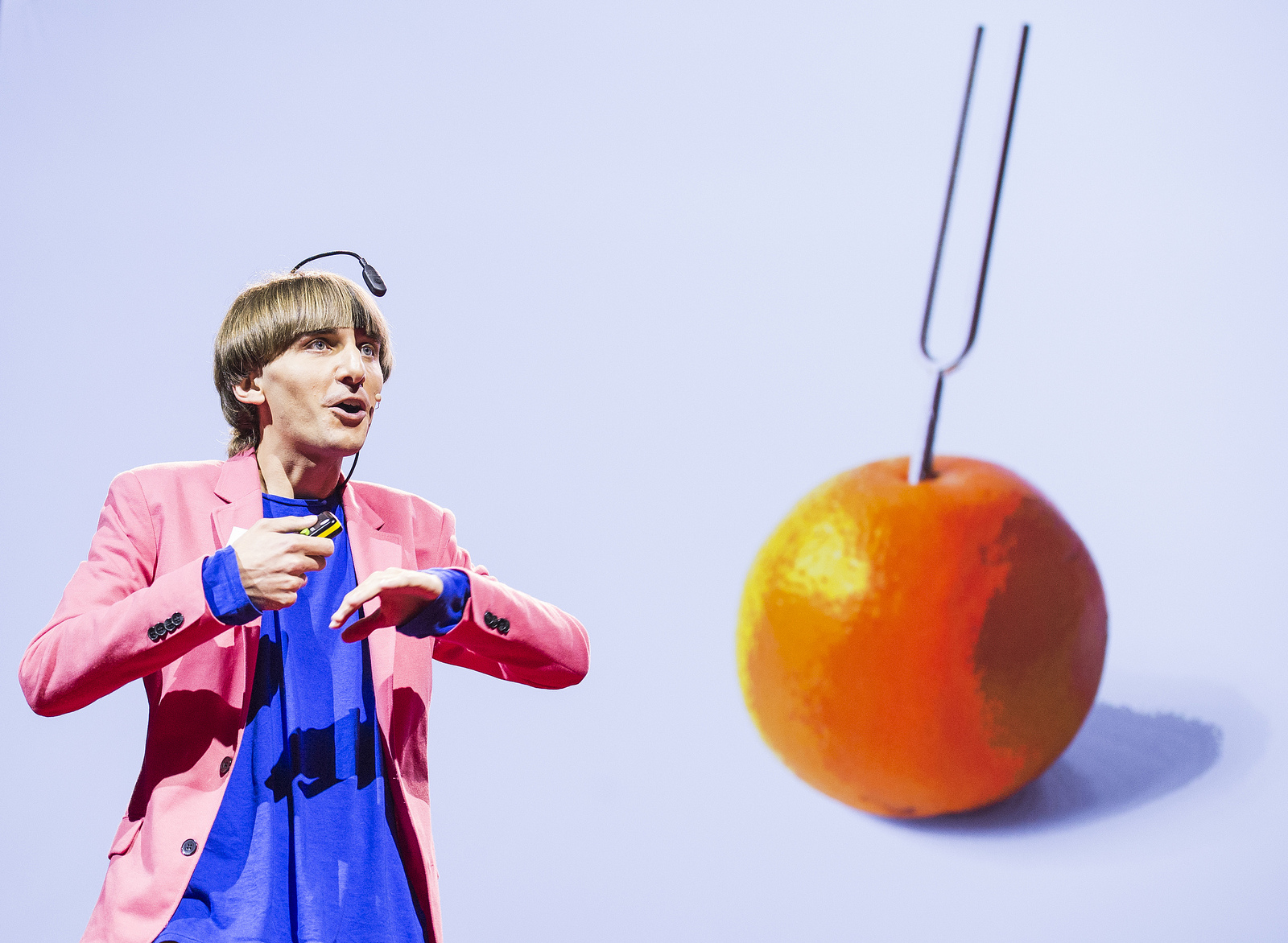 Neil Harbisson is colorblind and wears a device attached to his head that turns color into sounds he can hear. He hears in color, and prefers to wear brightly colored clothes that are complementary in his perception. I had already made the photos of him that I thought I wanted at TEDGlobal 2012, and then this slide came up and the visual pun was too good not to capture. Photo: James Duncan Davidson/TED 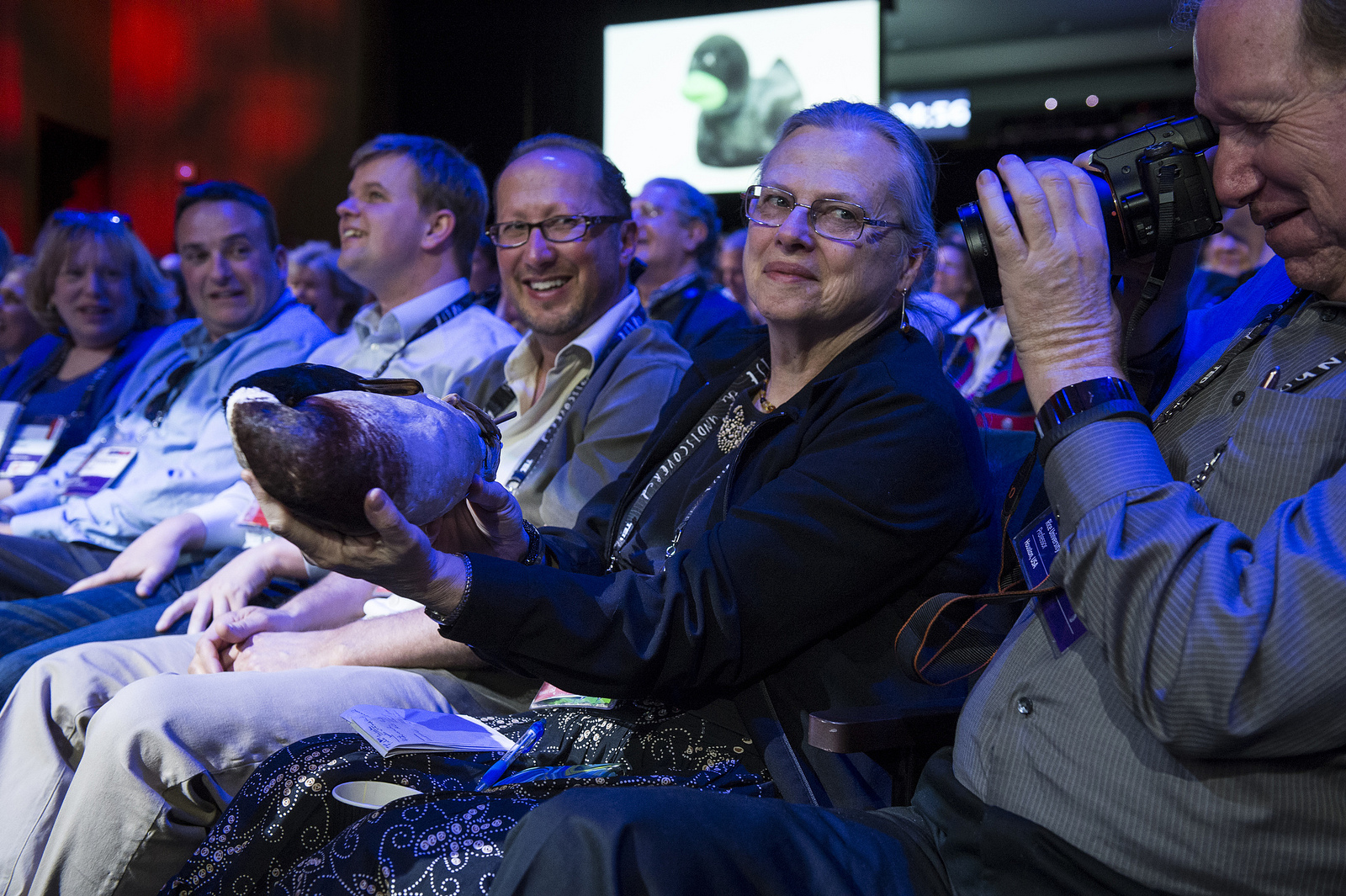 Kees Moeliker’s talk at TED2013 — about a duck that was sexually assaulted after its death — was shocking enough. But when he pulled out the preserved duck and handed it to the audience to examine for themselves? There was a reaction of intense intrigue and repulsion. It was a unique edge-of-stage experience and I’ll always remember the expressions I traded with the audience after the duck went back on stage. Photo: James Duncan Davidson/TED

2011 TED Prize Winner JR is an amazing photographer with an identity that he tries to keep at least somewhat undercover. I never photograph him without his sunglasses on, but I wanted to make a photo of him on the TED stage that captured the man in a different way than as a speaker. So I talked him into sitting in the D and posing for me in the red light. To me, this is JR at TED. Photo: James Duncan Davidson/TED 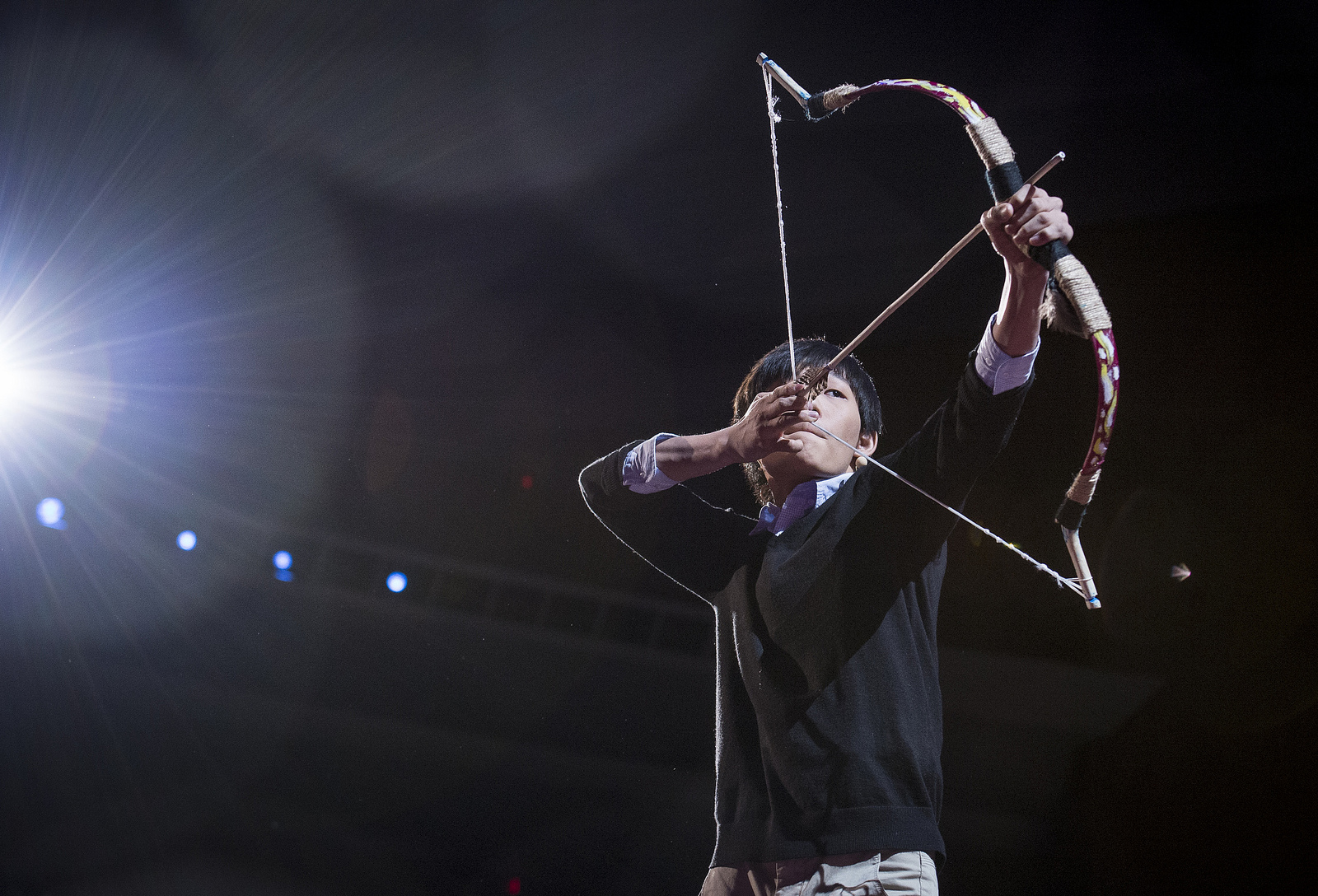 When Dong Woo Jang was giving his talk at TED2013, I knew I had less than a split second to capture the shot I wanted. So well before he demonstrated his bow, I found the angle I wanted, engaged my camera’s high-speed burst mode, and waited for him to casually pick up the bow, turn, aim at his target, and fire. It happened so fast that even at nine frames a second, there’s this frame, and then the next where the arrow is leaving the bow. Nothing more. Photo: James Duncan Davidson/TED 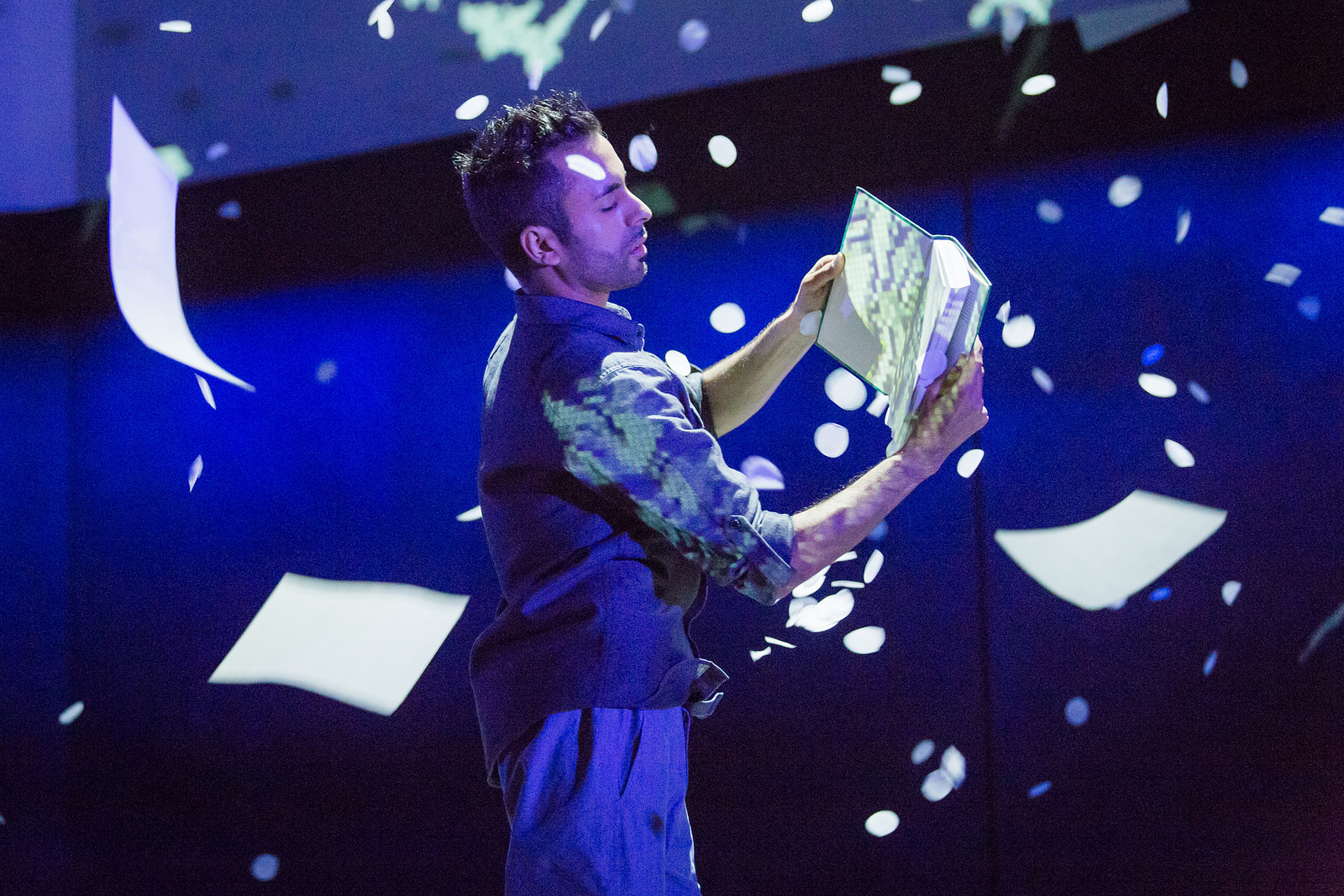 Aakash Odedra’s performance at the very end of TEDGlobal 2014 was astounding. He and his crew had been working every night for days to try to get everything right. The wind machines, paper, and projection mapping all had to come together with his performance just right. The fact that all this intense motion was happening in a very dark environment added to the challenge. Both the video team and I pushed what our gear could do to capture this moment. Photo: James Duncan Davidson/TED 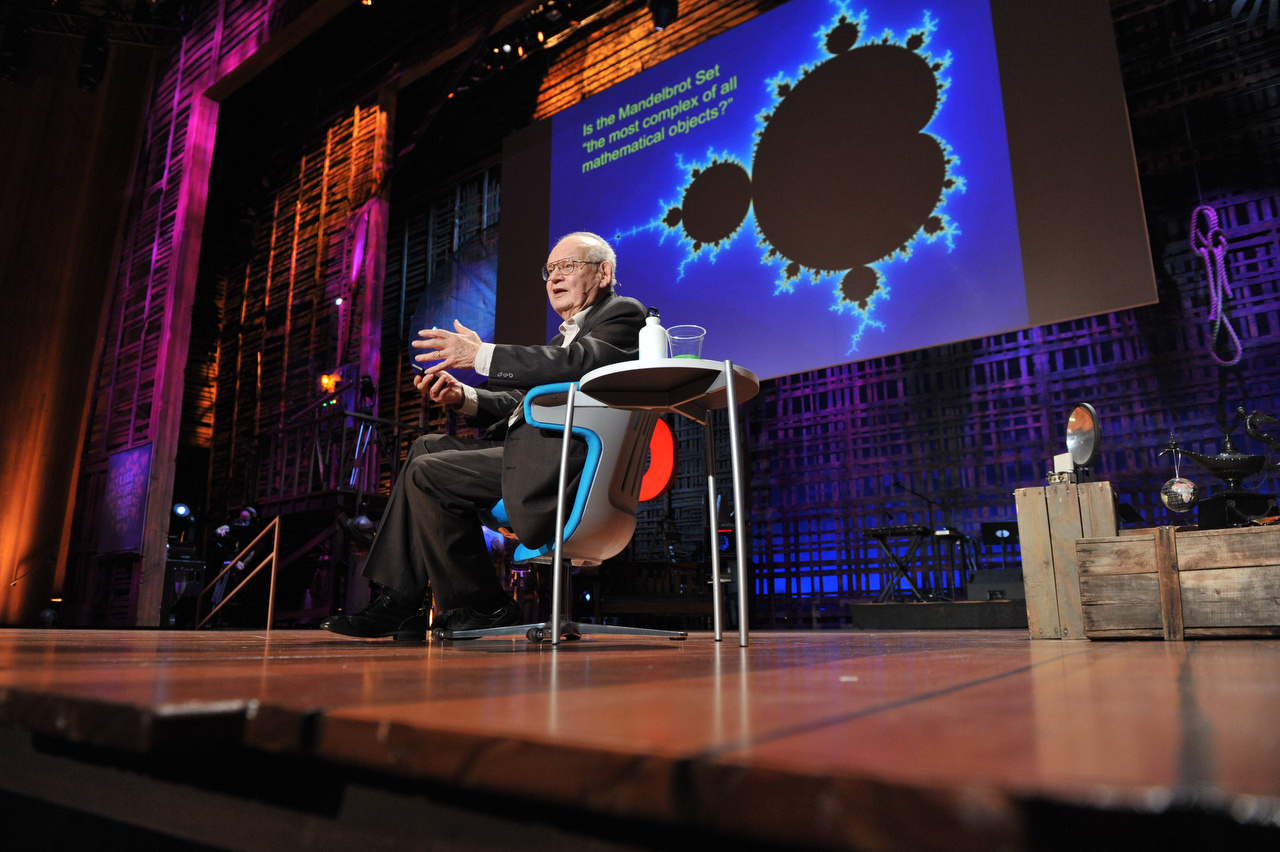 During TED2010 in Long Beach, California, I was on an elevator in the staff area where attendees weren’t supposed to be. This confused elderly gentleman got on, trying to find a restroom. When the doors opened a security guard tried to send him away, but I decided to vouch for him. A simple thing, right? A day later, I watched Benoit Mandelbrot get on stage and talk about the math that fascinated me when I was young. I cannot explain how grateful I was that I had shown a kindness to somebody who I later found out was one of my heroes. And someone who sadly died not long after. That moment made photographing him on the TED stage very special for me. Photo: James Duncan Davidson/TED 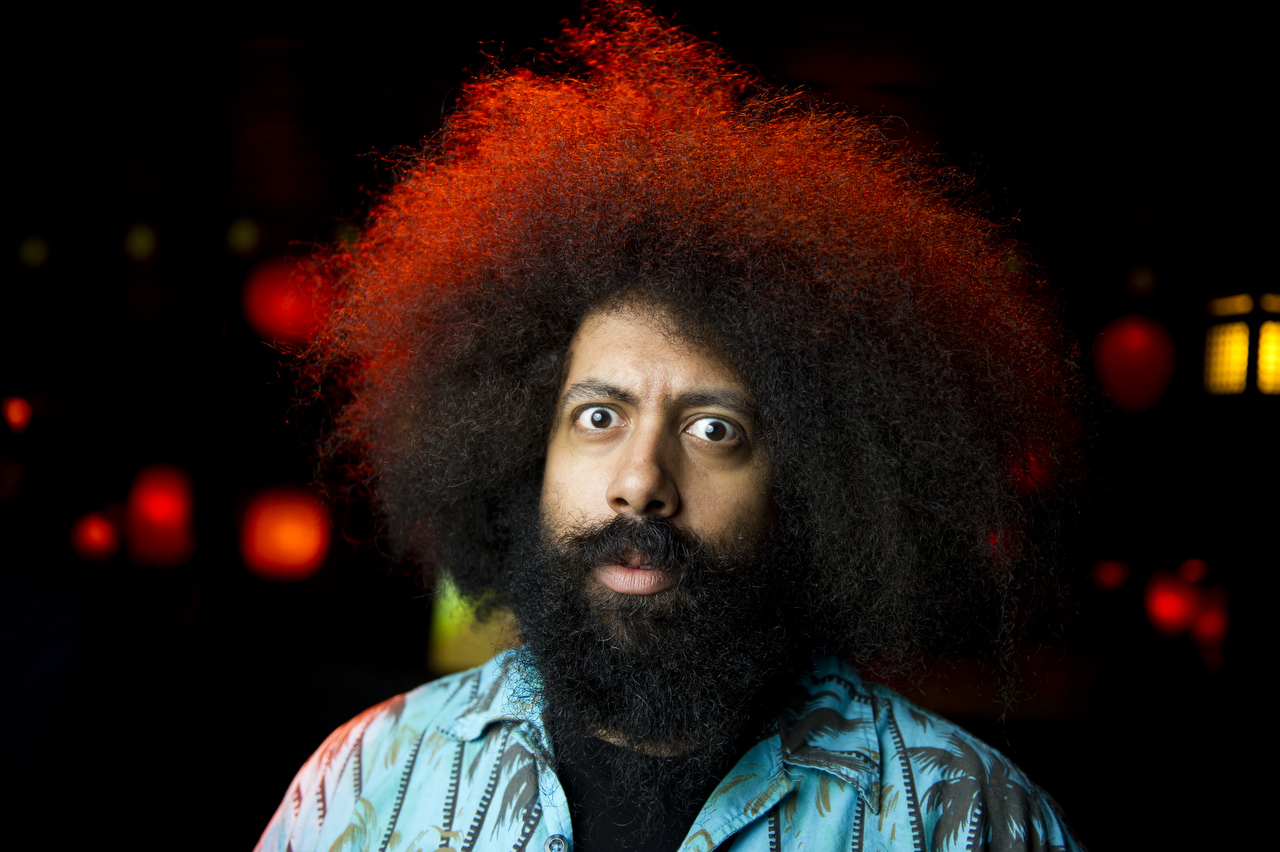 If you’ve ever heard Reggie perform, you know how wild his mind works. I’m here to tell you that it works that way full-time. At the TED2012 Auditions where I took this photograph, he was a non-stop dynamo. The same was true when I saw him again years later in Doha, Qatar at TEDxSummit where we shared a car across the dunes. Reggie Watts freestyling from the back seat while we were bombing across the dunes at high speed late at night? Amazing. Photo: James Duncan Davidson/TED 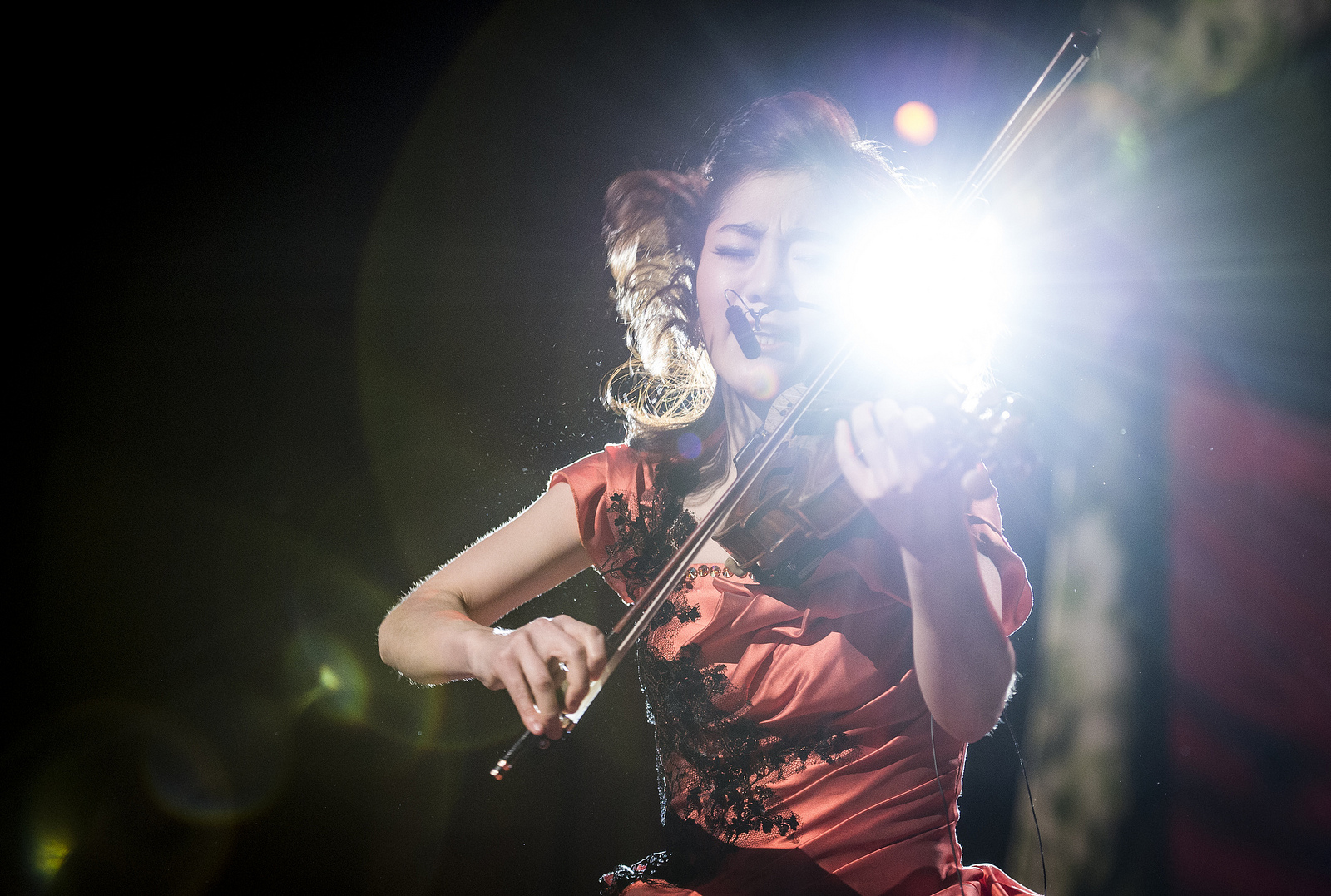 Ji-Hae Park’s performance at TED2013 was electrifying. I was amazed at her intensity during rehearsal and didn’t know how I would adequately capture it. Then, halfway though her performance, the lighting director started strobing high-power white light behind her in a way that I knew I had to use. I moved into position and — through the blinding light — made a photograph of the brilliance of her music. Photo: James Duncan Davidson/TED