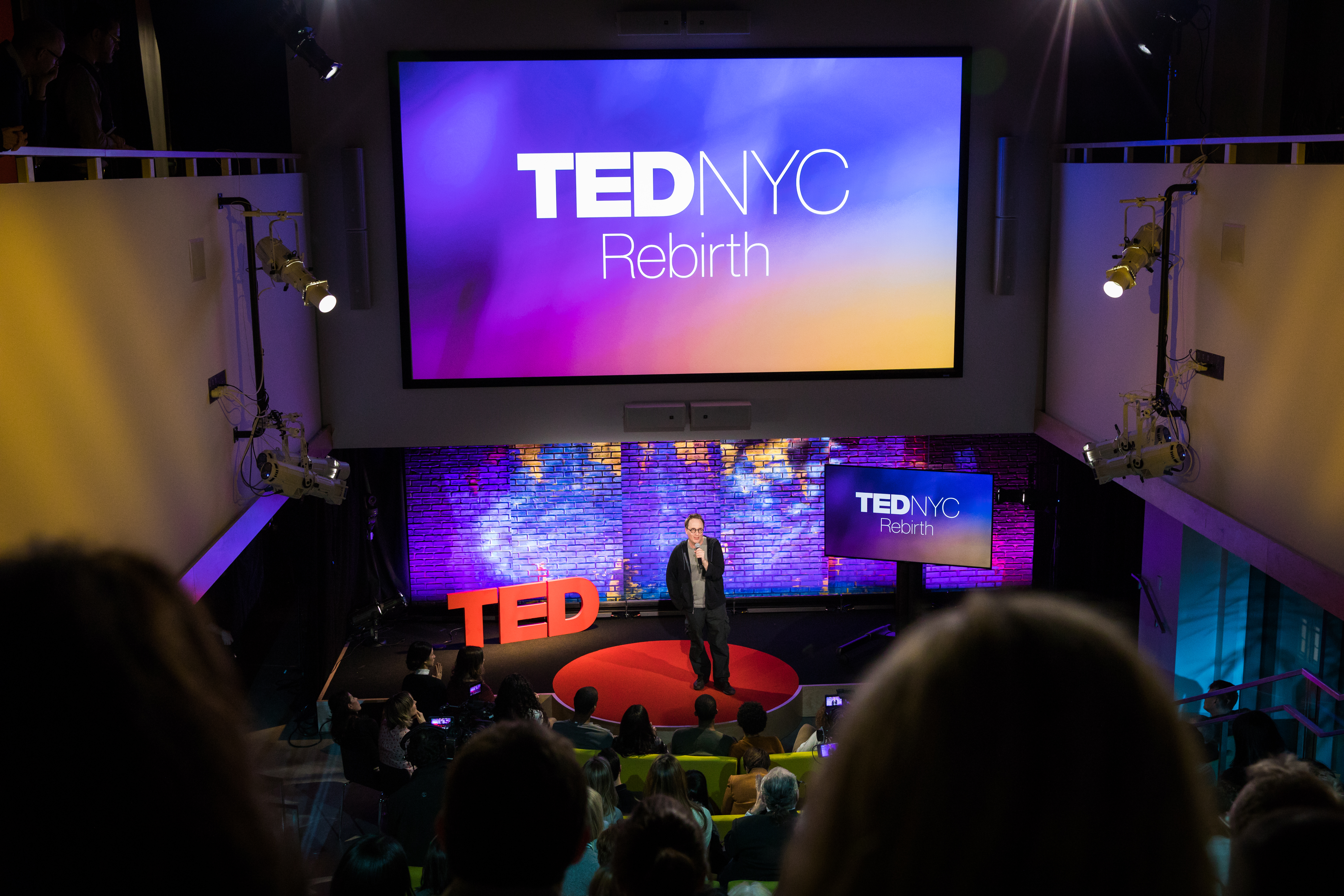 How do we make sense of the tumult around us? How can we grapple with the confusion and alarm so many of us are feeling? In a special session of talks curated and hosted by Jon Ronson at TED HQ on Wednesday night, six speakers looked not at the ruin that follows hardship but the recovery. That’s why we called the session “Rebirth” — because it was a night to talk about redemption.

Whether it’s the crushing grief of losing a child, the manipulation of an electorate or the fear of public humiliation, each speaker has encountered trauma in one form or another. And as they shared their narratives, they offered useful mechanisms for getting a new purchase on reality.

First up was Mona Chalabi, data editor for Guardian US. 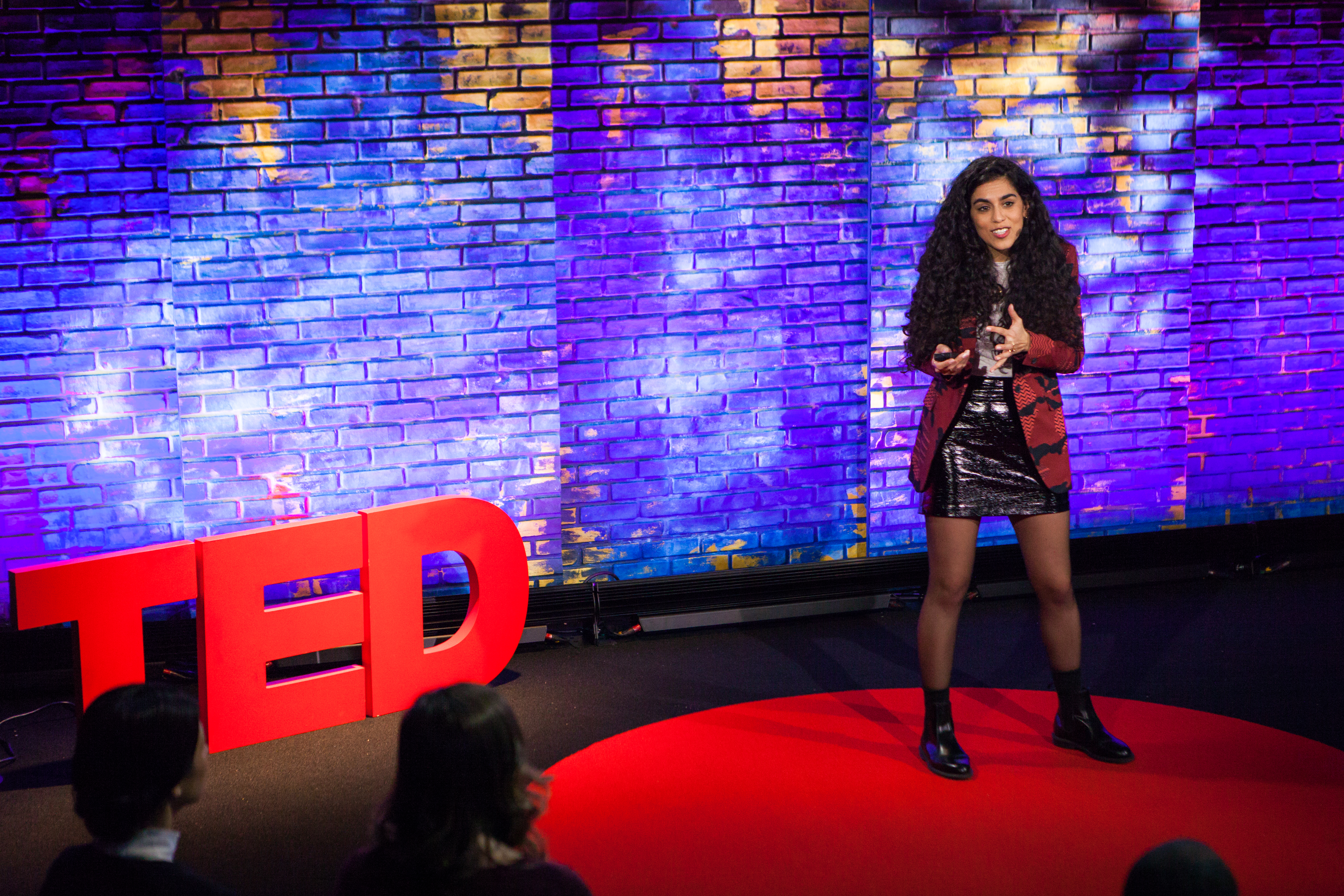 “We’re living in a world of alternative facts, where people don’t find statistics to be a common ground or a starting point for debate,” says data editor Mona Chalabi. “This is a problem.” (Photo: Jasmina Tomic / TED)

How to paint with numbers. In the current age of distrust and alternative facts, people have begun to question the reliability of data from even the most trusted institutions, like the Bureau of Labor Statistics. Once a source of common ground between individuals, government numbers now provide a starting point for contentious debate. There’s even a bill in Congress that argues against the collection of data related to racial inequality. Without this data, “how can we observe discrimination, let alone fix it?” asks Mona Chalabi. This isn’t just about discrimination: think about how much harder it would be to have a public debate about health care if we don’t have numbers on health and poverty. Or how hard it would be to legislate on immigration if we can’t agree on how many people are entering and leaving the country. In an illustrated talk full of her signature hand-drawn data visualizations, Chalabi offers advice on how to distinguish good numbers from bad ones. As she explains, if we give up on government numbers altogether, “we’ll be making public policy decisions in the dark, using nothing but private interests to guide us.”

A story of hope in the shadow of death. When writer/comedian Amy Green’s 12-month-old son was diagnosed with a rare brain tumor, she began to tell her children bedtime stories in order to teach them about cancer. What resulted was a video game called “That Dragon, Cancer,” in which a brave knight named Joel fights an evil dragon. In the game, the autobiographical story of Joel’s terminal illness, players discover that although they desperately want to win and want Joel to beat cancer, they never can. What do you value when you can’t win? In a beautiful talk about coping with loss, Green brings joy and play into tragedy. “We made a game that’s hard to play,” Green says. “People have to prepare themselves to invest emotionally in a story that they know will break their hearts, but when our hearts break they heal a little differently. My broken heart has healed with a new and deeper compassion.” 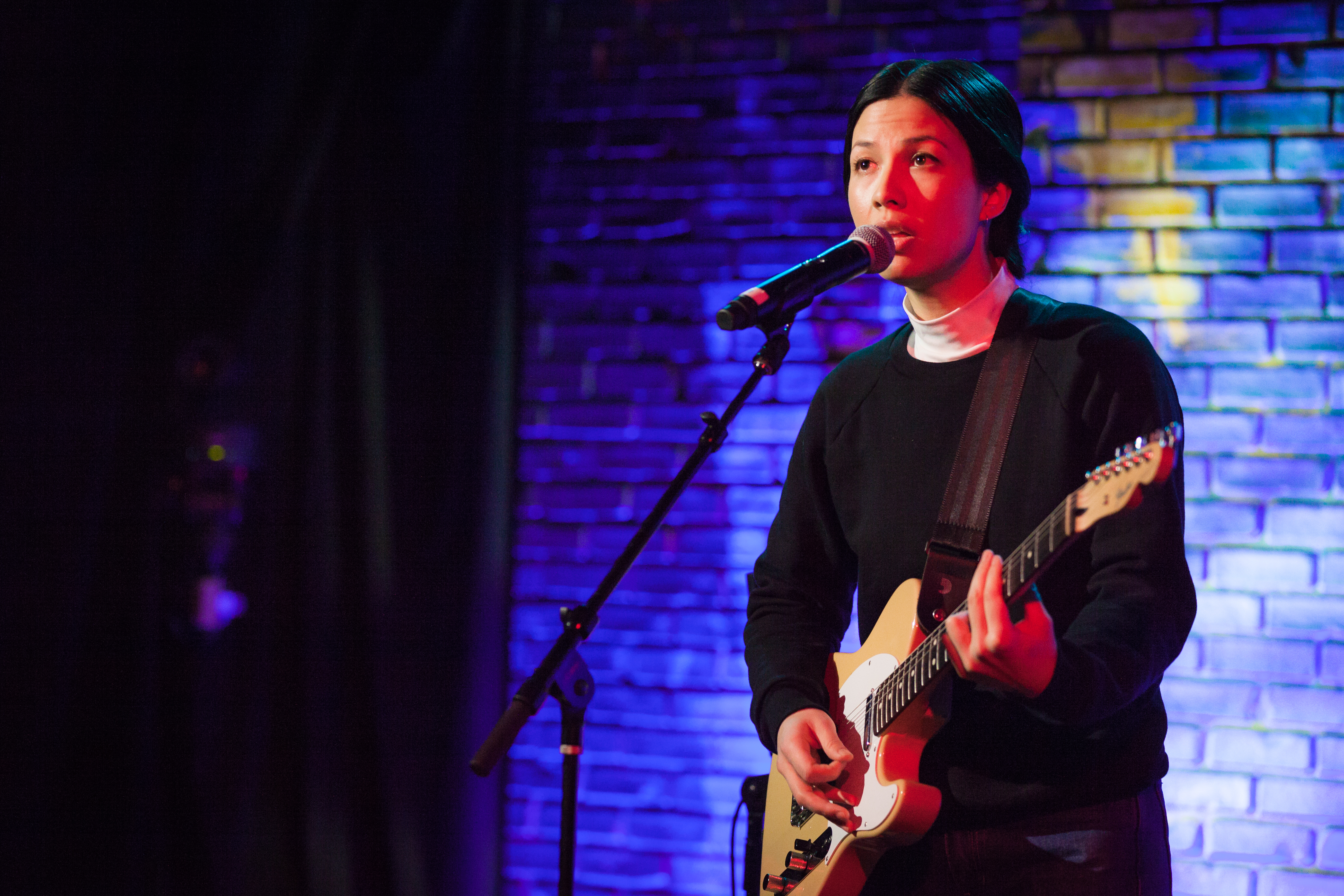 With speech and song, Emmy the Great shares her story about standing out, fitting in and finding her identity through music. (Photo: Jasmina Tomic / TED)

Where East meets West. Emmy the Great grew up wrestling the East and West within herself — the East of her Chinese mother, the city of Hong Kong where she was born, and the West of her English father, her British peers, and the UK, where she grew up. But her 30th birthday blessed her with a unique coming-of-age moment, and she finally decided to claim her intersectional identity. She plays two lulling songs on a quiet electric guitar, “Swimming Pool” and “Soho,” with lyrics that swing gently between English and Cantonese.

Finding certainty in an uncertain world. At a time when the world feels like it’s been turned upside down and the only constant is chaos, it’s easy to slip out of reality and question your sanity. This phenomenon has a name: gaslighting. It’s a tool of manipulation familiar to author Ariel Leve. Leve grew up in a Manhattan penthouse, the daughter of a glamorous poet and artist, surrounded by interesting and artistic people. Her mother’s raucous weeknight dinner parties were a mainstay of her childhood, as was a tendency for her mother to tell her that what she thought had happened hadn’t actually happened. Facts were routinely batted away, and Leve was sprayed with words of contempt, which her mother would invariably deny. “One of the most insidious things about gaslighting is the denial of reality, being denied what you have seen with your own eyes,” Leve says. “It can make you crazy. But you are not crazy.” Leve shares a few strategies, including remaining defiant, letting go of a wish for things to be different and writing things down, that helped her survive and validate her reality. 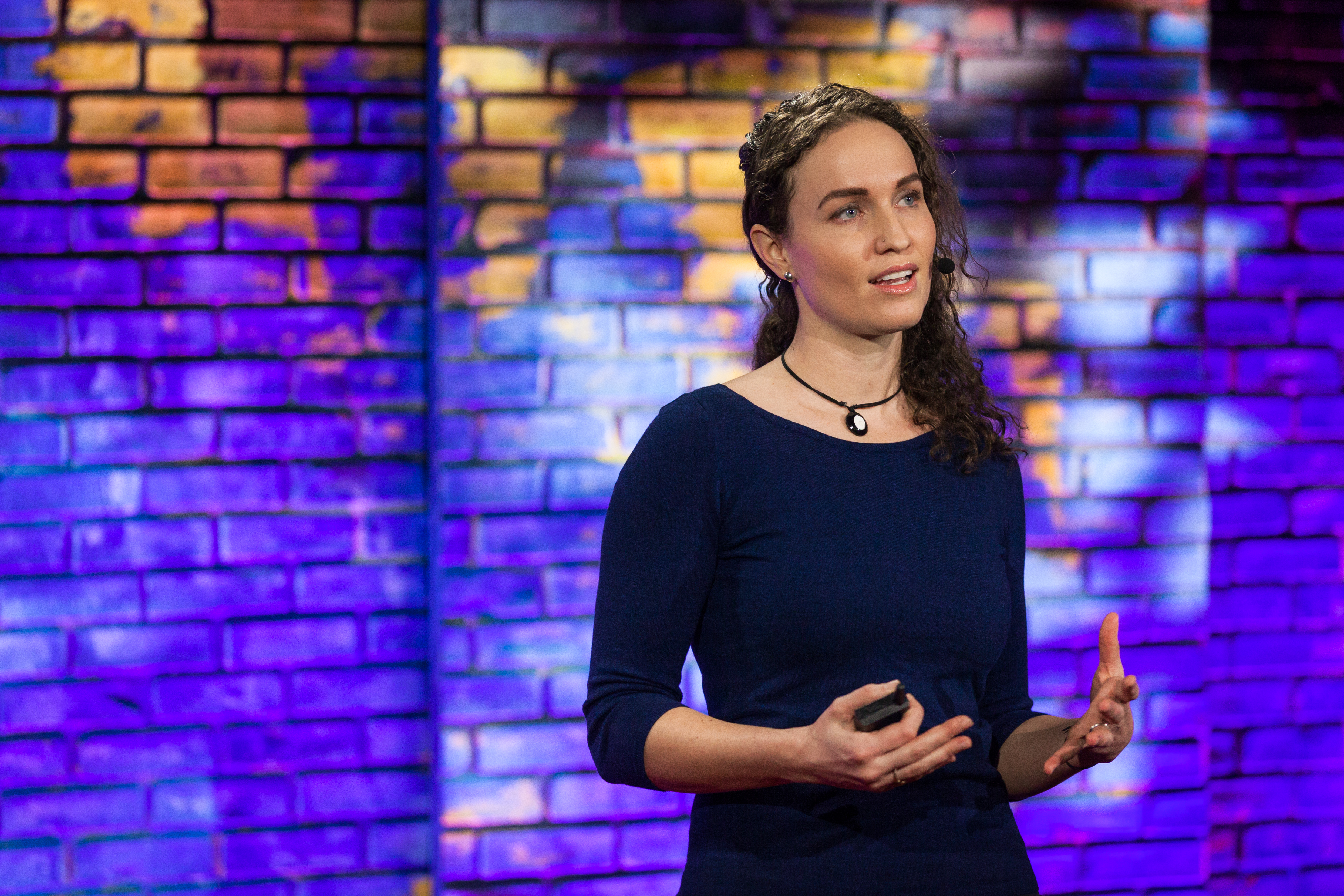 “Escalating disgust and intractable conflict are not what we want for ourselves, our country or our next generation,” says Megan Phelps-Roper. (Photo: Jasmina Tomic / TED)

End the spiral of rage and blame. When she was was five years old, Megan Phelps-Roper joined her family on the picket line for the first time, her tiny fists clutching a sign she couldn’t yet read: “Gays Are Worthy of Death.” As a member of Westboro Baptist Church, Phelps-Roper grew up trekking across the country with her family, from baseball games to military funerals, with neon protest signs in hand to tell others exactly how “unclean” they were, and why they were headed for damnation. In 2009, her zeal brought her to Twitter where, amid the digital brawl, she found a surprising thing: civil, sometimes even friendly conversation. Soon these conversations bled into the real world, as people she sparred with online came to visit and talk with her at protests. These conversations planted seeds of doubt, and in time she found that she could no longer justify Westboro’s actions — especially their cruel practice of protesting funerals and celebrating human tragedy. Phelps-Roper left Westboro in 2012, and after a period of turmoil she found herself letting go of the harsh judgments that instinctively ran through her mind. Now, she sees that same “us” vs. “them” impulse in our public discourse, where compromise of any kind has become anathema. “That isn’t who we want to be,” she says. “We can resist.” She offers four small, powerful steps to employ in difficult, disagreeable conversations: stop assuming ill motives in others, ask questions, stay calm in disagreement and make the case for your beliefs with generosity and compassion. “The end of the spiral of rage and blame begins with one person who refuses to give in to destructive, seductive impulses,” she says. “We just have to decide that it’s going to start with us.”