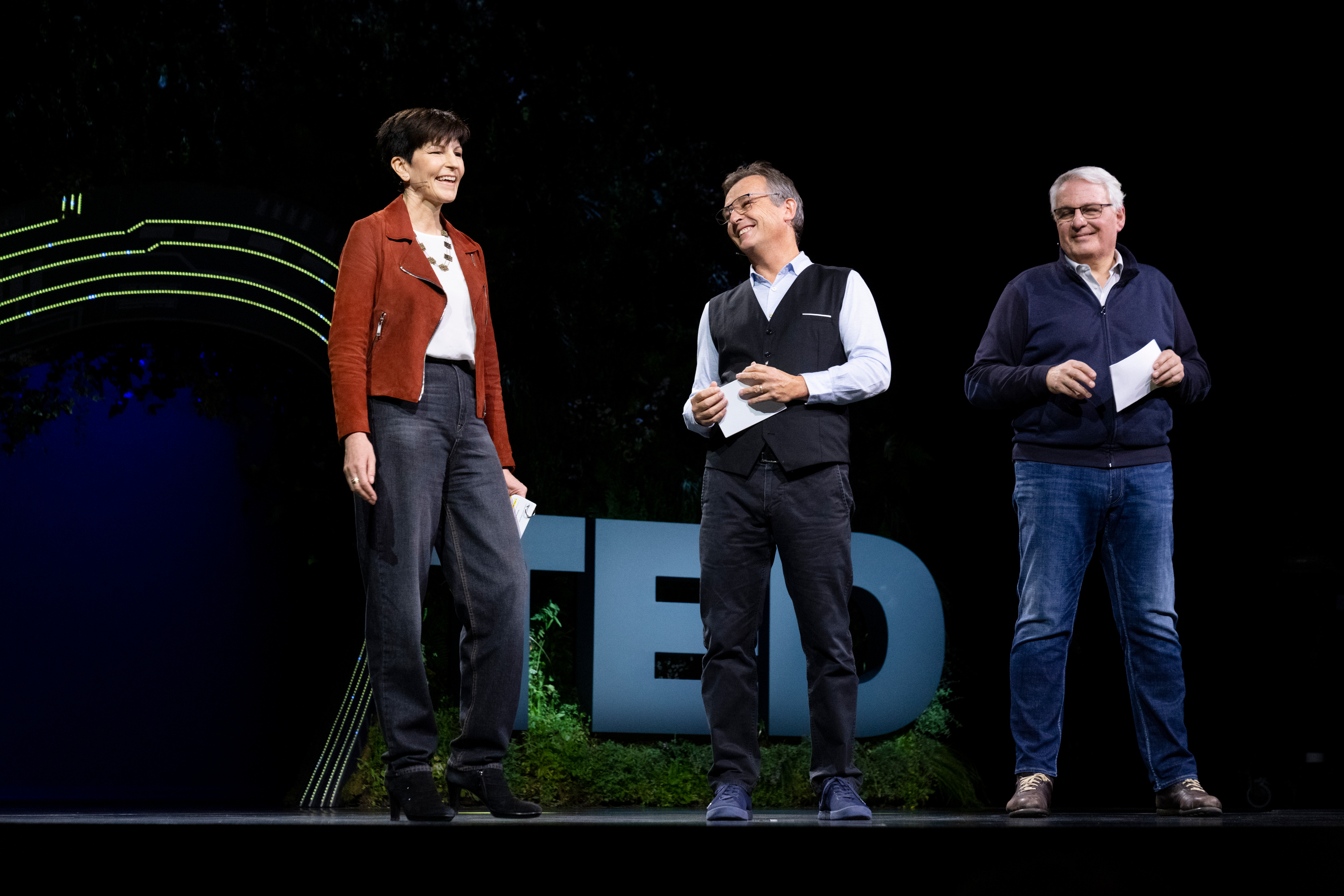 Countdown is the most ambitious initiative TED has endeavored upon. A meeting point and invitation to all, from any walk of life, to participate in the story of solving the climate crisis in urgent and crucial ways. A call-in to businesses, governments, society, investors and everyday people to drive action with passion, energy and a deep desire for change.

Bringing together individuals who have spent decades pushing toward a zero-emission future and highlighting the new generation of dedicated changemakers, Session 1 took the first step on the marathon path to curtailing the world’s biggest existential threat with ambition, realism — and an invigorating dose of optimism.

Performances: Let It Happen, a dance trio comprised of Dutch twin sisters Norah and Yarah along with younger sister Rosa, who vibrantly lit up the TED stage to remixes of classic American songs “Get On the Good Foot” by James Brown and “Hit the Road Jack” by Ray Charles. 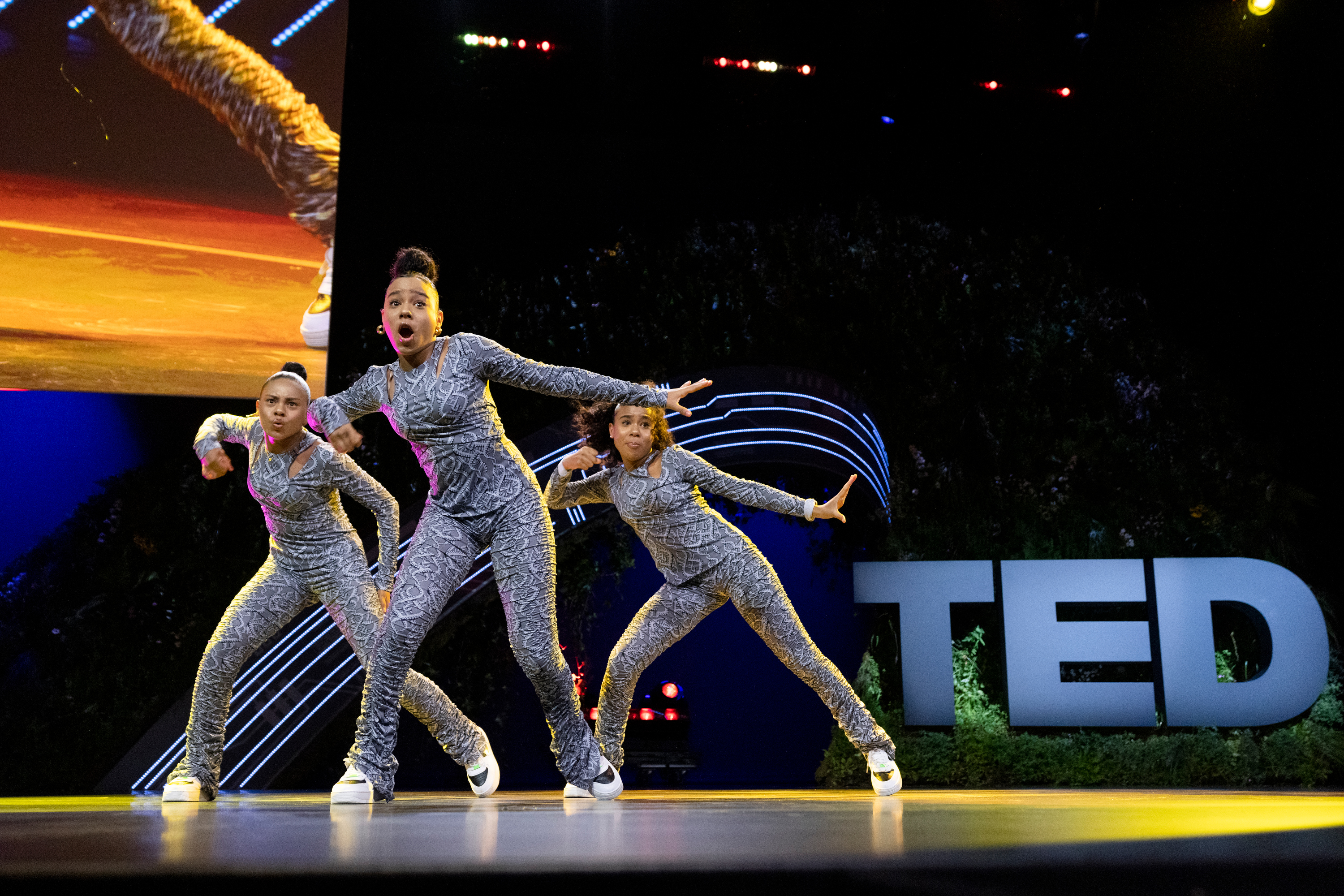 Let It Happen performs at Session 1 of the TED Countdown Summit on October 12, 2021 in Edinburgh, Scotland. (Photo: Ryan Lash / TED) 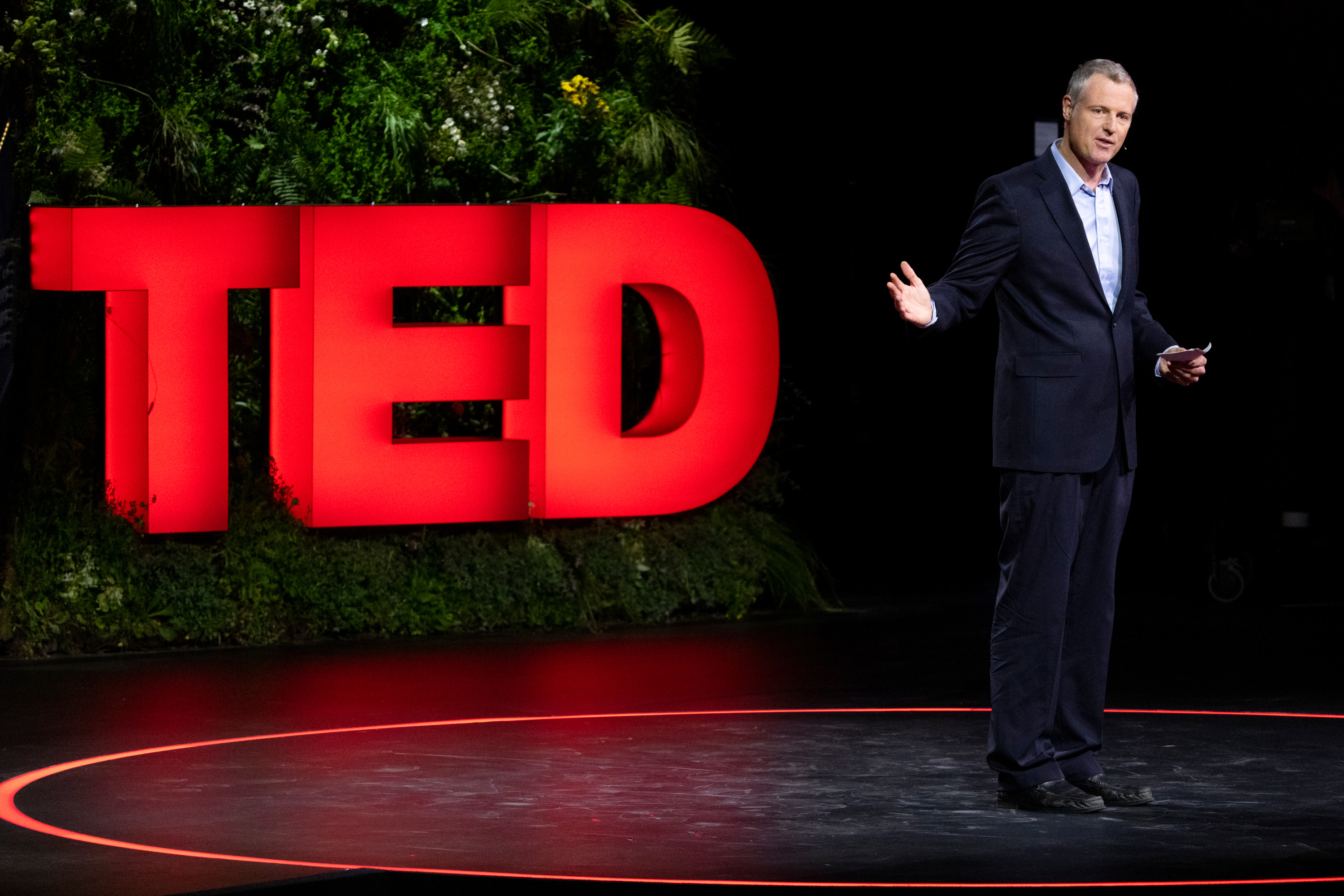 Big Idea: Restoring and preserving natural systems is humanity’s single greatest mission in the fight against climate change — but in order to achieve this, governments need to prioritize protecting nature.

How? Despite knowing that Earth’s ecological systems make life possible, forests continue to be cut down and oceans filled with trash as climate change reaps its effects. Clean technology has made big leaps towards curbing the destruction by pushing for green energy and renewables, explains UK Minister for the Pacific Zac Goldsmith, but tech can’t compare to the solutions nature has to offer if restored. Take mangroves, for example, which absorb carbon from the air and protect coastal communities from storms but are not as prioritized as cement defenses that function at only a fraction of the efficiency mangroves naturally provide. The issue lies in what solutions the economy values most. “Markets barely register the cost of destroying those natural systems, and until governments change that … we are always going to be playing catch up,” says Goldsmith. He urges governments to pass laws that protect at least thirty percent of land and sea by 2030, to support the world’s Indigenous peoples and to remove deforestation and degradation from supply chains. By redirecting incentives (and budgets), nature can recover from the damage of all the systems in place set against it — and thrive. 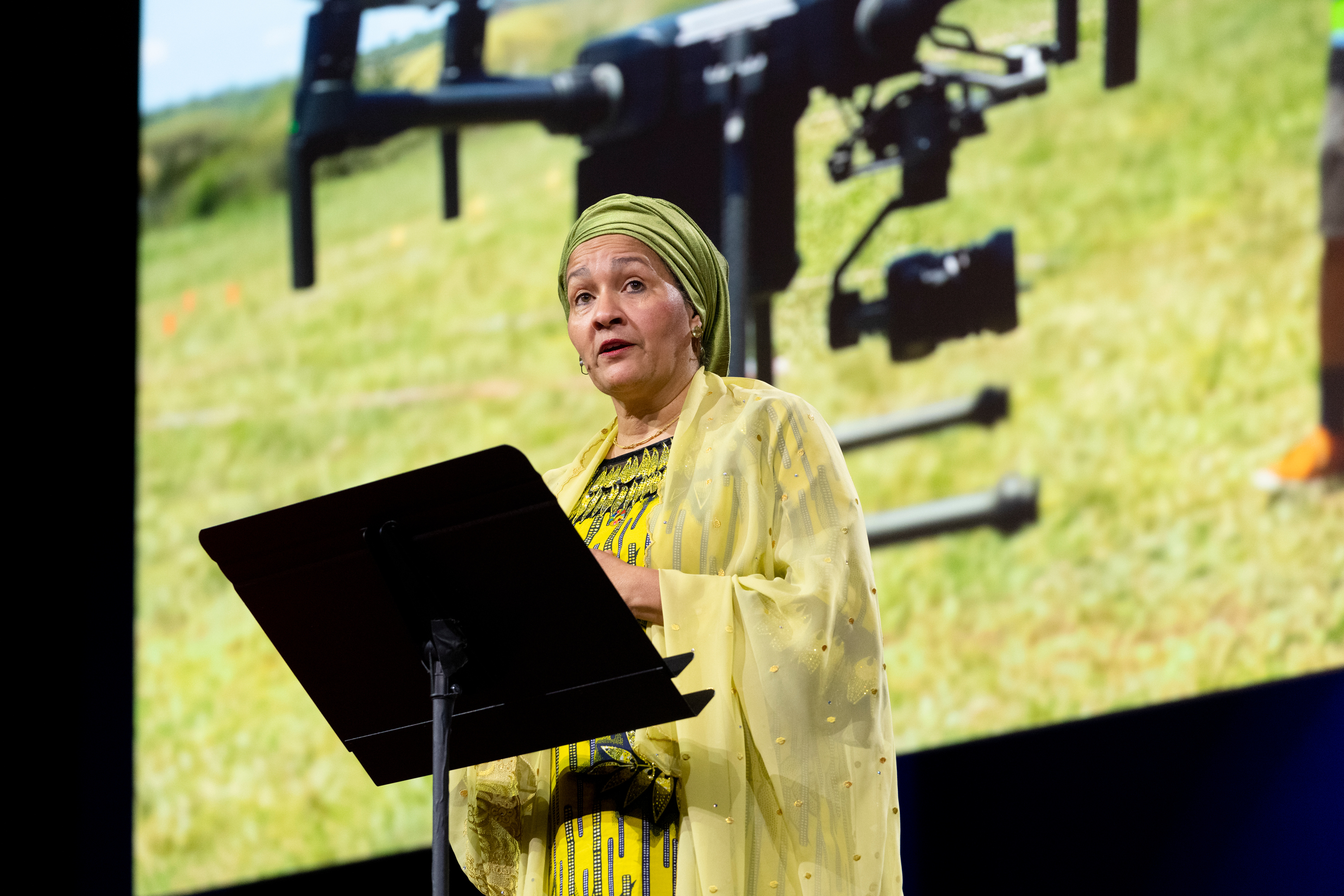 Big idea: As we work to decarbonize the global economy, we should prioritize projects like the Great Green Wall that use climate action as a vehicle to deliver dignity, economic opportunity and equality for all.

How? When UN Deputy Secretary-General Amina J. Mohammed was a young girl, Lake Chad looked like an ocean — it touched the border of four countries and sustained over 30 million people. Today, more than 90 percent of this freshwater basin has dried up, along with the economic opportunities it once provided for millions of farmers, fisherfolk and marketplace sellers. The devastation grows with extreme weather events like the dry, windy Harmattan, meaning “more jobs lost, hunger and families displaced — a perfect storm for instability and, sadly, more violence.” But Mohammed remains hopeful; she believes we can decarbonize our planet and meet the aims of the Paris Climate agreement through strategic climate action that invests in human potential. She provides the Great Green Wall — a project aiming to plant 100 million trees on the edge of the Sahara to stop desertification, restore degraded land and improve water harvesting — as an example. Beyond the climate benefits, Mohammed believes the project will create green economic opportunities for half a billion people. She acknowledges that transformative climate actions like this will require massive investments from rich countries and, perhaps more importantly, vocal solidarity from people worldwide. “Friends,” she says, “it’s time to make some serious noise.” 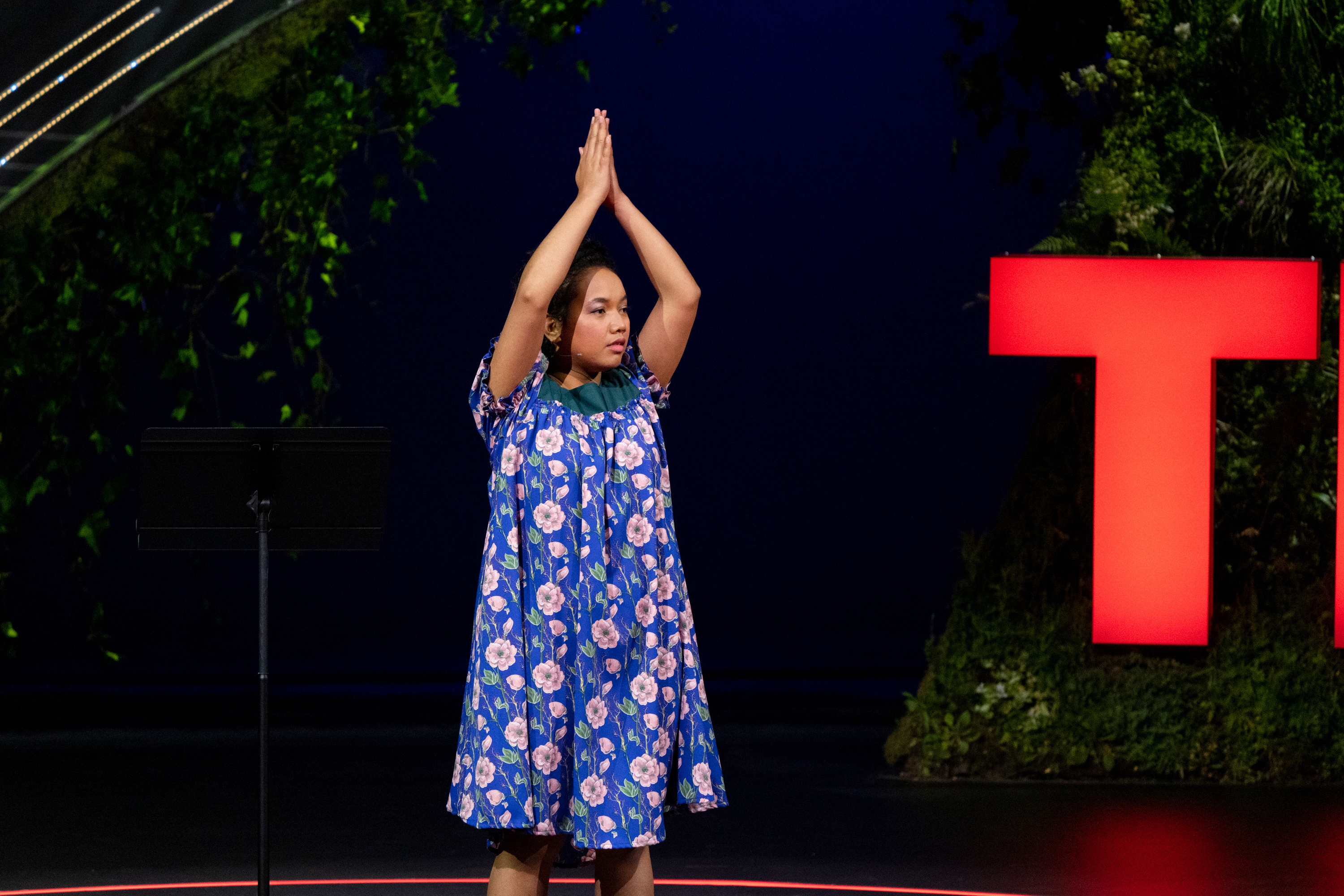 Big idea: Communities at the frontlines of climate change like the low-lying Marshall Islands in the Pacific Ocean are at risk of losing everything to something they didn’t contribute to creating. Climate adaptation is now their only choice.

Why? For 23-year-old climate warrior Selina Neirok Leem, climate change isn’t a distant threat to be negotiated over decades-long timelines — it’s the ever-present reality of her home in the Marshall Islands. The youngest delegate at the COP21 conference that adopted the Paris Agreement in 2015, Leem and her fellow Marshall Islanders now bear witness to floods from continually rising seas that routinely send them seeking shelter on hard-to-find high ground, threatening livelihoods, access to clean water and their way of life. In a stirring poem and talk, she explains that climate adaptation is the only choice for her people now. “We’ve been told to move. To become climate change refugees,” she says. “I’m not even sure who would even take us in. But to those who think that we should just accept our fate, I want to say: adaptation and indigenous knowledge are the solutions.”

Big idea: There are three key messages about the climate crisis that you need to know.

What are they? First, a message from the scientific community: the Sixth Assessment Report the UN Intergovernmental Panel on Climate Change (IPCC), the latest in a series of landmark reports that assess the threat of climate change, is a code red for humanity, vividly explaining the alarming extent of the global crisis. As climate impact scholar Johan Rockström says, the alarm bell of climate change has been ringing for decades, but humanity kept hitting the snooze button. Now is the time to wake up and act. Message two: tipping points. We are now forced to consider the real risk of destabilizing the planet, as the big biophysical systems that regulate climate — from the Greenland ice sheet to the Amazon rainforest — approach their irreversible tipping points that could make Earth uninhabitable for humanity. As Rockström puts it: “We’re sleepwalking in a minefield.” Finally, message three: the window of opportunity is still open, but barely. He stresses the importance of all countries participating in the transformation to sustainability, going from billions to trillions in investment and putting end dates on coal and the combustion engine.

Big idea: We need to stop thinking about climate change as a problem and regard it more as an opportunity.

Why? We have better technologies, policies and, most importantly, a clearer sense of urgency bundled with some of the best minds of our time dedicated to solving the climate crisis. As an investor, Gabriel Kra knows this firsthand from his experience in Silicon Valley, where he has a bird’s-eye view of the entrepreneurs, inventors and fellow investors focused like never before on what he calls “the great business opportunity of our generation.” From his soaring optimism, he offers a few on-the-ground details from electric cars and alternative energies to sustainable architecture and optimized software that should be cause to share in his building excitement for these burgeoning technologies. And these examples are just the beginning, Kra explains. Each new or improved aspect paves a better and more realistic path toward a greener future. By constantly developing and revolutionizing innovations, we are on track to solve one of the biggest problems of our time — and that’s something to be wildly optimistic about.

Big idea: There are distinct pathways to transform the economy and ratchet up climate ambition.

How? As High Level Climate Action Champion for the 26th UN Climate Change Conference of the Parties (COP26), Nigel Topping works to help economies scale up their climate ambitions in support of local governments ahead of the landmark meeting. So, what’s changed since the Paris Agreement of 2015? Topping says there’s a much stronger sense of urgency, driven in part by our lived experiences — the disruptions of climate change feel closer to home than ever — and the reality that we can not just achieve sustainability but instead make it the key development story of this century. The focus now should shift to positively disrupting the patterns of the global economy that keep us from climate action and creating ambition loops between policy and the private sector to accelerate progress.

How? At Mærsk, the world’s largest maritime shipping company, Jim Hagemann Snabe is leading an effort to decarbonize logistics by 2050. After looking at carbon-reducing options like “slow steaming” — slowing down the speed of a vessel so it uses less fuel — and running ships on battery power and liquid natural gas, Mærsk, the A. P. Moller Foundation and the Center for Zero Carbon Shipping in Copenhagen think they’ve landed on a viable path towards carbon neutrality for the shipping giant: Power-to-X. Through a special process, Power-to-X turns green electricity into a green liquid fuel that can be used in combustion engines, meaning existing ships can be retrofitted to run on renewable energy. While still expensive, the benefits of Power-to-X greatly outweigh the costs — and Hagemann Snabe urges governments to show leadership by imposing a global price on CO2, which would eliminate the affordability argument completely. “We have the technologies needed to create a sustainable future. What we need is leadership to get us there faster,” he says.

Big Idea: A global movement towards emissions-free transport is one of the key steps towards a sustainable future in the face of climate change — and everyone has a role to play.

How? Leading the shift towards clean transport, 70 organizations have come together to establish the Drive Electric campaign, an initiative pushing for all new road vehicle sales to be electric by 2035. Spearheading this movement over the crucial next five years, electrification advocate Monica Araya is working to set the world on a path towards completely emissions-free transportation — which will potentially cut 160 billion tons of cumulative carbon dioxide emissions. To reach these goals, she explains, we have to work with all levers of change, from cities to politicians to corporations to citizens so this goal can be funded — and realized. The price tag for change? Araya says the switch to all-electric will cost $1 billion — and announces that the Audacious Project, TED’s initiative to inspire and fund global change, has recently secured a breakthrough $300 million in funding towards this effort. With hopes of inspiring other industries to follow suit, these big leaps towards climate stability show that scalable change is possible and every effort towards it counts. 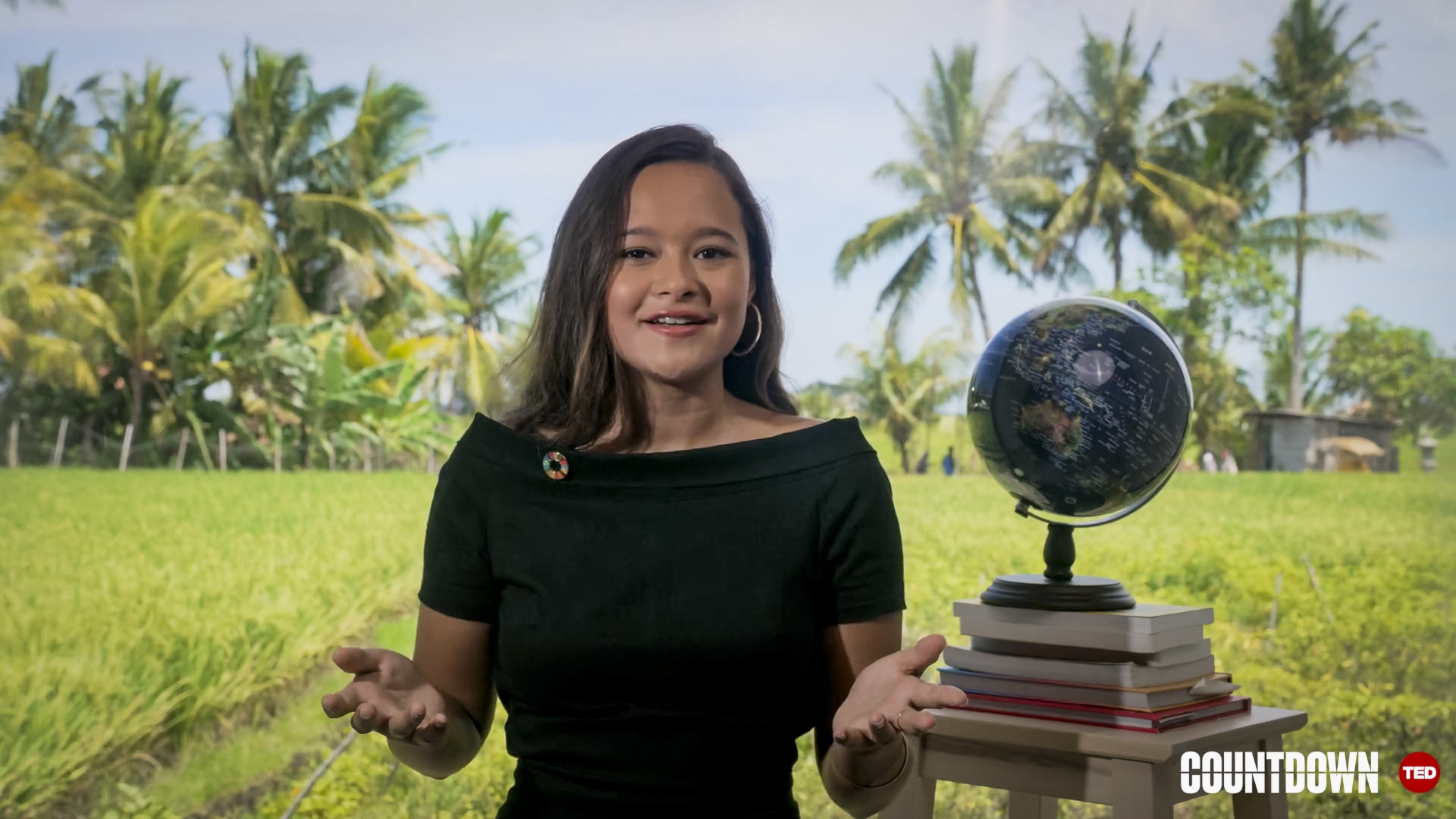 Big idea: When starting on the journey of activism, young people need tools and support to lead and make the change they want to see in the world.

How? Activism is a tough job, especially for young people yearning for immediate change — something climate activist Melati Wijsen has learned over ten years of pushing for environmental protection, starting at age 12 in her home on the island of Bali, Indonesia. How can young changemakers acquire the skills they need and keep from burning out? First, Wijsen says, activists must take care of themselves. When exhaustion sets in, it’s time to take a break and rely on colleagues to continue the work. Second, create support networks to share resources, information and inspiration — like Circle of Youth within YOUTHTOPIA, an educational platform where activist peers learn from each other. Third, look out for companies touting youth activism to advance their brands — a tactic Wijsen calls “youthwashing.” Young people seeking change need seats at the bargaining table, not lip service for their causes.