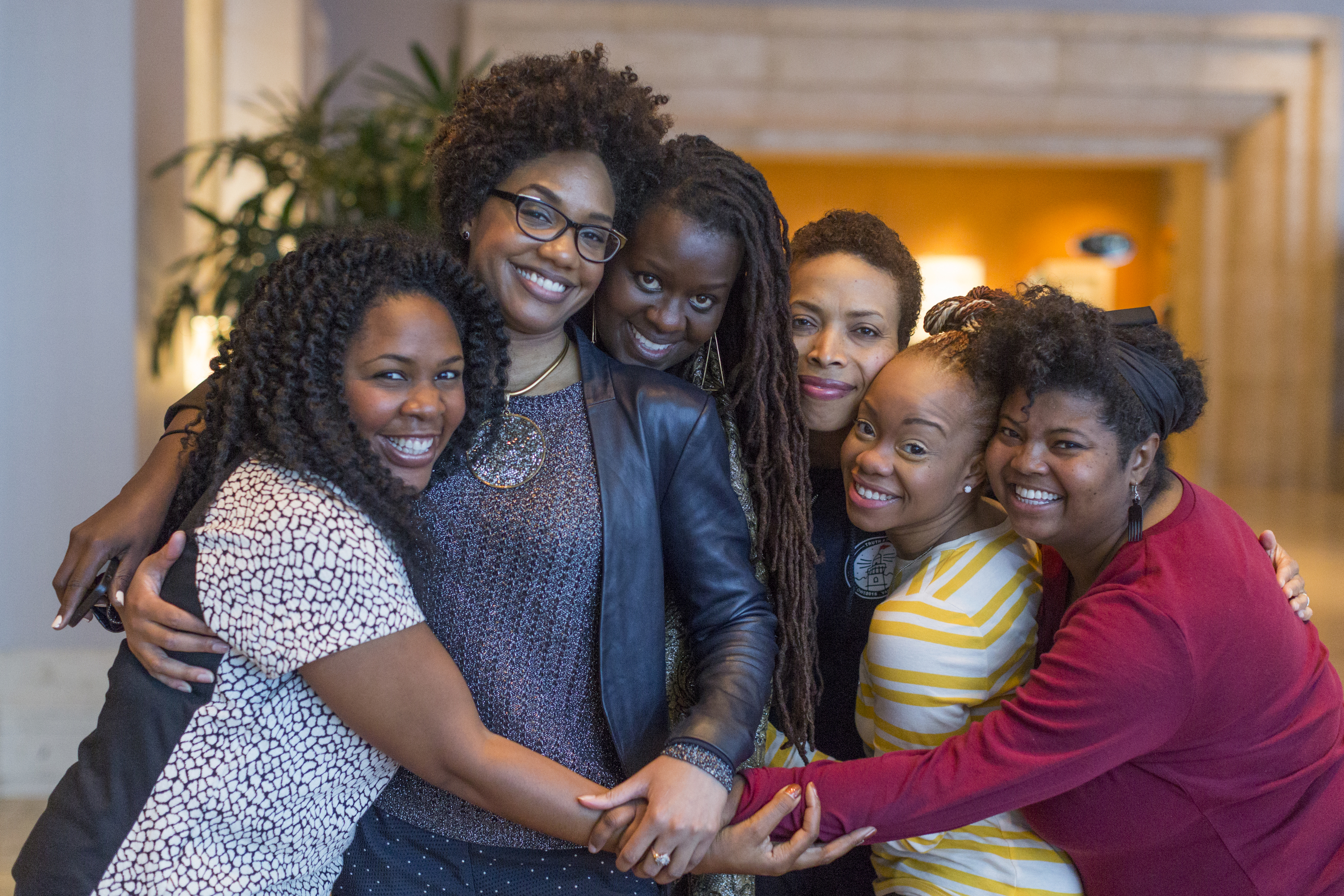 This photo taken at the Fellows Closing Dinner of TED2015 gives me incredible joy — six Black women who are masters in different fields loving each other. In the aftermath of the domestic terrorism perpetrated at Charleston’s Mother Emanuel, it also leads me to a moment for reflection. Photo: Ryan Lash/TED

They say a picture is worth a thousand words. This picture was worth all the words I had — it rendered me speechless. It’s an image of six Black women, smiling and hugging, taken by Ryan Lash at the TED2015 conference. There we were —  LaToya, Somi, Aomawa, Camille, Danielle and myself — in all of our various and sundry Black Woman-ness.

It took me a long time to figure out why I had such a visceral reaction to this image. I couldn’t decide if it was just a beautiful shot in terms of lighting and composition, or if I just really liked the people in it. All I knew was that it resonated with me, so I did what many people do with pictures that mean a lot to them: I put it on Facebook. Within minutes it had dozens of likes. It ended up lifting out of my friend-set and circulating through a larger network. It seemed that my reaction was more universal than personal.

What brought the six of us together was the TED Fellows program; we are each a part of this unique and life-changing fellowship. Since TED Fellows are often described as “up-and-coming,” I wanted to introduce you to this powerhouse group. They are talent, expertise and creativity, personified.

On the right is Danielle N. Lee, biologist and outreach scientist. She’s a postdoctoral research associate at Cornell University, as well as the author of The Urban Scientist, a blog at ScientificAmerican.com.

Smiling brightly second from the right is Camille A. Brown, a choreographer who has achieved many accolades for her daring works. She is interested in that space between dance and theater where work defies category and takes flight. Her new work, BLACK GIRL: Linguistic Play, will premiere in the fall of 2015 and inspired a new community engagement initiative.

Third from right is Aomawa Shields, astronomer and astrobiologist — a fellow at both UCLA and Harvard. She studies the possible climates of extrasolar planets, and uses theater, writing and visual art to teach astronomy to middle school girls of color.

Next to her is Somi, an East African jazz vocalist, songwriter and recording artist who is originally from Rwanda and Uganda, but was raised in Illinois. (And now lives in New York City.) She is the founder of New Africa Live and has been called the “new Nina Simone.”

On the far left of the image is me: Jedidah Isler. I’m an astrophysicist and fellow at Vanderbilt and Harvard, studying supermassive, hyperactive black holes. I’ve loved the night sky since I can remember, and am committed to creating a STEM tsunami by encouraging and equipping the next generation of students — particularly those of color.

Now that we have the introductions out of the way, I want to dig deeper into why this picture struck me so viscerally. It was an impromptu shot, taken the last day of the TED2015 conference as we were headed to our closing Fellows dinner. Suddenly there we were, loving on and being loved by one another.

It could easily be a commercial for some carefree activity of uber-beautiful women — a diverse set of Black Women all inhabiting the depth of what that identity means to us. But beyond the superficial, I’m struck by the depth of expertise here. In this photo, you see six times 10,000 hours, spent on topics as diverse as behavioral psychology and urban ecology, music and improvisation, self-portraiture and photography, astrobiology and exoplanets, dance and choreography, astrophysics and blazars. All of us have some aspect of our work that connects to diversity, inclusion and social justice. Think about that for a second. We all come from different walks of life, have had different lived experiences, and yet when we came together there was a deep sense of knowing. Even more than that — of belonging.

I was so taken with this image that I had to see if the other women in the photo had the same reaction to it. So I asked what they thought.

Aomawa: “Looking at this picture, I see many shades of awesome.”

Danielle: “Upon seeing this photo I thought, ‘These ladies are my heart, and it is full of love and pride.’ I love that I have the honor of being affiliated with these bright, brilliant and high-achieving women through TED — a platform that celebrates brilliance around the globe. We are beautiful African women of every hue, representing the arts, sciences, humanities and activism. We are recognized as innovative. That makes me hype.”

Somi: “Beauty, brilliance and sisterhood. This photo reminded me of the inspired presence of all the diverse Black female narratives heard and seen at TED this year across disciplines.  Hopefully, that presence means that such identities are moving closer to being the norm and less of a ‘story.’ Perhaps. TED is an influential organization. By creating space for all of us, TED is playing a critical role normalizing diversity in fields.”

Camille: “I came to TED after some racially charged experiences performing my company’s new work. So I felt that my personal and professional mission — to move toward a better understanding that we are all equal in society — was even more relevant when I saw this photo. There we were — a beautiful representation of the spectrum of ‘Black girl,’ each standing in our individual truths. We were lifting each other up, honoring each other, loving each other. We understood what it meant for us to be together at TED. This picture was my emotional recovery.”

LaToya: “I knew this moment needed to be documented to defy all the expectations, myths and silence surrounding our existence at TED, in our communities and in our respective professions. The warm embrace that permeates this photograph is so important for me personally because it shows one of the rare times when I felt safe, when I was just truly enjoying my life knowing that the moment was much bigger than me.”

As I think about it, this is the crux of it for me: the space of familiarity in the context of the larger TED crowd. While there are certainly TEDsters of color — and all TEDizens are generally very friendly — the audience is overwhelmingly white and it isn’t the diverse place that it will be. While I met and befriended many people from other ethnicities over the week of the conference, it was this split-second — this precious, captured moment — that reminds me that, wherever I am, there is a home for me.

The beauty of the moment is only amplified in its context at TED. Just a few weeks earlier, I had been at the National Society of Black Physicists and had embraced another set of promising men and women of color. I felt the same sense of knowing and belonging there, in a larger context of black excellence. Do I think the former outweighs the latter? Absolutely not. I think both experiences are critically important to my well-being. I think being in both kinds of spaces — those that are completely familiar and those that stretch us beyond what we ever imagined — is extremely important.

In the wake of the domestic terrorism perpetrated on Charleston’s Mother Emanuel African Methodist Episcopal church last week, I have revisited this picture many times. When I first decided to write about the photo, it was from a place of unbridled joy; I had found a space that was both beyond my wildest dreams and comfortingly familiar all at once and had a great sense of hope about what it means to exist — in this body — in the TED space. I struggled about whether this article would be appropriate now that we have sadly reentered a place of collective mourning.

But what I found was a reaffirmation of why this picture was so precious to me in the first place; Black women living their best lives and being their best selves in a cultural environment that is not always amenable to such. It’s not lost on me that there were six Black women killed in cold blood in Charleston because of a lethal mix of racism and hatred, and six Black women pictured above. In some ways we are no different than our slain sisters; they too were united around a common experience — their strong faith — while also inhabiting very different lived experiences. There might even be similar pictures of the victims from Mother Emanuel embracing in their collective love as well.

In moments like these, I am reminded that to be a Black woman — living and breathing in this country — is revolutionary. To get to do so alongside these particular women is a deep honor. To persevere through this moment of psychic pain in the hopes that my work — and the work of the other women in this image, not to mention the work of the countless other Black women, Black men and our allies — makes and preserves space for the fundamental premise that #blacklivesmatter in our individual and collective endeavors. That’s my — or maybe our — memorial to the nine precious lives lost on June 17, 2015. May they rest in peace.