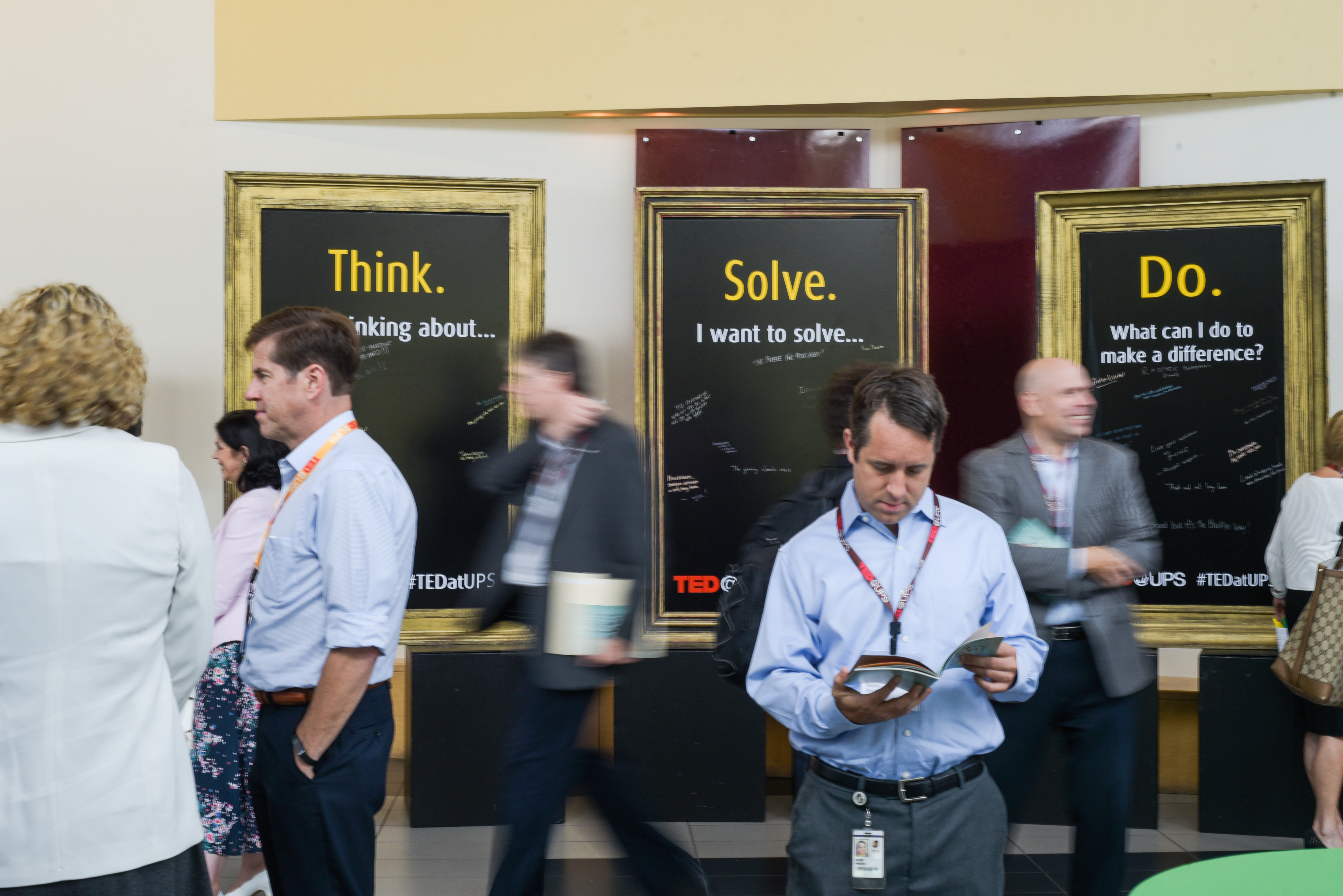 At TED@UPS, speakers from all parts of the company — from delivery drivers to marketing executives — shared ideas on pushing through challenges. Photo: Mark Tioxon/TED

How exactly do you ship fragile dinosaur bones? Or move a 12.5-ton locomotive through the air? And what are all the little things that have to happen to get relief supplies delivered when and where they’re needed?

Employees at UPS think about these kinds of challenges all the time. It’s why the theme, “Think. Solve, Do.,” just made sense for the first TED@UPS, held on September 2, 2015, at the Porter Sanford III Performing Arts Center in Decatur, Georgia. In two sessions of talks hosted by Kelly Stoetzel and curated by Bryn Freedman, 16 speakers — all but one from within the company — shared ideas on logistics, yes, but also on life. The thread that wove through all the talks: the importance of pushing forward through obstacles.

Great moments from the talks in Session 1:

“Over 98% of exporters are small- and medium-sized businesses. … The borders that they have a hard time crossing are the ones they establish for themselves.”

—Scott Szwast is a marketing director for UPS and works with companies as they expand into international markets. While it takes work to understand selling on the international scale, he says it’s actually far riskier for small companies to stay domestic out of fear.
.

“When most people talk about global hunger, they think the problem is that there isn’t enough food in the world. The problem isn’t the lack of food. … Hunger is a logistics problem.”

—Esther Ndichu helps UPS respond to disasters and humanitarian crises. She says that by looking at different parts of the supply chain — at things like packaging, warehouse conditions and road networks — we can make big strides in feeding those who are hungry.
.

“Nothing worthwhile, personally or professionally, ever seems to happen without trouble. It’s like the gatekeeper between where we are and where we want to be.”

—Mark Modesti works in sales, and describes his goal as “looking for trouble.” He points to the now-classic example of the demise of Blockbuster and rise of Netflix to show why businesses need to be willing to adapt.
.

“Engineering is exactly the same thing as cooking. … To  create entirely new products — all you need is the right ingredients.”

—Joachim Horn created SAMs, tiny sensors and activators that are a bit like LEGOs. He demos how they make engineering easy, to create a rover that drives when someone tweets with a specific hashtag or a mailbox that sends notifications when letters are received.
.

.
“Adam took to the job like a duck to water. It’s a steep learning curve, and he picked it up quickly and he ran with it.”

—UPS driver Richard Myton on his delivery partner, Adam Richens, who has autism. The two have formed a meaningful friendship on their route.
.

“Increased access to information has changed consumer expectations forever. Today, we increasingly want what we want, when we want it, at the lowest possible cost. It’s getting as close as possible to this ideal that’s the new competitive advantage for business.”

—Alan Amling is the VP of Global Logistics and Marketing for UPS, and he thinks about how manufacturing is evolving. He notes that technology has brought a big shift in how people buy products — and that this actually brings opportunities for businesses.
.

“The uninformed call it ‘gender confusion.’ No one would choose to make such a drastic change out of confusion.”

—Kelly Lepley has chased two dreams in her life — to become a pilot and to transition to her true identity as a woman. She urges others to embrace their authentic identities, so that they won’t be ruled by fear.
.

“This next song I want to play for you is an instrumental. It’s one I wrote on my route, on my lunch break.”

—UPS driver Johnny Staats plays the mandolin and guitar, and he fronts the bluegrass band, Johnny Staats and the Delivery Boys. He performed two songs to close out the session.
.

And great moments in the talks from Session 2:

“Innovation is not a Pet Rock that needs to be sold. Nobody wants to be sold to, but everyone loves to buy. Give them something to buy.”

—Jack Levis led the development of ORION, a system that determines the most efficient delivery route for UPS drivers, taking more than 100 million miles off the road every year. He confesses that he was ridiculed at first, and he champions the idea that before a innovator does something great, he or she must be willing to look foolish.
.

“A résumé tells a story. Over the years, I’ve learned something about people whose experiences read like a patchwork quilt that makes me stop and fully consider them before tossing their résumés away. The ‘scrapper’ deserves an interview.”

—Human resources director Regina Hartley often gives candidates with unusual backgrounds the same time and energy she gives those who look perfect on paper, because it signals an ability to work through hardships. 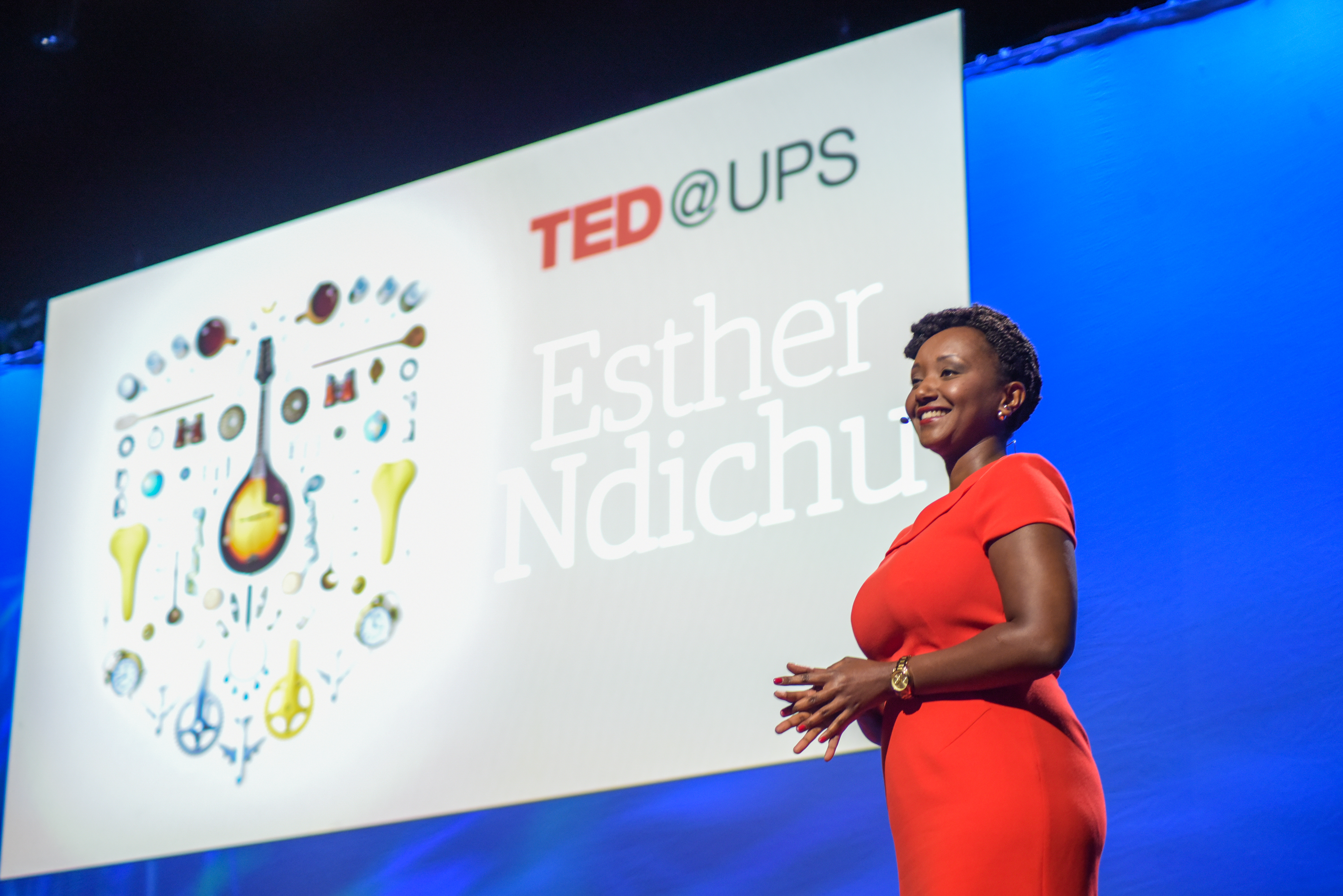 Could facial recognition software help make sure that food gets to refugees? Esther Ndichu shares how little tweaks to the food supply chain, from packaging that better keeps out water to facial recognition at refugee camps to do away with long ID lines could mean less food goes to waste. Photo: Mark Tioxon/TED

.
“I’m suggesting that there’s another resource that corporations can bring to the table — and that resource is our people and their talent, experience and passion. … I was my company’s donation.”

— Kevin Etter is a 32-year veteran of UPS, currently on loan to Gavi, the Vaccine Alliance, a nonprofit that aims to increase global access to vaccines. He shares how he became a “corporate donation,” and why other companies should lend out their employees, too.
.

“A year-long training was required. Ironically, that year only gave us more time to look over the cliff of fear. How will I get time off from my job as a pilot? How will we pay our mortgage? Will we lose relationships with our friends and family?”

— UPS pilot Jared Hill shares the questions that ran through his mind as he and his wife considered moving to Uganda to teach for Restoration Gateway. What they got from doing it? “A richness to life we had no idea existed.”
.

“I had gotten myself into a complicated relationship with stress. How many of you have dated stress? Yeah, stress gets around.”

— Yami Joshi turned to classical Indian dance when she found herself stressed out while working at UPS and attending grad school at the same time. With beautiful flicks of the arm and bends of the body, she performed a piece with her troupe, Pulse.
.

“It would appear that our nasty, smelly organic waste is perhaps not quite so useless after all.”

— Peter Harris, Europe Sustainability Director for UPS, looks for ways to turn societal challenges, like climate change, into opportunities. He presents his plan to use the methane gas produced by organic waste as a renewable resource — creating a closed-loop, circular economy that powers the world along the way.
.

“I was a 26-year-old, save-the-world foreign service officer. … Stepping off the plane in Kigali, Rwanda, that summer, I never could have imagined that rather than helping to implement a peace, I’d actually become a first-hand witness to genocide.”

— Laura Lane narrates the story of how, at the start of the Rwandan Genocide in 1994, she helped 267 Americans escape. To do this, she had to improvise a course of action and stand up to an armed military officer … while wearing sweatpants and a Mickey Mouse t-shirt. Now the President of Global Public Affairs at UPS, she uses the story to highlight why it’s not enough to simply follow orders. 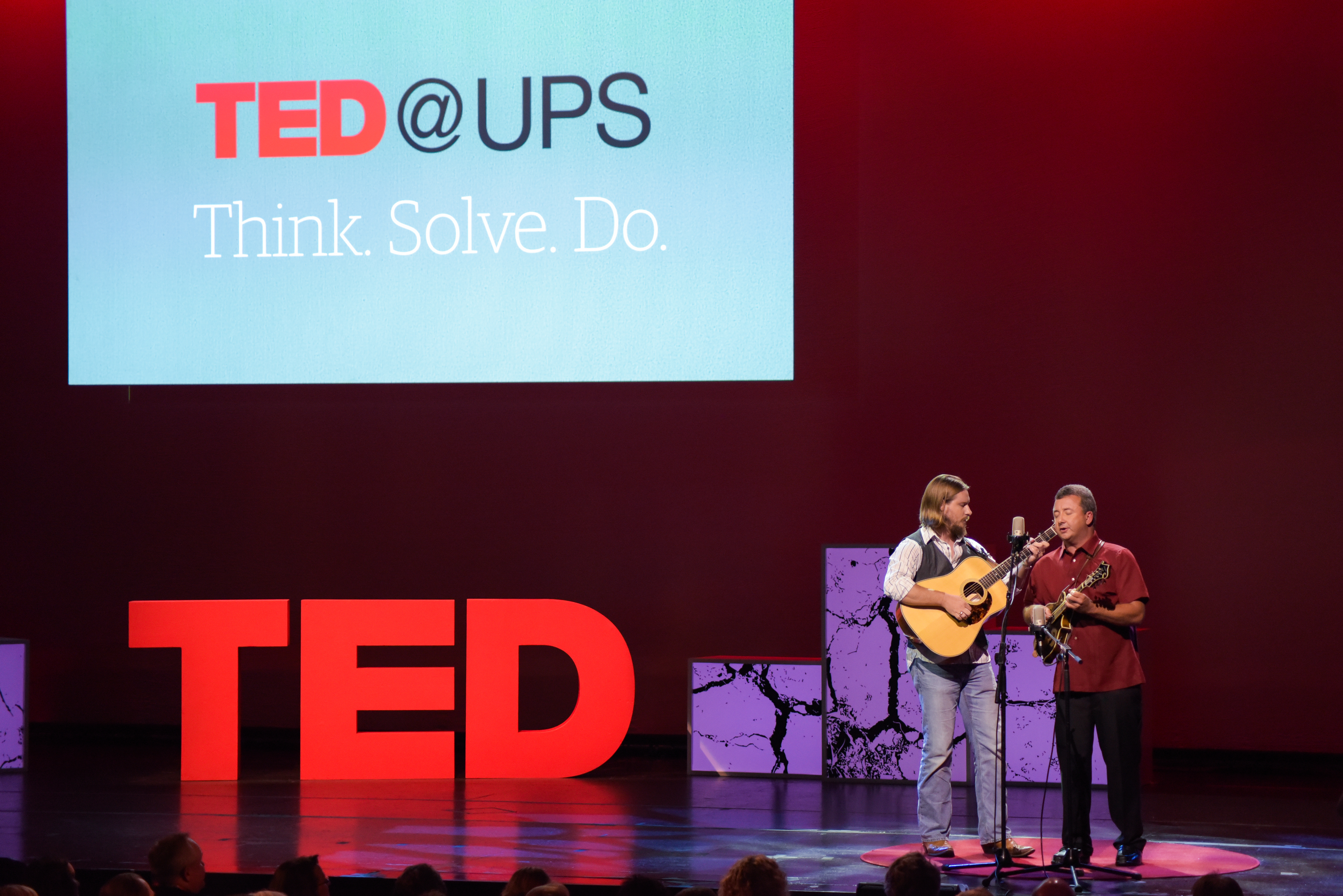 Johnny Staats is a UPS driver, who writes bluegrass songs on his breaks. He performed in Session 1 and 2 of TED@UPS with members of his band, Johnny Staats and the Delivery Boys. Photo: Mark Tioxon/TED