For the 50,000 people of the Faroe Islands, a self-governing country within the Kingdom of Denmark, hunting long-finned pilot whales — a dark gray species found in their waters — is a tradition that stretches back centuries. These whales are a food source, and hunting them is considered an important part of Faroese culture. Today, the hunt, known as the “grind” (which rhymes with “wind” and is also the Faroese word for “pilot whale”), is highly controversial and divisive, despite the fact that the whales are not endangered.

Last year, photojournalist and TED Fellow Ed Ou and his filmmaking partner Elise Coker traveled to the Faroe Islands to make a documentary for VICE, The Grind, about a standoff between the Faroese and the marine conservation society Sea Shepherd. For this doc — which you can watch above (warning: it does contain graphic images) — they filmed interviews with both the Faroese people and the activists who came to stop them, including Sea Shepherd supporter Pamela Anderson. In the process, they captured footage of the hunt itself.

We asked Ou and Coker to tell us more.

The Faroese hunt these whales for food — but to be clear, are whales still necessary for their diet?

There’s almost no native agriculture in the Faroes, and whales historically have been a staple of sustenance for the Faroese. They’ve survived into the modern day by fishing — including hunting whales — and raising sheep. Now, of course, the Faroese import goods from around the world. It’s true that if the grind were to stop today, the Faroese would not starve — but that is assuming nothing will ever interfere with global trade and a steady influx of shipments.

Those who oppose the grind often say the Faroese don’t need whale when they have access to resources from the rest of the world, but this suggestion that the Faroese should exclusively rely on outside sustenance strikes many as unfair and even somewhat ironic in light of the urban movement to eat local foods.

The Faroese maintain that self-sufficiency is of utmost importance to them, and were it not for whales — a free, noncommercial, locally hunted food — they’d be significantly more dependent on imports. Plus, they question whether it’s better — both from humane and environmental perspectives — to import a pig from a farm somewhere in mainland Europe, rather than hunt a whale that swims by the islands. The other thing to note is that even when they are not hunting whales, their entire export industry is based on fishing and the resources of the sea. 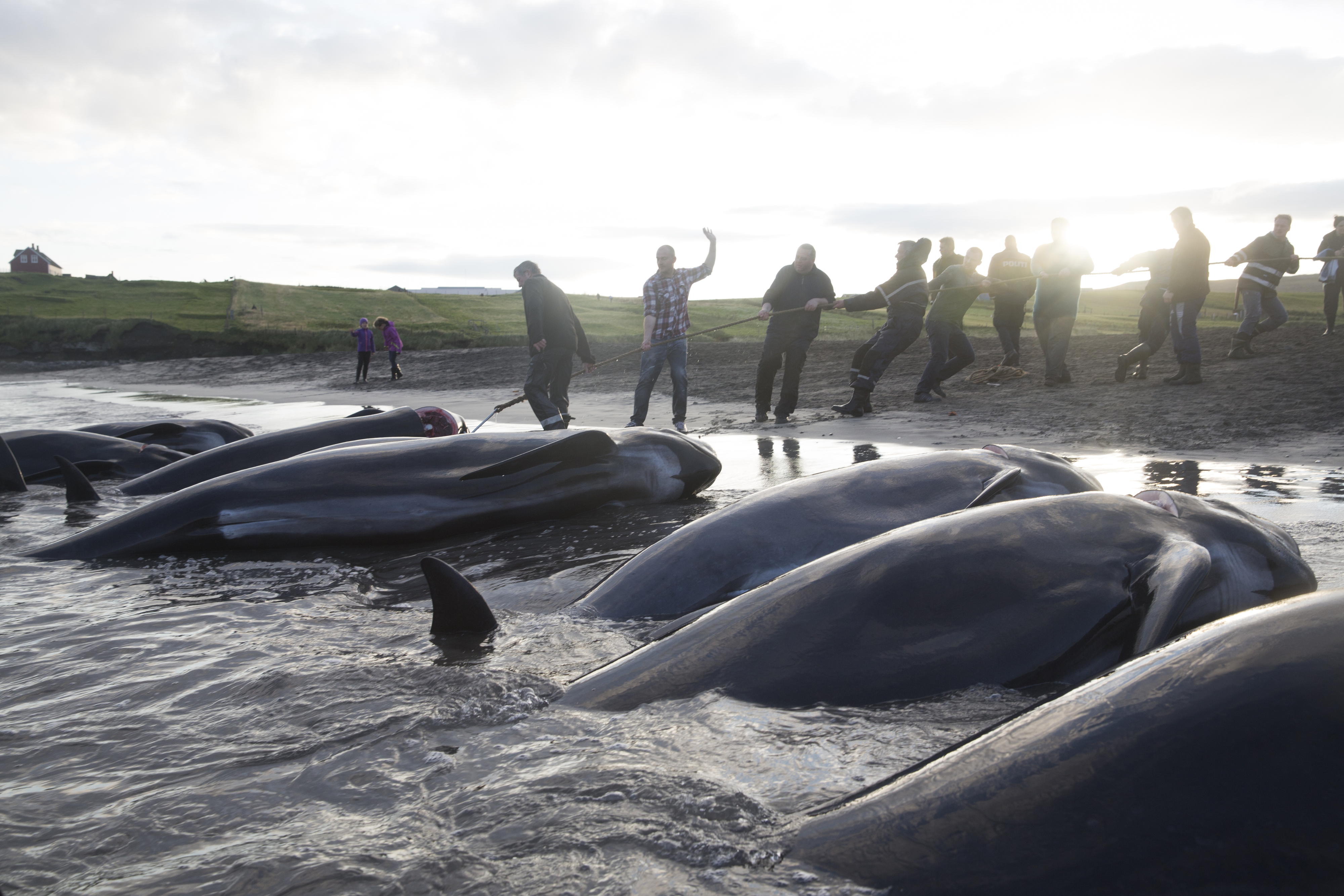 Men drag dead pilot whales onto the beach during a hunt in Sandur, Faroe Islands on August 30, 2014. The tradition has endured for nearly 1,000 years. The grind usually occurs in the summer, but there is no set date or even a set season. A grind can happen at any moment. When a pod is spotted, everyone drops what they’re doing to participate in the hunt. Photo: Ed Ou/Reportage: Getty Images 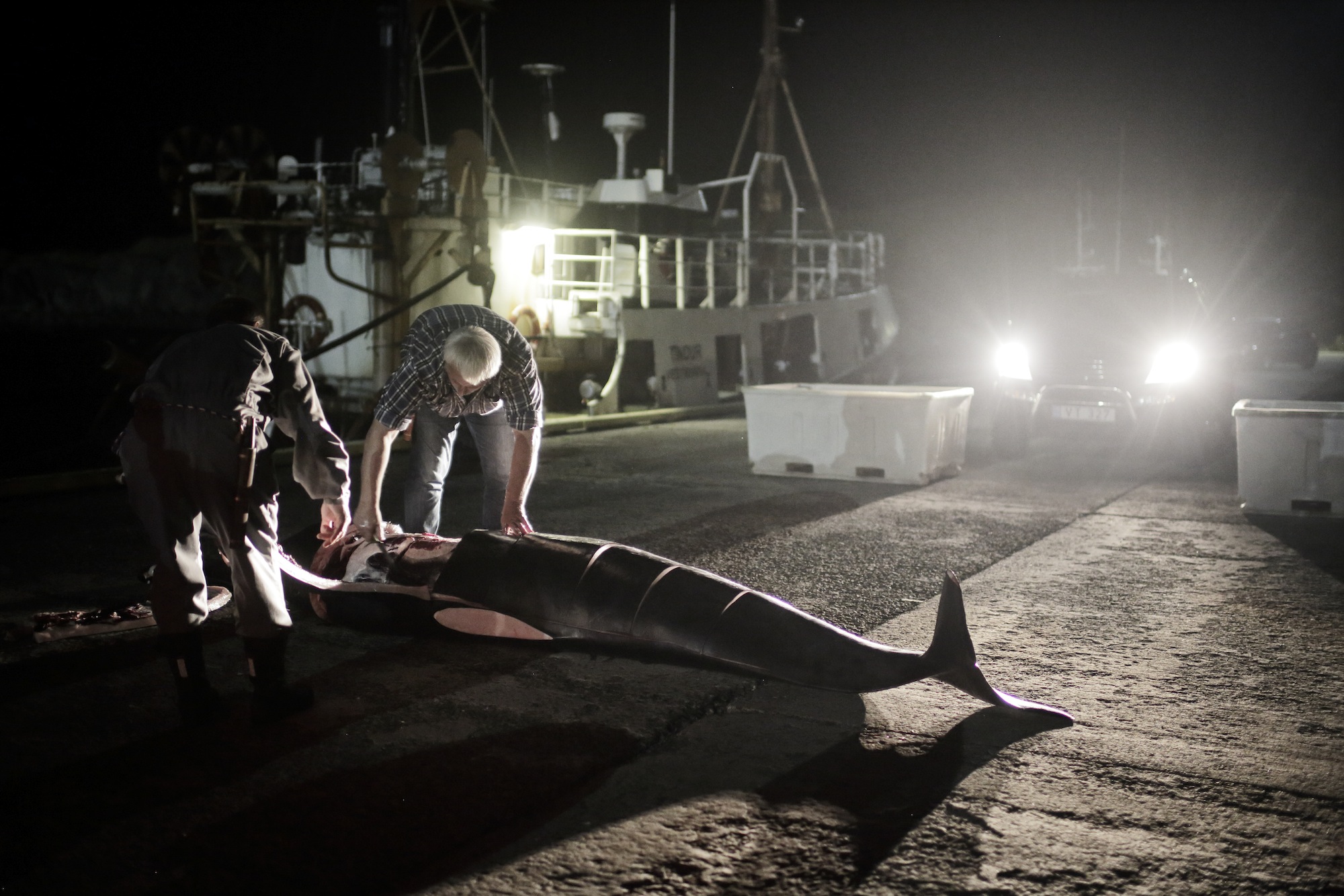 Men harvest the meat of a pilot whale after the hunt in Sandur. The hunt has always been noncommercial — the meat is shared among the community. Photo: Ed Ou

Why do you think this has gotten so much attention? Do you think Sea Shepherd would respond differently had the hunters involved been indigenous? Is there an assumption that if people look European, they have access to other food?

Simply put, the whale hunt is bloody. It takes place out in the open, and whales have a certain special status in people’s hearts and imaginations. The Faroese will argue that whale hunting and the act of killing for food is no worse than eating beef, chicken or pork. In fact, they go on to say that whales that are hunted have lived full lives out in the ocean, whereas factory farming of chicken or cows is crueler and worse for the environment.

It’s hard to say how the ethnicity of the Faroese plays into this. Sea Shepherd does have campaigns against non-European indigenous cultures. I think the main difference is that the Faroese have not experienced colonialism, while other cultures often taking the brunt of similar activism have a far more traumatized history of outsiders imposing alien standards upon their ways of life. As a result, the Faroese have a lot of unabashed pride, and defend their culture — more so, perhaps, than cultures that have been systematically oppressed over time.

Why do you think activists have focused on this rather than on trying to stop industrial meat production?

Sea Shepherd does have campaigns to stop industrial fishing and whaling in other parts of the world. To be clear, we don’t think the instinct to want to save whales and conserve marine wildlife is incorrect at all. This specific campaign in the Faroe Islands is a very visual and accessible one for Sea Shepherd to rally around. As volunteers told us, this is a specific, small and relatively easy thing to stop. One can easily imagine getting physically between a small group of hunters and the whales. Responsibility for the larger problems that plague the oceans is so diffuse and far-flung that the acute focus of a mission like this in the Faroes is appealing to those who want to feel like they are making an immediate and visceral difference. 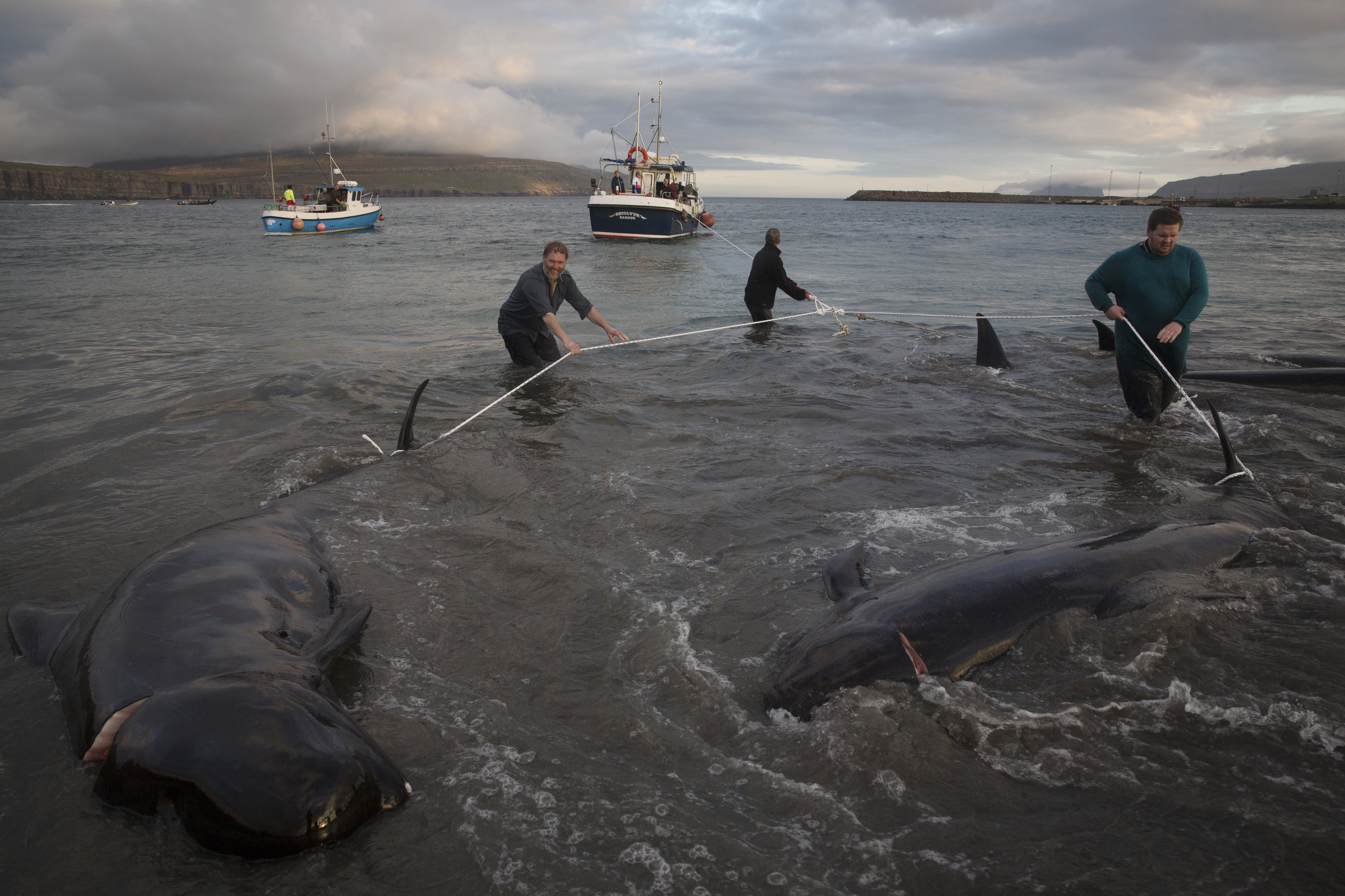 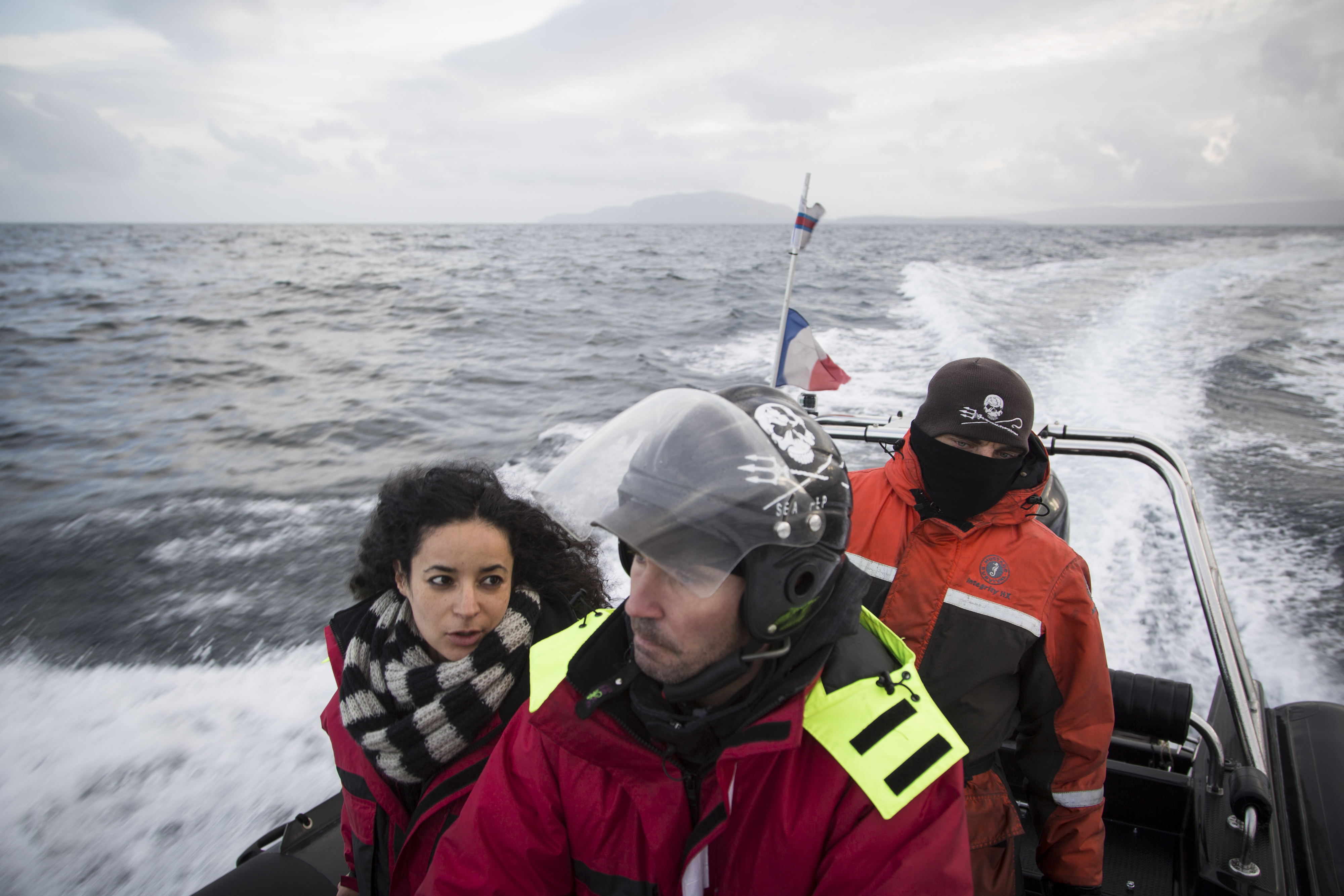 Members of the Sea Shepherd boat crew, including Lamya Essemlali (left), patrol the waters for whales surrounding the Faroe Islands on September 22, 2014. In 2014, hundreds of volunteers from Sea Shepherd descended on the Faroe Islands to interfere with the whale hunt, which they say is barbaric and unnecessary. Photo: Ed Ou/Reportage: Getty Images

Ed, why the interest in this story in the north? Is it because you grew up in Canada? The Faroes seem as far as you can get from your body of work from the Middle East.

I’m interested in untold stories and giving a voice to underrepresented communities — wherever they happen to be in the world. Even when I work on news-related stories in the Middle East, I try as much as I can to step back, really consider what is being overlooked — what stories are being neglected — and focus on those angles.

I’ve been working in the Canadian Arctic looking at the Inuit and the rough transition from the nomadic and subsistence way of life to the modern, settled lifestyle that has been imposed on the culture — with often tragic results. Through my work there, I’ve become interested more generally in how traditional ways of living often came under attack, ironically, by liberal environmental groups who seem to hold a double standard when it comes to the well-being of animals versus the people who rely on them for survival.

I’m focusing on the Arctic because I feel like there is so much geopolitical attention in the north in regards to sovereignty, rights to resources and global warming. But none of that political discourse considers the indigenous communities who live there and are affected directly by political systems that have little regard for their well-being.

What’s been the response to the documentary — from the Faroese, Sea Shepherd and the general public?

The general public has said that our documentary opened their eyes to the reality of the situation beyond what they’ve seen on social media or in somewhat sensationalized articles.


Though many associated with Sea Shepherd have praised our comprehensive approach in telling this story, some criticized what was referred to as us “being seduced by the myth” of a Faroese lifestyle that they don’t believe justifies the whale hunt. Some don’t believe this lifestyle exists. Our aim was never to justify, but rather to allow our subjects to put forth their perspectives and give depth to an issue often shown through only one lens.

There’s a knee-jerk reaction in Western culture to automatically condemn killing whales, so to take the concept of a hunt like this and contextualize it in a way that creates a more nuanced portrayal inevitably presents a challenge with viewers harboring a strong bias. Judging by the response, many seem to now recognize that the issue is more complicated than a one-sided narrative. The Faroese appreciate that we gave them that voice. 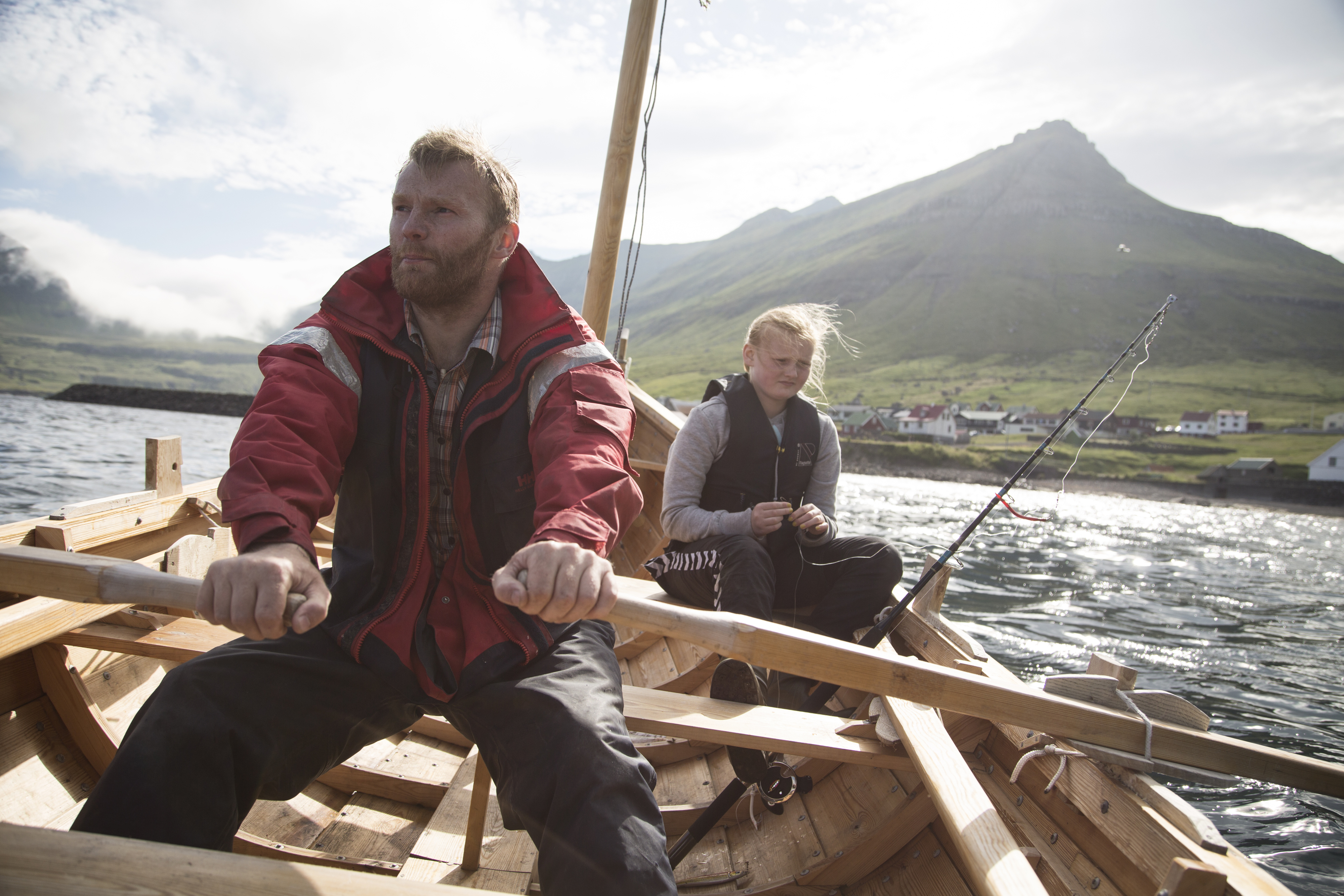 Martin Fløghamri fishes with his daughter in their hometown of Oyndarfjørður, Faroe Islands on July 23, 2014. Photo: Ed Ou 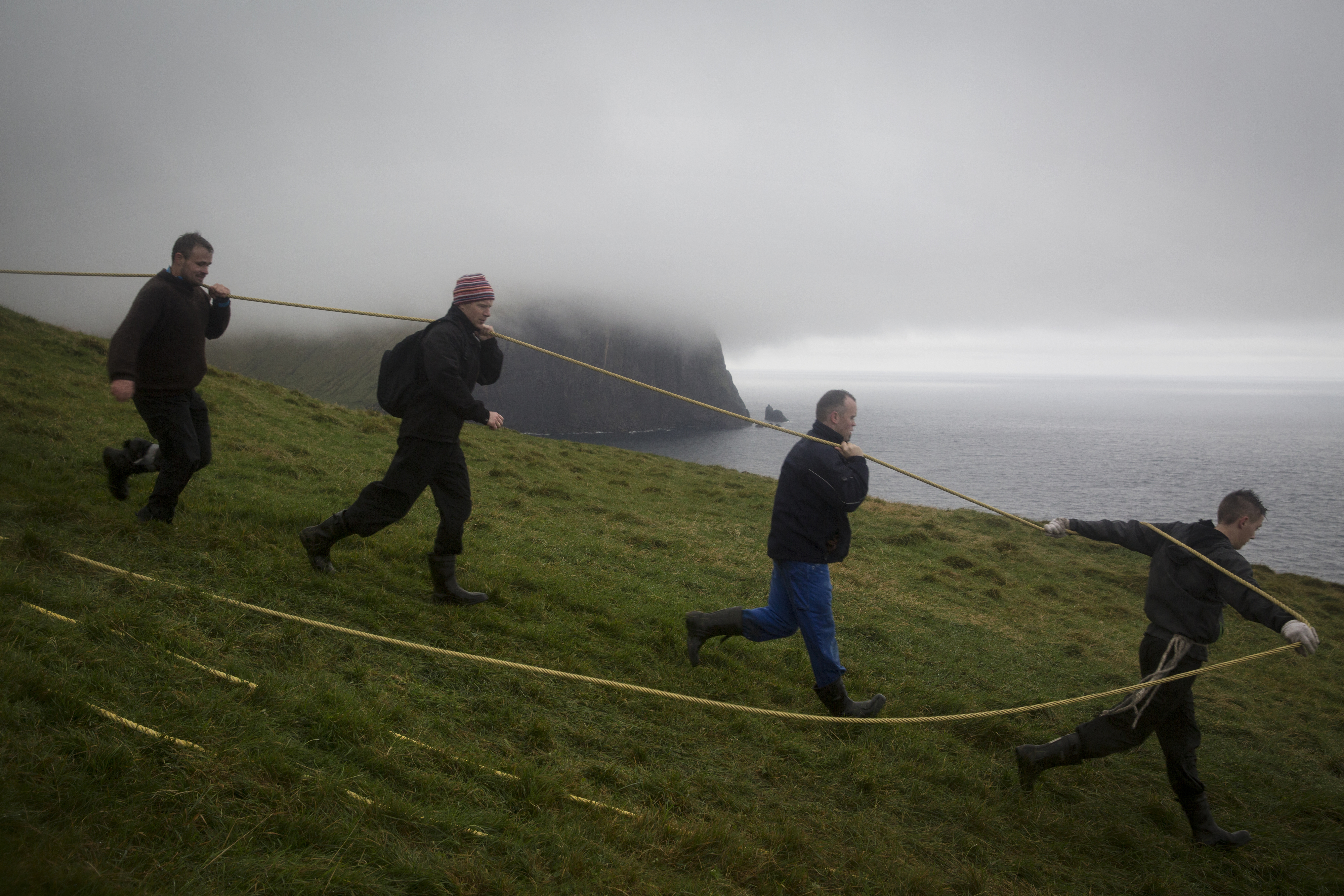 Shepherds use a rope to pull a cart across a cliff in Tjørnuvík, Faroe Islands, on September 20, 2014. At the end of every summer, residents of Tjørnuvík visit a remote island nearby to gather sheep for the annual slaughter. Photo: Ed Ou/Reportage: Getty Images

How do you feel about the grind? Did your perceptions change as you spent time with the Faroese?

People see these graphic images on the Internet of the whale hunts, and write off the entire country and culture based on one singular act. With any story we do, it is important as journalists to go beyond the obvious and really dig deep into a culture. Going into this story, we knew that it would be emotionally charged — people will likely watch our piece with very strong and set opinions going in.

As journalists, we don’t shy away from controversial topics, but it’s our job to give context and present a fair and balanced portrayal of both sides of an issue. In order to tell the story, our role is to truly understand where people are coming from on issues they feel passionate about; whether that be the Faroese hunters or anti-whaling activists. We let people’s actions and words speak for themselves. Our goal is to give people an informed understanding of a topic so that they can come to their own conclusions.

What’s next for you, Ed?

TED Fellow Kitra Cahana and I are in the middle of working on two documentary projects. The first, which we are currently editing, takes place against the backdrop of one of the most divided places in the Middle East. It is a love story between two people who are determined to be together despite their worlds keeping them apart. We have been following this story for the last three years.

The second one continues my interest in the Arctic. We are shooting a documentary looking at the Inuit relationship to polar bear hunting, and putting that in context with the traumatic post-colonial experience in the Canadian north. This past year, we embedded ourselves in northern Inuit communities. We are trying to paint a portrait of life in the Arctic. We’re independently self-funding this documentary in hopes of turning it into a feature-length film.