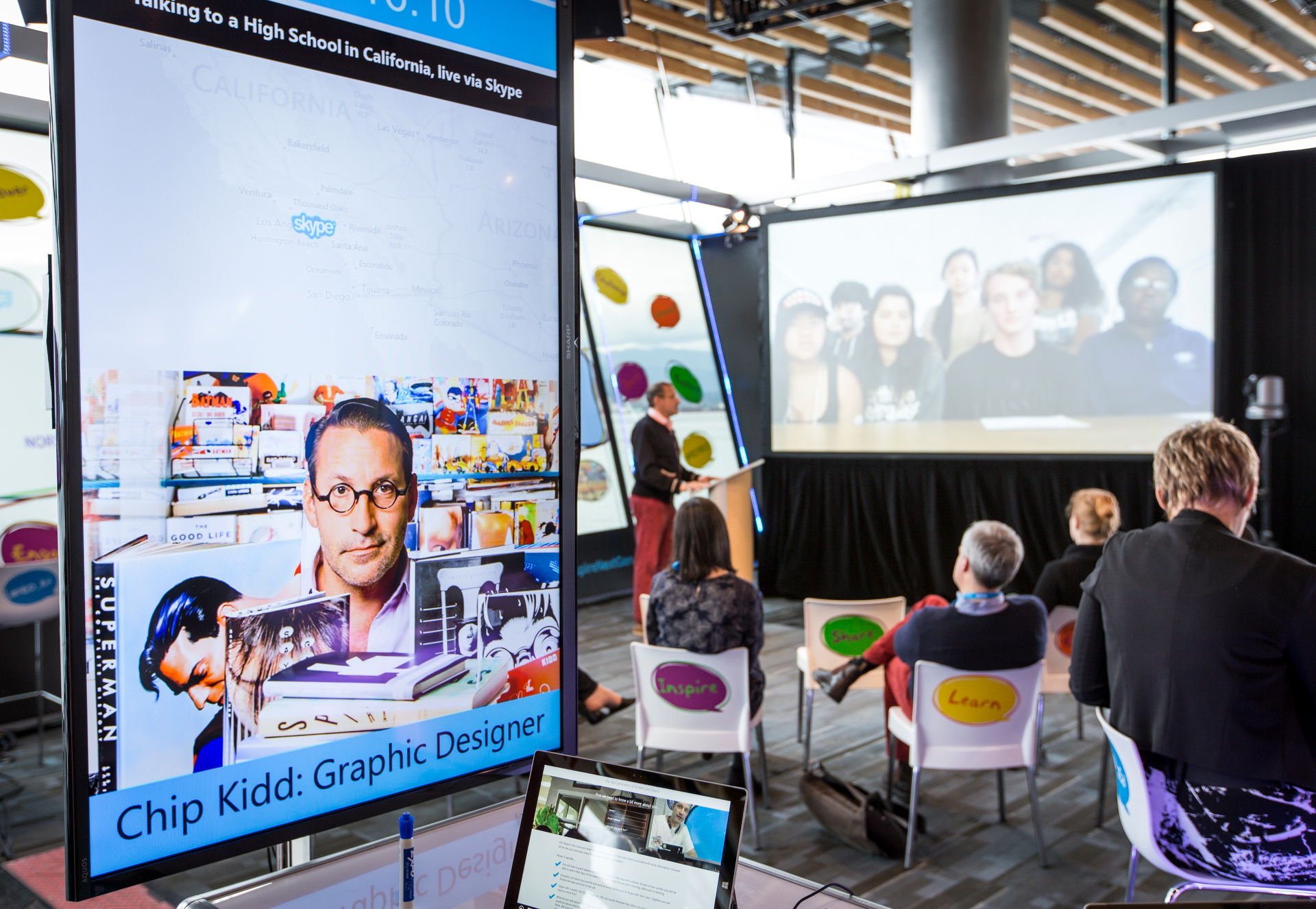 Chip Kidd chats with a classroom of students in Australia thanks to the magic of Skype in the Classroom. Photo: Ryan Lash/TED

Tucked into the northeast corner of the Vancouver Convention Centre, a podium was set up for the duration of TED2015. A small camera captured what happened behind it, with a panorama of Vancouver’s mountains and harbor in the distance, complete with sea planes skimming across the water.

From this vantage point, classrooms around the world Skyped in to TED2015 for meet-and-greets with both new and veteran TED speakers. Second graders, middle schoolers and students applying to college came in early or stayed late after school for these Skype in the Classroom sessions, which gave the opportunity for them to ask speakers like Mark Ronson and Dan Pallotta about their personal experiences. One elementary schooler even made a very serious request to Sylvia Earle for permission to drive her submarine.

One of our favorite TED speakers, book jacket designer, Chip Kidd, spoke with a classroom in California along with one of TED’s in-house designers, Celia Berger. They had some smart tips for budding writers and designers that we thought were too good not to share.

Write every day.  “Force yourself to write something every day,” Kidd commands the students. “Some days it’ll be like, ‘Aww, I don’t want to write anything.’ But, if you do, and you get some discipline, I guarantee it will not be a waste of your time.”

Write for you. Yes, Instagram can send your sketches across the globe instantly, but Kidd suggests designers start out by thinking close to home. “You don’t have to worry about the whole world seeing what you’re working on,” he says. “It can be just for you. I know really great artists, cartoonists, writers who keep journals that are just for themselves. It’s not for the rest of the world.”

Trust your intuition. How to turn a concept into a visual image? “It’s something that you can’t explain, and it comes with life experience,” Kidd told the group. “My responsibility is to combine the way something looks with what it says and the meaning it tries to convey to you.” When Kidd is drafting jacket designs for a new book, he thinks, “If I didn’t know anything about this particular book, and I saw this cover, how would I perceive it? What would make me want to pick up that book and read it?”

Graphic design is a career for a generalist. “Get an education about everything,” Kidd advises a student asking about college degrees. “When I was in high school, I didn’t know what graphic design was, but I knew that I liked album covers; advertisements; combinations of images and words. That’s what graphic design is.” How to best prep for a career in graphic design? “It’s important to take all courses, not just art but science and philosophy. More knowledge is better than less.” TED’s graphic designer, Celia Berger, adds, “Math is really important for graphic design. For example, you have an 8.5-by-11 sheet of paper and you need to figure out how to divide it into three or accommodate folds in the paper. Even more so in web design. There are pixels, points, padding, size for fonts.”

Embrace tech. Technology is TED’s first name, so no wonder Berger is a proponent when mapping out a career in design. It’s a window onto myriad creative endeavors, so study up. “Technology is a good way to get into anything creative that you want to do,” she says.

Keep it simple. Graphic design is for the big-picture concept, for paring down a complicated idea into a simple image. Good graphic design is about clarity and simplicity, says Berger. “You want to get the message across without thinking about the design. It should be easy to grasp.”

In addition to being a TED speaker, Kidd has also designed jackets for the TED Books series — a task he describes as akin to designing an image for a TED Talk. Will he tell us which is his favorite cover? Well, Kidd doesn’t play favorites, but he does note with a wink that his own TED Book will be out in June.