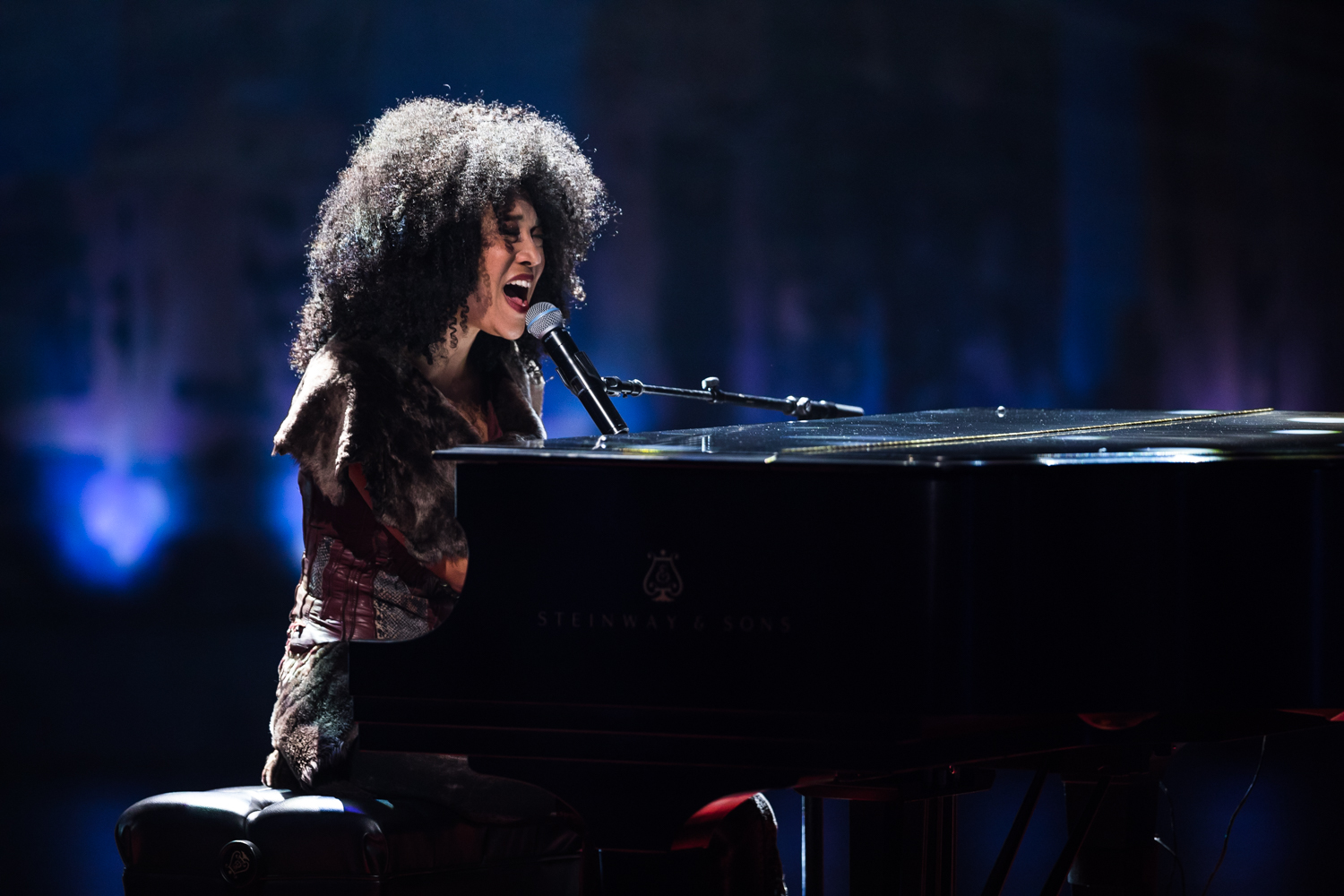 There’s a theme of Bridges that plays through this conference — and one of the things we sometimes need to do with bridges is burn them, to move forward with no option of going backward in time or space. In this session, hosted by documentary film aficionado Jess Search, we listen to hard truths about taking the steps we need to take — without looking back. 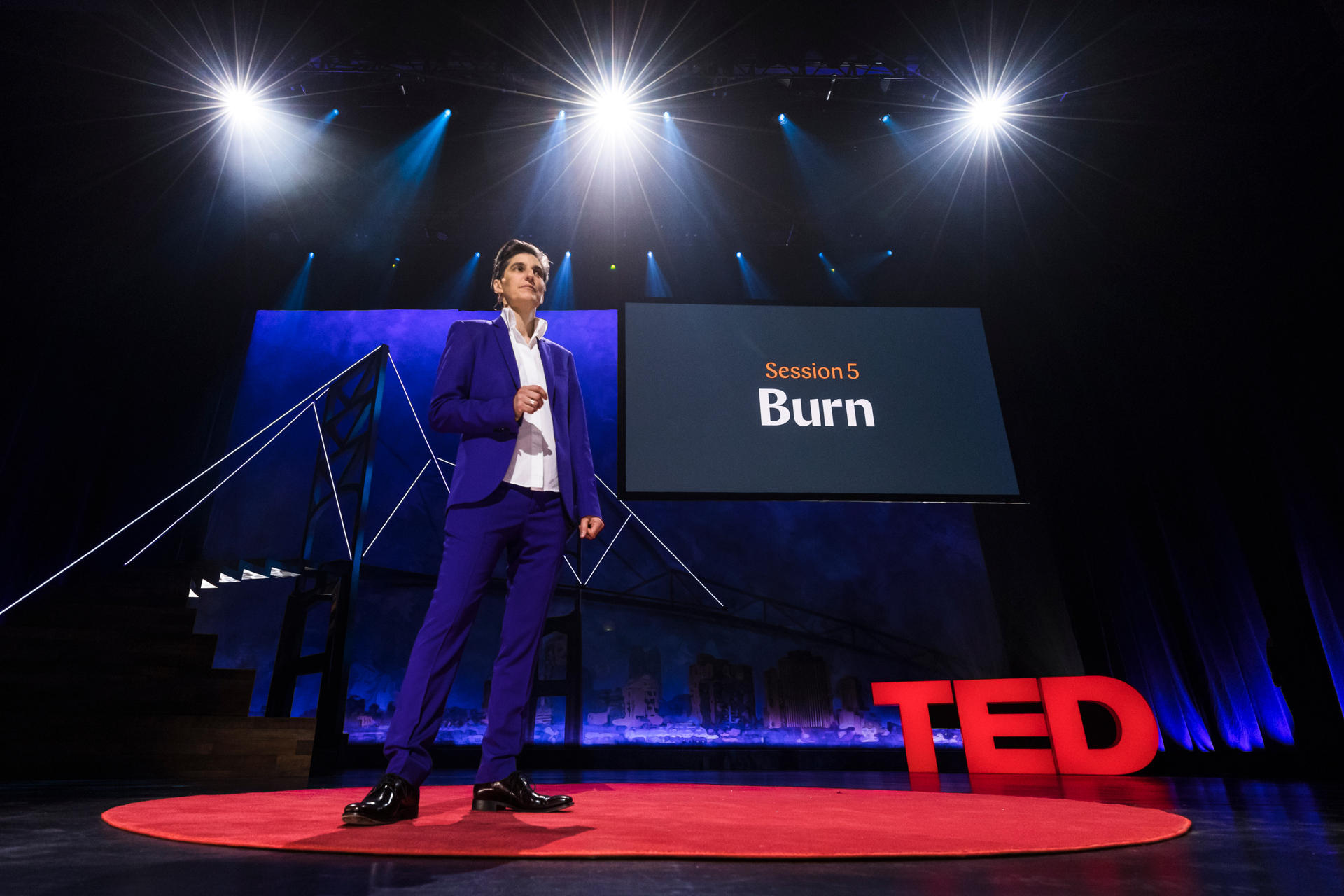 In her day job, Jess Search supports documentary filmmakers as head of the Doc Society. She brings that same curious eye to her job this week: hosting Thursday evening’s session of TEDWomen 2017. Photo: Ryan Lash / TED

A strange and bitter crop. The session begins with Judith Hill’s richly textured performance of “Strange Fruit,” a protest song made famous by Billie Holliday. Contrasting traditional Deep South imagery of magnolia blossoms and gentle breezes with the brutal legacy of lynching, the lyrics drive home the still-unexamined history of racial terrorism in the 20th-century American South: “Southern trees bear strange fruit / Blood on the leaves and blood at the root / Black bodies swinging in the southern breeze / Strange fruit hanging from the poplar trees.” 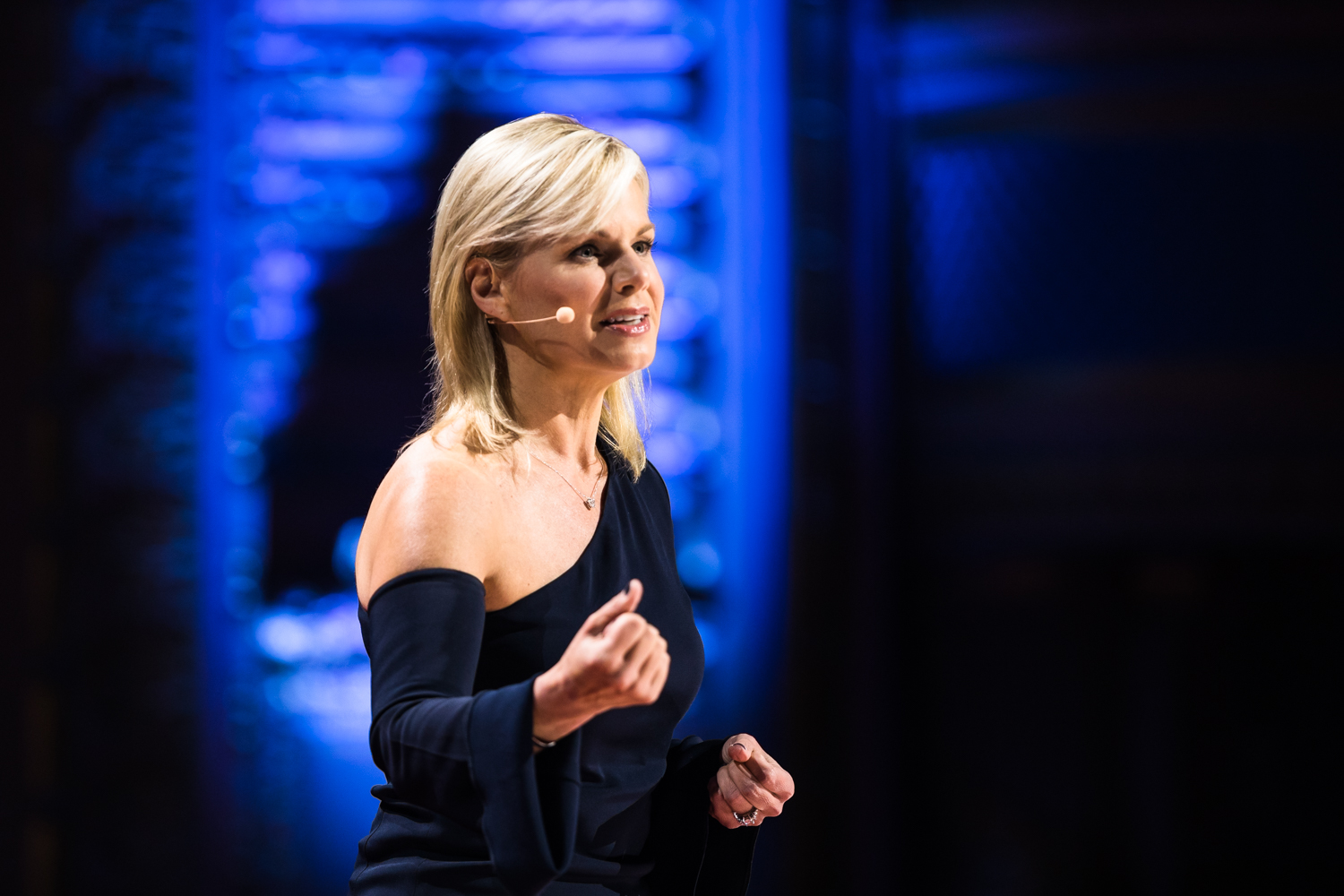 When Gretchen Carlson reported her own sexual harassment at work, it sparked an outpouring of thousands of women’s stories — and inspired her to speak up even more to create safer places to work. She speaks at TEDWomen 2017 in New Orleans. Photo: Stacie McChesney / TED

We have to be fierce. Gretchen Carlson is a veteran TV journalist and host who won the title of Miss America in the late ’80s, representing her home state with a smile and a plan to land a dream job in media. But again and again in her year wearing the crown, this young woman encountered men who pushed unwanted sexual advances on her: the TV executive who stuck his tongue down her throat; the LA publicist who grabbed her by the neck in a car backseat. “Only recently did I realize these incidents weren’t just harassment – they were assault,” she says now. “But like so many survivors, I thought: ‘I’ve got this. I’m okay. Just move on, Gretchen.'” Fast-forward to 2016, when her story of workplace harassment at Fox News broke. It was one of the scariest days of her life — but it also brought an outpouring of women’s stories, a flood of honesty that inspired her to do more and has led to her new book. Onstage, she lays out three things we can all do to create safer places to work — from acting as allies to fighting against binding arbitration clauses in workplace contracts. Because here’s the breaking news, “the untold, shocking truth about women and sexual harassment: Women want to work in a safe, welcoming and harassment-free environment,” she says. A pause. “That’s it.” 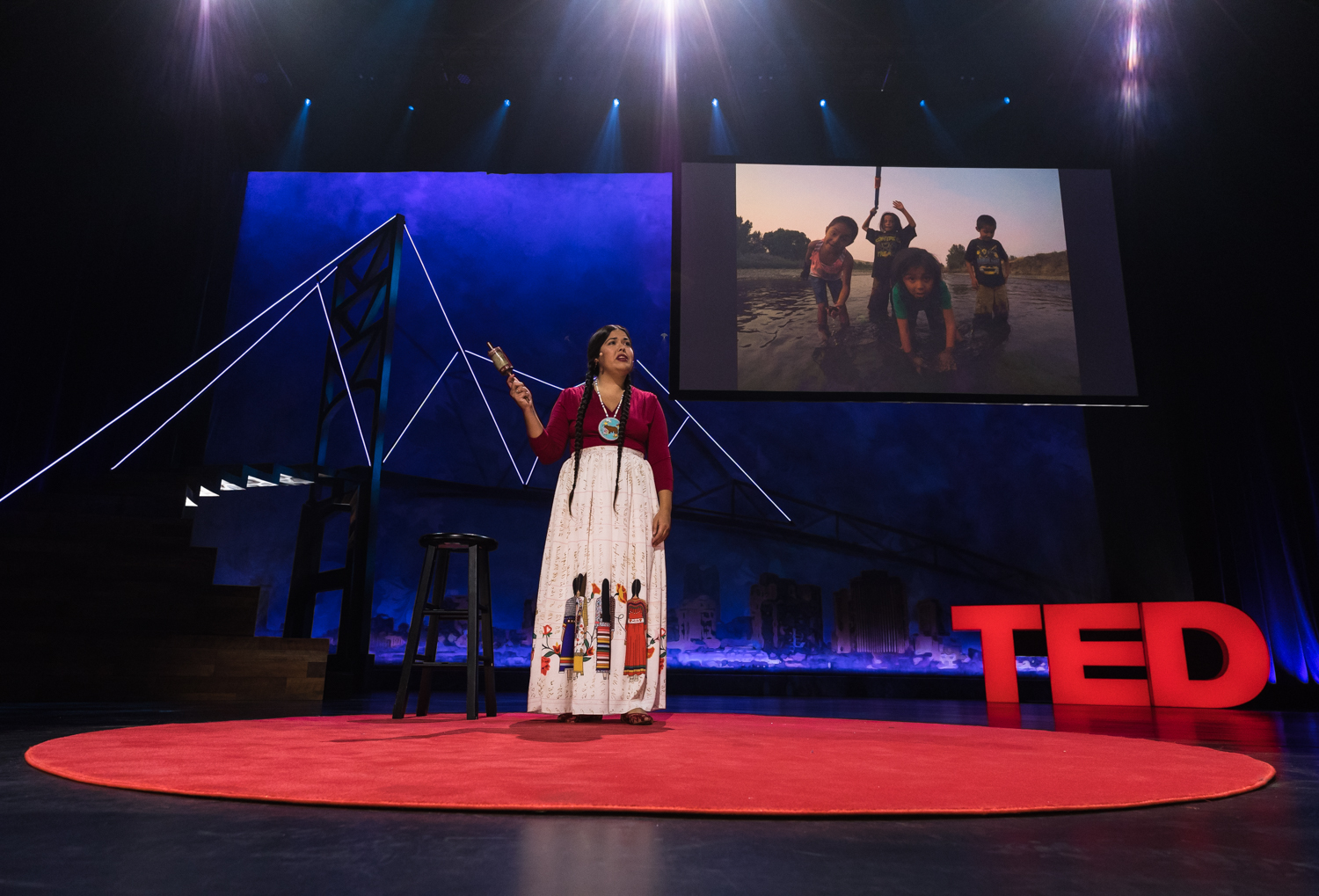 Tribal attorney Tara Houska holds a piece of her cultural history — a rattle used in sacred ceremonies — while talking about the kids in the slide behind her, the Native American kids who are one of the fastest-growing new demographics in the US. Can we make life better for these kids? She speaks at TEDWomen 2017 in New Orleans. Photo: Ryan Lash / TED

We are resilient. We are fierce. We are still here. “When you aren’t viewed as real people, it’s a lot easier to run over your rights,” says tribal attorney Tara Houska. As part of the bear clan from Couchiching First Nation in International Falls, Minnesota, she’s watched and experienced countless attempts to eradicate the legitimacy of her land, her people and her culture — the most recent instance being the months-long standoff at Standing Rock that resonated and rallied thousands around the world. Through systemic ignorance, violence, genocide and disregard of treaty agreements — often by governments themselves — native peoples are constantly fighting an uphill battle for fundamental rights. So let’s start addressing that ignorance, Houska suggests. Currently, there are 567 federally recognized tribes in the US alone, yet only half of all US schools mention more than a single tribe in textbooks. Education is fundamental, she says: “Change the narrative and grow. Empathize. Support. Remember we are as human beings living on this earth together.” 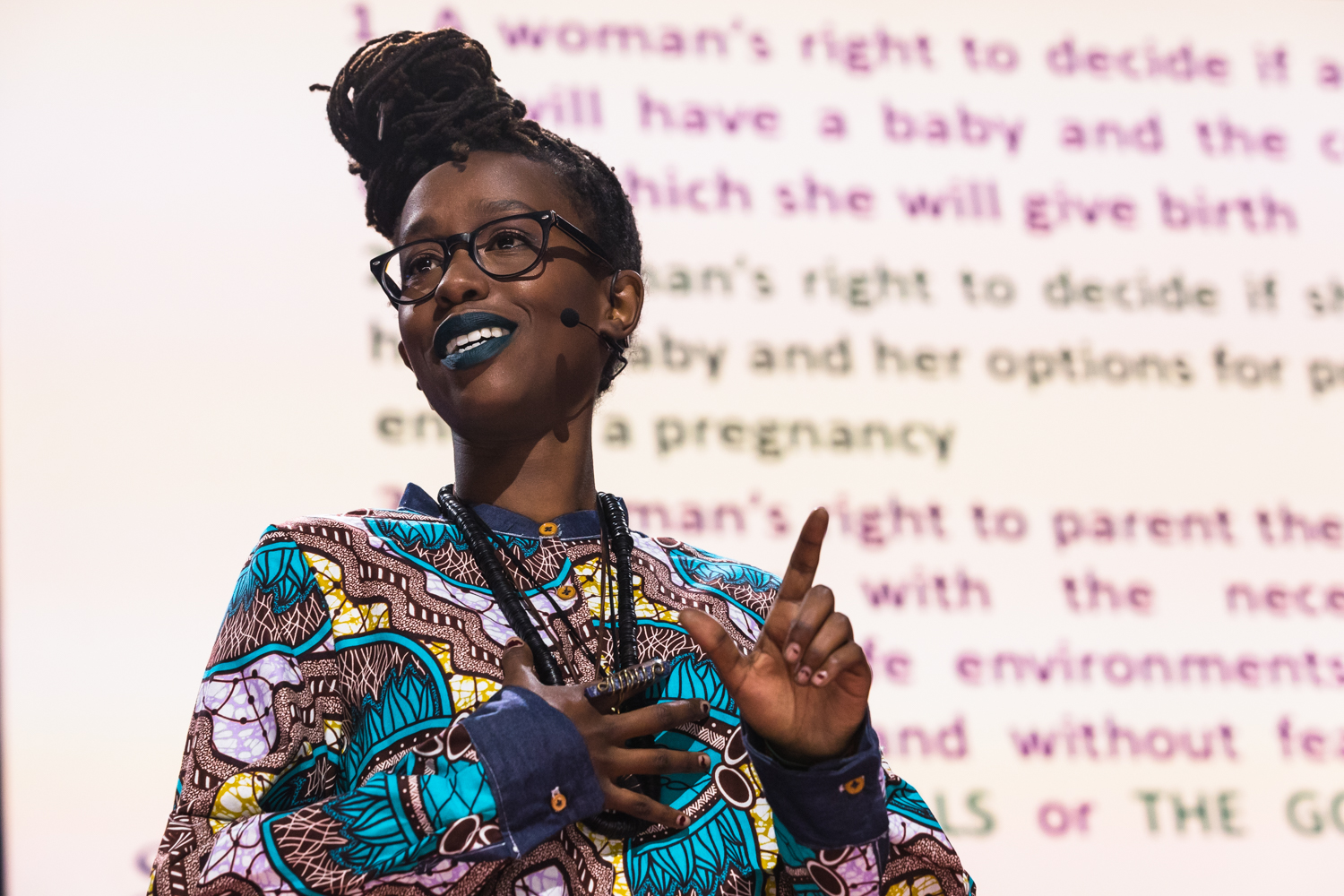 Mwende “FreeQuency” Katwiwa blends a poem about reproductive justice with a thoughtful discussion of Black Lives Matter — because, as she says, it is impossible to separate the two issues. She speaks at TEDWomen 2017. Photo: Ryan Lash / TED

It is the artist’s job to unearth the story that other people try to bury, says Mwende “FreeQuency” Katwiwa. In a gut-wrenching, incisive talk-plus-poetry, she considers reproductive justice in America for black mothers through a poem called “The Joys of Motherhood,” which begins: “I don’t know if I have what it takes to stomach motherhood in this country.” In a world with true reproductive justice, everyone would be able to parent in safe, socially supportive environments, in healthy communities without fear of violence. But America makes no such guarantees for black mothers and their babies. As Mwende says, “[America] has taught me how some women give birth to babies and others to suspects / has taught me that this body will birth kin who are more likely to be held in prison cells than to hold college degrees.” She continues, “there is something about being black in America that has made motherhood sound like mourning.” Mwende ends the talk with a bold call to unite the reproductive justice movement with Black Lives Matter — in fact, she says, it is impossible to separate them.

Who are we without labels? Clemantine Wamariya grew up in Kigali, Rwanda, but when she was six, she was forced to flee genocide with her sister Claire. “You go from a person who’s away from home to a person with no home,” she says. “The place that’s supposed to want you has pushed you out, and no one takes you in. You are unwanted by anyone. You are a refugee.” Eventually, Clemantine and Claire came to the United States … and in a truly American twist, they were reunited with their parents live on Oprah. But her family still rarely speaks about the past. “None of us can make sense of what happened to us,” she says. Rwanda, she reminds us, is not the only country where people have turned on each other. “In order for us to stop the violence that goes on in the world, I beg you to pause. Let’s ask ourselves, who are we without words, who are we without labels? Who are we in our breath? Who are we in our heartbeat?” 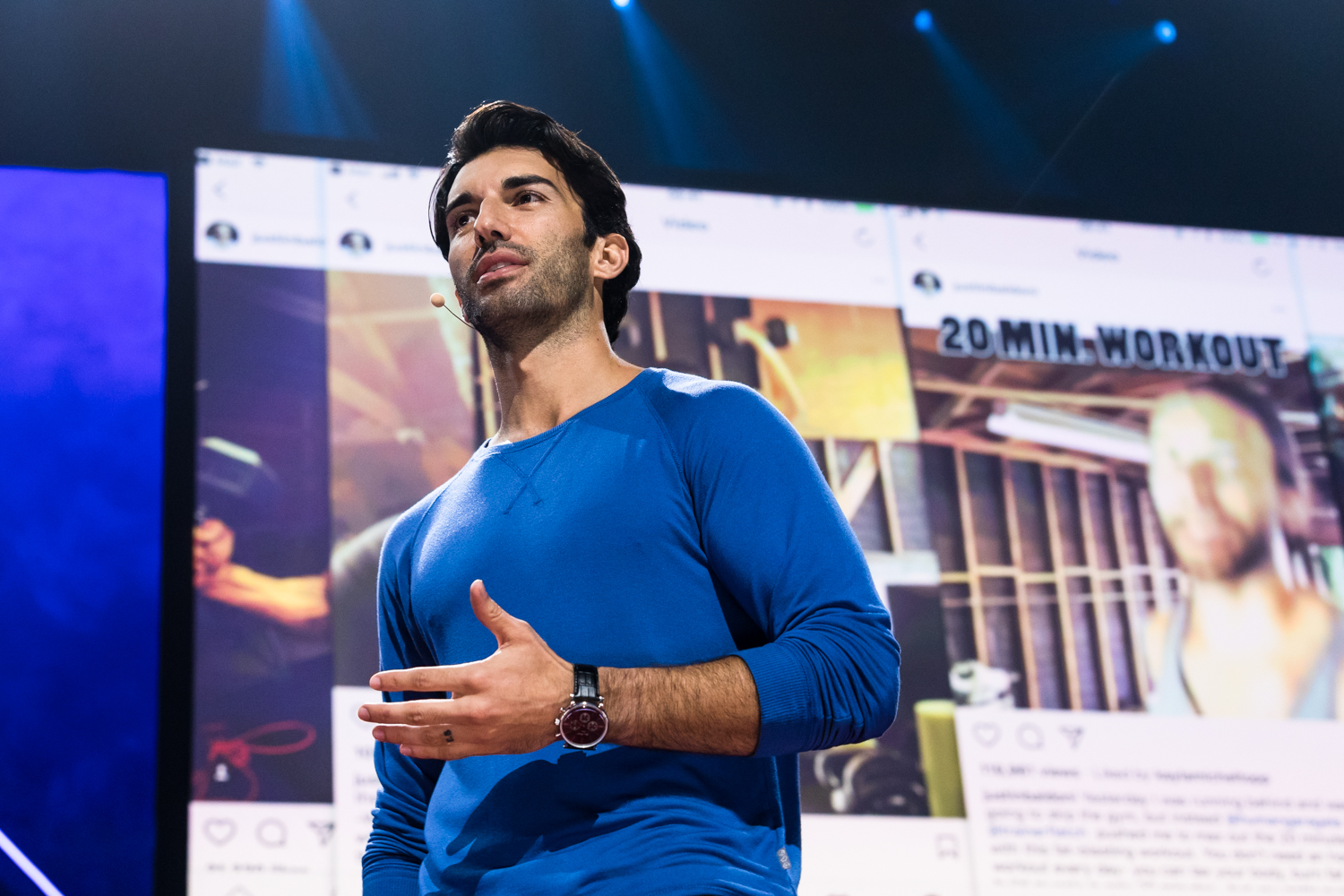 Justin Baldoni shares his adventures on Instagram, where his posts about exercise draw male fans, while his posts about loving his wife and parenting his kid speak to women. He wondered: Why is that? He speaks at TEDWomen 2017. Photo: Ryan Lash / TED

Taking the TED stage as himself, not as one of the many fictional men he has played, the actor, filmmaker, and social entrepreneur Justin Baldoni invites men to reject traditional norms of masculinity, to be accountable for and conscious of their actions — and to be vulnerable, express emotions, and disrupt the patriarchy. “I believe the only way that can happen,” he says, “is if men learn to not only embrace the qualities we’ve been told are “feminine” in ourselves, but to be willing to stand up, champion, and learn from the women who embody them.” And, sometimes, he adds, that means having to “shut up and listen.” As a proud feminist, Baldoni understands the privileged space he occupies within society and advocates for action-based activism. “As men, it’s time that we start to see past our privilege and recognize that we are not just part of the problem. Fellas: we are the problem. The glass ceiling exists because we put it there,” he says, “and if we want to be part of the solution, then words are no longer enough.”

“I was a bully.” This powerful admission early in Sally Kohn‘s talk hits hard. She’s always been told she was a nice person who gets along with all types of people, but the political pundit was haunted by a memory from grade school of mercilessly bullying another kid, with cruel words that stayed fresh in her mind long after every other fact about fifth grade was forgotten. That memory, along with a noticeable increase in recent hateful thoughts in the world at large, made her question the way people described her and even how she thought of herself: “What if I wasn’t a nice person at all — but really just a hateful monster?” She wanted to understand this early episode of bullying in her life within the broader context of hate and its growing influence in the world, and she began to ask questions. One serious truth she found as she literally wrote a book about hate (“Spoiler: I’m against it”): It isn’t enough to fight against big hateful expressions and actions, but also the small, everyday ones too. 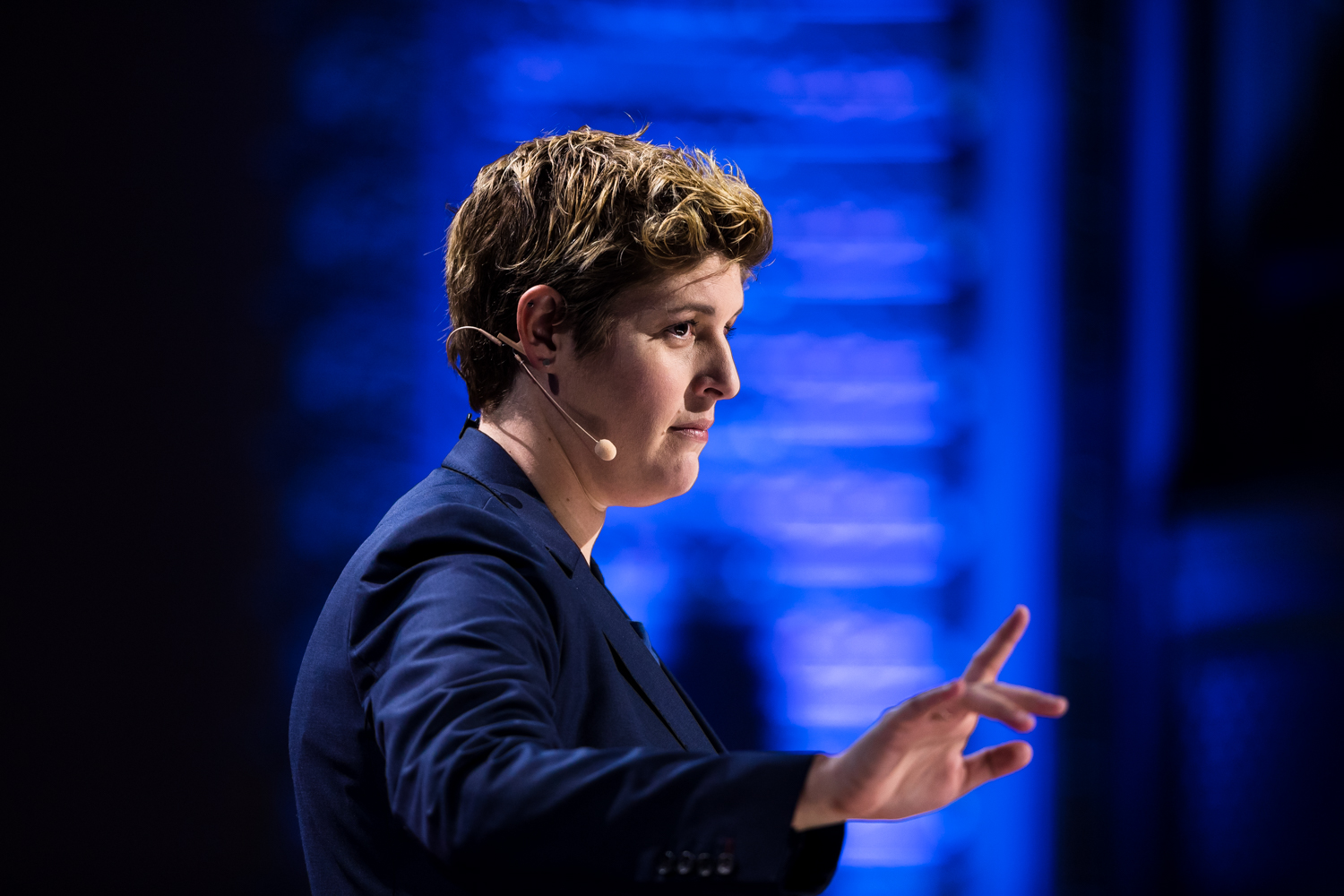 In confronting her own history as a bully, Sally Kohn examines the continuum of hate — and finds that even the smallest act can be part of that continuum. On the other hand, she says, change is possible. She speaks at TEDWomen 2017. Photo: Stacie McChesney / TED