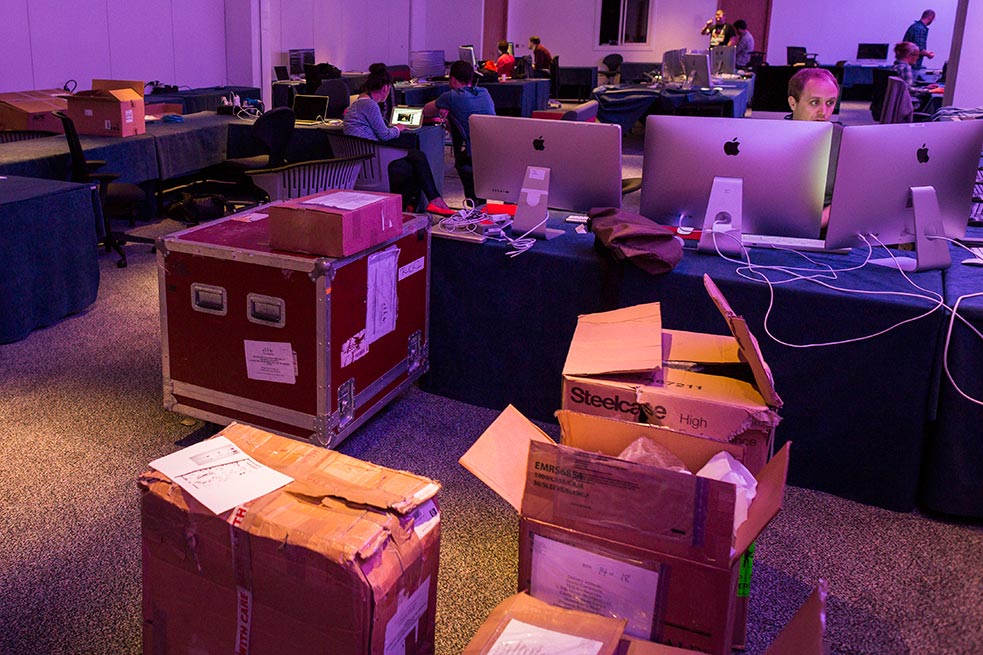 Boxes and crates get unpacked in our video team’s “media cave.” When things don’t arrive in time, it can send staffers scrambling to buy new equipment.

Two days before TEDGlobal 2012, Will True found himself on a train, trekking across Scotland on a mission.

See, one of six cases sent by our video team from New York City to Edinburgh for the conference was stuck in Scottish customs. Its contents: hundreds of terabytes of high-speed hard drives. TED Talks are filmed on digital video cameras, and as each talk is given, the camera’s files are copied to these hard drives. Without them, the team wouldn’t have adequate backup. It was Saturday. Customs was closed.

At the time, there wasn’t an Apple Store in Edinburgh, or any vendor that sold the kind — and amount — of professional-grade hard drives we needed. And so, True, our product development manager and an all-around helpful guy, boarded a train bound for Glasgow. Once there, he headed straight to the Apple Store downtown on Buchanan Street and bought all of their high-speed drives, about $15,000 worth.

“I loaded up a big suitcase and backpack. It ended up being quite a bit heavier than I thought,” he says. “So the Apple Store loaned me their biggest specialist to help me get to the train. It was quite an adventure.”

Shipping is one of the most complicated parts of making a TED event happen, ensuring that all equipment, speaker props, exhibit components, furniture and video monitors arrive on time and intact. Our warehouse and logistics coordinators expect hundreds of packages, crates and cases to arrive before TED2015 begins on March 16. Among the deliveries received so far: a gigantic box of tape (for last-minute fixes); 38 cases of Kind Bars (for attendee snacks); about 496,656 items from partners like Moleskine, Hickies and S’well (for gift bags); a Peruvian monkey orchid (purpose: unknown); and an antique typewriter salvaged from a shipwreck (for a TED Prize installation).

Yes, shipping snafus happen to the TED staff. But on occasion, they also affect our speakers, especially when they’re demoing large new technology. Boaz Almog’s demonstration of a levitating superconductor, meant to happen on the Tuesday of TEDGlobal 2012, had to be moved to Thursday when his equipment arrived late to Edinburgh. His demo also presented a challenge because it involved liquid nitrogen, a hazardous material. Speaker concierge Priscilla Fazakas, who makes sure everyone has what they need, remembers, “There was lots of hoop jumping in securing a permit and having the venue approve bringing it inside. Instead [of shipping it], I worked with a local university to obtain a sample and hired a personal handler.”

In contrast, for his talk in 2009, Bill Gates hand-carried his famous mosquitos with him to Long Beach. He even brought a backup swarm with him, which ended up sitting on the prop manager’s table the rest of the week as a sort of conference mascot.

Sometimes, silly mix-ups turn stressful. For TED2013, also in Long Beach, speaker Alex Laskey requested a wheelbarrow of coal for his talk on behavorial economics and energy use. Fazakas ordered several boxes, but the shipment was inexplicably sent away. “I spent hours on the phone trying to track it,” she says. “I ended up re-ordering it because it needed to be on the stage in less than 24 hours.”

Fazakas has an idea to make the shipping process a little smoother. “When shipments arrive and aren’t well marked, they can get lost in the shuffle. Most boxes look the same,” she says. “I suggest that people use colored tape to mark all their boxes.” 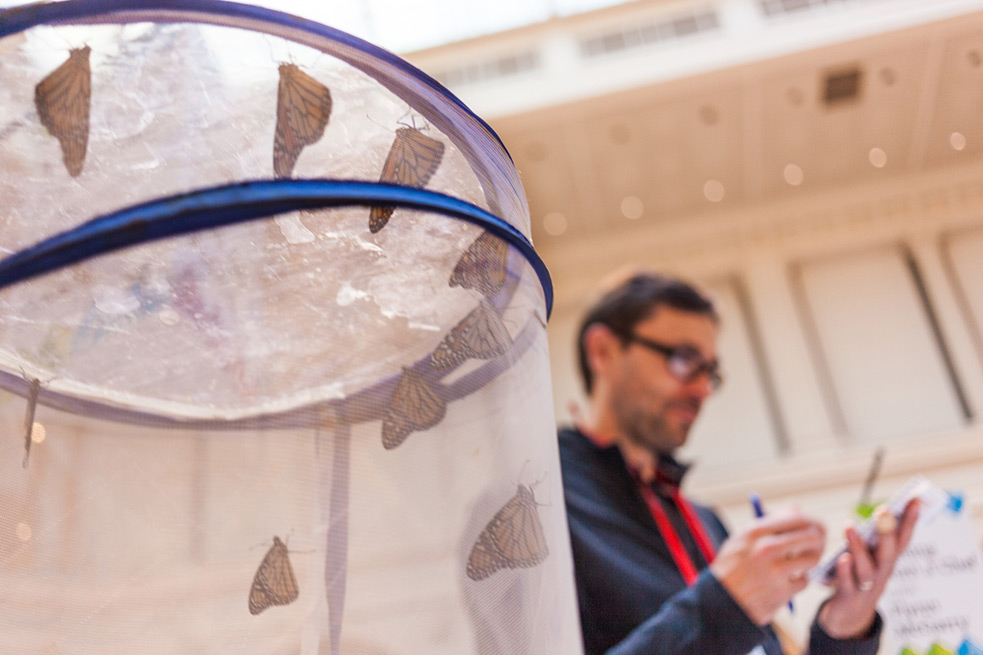 These monarch butterflies were shipped from Georgia to New York in a lunch cooler filled with ice packs. Apparently, the cold temperature keeps them comfortable.

Every now and then, speaker shipments are alive — like the ox that was transported to TED2012 in Long Beach. Or the monarch butterflies that were send to TEDYouth 2014 in Brooklyn. “Jaap de Roode shipped them from Georgia to New York so that the kids would be able to hold them,” says content coordinator Elizabeth Tornheim, who received the package. “He sent a lunch box cooler, and each butterfly was individually placed in a small plastic envelope inside. A couple fluttered as we looked at them. The butterflies fall asleep and stay comfortable when they’re cool, so our team changed out the ice packs in the cooler daily.”

Gwen Schroeder, TED’s post-production manager, is responsible for shipping video and encoding equipment to conferences from our New York offices. She says that her team starts packing a month and a half in advance of any conference, and has everything out the door with 30 days to go. They pack all their gear in sturdy Pelican Cases and spend anywhere from $5,000 to $15,000 for shipping, depending on the location of the conference. If it is international — like TED2015 in Vancouver, Canada — lots of time is dedicated to filling out customs forms.

“Every single tiny little box has to be checked properly,” says Schroeder.

Still, arrival is not guaranteed. “We have contingency plans just in case,” she says. “Either someone flies later behind the rest, or we find rentals on location.” The video team arrives extra-early to uncrate and check everything over, looking for surprises. This year, for instance, our video-encoding rack lost a wheel in transit. A local hardware store will come to the rescue.

Of course, at the end of the conference, everything gets shipped back — to speakers, vendors, warehouses and our offices in Vancouver and New York. “Last year some rental iMacs got stuck in customs from Canada to the United States,” says Schroeder. “It took more than 10 calls to get them released. Even then, two items were still shipped back to Vancouver. And we had to start all over again.”