The TED2019 theme, Bigger Than Us, promises to be larger than life — big ideas, monumental insights, out-of-this-world discoveries, and more! — so naturally, the session art must deliver that sense of awe too, and does.

Colours & Shapes, a Vancouver-based design firm, has created larger-than-life environments for TED since the conference moved to its custom-built Vancouver theater in 2014. Their immersive and transportive designs, splashed across three massive screens, whisk TEDsters away to rich, hyper-visual playgrounds.

We caught up with them this year to learn about what happened behind the screens.

Q: Take me through the creative process, from receiving the prompts to fruition.

This year took shape in a unique way. We were tasked with not only creating all of the session environments, speaker bumpers and conference opener but to redesign the stage from the ground up. This was an opportunity to rethink the TED stage, leaning into the themes for this year and how to create a powerful experience for each person in the theater.

The TED team had a desire to do something really big with video and extending the visual canvas across the entire stage. All the moving parts and technical factors play into what is possible within a custom-designed theater with multiple performance acts, specific broadcast needs and more. We really wanted to bring more depth and dimension to the stage; we knew we had our work cut out for us.

The process is always very collaborative with the whole TED team to find just the right look to elevate and support each session. The magic really starts to appear when we get to the point where we can translate early concepts to actual looks in the theatre — when stage design and artwork come together to create a unique space for each session.

Q: How many people work on making this happen? How many hours?

One of our favorite aspects of working on a project of this scale is the opportunity to hand-pick a team of creative collaborators, animators, illustrators and artists to bring the creative direction to life. All in all, a team of 13 people spent over 750 hours creating all of the screen content for TED2019. It’s a massive undertaking, but we love being able to create something beautiful with so many incredibly talented people.

Q: What were you most excited about when you heard this year’s theme was Bigger Than Us?

“Bigger Than Us” sparked so many fun points of inspiration for our team. Scale, multiplicity and a deep emotional sense of being part of something big were all themes that surfaced early. Additionally, once we saw Jordan Awan’s beautifully playful illustrations that made up the theme for this year, we were drawn toward embracing a more warm illustrated aesthetic.

Q: The turnaround for some sessions can be a bit tight. Were there any this year that really came down to wire?

TED is so committed to curating the best content in the world, and that means that certain things can change late in the game as the full picture of themes, talks and what fits best and where is constantly being reassessed and tweaked — right up until the event. Based on this reality and the complexity of the creation and builds of some of our environments, we are typically refining artwork right up until the start of TED. Play is one session that had a lot of moving pieces to pull together to make it work just right on the stage, but it looks really fun! There really are little tweaks and improvements that we dial in on all the pieces once we are in the room, so yes — we’re proud of all of them :).

Q: The art for each session is based on the session title — any secret inspirations?

Yes, absolutely! Truth is really about a sense of searching for truth in community. So we imagined a group of explorers searching a mysterious cave-like space for gems of truth in the darkness. We start TED2019 with this sense of curiosity and wonder. Matt Chinworth’s richly textured illustration style perfectly captured the inspiration on this one.

Possibility brought to mind the sense an artist feels while looking at a blank canvas, just before filling it with colour.

Mystery was fun. We imagined a vibrant otherworldly jungle environment filled with camouflaged creatures. There is something there, but we never really get to see. We knew we wanted to work with Nick Ladd on this since he has created some really beautiful artwork with a unique VR illustration technique. Nick created this beautiful environment, painting the whole world in VR that we could then fly through and explore.

Q: Which sessions are you most excited to see play out on the TED screen?

We love the artwork our incredible team created for every session, so it’s hard to pick. Here are four moments that stand out:

The TED2019 opener. We knew that Jordan Awan’s playful illustration just had to have an equally playful animation style. Ryan Woolfolk’s animation and John Poon’s music and sound design make us smile! We think TEDsters in the theater will agree.

Mindshift: A 3D world of humanoid objects trying to learn and build, sometimes succeeding, sometimes failing. Nick Counter and Mike Ellis design such a fun and interesting world that feels right at home with the architectural forms on the TED stage.

Imagination: This is probably the earliest clear concept we developed for this year. We imagined a beautiful but forgotten performance space filled with mirrors. In an impossibly serendipitous moment, we see a butterfly land on stage and create a colourful kaleidoscope of reflections and light throughout the scene. It’s a beautiful imagined moment that sparks a sense of wonder. Eleena Bakrie’s gorgeous illustration style really makes the stage sing.

Possibility: We actually built a scale model of the TED stage in studio for this one. We ended up strategically pouring gallons of paint all over it, letting color slowly overtake the entire stage. The flowing paint you see is all real and physically interacts with the forms on the stage as it travels down. 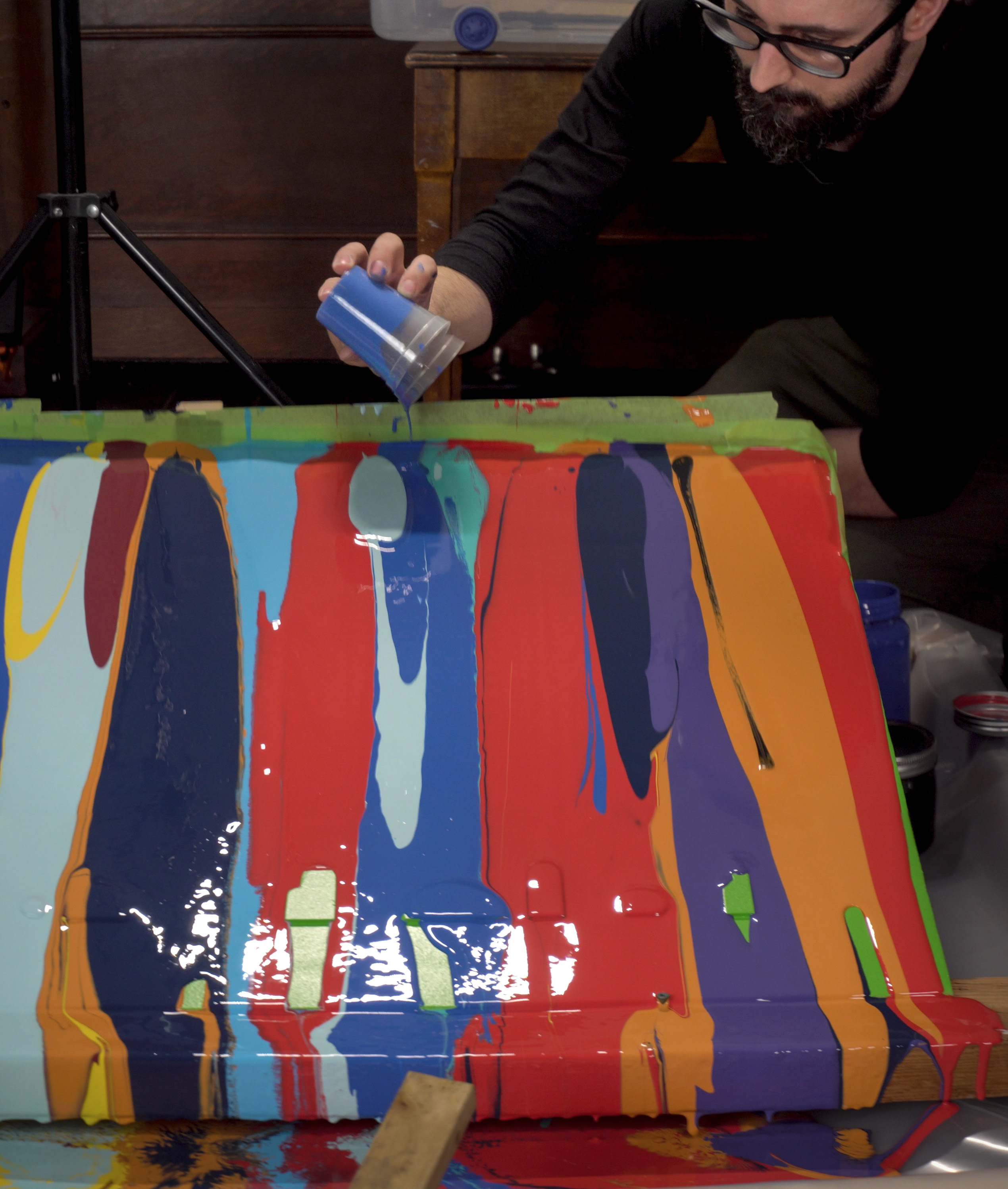 Q: What do you want the audience to experience while watching your art?

Everything we do ties back to our “why” as a creative studio: create powerful experiences that matter. Really, we want to create a space that feels incredibly beautiful and sparks wonder in the audience. TED is already brilliant at accomplishing this goal, so our aim is really to come alongside and help create a space and an environment that thoughtfully and intentionally ties into the theme of each session and each talk at TED2019.

We really value the opportunity and the challenges that come with creating something special with TED each year. This year was no exception and the added components of re-imagining the design of the TED stage in addition to the 100+ content deliverables was something that required long hours, a thorough design process and deep collaboration, putting this years theme into practice = Bigger than us.