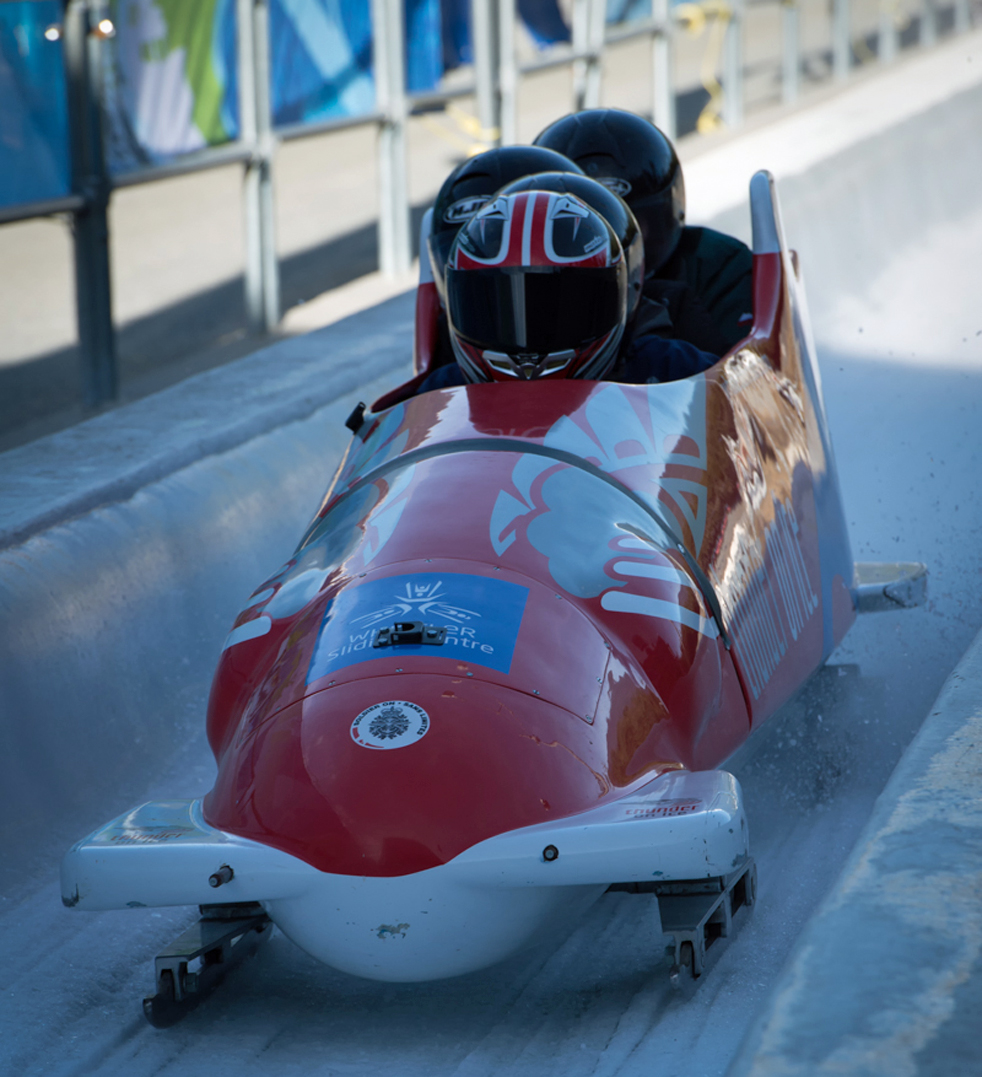 When I signed up to bobsleigh at TEDActive, I wasn’t sure what that entailed. I was ready to go dashing through the snow, but didn’t quite understand how a bobsledding newbie might partake in what I only knew to be a dangerous Olympic sport.

It turns out that both newbies and Olympians alike use a meticulously maintained ice track, which is watered, scraped and smoothed every morning. We were headed to the very same ice track at the Whistler Sliding Centre used in the 2010 Vancouver Olympics. It’s one of only four bobsleigh tracks in North America and one of only 16 in the world. Of all 16, the Whistler track is the fastest.
Among the group of 22 TEDActive attendees who boarded a bus for this bobsleigh adventure, sponsored by Abbott, none of us had ever done it before; when I asked, most people said some variant of “C’mon, when am I ever going to get the chance to go bobsledding again?” One participant, Andrew Healy, even told me: “It’s been a lifetime ambition.”
When we arrived at the Whistler Sliding Centre, it was decked out in homage to the 2010 Winter Games. Several people made a beeline for the (unlit) torch on display, eager for the photo op. Dragging us away from our selfies, the staff explained that we would be three to a sled behind a professional pilot (aww, man! Just kidding: phew!), and that the sleds used by regular humans like us were actually built slightly differently from those used by Olympians. Ours were a bit wider, had cushioned bottoms and higher sides to better protect us in the event of a crash, and most important had no brake in the back. Unlike on a real bobsled team, where the rear athlete is the brakeman, we would be keeping our hands inside the sled at all times while the pilot did both the driving and the braking.
This was the most important rule in our safety briefing on the “Bobsleigh Sport Experience”: Put your gloves on, hold on to the wire inside the sled walls, and DO NOT LET GO. We were also given some tips on how to hold your neck and spine to protect them against the 3 to 4 G’s of force we would be experiencing as we sped down the track at 125 kilometers per hour (which sounded very fast to this American until they did the conversion to 75 miles per hour). But mostly, if we were not very good at multitasking in the face of fear, our main job was not to let go. 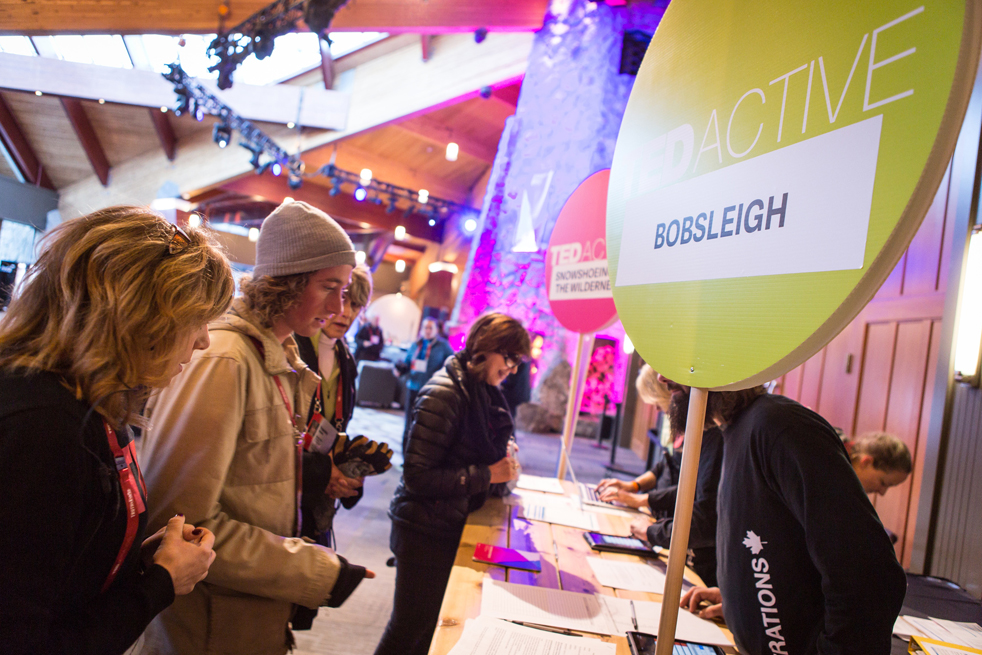 When I signed up for this activity, I didn’t quite know what I was getting myself into. Photo: Marla Aufmuth/TED

As we prepared for our trips down the track, we met Pat Brown, a former professional bobsledder and one-time coach of the legendary Jamaican bobsled team. He assured us we should not judge him by the fired-up coach in Cool Runnings, and that he would be kind in piloting some of our sleds that morning. He shared his own bobsleigh life tale — his began at the age of 17, when his high school science teacher happened to be an Olympian bobsledder. Seventeen is actually pretty early to try one’s hand at bobsleigh, he said; most don’t begin until their 20s, after leaving other sports. This news was enthusiastically received by the roomful of TEDActive first-time bobsledders.
Fully prepped and ready for the start of our professional bobsleigh careers, we headed down to the track. Watching the first sleds roar by was terrifying, but I kept my cool and only screamed a little bit. As those bobsledders returned (alive!) and others took their places, I asked how it was. TEDActive attendee Tammy Murray reported, “When you think you’re going as fast as you possibly are going to go, that’s when you go faster.”
Gulp. Ready for anything, I stepped into the last sled of the morning, behind Pat. (Real bobsledders push off their sleds at a full sprint and leap into the sled at once; we got a big shove from a carefully seated position.) The sled began to move. I clutched the wire with my mittened hands for dear life. The sled moved faster. Then it moved even faster. As promised, a particularly unpleasant trash compactor feeling pressed down on my neck and spine. On the curves, the sled shot up onto the walls of the track like a roller coaster. 41.11 seconds later (according to my certificate of bravery and athleticism) we pulled to a stop.
And that was it. I climbed out of the sled and attempted to plant my feet on the ground, feeling like a stranger to each of my limbs. On the ride home, most of the other TEDActivators were gushing with giddiness. Personally, I would describe it more as “eye-openingly unnerving” than as strictly speaking “fun.” As Pat said, “It’s a full-body experience. Nobody gets to the bottom and says, ‘Wow, the view was really great on the way down.’” 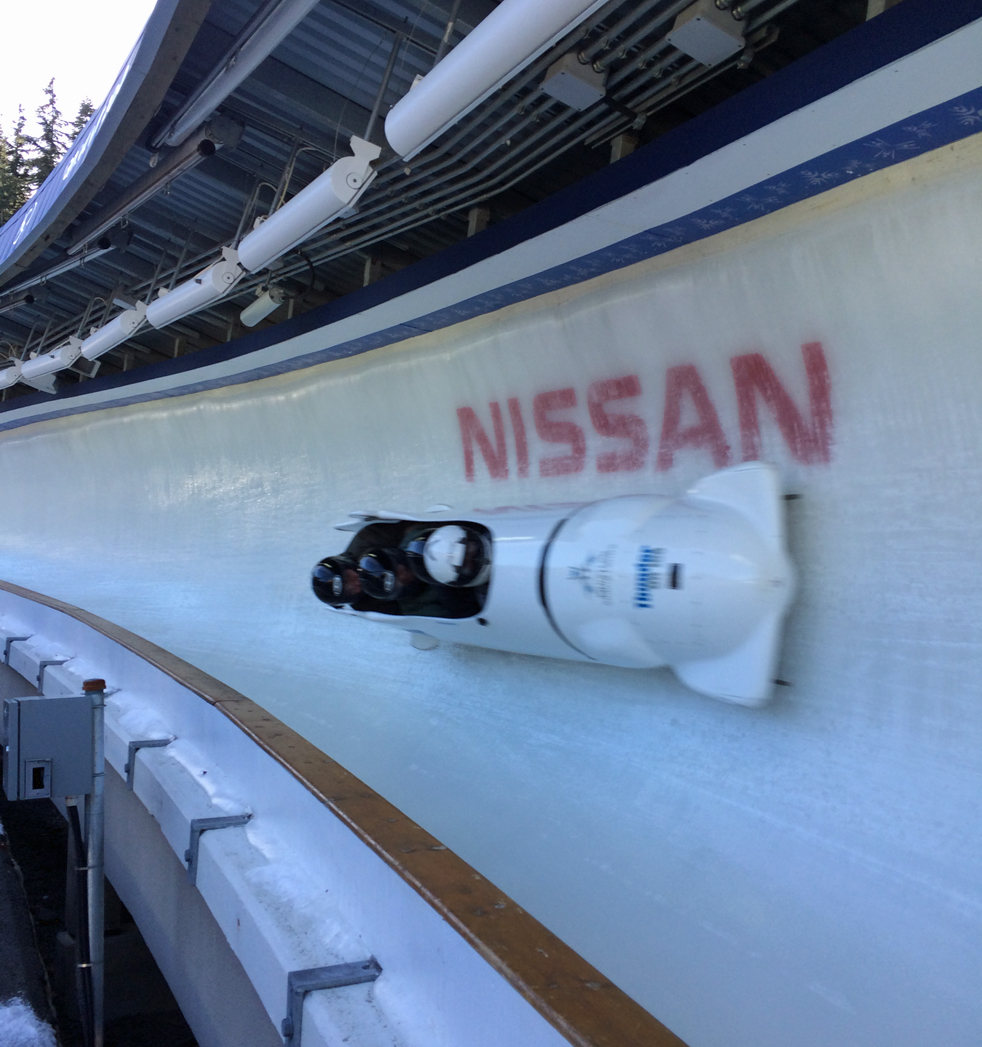