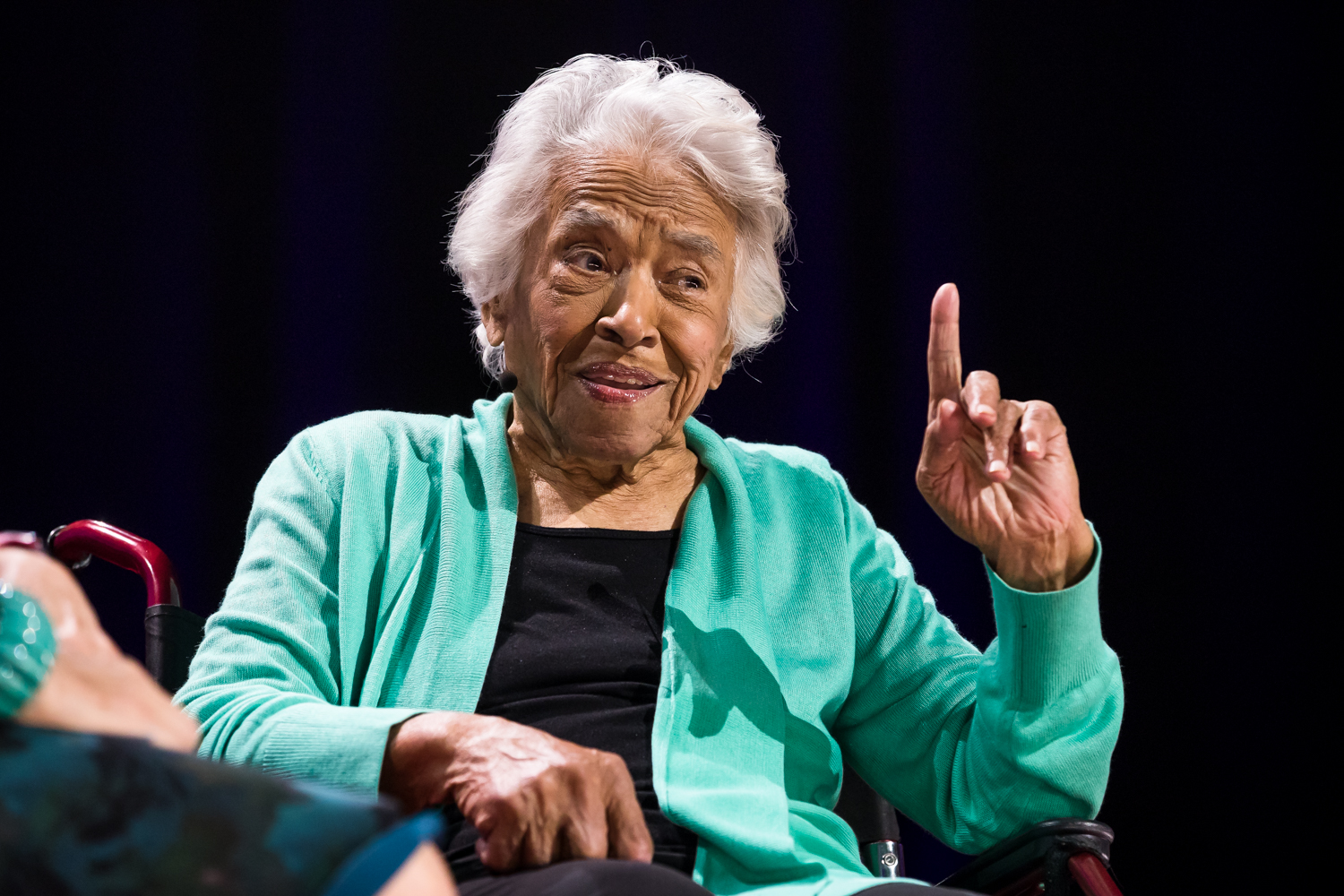 Leah Chase is 94 years old and she spent the morning, as she always does, cooking at her restaurant. She brings lessons from a life of activism and speaking up (and cooking) to the stage at TEDWomen 2017 in New Orleans. Photo: Ryan Lash / TED

We’ve spent the past few days together thinking on big ideas, hard problems and new visions for what the world might be. What will tie it all together? This session on rebuilding — on facing tough questions and finding the inner (and exterior) resources we need to move forward.

Embrace your emotional truth. How we deal with our inner world drives everything, says psychologist Susan David. Every aspect of how we love, how we live, parent and lead is influenced by our emotional agility, how well we approach our emotions with curiosity, courage and compassion. But we need to strip away the toxic rigidity of categorizing emotions as overwhelmingly good or bad,  pushing away the “bad” ones or pretending they don’t exist. And in our society, we’ve adopted a damaging mentality of forcing positivity as a new form of moral correctness. “It’s tyranny of positivity, and it’s cruel, unkind and ineffective,” says David. “We do it to ourselves and we do it to others.” This systematic avoidance and invalidation of our true feelings doesn’t equip us to deal with the world as it is. Yet, how do we conquer something so daunting and painful? David suggests when you feel a strong feeling, to not immediately run for the emotional exists. When she was struggling, journaling provided a way to work through feelings in a healthy and ultimately life-changing way. Tough emotions are a part of our contract with life, she says. It’s up to us to handle them and ourselves with mercy and grace.

It starts with talking — and eating — together. By the time she took the stage by storm, the Queen of Creole Cuisine, Leah Chase, had already started cooking the lunch at her famous restaurant Dooky Chase. Though 94 years old, the activist and restaurateur radiates more life than an eager child, talking about the incredible group of people she has met throughout her life. She laughs at her children for asking her not to be political and proudly states, “You have to be political today. You have to be involved. You have to be part of the system. Look how it was when we couldn’t be a part of the system.” Chase knows too well the progress that has been made for women just in her lifetime — and how much more there is to do. In the midst of the civil rights movement, Dooky Chase served as a space where white and black people came together, where activists planned protests, and where the police entered but did not disturb. To her, it begins with talking, with sitting next to each other and discussing differences and commonalities. Still bustling today, Dooky Chase represents more than a place where people eat: It is symbolic of political transformation as it has “changed the course of America over gumbo and some fried chicken.” And, just in case anyone is concerned that she will retire anytime soon, Chase assures us that so long as she’s living, she will also be doing. 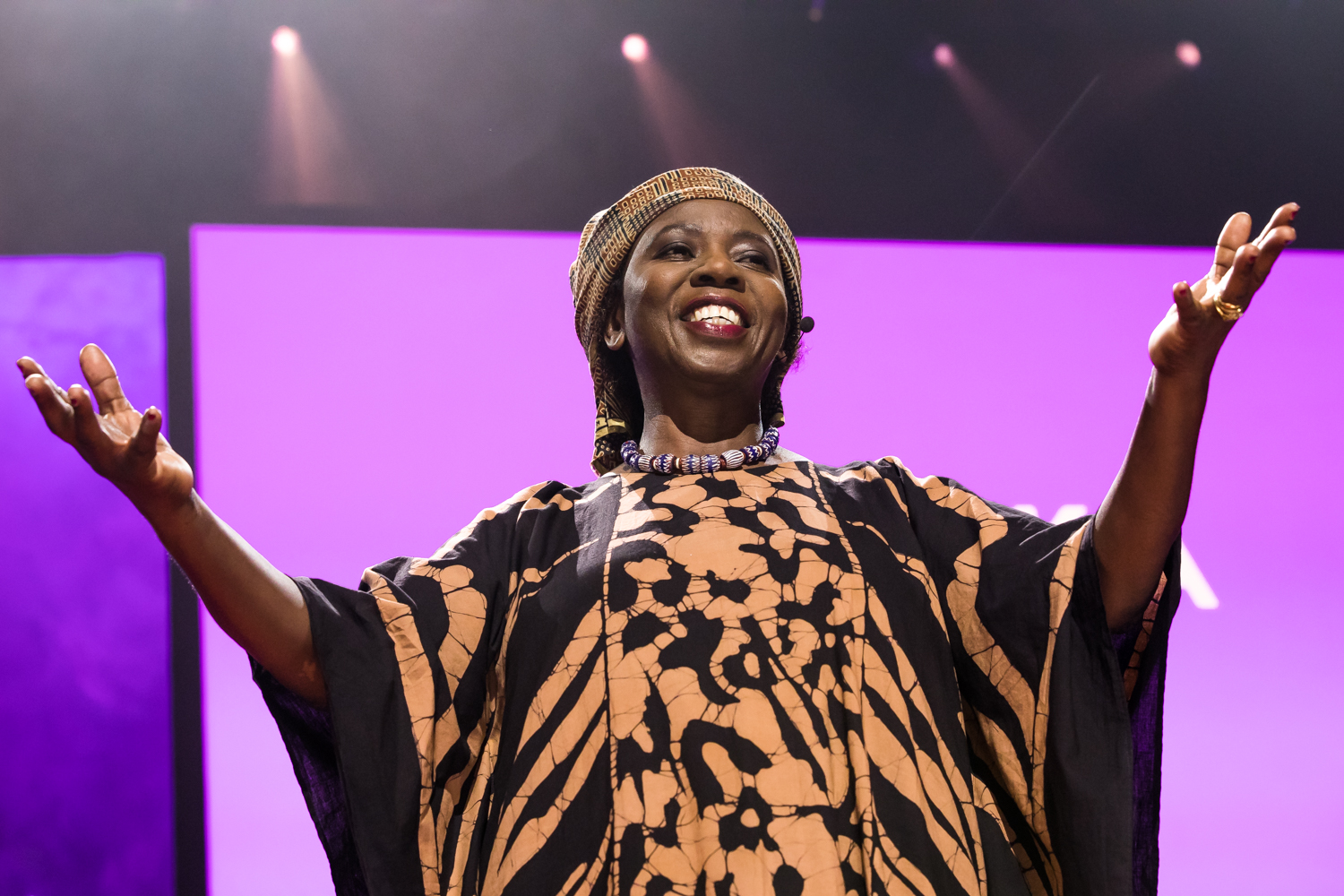 Promoting equal generosity. Like so many of the speakers who’ve stood on the TED Women stage this week, Musimbi Kanyoro is the child of a dynamo. Says Kanyoro of her mother, who lived in a farming village in western Kenya: “she was a little bit like Melinda Gates, but with a lot less money.” Her mother supported the education of scores of children and organized the community, especially the women, to solve problems. She embodied isirika, a Maragoli word that means “caring, together, for one another” or “equal generosity.” Today Kanyoro practices isirika on a much larger scale as president and CEO of the Global Fund for Women, one of the world’s leading foundations for gender equality. There are a few principles of isirika that she encourages people to follow: embrace and recognize each other’s common humanity; value each person’s ideas, skills and contributions, no matter how small; those who possess more also enjoy the privilege to give more. “What would happen if we made isirika into our default?” Kanyoro wonders. “What could we achieve for each other? For humanity?” Let’s find out — together. 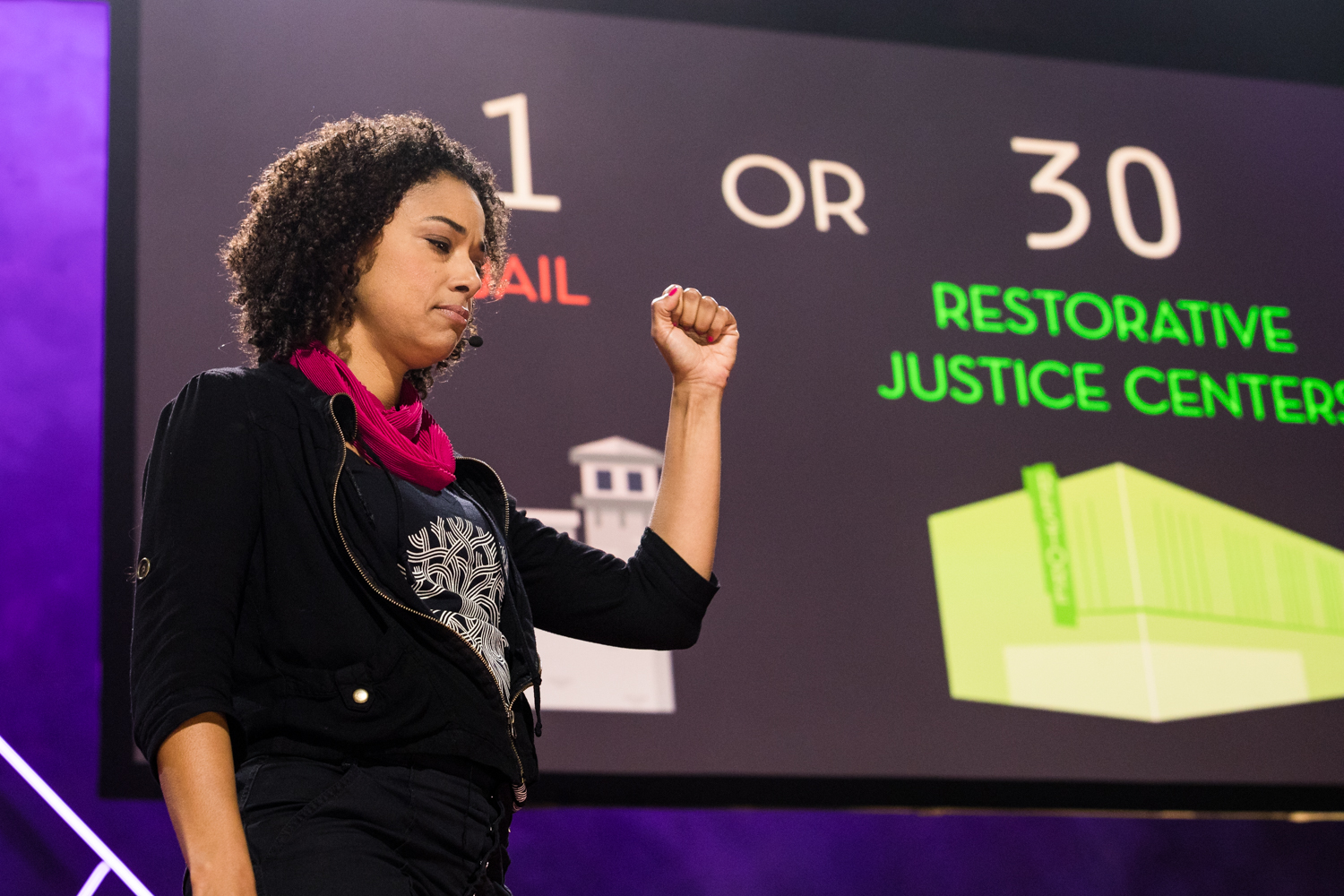 Building spaces for justice. The day a 5-year-old Deanna Van Buren was sent home for punching the boy who called her the N-word, she also designed her first healing space. That forest refuge built out of foliage, righteous fury and her mom’s blankets was the first step on a path to architecture school and — following a revelatory visit to a bleak Pennsylvania prison — her current calling designing restorative justice centers. Restorative justice, Deanna explains, is an alternative system that treats crime as a “breach of relationships,” in which “all stakeholders come together to repair the breach.” Prisons and courthouses, on the other hand, are designed for the punitive approach favored by a justice system focused on mass incarceration. With help and ideas from incarcerated men and women as well as from organizations like the Center for Court Innovation, Deanna designed replacements for these unforgiving institutions via restorative justice and economics centers like Restore Oakland, peacemaking spaces in schools, and mobile villages that bring resources to under-resourced communities. These dynamic spaces provide safe venues for dialogue, healing and reconciliation; employment and job training; and social services to help keep people from entering the justice system in the first place. Invoking Cornel West’s belief that “Justice is what love looks like in public,” Deanna concludes by envisioning a future without prisons and by asking a final question: “What would a restorative justice city look like?” 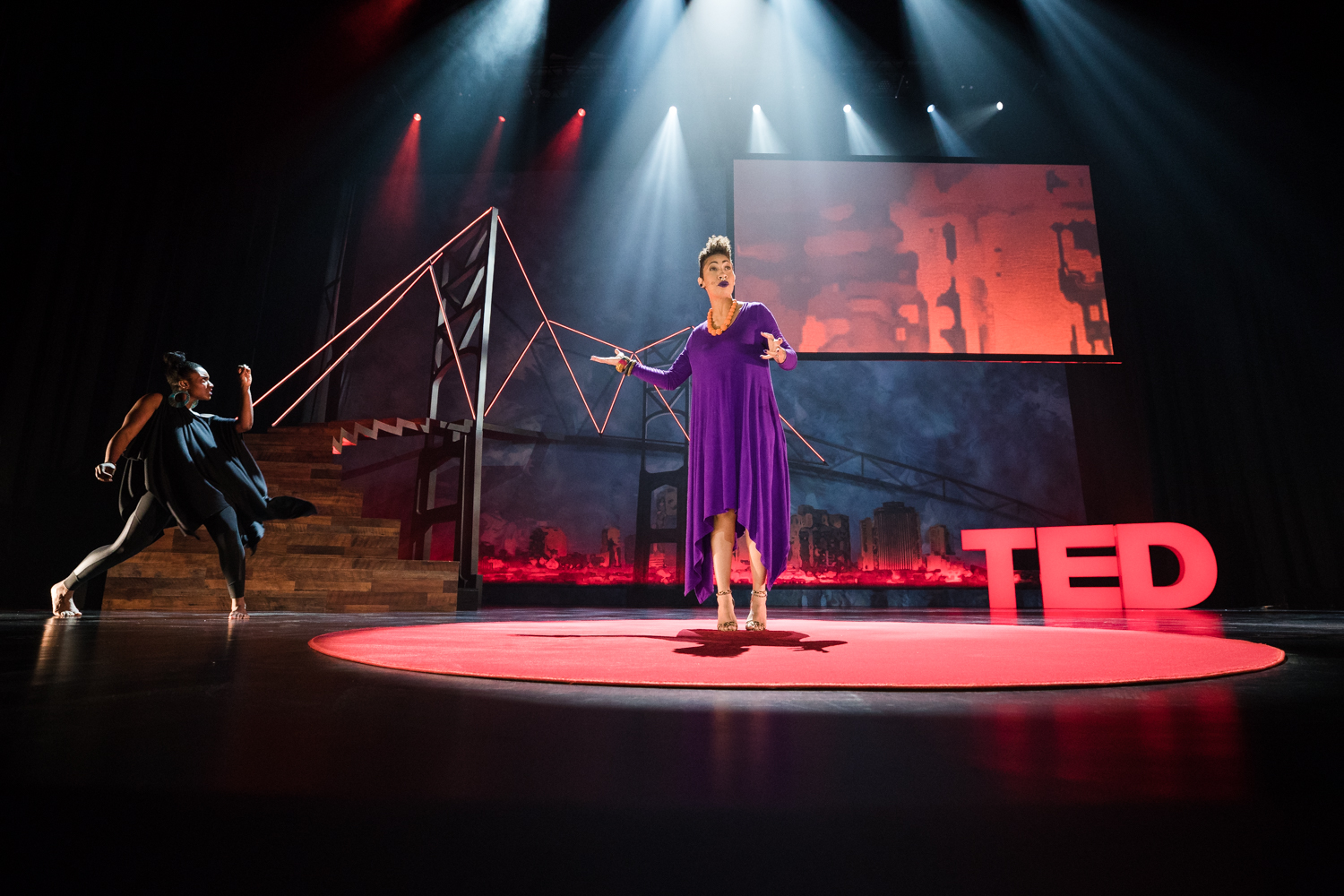 They wanted her / but if they knew her. In an inferno of words and accompanied by the entrancing moves of dancer Chanice Holmes, poet Sunni Patterson sets the TEDWomen stage ablaze with a magicked ode to Black women, wild and untamed despite conscious (and failed) attempts to subdue them. “This winding Niger river of a woman / one who is unafraid to tear away / only to roam and then become the wind,“ recites Patterson. “She who speaks in gusts and cyclones / blasting us back to high ground, high consciousness / she turns and so does the world.” 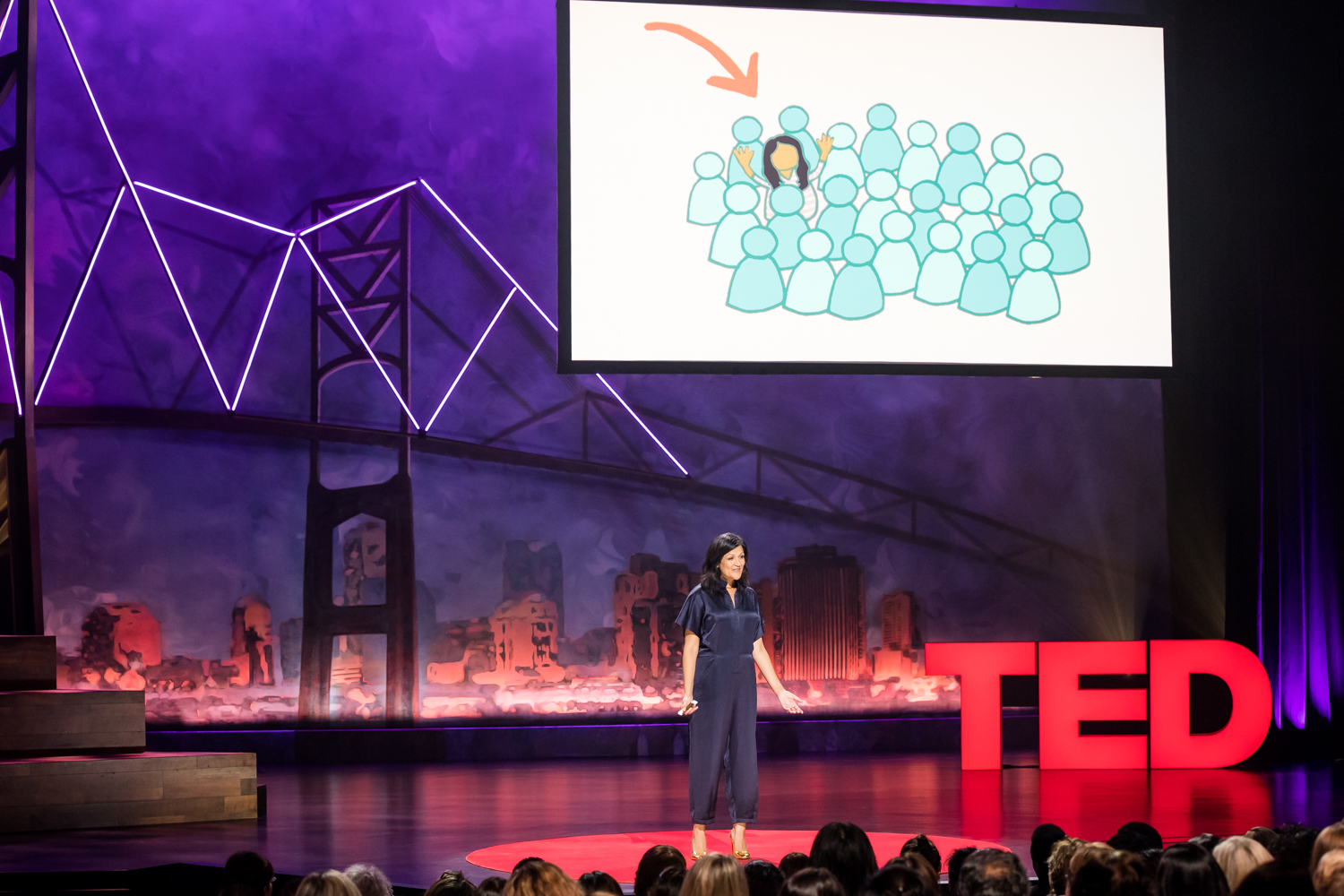 Anjali Kumar is a “none” — a person with no professed religion, but lots of questions. She explored them onstage at TEDWomen 2017. Photo: Stacie McChesney / TED

A failed mission to find God. Sometimes a journey of discovery reveals truths we did not expect to find. More than 50 million people in the United States identify themselves as “none,” or not affiliated with a particular religion, but author and attorney AnjaliKumar found that most believe that there is a God, “We’re just not sure who it is.” With that in mind, Kumar went on a mission to define her own version of spirituality. Eschewing “big box” religions, Kumar spent time with witches in New York, a shaman in Peru and even placed a call to God from Burning Man, but it wasn’t until word spread of her planned trip to see an infamous “healer” in Brazil, did she make a truly remarkable discovery about humankind. Kumar‘s inbox was flooded with requests from friends and strangers, asking her to make requests on their behalf. Despite the diversity of people behind the requests, they generally agreed on what they wanted: good health, happiness and love. So although people may identify themselves with a multitude of identities or even as a “none,” Kumar found that when faced with any version of God, how we differ is less important than how we are the same.

Secrets of the Great Migration. Journalist and author of The Warmth of Other Suns Isabel Wilkerson tells the story of the Great Migration, the outpouring of 6 million African Americans from the Jim Crow South to cities in the North and West, between World War I and the 1970s. “This was the first time in American history that American citizens had to flee the land of their birth just to be recognized as the citizens that they had always been,” she says. It was also the first time in American history that the lowest caste people signaled they had options and were willing to take them, and the first time they had a chance to choose for themselves what they would do with their innate talents. “These people, by their actions, were able to do what the powers that be, North and South, could not or would not do,” she says, “They freed themselves.” 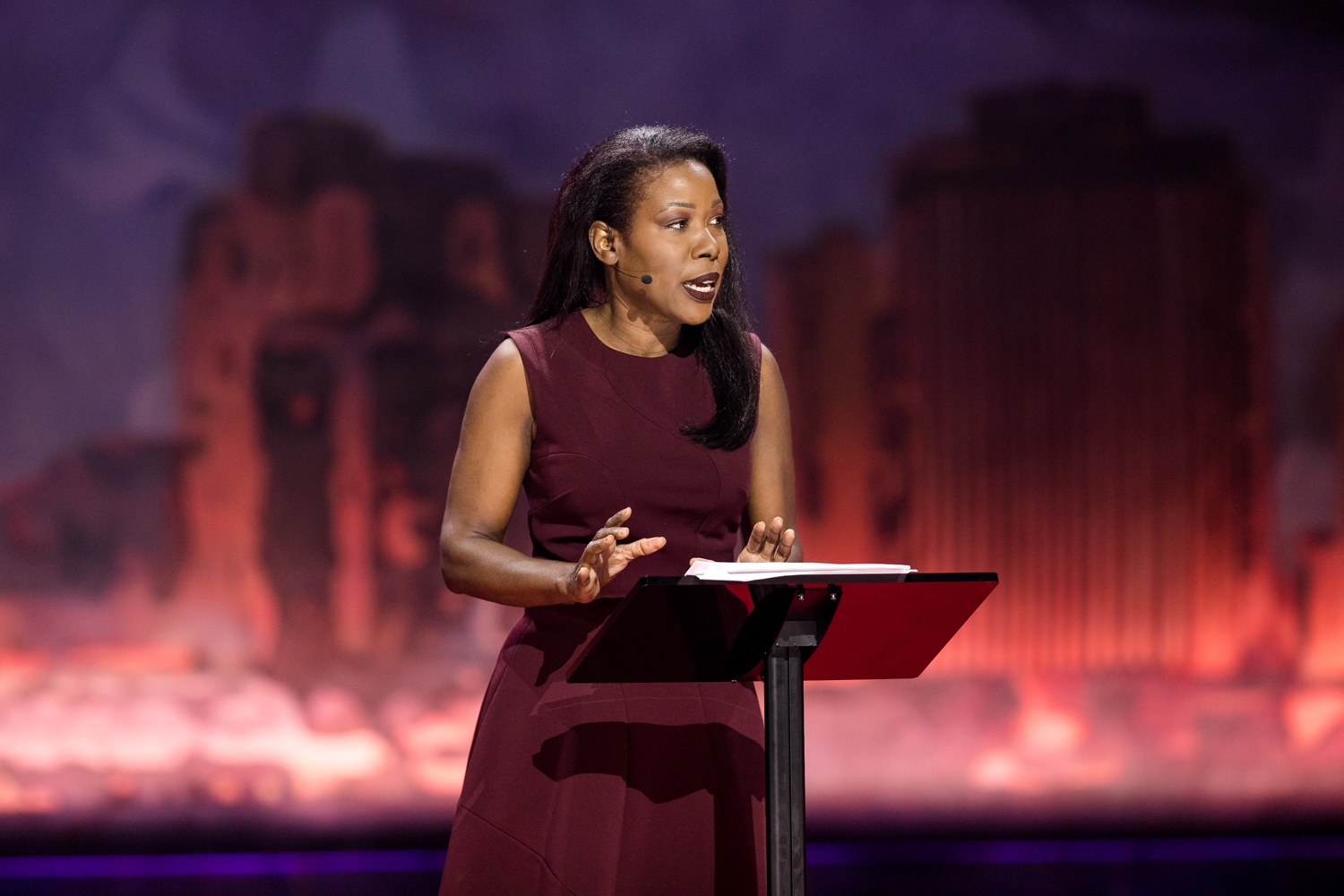 Isabel Wilkerson explores the greatest hidden story of the 20th century — the Great Migration of African Americans to cities of the north for work, safety and escape from Jim Crow. Photo: Stacie McChesney / TED

Revolutionary love is the call of our times. “If you cringe when people say love is the answer — I do too. I’m a lawyer.” Valarie Kaur closes the TEDWomen conference with a blockbuster talk about the revolutionary power of love, the “sweet labor” of actively working to make the world better, to hear each others’ stories, to help us see no one as a stranger. This struggle became personal to her when she gave birth to a son “in a time white nationalists call their great awakening, when far right-wing movements are on the rise around the globe, when hate crimes against Muslims and Sikhs are the highest they have been since 9/11. My son is growing up a little brown boy in a nation more dangerous for him than the one I was given. I will not be able to protect him when others see his body as a terrorist.” How can we begin to live in this world, how can we find the strength to make change? Do like the midwife says: Breathe. Then … push. 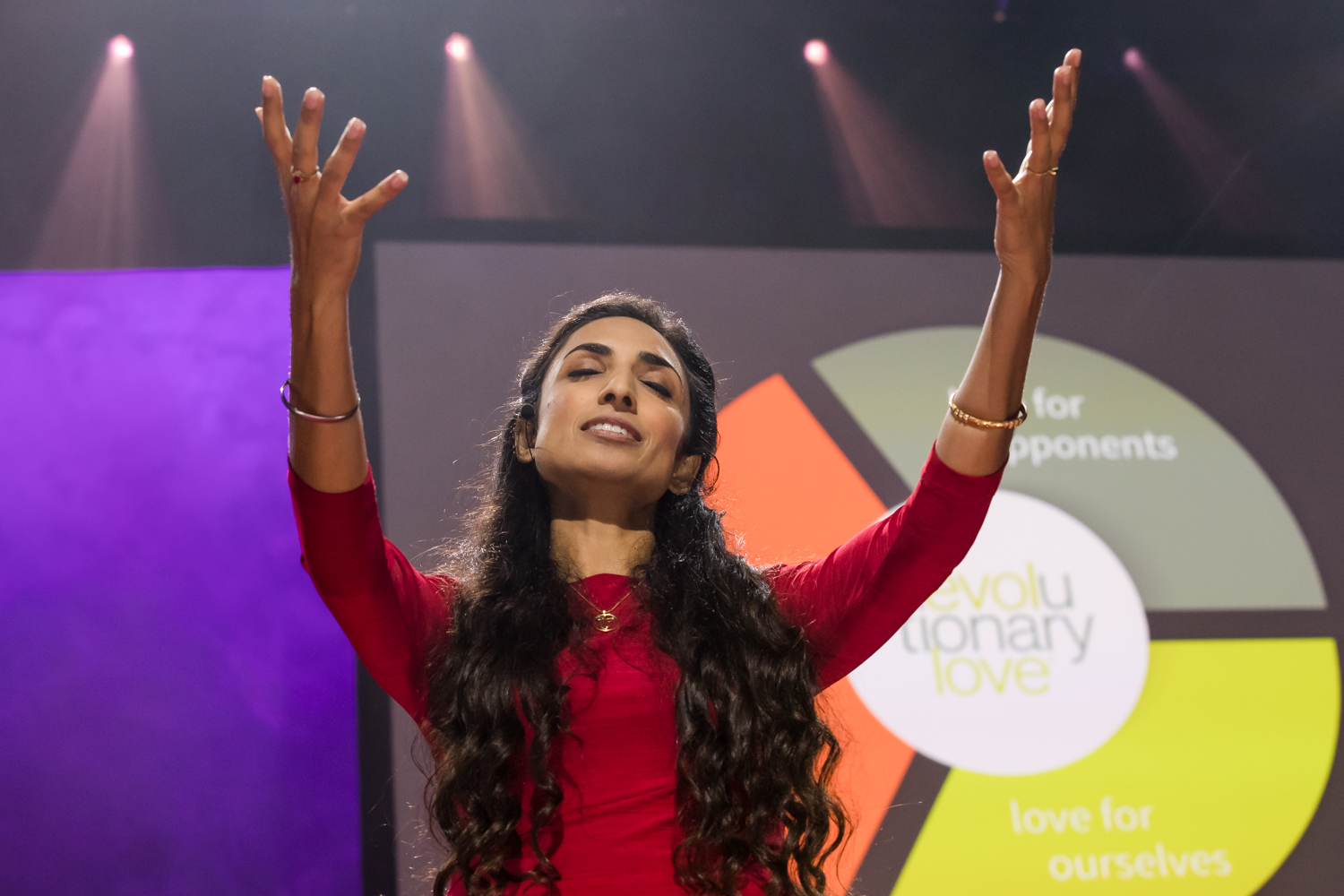 Valarie Kaur asks us to re-imagine the power of love at TEDWomen 2017. Photo: Ryan Lash / TED