In the eight session of TED2017, hosted by TED’s Head Curator Chris Anderson, eight speakers — and one unforgettable live jetpack demo — showed us that there’s wonder all around us, from the bugs that live in our backyards and on our skin to the dreams that live inside our minds, waiting to be unleashed.

Below, recaps of the talks from Session 8, in chronological order.

Explaining our extremes. Robert Sapolsky is not a violent person. But that doesn’t mean he hasn’t fantasized about torturing Hitler — or gotten a little too into shooting his friends in a game of laser tag. When it comes to violence, we’re all a little confused. “We don’t uniformly hate violence,” Sapolsky says. “We hate the wrong kind of violence … when it’s the right kind of violence, we love it.” In order to understand how such a compassionate and altruistic species can also exhibit such brutality, we need to understand context, at every stage — from “one second before to a million years before,” from adulthood to embryo. Only then can we attempt to understand the poles of human behavior and our remarkable ability to change. 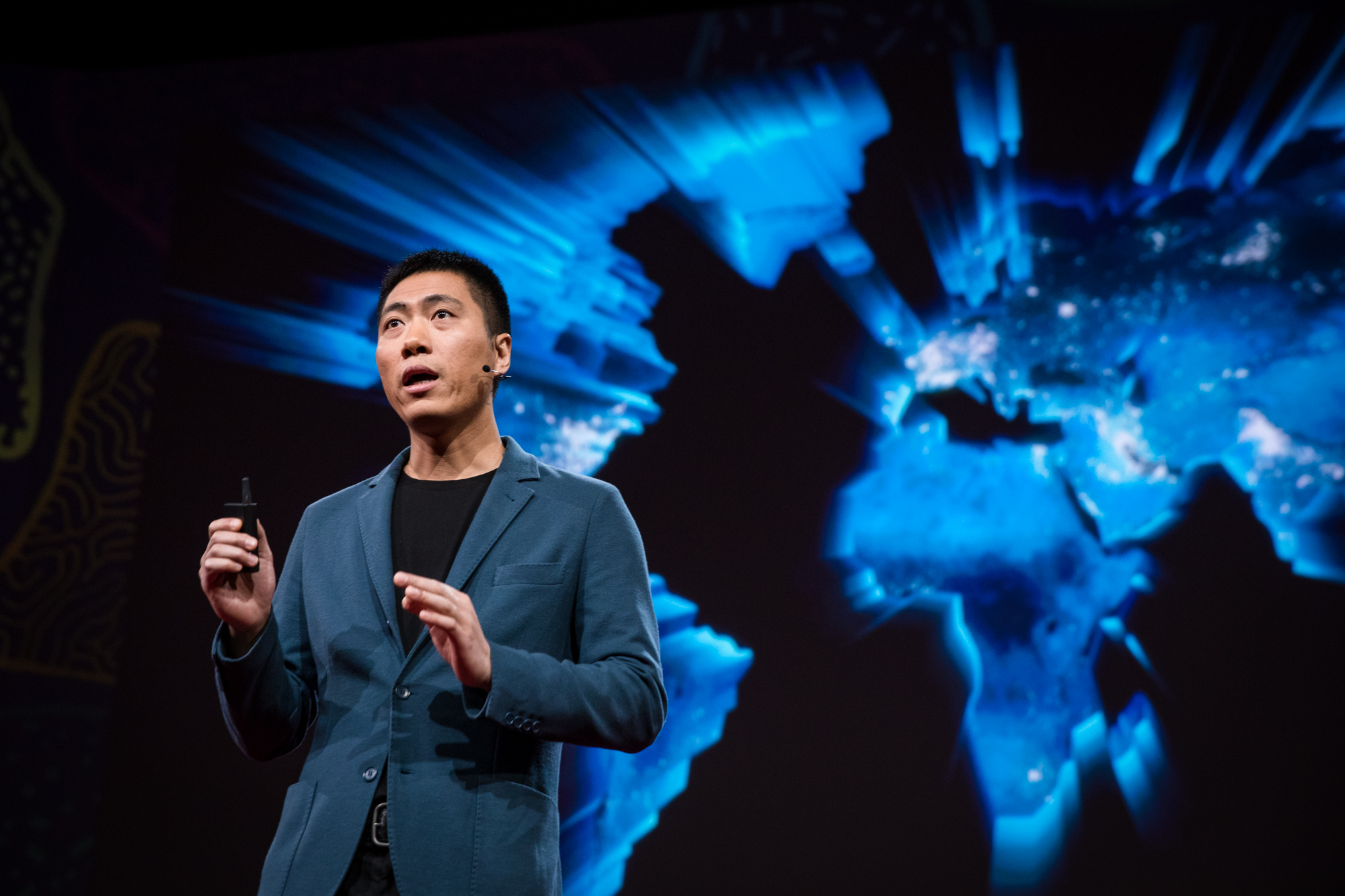 Better health choices, through digital doppelgangers. For his college thesis, genomics researcher Wang Jun coded a digital ladybug to search for food. He was delighted to find that its paths matched those of ladybugs in real life. “Life is a learning program,” he says. The code is DNA, but our genomes aren’t the only things that affect our health; environment and lifestyle factors play a part, too. Jun wondered: “Could I make a ‘digital me’? Could I try to run multiple options on that ‘digital me’?” At iCarbonX, Jun is working to develop digital doppelgangers for real people. These include genetic code, but they’ll factor in other kinds of data as well, from food intake to sleep to data collected by a “smart toilet.” (“So much valuable information flushed away every day!” he jokes.) The idea is that, with all this information, a person could see what would happen with different choices. What if they eat less meat? Run a marathon? Work less? Take a certain dosage of a medication? This tool would empower people to make better health choices. But there’s a bigger goal here too — to pool all this data and create an engine that learns more and more about health and disease. “When we make this ‘digital me’ a ‘digital we’ — when we try to form an internet of life — people can learn from each other’s data.” 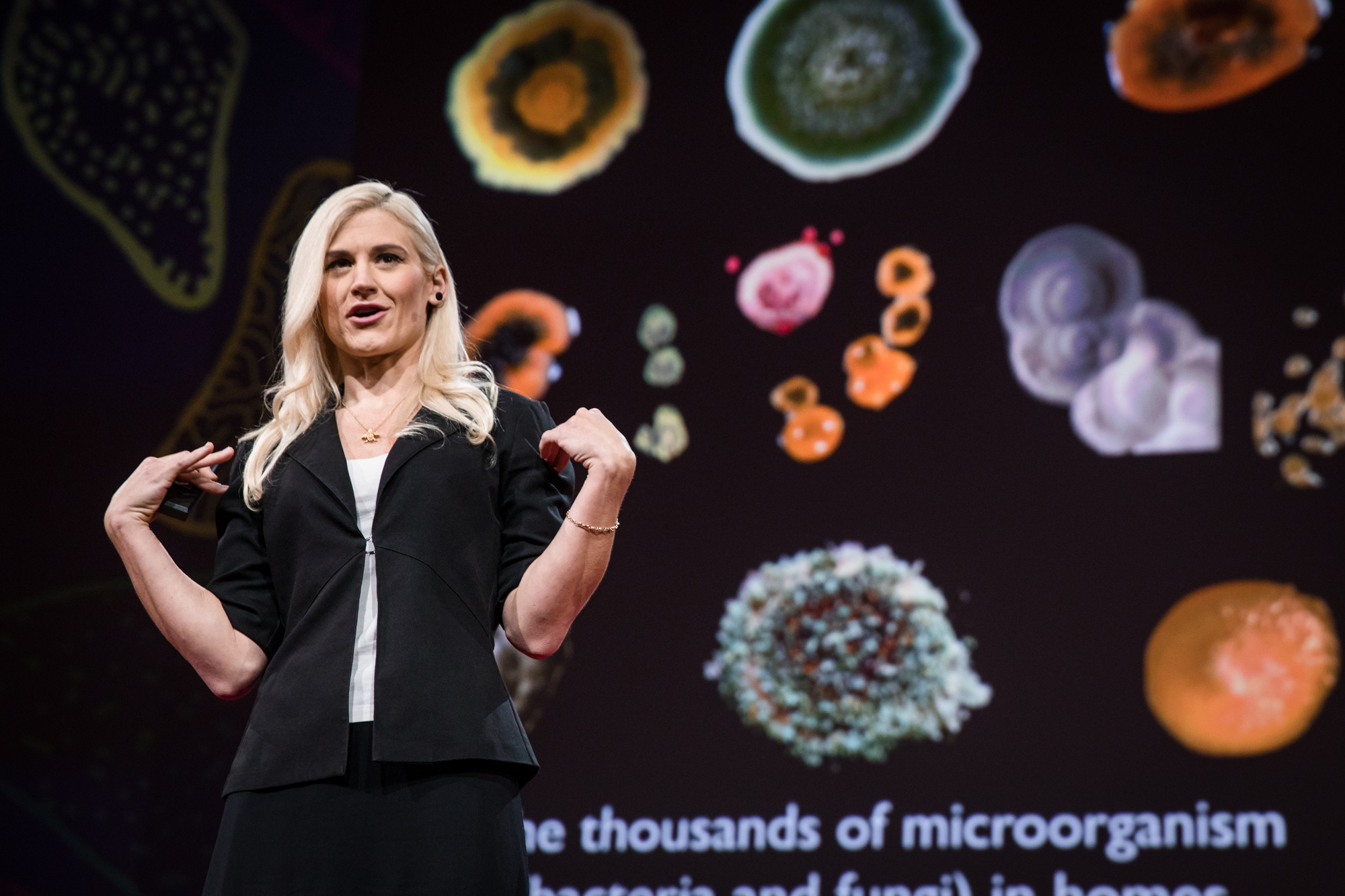 Anne Madden introduces us to the thousands of microorganisms in our homes and on our bodies at TED2017, April 27, 2017, Vancouver, BC, Canada. Photo: Bret Hartman / TED

How the microorganisms in dust bunnies could change our lives. When you touch your face, you’re feeling more than your skin — you’re also feeling fungi pumped out of the air ducts, some of the one hundred billion bacterial cells that live on your skin and the tiny mites that squirm across all our faces. “Last night, they had sex on the bridge of your nose,” says microbial researcher Anne Madden. But this isn’t gross: it’s an opportunity. We’ve spent 100 years sanitizing, exterminating and disinfecting to kill microorganisms, but Madden predicts, the next 100 years will be filled with a new understanding and appreciation of microbial solutions. Along with researchers at North Carolina State University and the University of Colorado, Madden studied the microorganisms in our homes and found one hundred thousand species of bacteria and fungi in dust bunnies — and thousands more on clothing and in showers. Now, their goal is to develop new tech from them. Microbial species are “alchemists,” says Madden. They use an arsenal of chemical tools to eat plastic and toxic waste, produce battery power and nuggets of gold, and even give chocolate its flavor. Madden discovered a microorganism in a wasp that can make sour beer better than any other species on the planet. In dirt, scientists have found microorganisms that could kill superbugs, and in pond scum, one that vaccinates mice against PTSD. There’s so much to learn in this space, says Madden. “Imagine what the other species in your dust bunnies could do.”

A new weapon in the fight against superbugs: light. We’re losing the war on the drug-resistant bacterias and viruses known as superbugs. Last year around 700,000 people died from superbug-related infections, but by 2050 it could be 10 million, says David Brenner. Since the widespread use of antibiotics began in the 1940s, we have tried to develop new drugs faster than bacteria and viruses can evolve — but this strategy isn’t working. As a trained physicist who lost a close friend to a superbug-related infection, Brenner asks: Could we take a physics approach to the problem? For the past six years, he and his team have been doing just that by studying a particular wavelength of ultraviolet light known as far-UVC. In this talk from the front lines of the war against superbugs, Brenner takes to the red circle to report that yes, far-UVC works, and yes, it’s safe. 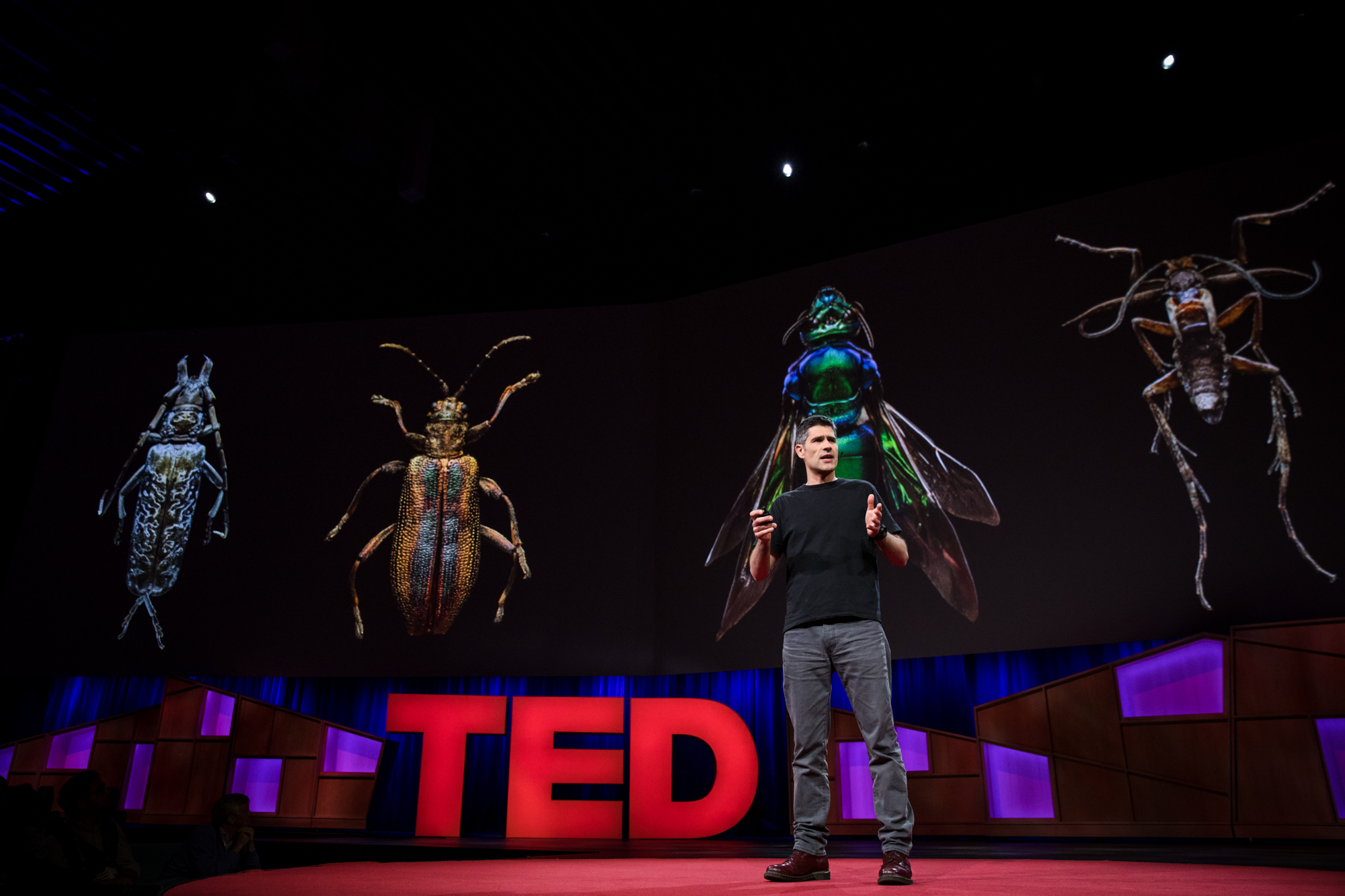 An up-close look at an extraordinary subject. Photographer Levon Biss looks for ways to present the familiar in a new way. Driven by his son Sebastian’s curiosity about a ground beetle he found in the backyard, Biss took his photography and lighting expertise to the micro-scale. The result is a project he calls Microsculpture: mind-blowing, monumental portraits of a world we rarely see, in the form of beautiful, detailed photos of bugs. Biss’s process is very, very involved: Each portrait is made up of 8,000–10,000 individual images, each shot under different lighting and layered on top of one another to create unbelievable detail and relief — and an intense viewing experience. After practicing on creatures from his backyard, Biss showed his project to the Oxford Museum of Natural History, who soon gave him access to their historical collection insects (including some collected by Charles Darwin himself) to expand his project. Over the course of two years, Biss shot 37 insects from their collection, and now Microsculpture has touring the world as a gallery show — look for it in your city.

A real-life jetpack! Who hasn’t daydreamed about flying? For Richard Browning, founder of human propulsion technology startup Gravity, personal flight is an obsession. He’s built an Iron-Man-like suit that leans on an elegant collaboration of mind and body augmented with technology — and brings our science fiction dreams of a jet-pack-filled future just a little closer to reality. Powered by six small (but incredibly loud) jet engines — two attached to each hand and two more attached to his lower back — Browning can take off vertically, hover a few feet above the ground and, with incredible balance and muscle control, navigate in the direction of his choosing. Onstage, Browning shows videos of his many different attempts to configure the tiny jet engines attached to his hands and feet … and after the session, he shows us the real thing, jetting  around the terrace of the Vancouver Convention Centre with, as he says, “his very own Pepper Potts, Adam Savage.”

What shoelaces have to do with aging. Nobel-winning biologist Elizabeth Blackburn‘s curiosity might have started with pond scum, but it ended by shedding light on one of humanity’s biggest questions — why and how we age. Blackburn studies telomeres, the caps of noncoding DNA at the end of chromosomes that, like the plastic tips at the end of shoelaces, protect our coding DNA during cell division. Each time a cell divides, telomeres get worn down and shortened. “Our telomeres shorten as we age, and that’s aging us,” she says. Read a full report on Blackburn’s talk.