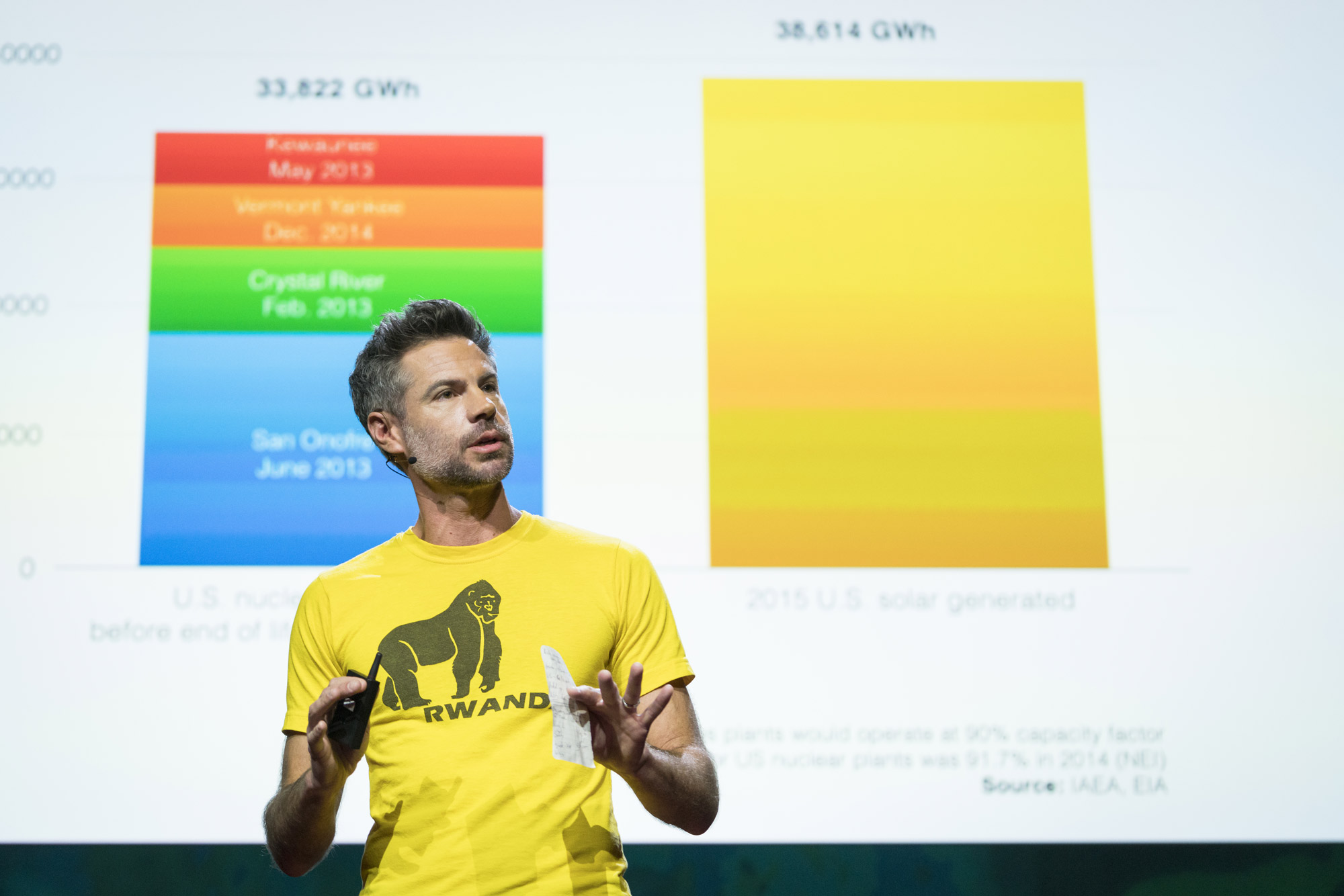 Michael Shellenberger suggests that the future of clean energy should involve nuclear energy — despite our deep-seated worries about the technology. Photo: Bret Hartman

What are the tools we’re using to build the future? Session 3 speakers go deep on what’s next in finance, energy, business and the structures we live in.

The next generation of trust on the Internet. For many online transactions, we rely on middlemen like banks and government to establish trust — but these systems face growing issues like hacking, exclusion and data privacy. Blockchain, “a vast distributed ledger run on millions of computers,” promises to upend all that, establishing trust not through big institutions but through “cryptography and clever code,” says technology communicator Don Tapscott. When blockchain technology matures, Tapscott believes, “For the first time in human history, people can trust each other and interact peer-to-peer,” and the power of that changing interaction could help us address the social inequality that’s at the heart of today’s anger, extremism and protectionism, not by redistributing wealth but by predistributing it. 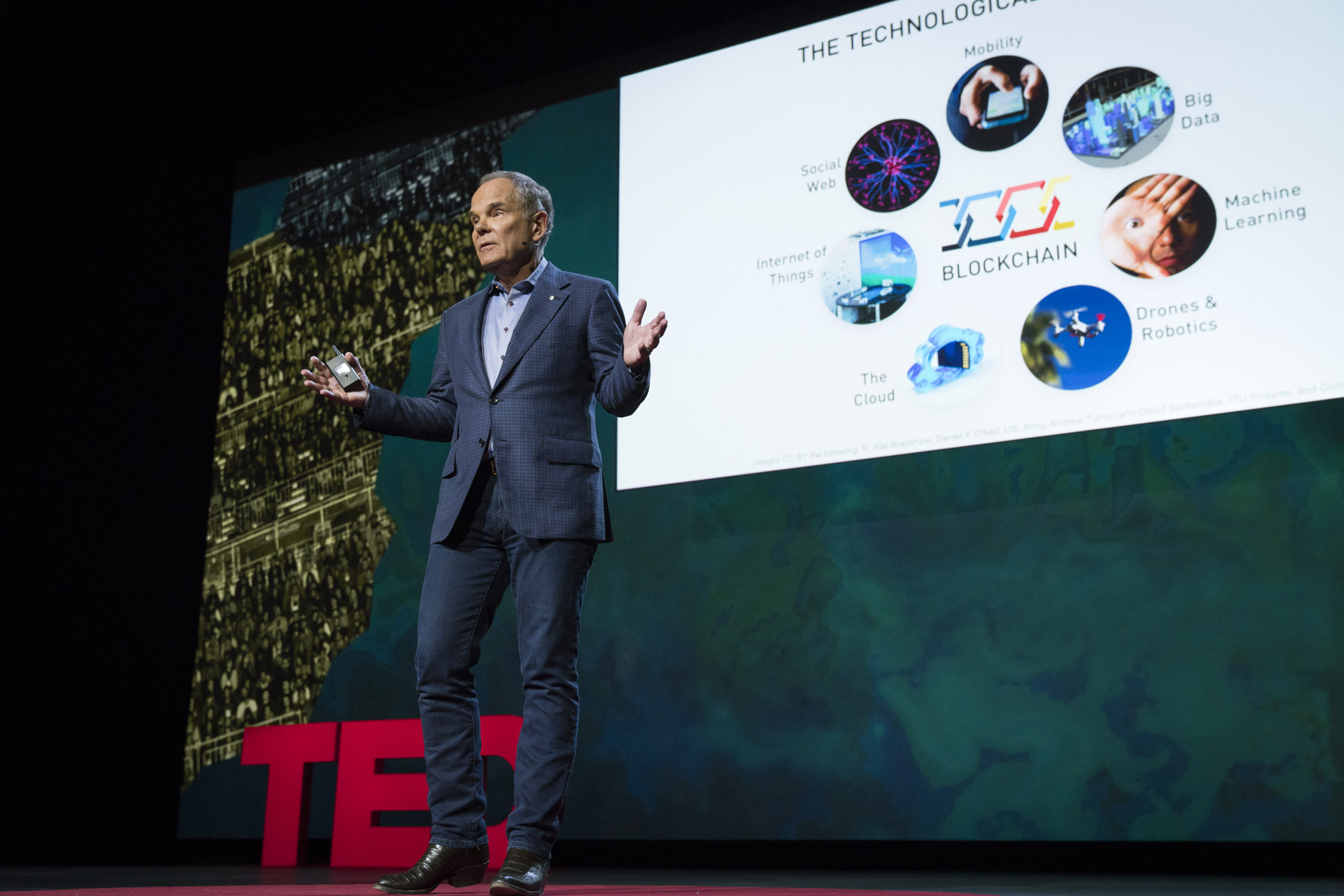 The digital continuation of an old story. “There is a new technological institution that will fundamentally change how we exchange value, and it’s called the blockchain,” says researcher Bettina Warburg. But while blockchain technology is new, its intention is actually quite old, building on the ancient human search to lower uncertainty about each other so that we can exchange value. Blockchain helps us lower uncertainty in three important ways, by helping us: 1. know who we are transacting with, 2. have transparency in our transactions, and 3. have recourse when our transactions go wrong. There’s still a long road ahead of us before blockchain can become a reality, Warburg cautions, but “we need to start preparing ourselves, because we’re about to face a world where distributed, autonomous institutions are going to have quite a significant role.”

The new nuclear choice: Joseph Lassiter challenges us in the audience to view the energy crisis from a new point of view beyond the privileged choices available to the developed world. While developed nations like the US and many in Western Europe can afford cleaner energy sources, much of the developing world, China and India in particular, will use whatever energy sources are available that can improve the quality of life for as many of their citizens as possible, and do it quickly and cheaply. For these booming countries to adopt a renewable energy source, it’s going to have to pass what Vinod Khosla has called the “Chindia Test”:  it must be viable, scalable and effective without subsidy or mandate. Right now, wind and solar power do not pass that test, but Lassiter believes “new nuclear” power can, if people are willing to get past their historical apprehensions. We now have the ability to make and regulate nuclear power sources such that they are safer and cheaper than they have been in the past; now we have to make the choice to pursue it.

Going nuclear for clean energy. We’re in a clean energy revolution, some would think. Actually, it may be the opposite. According to Michael Shellenberger, a climate policy expert, the percentage of electricity from clean energy is declining, with nuclear taking the biggest hit  across the board. Nuclear is very low-carbon and can provide a lot of power, but three pervasive fears surround it that stand in the way of wide-scale generation: safety, waste and weapons. Turns out that nuclear is one of the safest renewable energies, doesn’t produce much waste — and the correlation between countries that invest in nuclear energy and in nuclear weapons isn’t strong. With many of the world’s richest nations taking down nuclear reactors instead of building them, we’re at risk of losing four times more clean energy than was lost over the past 10 years. In other words, “We’re not in a clean energy revolution, we’re in a clean energy crisis.”

The Beautiful Business Bureau? Any numbers of better-business bestsellers will tell you how to do things right. But writer Tim Leberecht does not tell you how to do things right — he wants to tell you how to do things wrong. The argument that he lays out in his 2015 book The Business Romantic is that businesspeople focus too much on our computerized rivals and their growing ability to complete tasks correctly. Instead, he argues that as human beings we have an ethical, philosophical and even fiduciary duty to not waste time trying to one-up our computers and, instead, do what we who are “only human” do best — be gloriously fallible. Not that he actually wants you to screw up. Leberecht would prefer that we focus on what he calls “creating beauty” — creating situations and environments that help balance out the obsession with bottom-line success, an obsession that can damage or even destroy a company’s culture. And of course, he has a list. (You knew he had a list.) 1. Do the unnecessary. Don’t just go the extra mile — do a 10K run, too. Companies need to cultivate the idea that they are more than a spreadsheet. (Key quote: “When you cut the unnecessary, you cut everything.”)  2. Create intimacy. Even in temporary settings, tear down barriers that keep workers apart. (Key quote: “Never underestimage the power of a ridiculous wig.”) 3. Stay incomplete. Single-minded focus on one goal has its plusses, but allows no room for deviation, flexibility, introspection and more. (Key quote:”Beautiful companies keep asking questions.”) 4. Embrace ugliness. As an old saying goes, good judgment comes from experience — and experience comes from bad judgment. By openly acknowledging our flaws, they have less power to harm us. (Key quote: “The first step towards beauty is a huge risk — the risk to be ugly.”)

How bad architecture added fuel to the fire in Syria. Marwa Al-Sabouni is a young architect in Homs, in Syria. Speaking to us over Skype, she talks about her ruined home city … and looks at how Syria’s once tolerant and multicultural society gradually was separated by colonialist powers into single-identity enclaves divided by class, race and religion. This separation, she believes, is one root cause of the terrible and destructive war in Syria. Read more about her talk.

How women win wars: Twelve years ago Julia Bacha observed the valiant actions of young women in the village of Budrus, who stepped up to help save their community from become the site of an Israeli-Palestine separation barrier. This inspired her to investigate the role of women in nonviolent and violent conflicts worldwide. Bacha found that nonviolent campaigns were 100% more likely to succeed than their violent counterparts — and that the greatest indication of whether or not a group would chose to adopt a policy of nonviolence was their ideology toward women in public life. Organizations with women in leadership positions were much more likely to succeed. Our perception of the number of women involved in Middle Eastern conflicts is likely skewed, Bacha says, because the western media underrepresents their extent and importance. The first Palestinian Intifada, she reminds us, featured many women in prominent organizing positions. (The U.S. also erases the women of its own history, like Septima Poinsette Clark of the Civil Rights movement.) Bacha asks us to investigate how our own attitudes towards women will influence the conflicts of the future, their casualties and whether or not they are won. 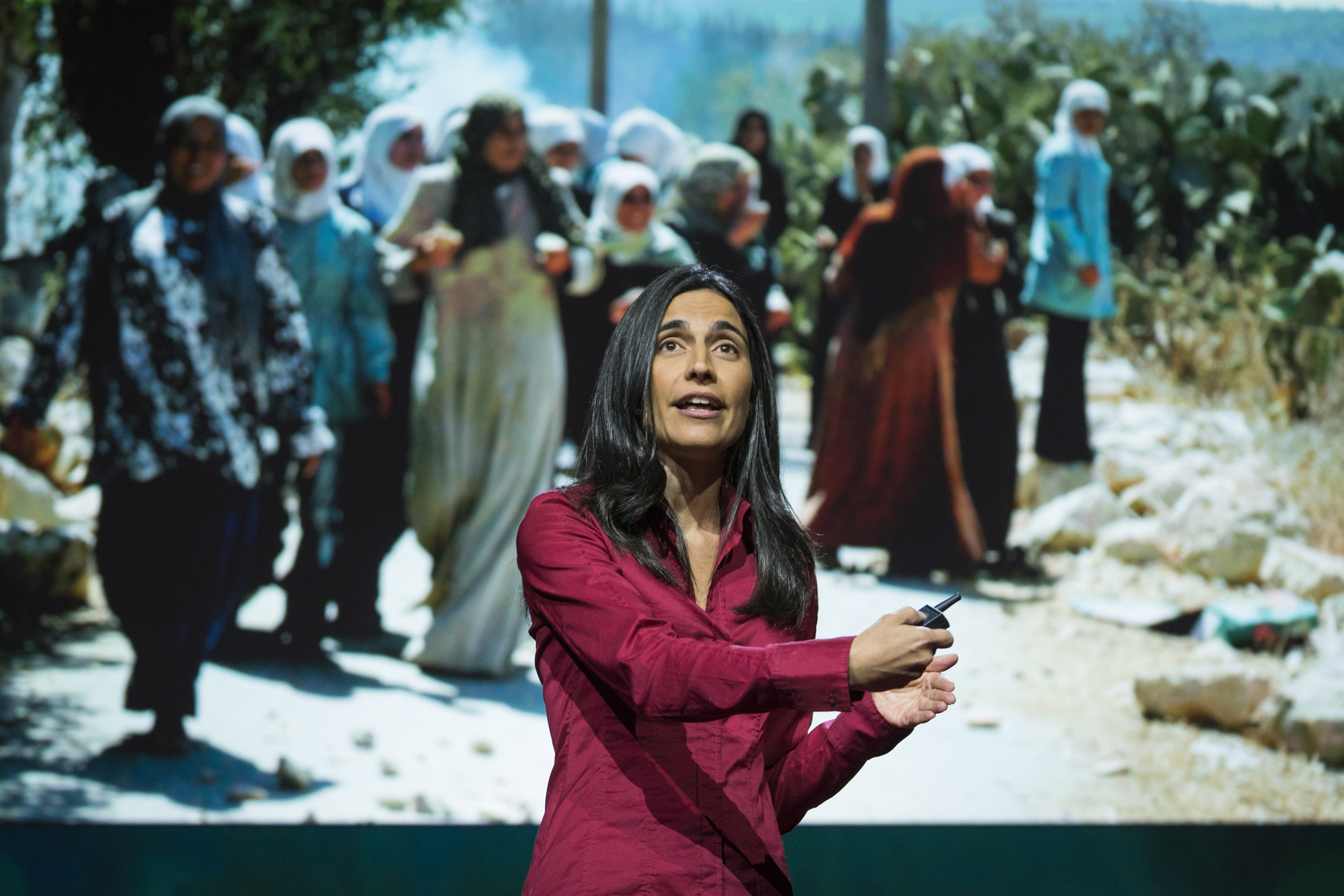 Jazz turned upside down. An impassioned jazz performance to close out Session 3 starts with “Upside Down,” in which pianist Laila Biali plays an upbeat, walk-in-the-park-on-a-sunny-afternoon melody on the piano while singing, “You turn me upside down / when daylight comes / the dreams leave me spellbound.” As drum and a standing bass accompanied, Biali played a faster and faster tempo, exuding joy with each note, building to a time-shifting crescendo. She then transitioned to a slower, more reflective tune, “Joy,” muting the strings and then releasing the power of this rhythmic anthem.