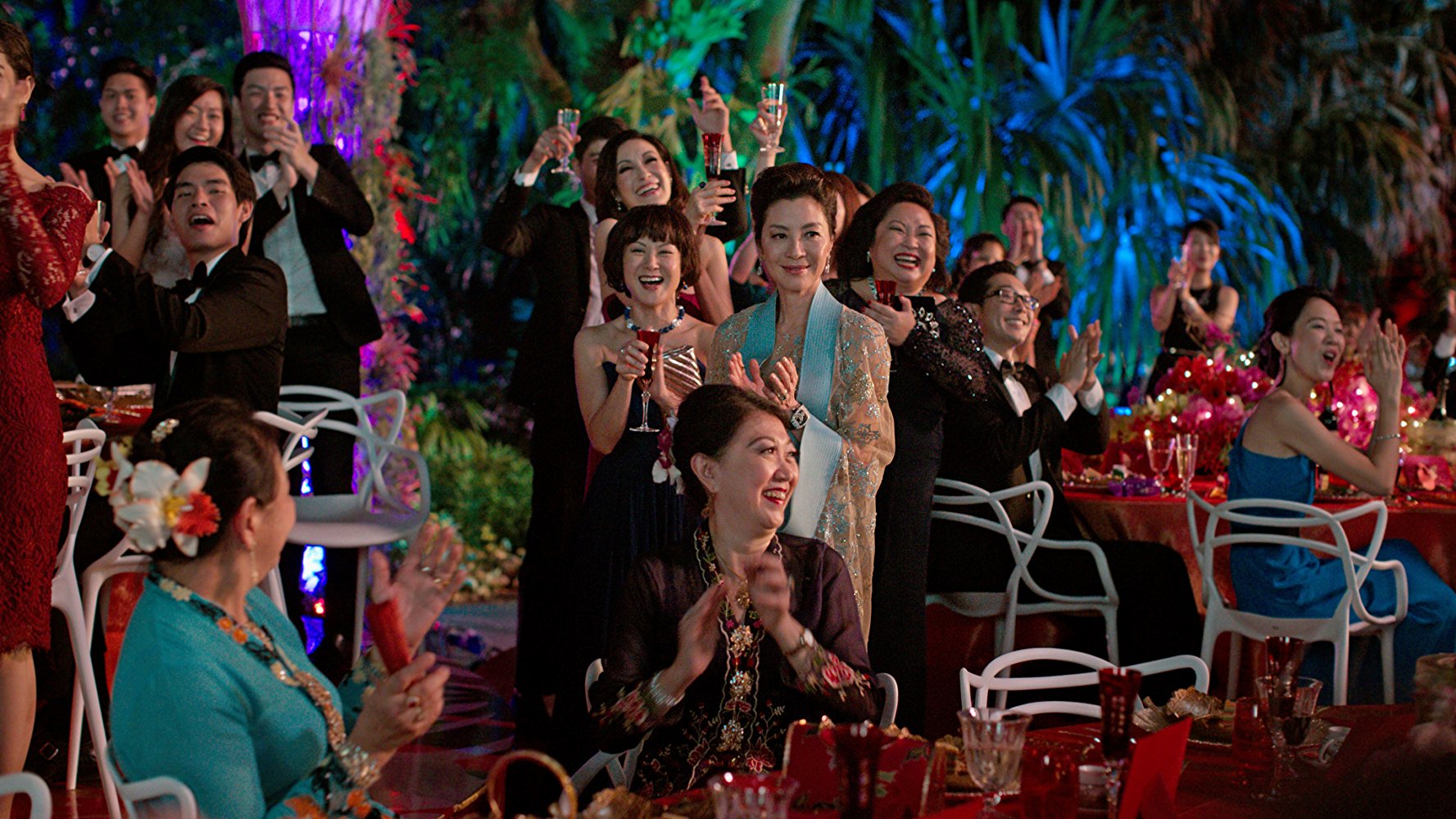 Crazy Rich Asians, a new Hollywood film that is an adaptation of the best-selling book by Kevin Kwan, topped the box office over the weekend, proving the “power of diversity (again).”

The romantic comedy is a major motion picture with big studio backing and a reported budget of $30 million. For Hollywood it also presents something unique: an all-Asian cast. As The New York Times reported last week, “The last time a major Hollywood film set in the present day showcased a majority Asian cast was a whopping 25 years ago, with The Joy Luck Club in 1993.”

NYT writer Robert Ito called Crazy Rich Asians something of a “cinematic Halley’s comet because — before Joy Luck Club, there was The Flower Drum Song in 1961, and then what?”

The film was not only an incredible opportunity for Asian actors, but also for Asian- and Asian-American moviegoers. The filmmaker and Kwan turned down a lucrative deal with Netflix in order to get to the silver screen. “Ultimately, we decided Netflix is probably the future. But right now, it’s not,” director Jon M. Chu told Vanity Fair. “We’re really focused on the financial victory of people showing up so that other voices can be heard and other stories can be told.”

Hollywood has made depressingly little progress

Despite the big opening for Chu’s film, a recent report from Stacy Smith’s research team at the Annenberg Inclusion Initiative, “Inequality in 1,100 Popular Films,” revealed some disappointing data for women and particularly women of color in Hollywood. Of the top 100 films in 2017, two thirds didn’t include a single Asian or Asian-American character. Two-thirds. Among the female leads, only 4 actors out of the 33 films that had female leads weren’t white.

The smaller screen is no better. A recent study by Asian-American Pacific Islander academics found that 64% of television shows do not include one Asian or Asian-American character.

With all the talk in Hollywood of inclusion and diversity, we’d all hoped to see some movement in these numbers over the past few years. But the study reveals just how little top-grossing movies have changed when it comes to the on-screen prevalence and portrayal of females, underrepresented racial/ethnic groups, the LGBT community and individuals with disabilities.

The answer to addressing “on-screen diversity deficits may lie behind the scenes,” Dr. Stacy Smith and her co-authors of the Annenberg report write: “The presence of a female in the directing or writing role is associated with more female characters on screen. The same is true for Black directors and Black characters — particularly Black female characters.”

One woman with power agrees. In the September issue of Vogue, Beyoncé told journalist Clover Hope why she insisted on working with “this brilliant 23-year-old photographer Tyler Mitchell.” At 23, Mitchell is among the youngest photographers to have shot the cover of Vogue. He is also the first African-American photographer to have done it in the magazine’s 125-year history.

“We will all lose” without diversity, Beyoncé says. “If people in powerful positions continue to hire and cast only people who look like them, sound like them, come from the same neighborhoods they grew up in, they will never have a greater understanding of experiences different from their own. They will hire the same models, curate the same art, cast the same actors over and over again, and we will all lose.”

But first we need to get more women and people of color into those powerful positions. The Annenberg report notes that “few women or people of color have worked as directors on the most popular films across more than a decade. Of 2017’s top-grossing film directors, only 7.3% were female, 5.5% were Black, and 3.7% were Asian. Only one woman of color worked on the top movies released last year.”

New projects should make use of inclusion riders.

Dr. Stacy Smith is the founder and director of the Annenberg Inclusion Initiative at the University of Southern California. She and her team have been conducting extensive research on gender equality in entertainment for over a decade. Other organizations, such as the Sundance Institute, the Representation Project, Women in Film, and the Women’s Media Center, also lead initiatives intended to document the diversity gap and to implement programs to close that gap.

In 2014, Stacy wrote an op-ed in The Hollywood Reporter introducing the concept of equity, or inclusion, riders and talked about it in her 2016 TEDWomen talk (watch below). A template of the rider is available at the Annenberg Inclusion Initiative website.

One way to move toward measurable change is for companies to set target inclusion goals. These objectives, which should be transparent and public, should specify not only a company’s expectations for inclusion but also the steps it will take to achieve the goals.

One model for how studios and production companies can activate equilibrium change for inclusion comes from powerhouse producer and director Ava Duvernay. She set a goal that she met: 100% women directors for her TV series, Queen Sugar.

Most of the background speaking roles in film are awarded to men. In order to increase the percentage of women on screen and set a new overall norm for female characters, “directors could add five female speaking characters to every one of the 100 top movies next year.”

Geena Davis, founder of Institute on Gender in Media, lays out the process in two easy steps. Besides speaking roles, she encourages parity in crowd scenes and other scenes involving extras. Although you can’t “snap your fingers and suddenly half the Congress is female,” onscreen it’s much easier, she explains. “In the time it takes to make a movie or create a television show, we can change what the future looks like.”

Lastly, entertainment companies benefit from state tax incentives that subsidize production costs. Earlier this year, Asian-American lawmakers in California pushed through legislation that extended its film and TV tax incentive program and introduced new measures for productions receiving the credit to report on diversity. The Hollywood Reporter notes that even though productions don’t have to meet any quotas to be considered for the credit, the “objective is to motivate change by starting with self-awareness.”

“‘By including reporting on diversity above the line, this bill creates accountability,’ said Dr. Stacy L. Smith. ‘Rather than waiting for reports like mine, content creators have to tabulate their own scores on inclusion, and creating this awareness opens up a space for people to make intentional choices in who is hired, and it forces filmmakers to recognize when they have not made choices toward inclusion.’”

Other states with successful tax incentive programs, such as my home state of Georgia where more films were made last year than in Hollywood and New York, should follow California’s lead and institute inclusion reporting of their own.

Yes, we have a long way to go in getting to gender and racial equality onscreen…to getting closer to the “REEL” world looking like the “real” world, and we can’t wait for the film and TV industry to move in this direction without new strategies and incentives. But another very effective lever for this change is what you and I buy tickets to watch and listen to and what we decide to stream and read. Supporting projects that promote diversity is one very important step in that direction.

Will Crazy Rich Asians be another Halley’s Comet or a new constellation that lights up Hollywood?

As actress Constance Wu tweeted, “I know [Crazy Rich Asians] won’t represent every Asian American. So for those who don’t feel seen, I hope there is a story you find soon that does represent you. I am rooting for you. We’re not all the same, but we all have a story.”

It’s a good time to start telling the untold ones.

TEDWomen, the conference that I am honored and privileged to curate in partnership with the TED team, continues to do our part to equalize with an unparalleled digital platform for women’s ideas and stories.

Join us this year at TEDWomen 2018! The theme is “Showing Up” and you can be sure that we’ll be talking about ideas and strategies for equity in media, business, academia, government and health care. This year the conference will be held in Palm Springs, Calif. from November 28-30.

Registration is filling up fast, so I encourage you to register to join us today!