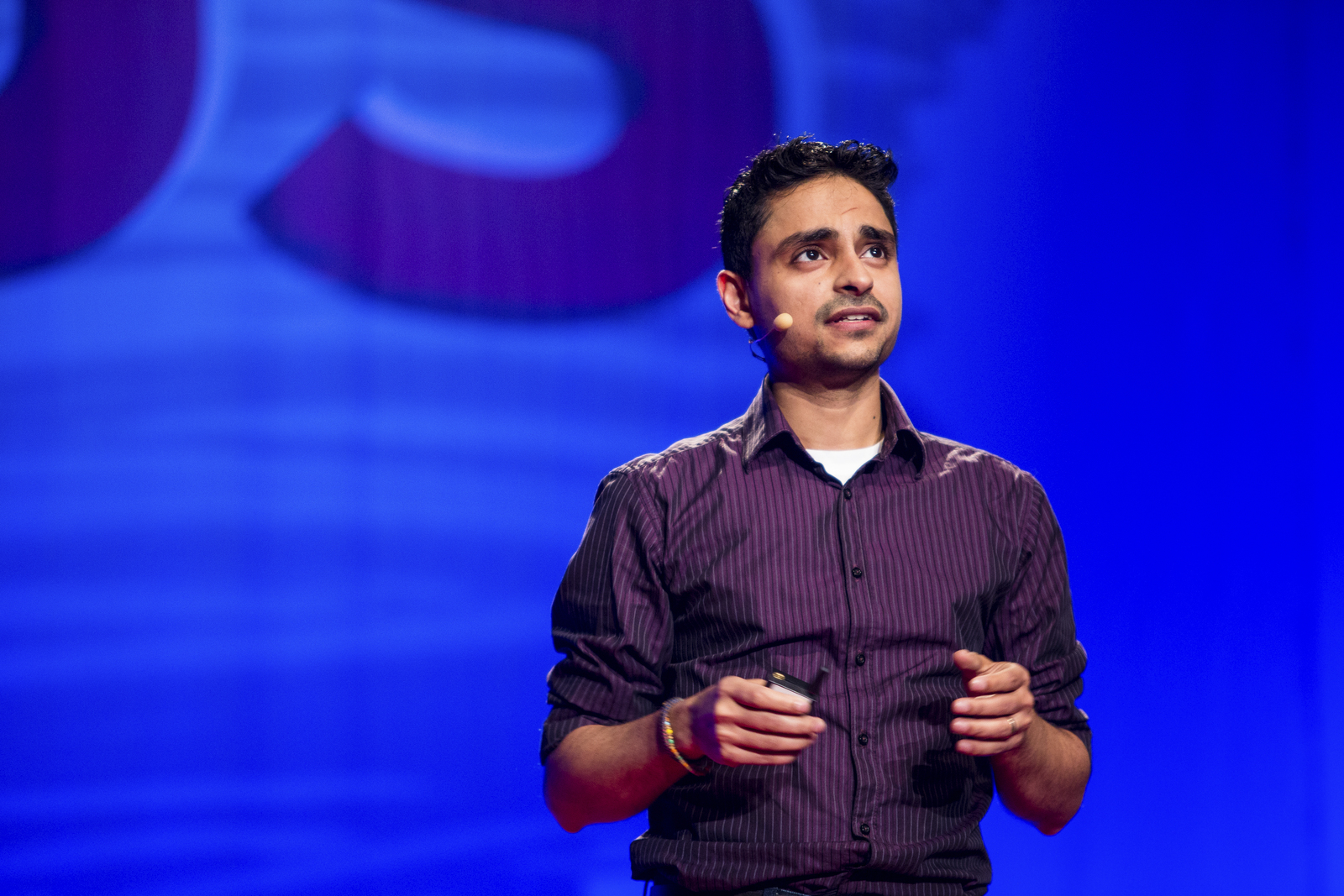 The power of us: Sahil Sethi calls for corporations to participate in helping the United Nations reach their Sustainable Development Goals. Photo: Rich Pizzuti/TED

An idea alone, even when paired with passion, is not enough to change the world. What makes change really lift off and take hold is collaboration — working together to bridge skills and know-how to transform reality. At TED@StateStreet, on Tuesday, Nov. 3, twelve speakers and two performance groups shared how, together, our collective genius is nearly unstoppable.

Themed “The Power of Us,” TED@StateStreet flipped old conventions of tackling the world’s biggest problems by proposing new collaborations across different sectors and industries. Taking place on November 3, 2015, it was hosted by Bryn Freedman, curator of TED Institute, and Rives, a poet and storyteller. Below are some quotes and thought-provoking insights from each session.

“For the climate, history may judge that the banking crisis happened at just the wrong time.”

— How will future generations judge us?  Financial whiz Michael Metcalfe asks: will we do whatever it takes to tackle climate change? The financial crisis of 2009 derailed many countries’ transition to cleaner energy, but he suggests we can now use the power of global funding to reinvest in a greener future.

“If we are the ultimate owners of the capital market, why aren’t we able to make our voices heard?”

— Audrey Choi, a sustainable investment guru from Morgan Stanely, believes that global capital markets can become catalysts for social change.  Since almost half of global capital is owned by individuals, she says,  we can make a difference by investing in companies that champion our social values.

“If we give our children permission to pursue ‘good enough’, we will grow adults who, as the future CEOs and political leaders, are willing to compromise.”

— If you can’t do it absolutely perfectly, why do it at all? “Reformed perfectionist” Charly Haversat challenges our unnerving, ever-expanding obsession with perfection. Can we fight the crippling fear of failure and the unwillingness to compromise it creates?

“While I thought I had control, it was control that had me, dictating my life and my potential.”

— Siawn Ou is a movement enthusiast. As a billiards player and breakdancer, he realized his regimented obsession with control, with technical precision, was limiting his ability to truly enjoy his passions. Ou explores the idea of letting go of control — and suggests that reward outweighs risk in the pursuit of personal expression. 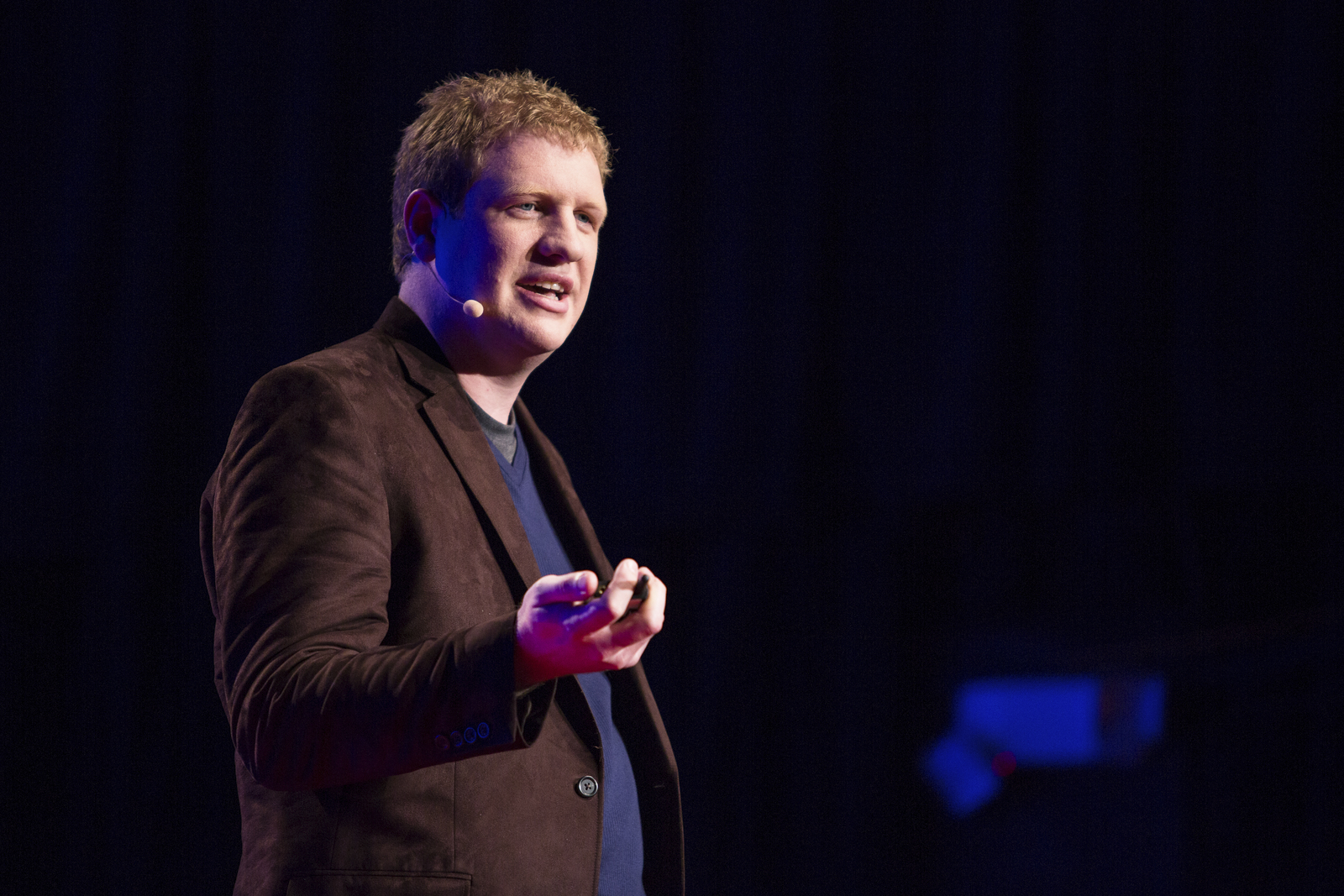 No one has the time to read research papers, Stephen Lawrence, a researcher, admits. At TED@StateStreet, he offers that a mix of machine learning and human insight is the best way to find what you need. Photo: Rich Pizzuti/TED

“How we handle information overload is changing in ways we’re only beginning to grasp.”

— Who actually reads research reports? The truth is, not many people. “Quantextual” researcher Stephen Lawrence found that unless a study has an eye-catching headline, most research reports in the finance industry are rarely given a glance past the abstract on the front page. Lawrence has dedicated his career to making reports more useful, using a sophisticated mixture of machine learning, big data and good old-fashioned human insight.

“Equality is not a women’s problem, it is everyone’s problem.”

— Kirsten Hall has a provocative question: when will it be time to start winding down the idea of corporate women’s groups? Maybe, suggests this young, successful banker, it’s time to stop thinking of women in business as exceptional. 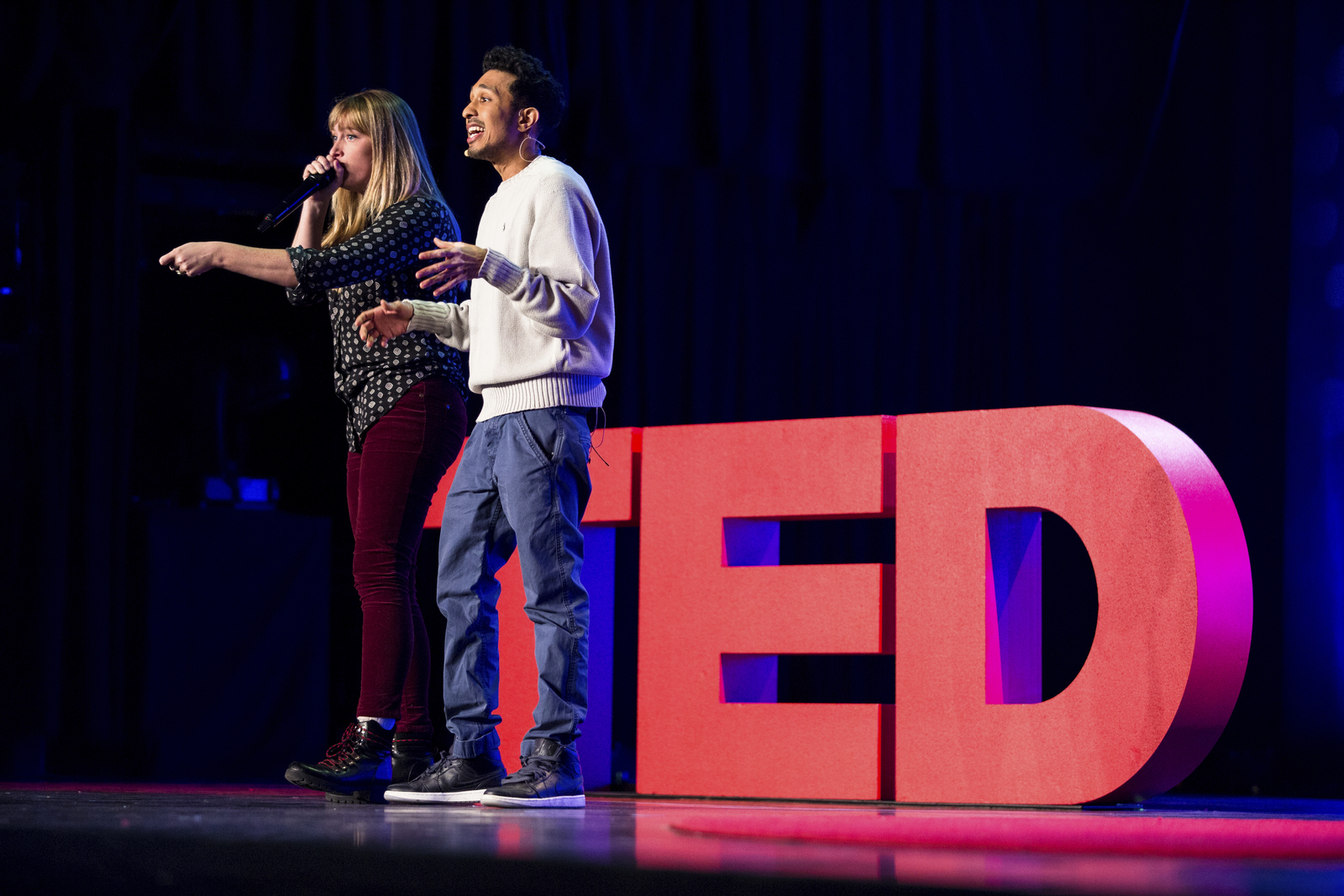 B.E.A.T. NYC shows off their rhyming and beatboxing ability, calling for everyone to embrace art as power. Photo: Rich Pizzuti/TED

B.E.A.T. NYC takes on Boston. Accompanied by offstage rhythmic vocals, a dancer emphatically mimes an employee preparing for a big, stressful presentation. To wind down, he puts on his metaphysical headphones and jams to the grooves of an expert, freewheeling beatboxer who joins him on stage.

“Once you can start becoming more comfortable in your skin, go for it — and try to live in the moment as much as possible.”

— Morgana Bailey returned to the TED@StateStreet stage to introduce a short film about how her life has changed since her big announcement on the same stage last year. Though it took her 16 years to come out, she doesn’t regret what her journey has taught her. Here’s a peek at where her talk has brought her since.

The brothers from down the road. Brothers McCann, a Boston-based folk-rock band, opened with a surprising mix of acoustic instrumentals and funky, soulful vocals. “It would be so good to get together,” they sing. Their follow-up song, a warm, rustic, vocal tune, had an interesting twist, with a viola hooked up to an effects pedal that made it ring like an electric guitar.

Moving on to Session 2:

“Can we ever be in a world free from hunger, free from poverty, free from HIV? … I think there is a sector that has the knowledge, the skills and the financial muscles needed to make these goals a reality … our friend, the corporate sector.”

— A golden chance to make a difference. Conscious capitalist Sahil Sethi has a request for all corporations: pledge 0.7% of their national profits to the United Nations’ Sustainable Development Goals. Together, joined with effort from governments around the world, corporations can make a massive, positive impact on our global community.

“I’m a banker and an English major, and I believe that literature can help us solve many problems in banking and in the world at large.”

— Could Moby Dick prevent the next financial crisis? Suzanne Case, a self-identified “bibliobanker,” believes that literature’s power to foster empathy can change the future of the finance industry. From Moby Dick to the works of Charles Dickens, Case shares examples that encourage us all to be more sensitive to the complexities of the human condition.

“When you find that perfect combination of sounds and the song jumps to life, the satisfaction is immense.”

— How to make your own music. Synthesizers were once the size of entire rooms, but now the power to create your own music can be housed in a laptop. In a demo, James Bickerton shows how music production is not just for pros but for everyday people who want to make the beat drop.

“Lying to oneself is the most universal pattern when it comes to storytelling.”

— Suzanne Duncan is a story skeptic. She explains what happens when our protective imaginations drive a false narrative. Sometimes, she says, the everyday stories we tell ourselves can do more harm than good. 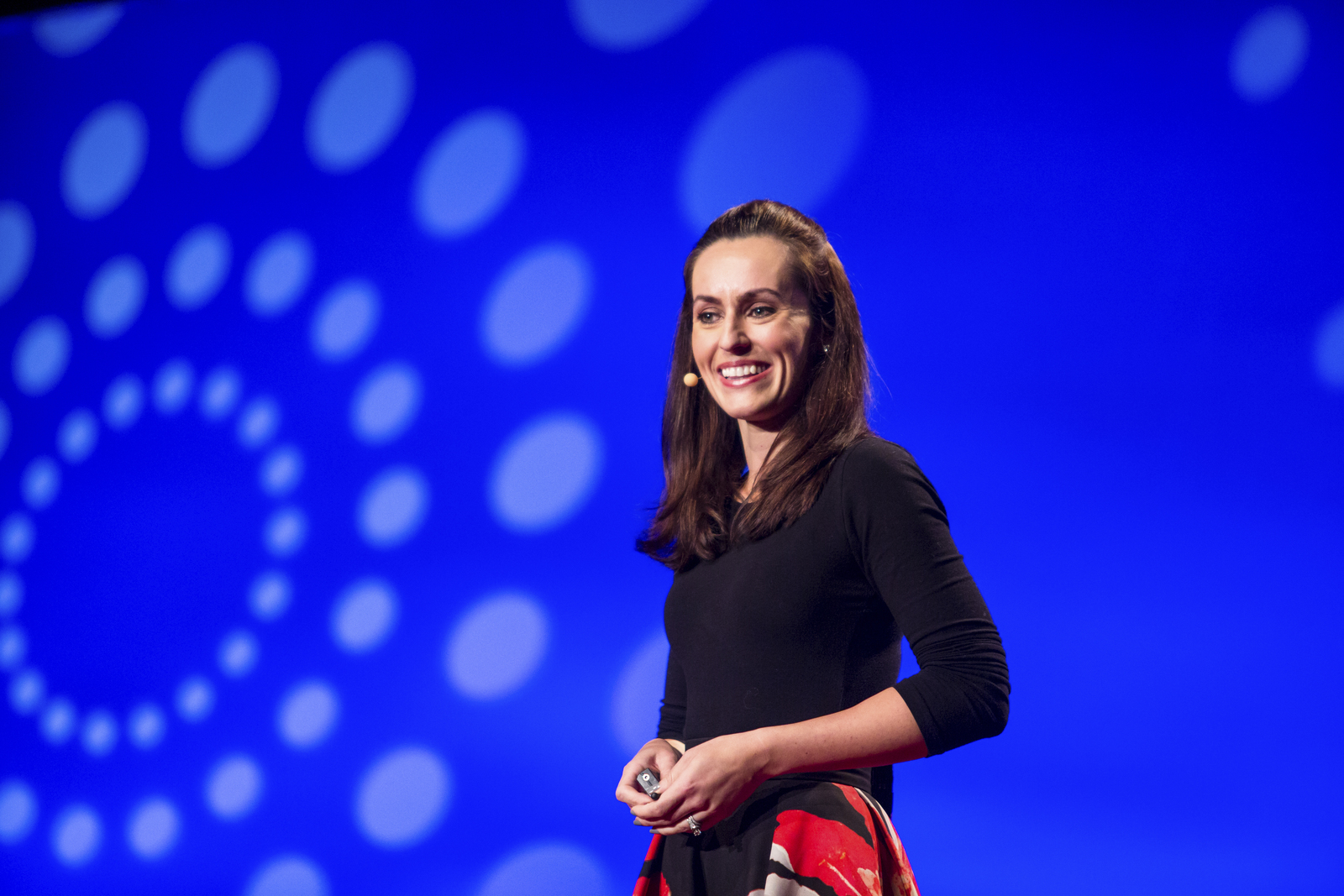 At work, extroverts’ warmth and cheerfulness should not be seen as a mark against their intelligence. Instead, Katherine Lucas explains, workplaces should view these attributes as strengths — not weaknesses. Photo: Rich Pizzuti/TED

“We are automatically assuming that being an extrovert is an asset, when in fact, it’s being evaluated as a liability.”

— Extroverts have it rough in the workplace. Really. Katherine Lucas is an extrovert — but, she found out to her surprise, because of her cheerful smiles and warm approach, others assumed she was less intelligent and even had less seniority. She shows how workplaces can embrace extroverts — both for their ability to thrive in social settings and for the diversity of thought and skills they bring. 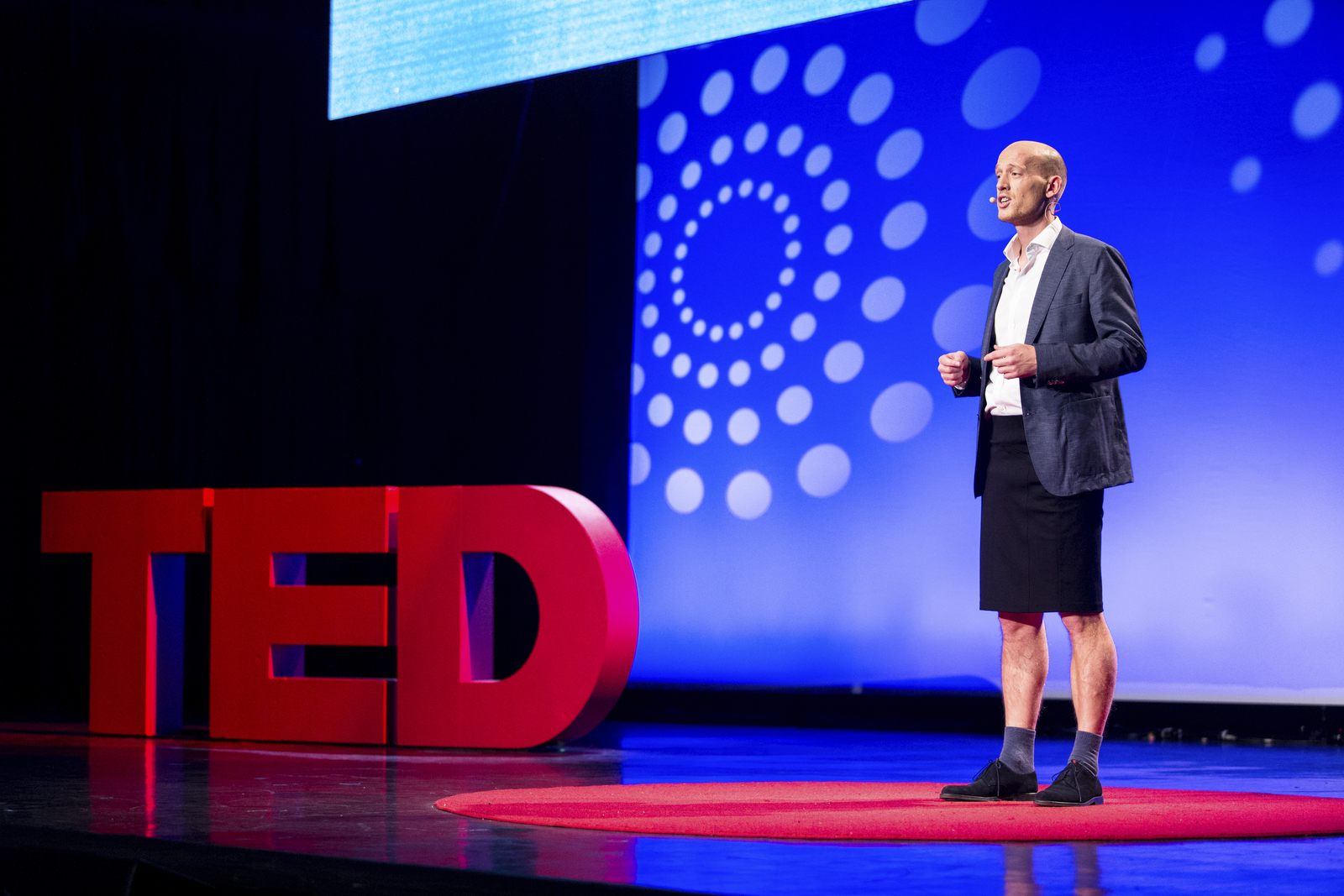 “Shorts are the final frontier of gender equality, and indeed it’s men who have been left standing like dinosaurs in our trousered suits.”

— It’s time for men to “Free the Knee” at work. In the scorching days of summer, why is it acceptable for women’s legs to breathe in professional skirts, while men are confined to long trousers all year round? Through his “Free the Knee” campaign, Chris Vogtherr challenges the notion that shorts are unprofessional.

— To wrap up TED@StateStreet, Rives joined all of the performers onstage, highlighting the day’s events in freestyling verse, “We came, we saw, we probably tweeted. We tried to be perfect, but it wasn’t needed.”

Also, watch this animation, a TED and State Street’s Center for Applied Research collaboration, on how gender folklore affects the workplace — and the case for inclusivity in business.