Bodacious beats: Kenyan musician, producer and DJ, “Blinky Bill” Sellanga simultaneously brought the house down and the TED audience to their feet with a lively, genre-bending musical performance. “My, oh my,” he sings: “What a wonderful feeling.” 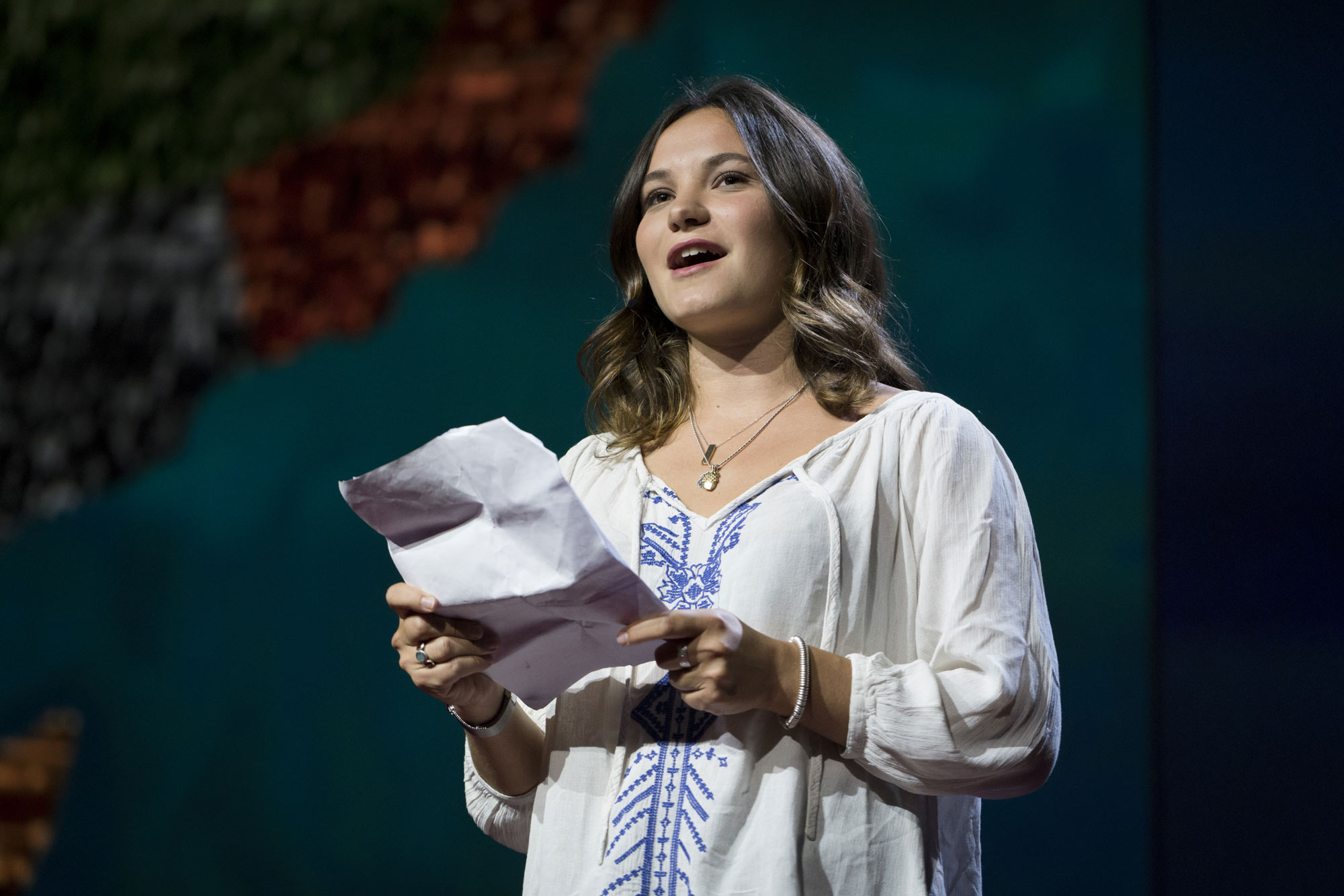 Sexual assault, social media and justice. One night, walking home from London’s Tube, Ione Wells was followed home, grabbed from behind, and an attacker — after smashing her head against the pavement — sexually assaulted her. As she recovered, she wrote a letter to this person, telling them just how deeply he hurt an entire community: “You did not just attack me that night. I’m a daughter, I’m a friend, I’m a sister…all the people who formed these relations to me make up my community and you assaulted every single one of them.” She later published the letter in her school’s newspaper and asked others to reply with their experiences under the #notguilty hashtag. It went viral overnight and became a campaign for empowering the voices of  survivors. But as Wells explained to the  TEDSummit audience, the attention got her thinking about how in the social media age, people leap to react on injustices, creating a spiral of negativity that blocks the voices of survivors themselves. Instead, Wells pleads, let’s take a more considered approach to social media in the wake of injustice. Let’s take the time to listen to those actually affected by it instead of simply creating noise.

How we broke the Panama Papers story. Head of the International Consortium of Journalists, Gerard Ryle, played a central role in the breaking of the Panama Papers. It was his organization that amassed the globe spanning team responsible for combing through 40 years of spread sheets, PDF’s, and emails. Sharing such a massive story went against everything Ryle knew as an investigatory journalist and unsurprisingly the experience led him to adopt a unconventional new outlook. Rather than destroy the medium, he now believes that technology may be the way to finally bring journalism into the truly global age. Read more about Gerard’s talk … 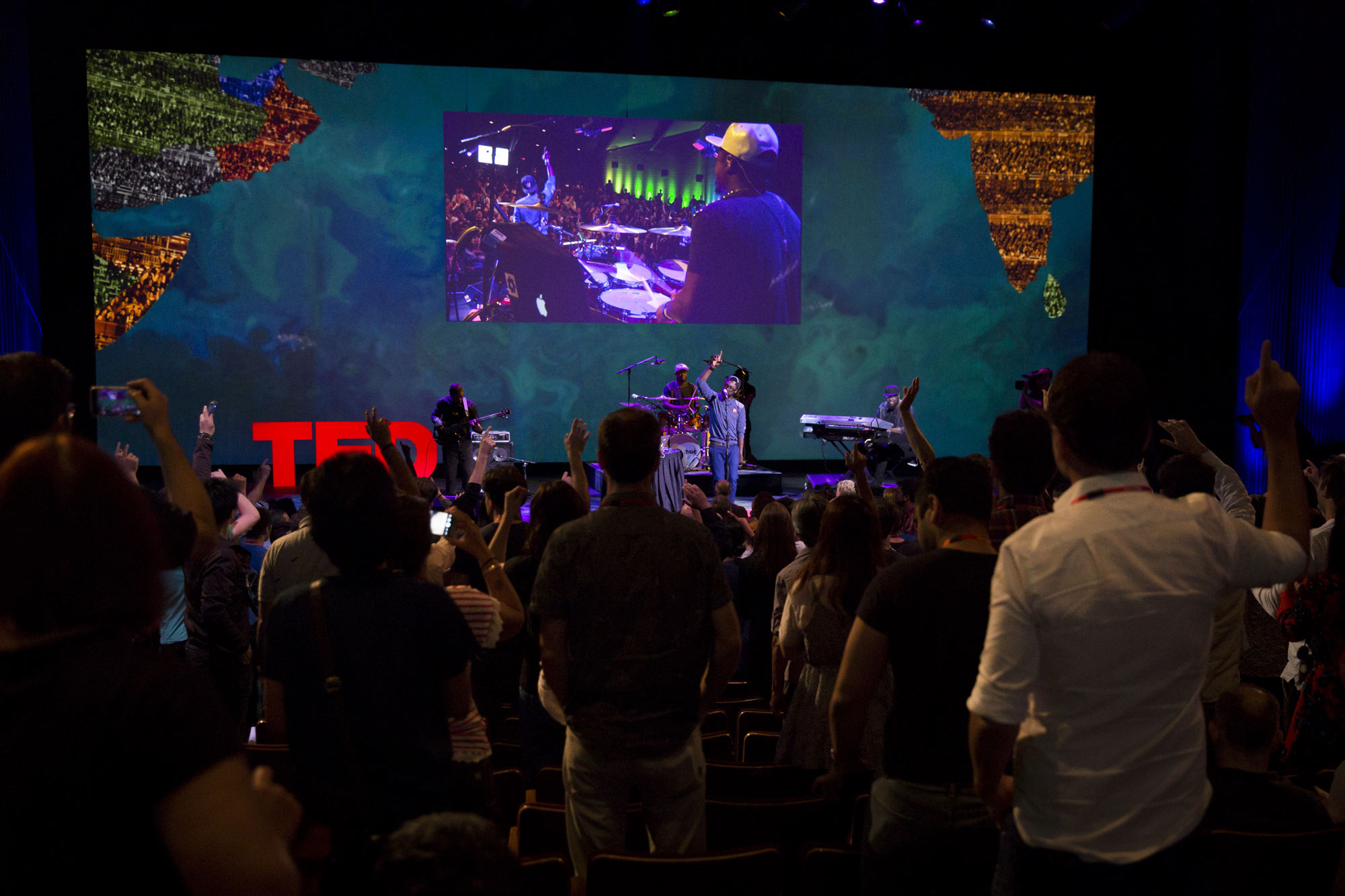 “Blinky Bill” Sellanga rocked the house (and kicked off a conga line at 9:45 in the morning). Photo by Marla Aufmuth/TED.

An approach so transparent, it’s opaque. In June of 2002,  as Hasan Elahi re-entered the US at the airport in Detroit, Michigan, he was stopped at customs and taken to an interrogation room where he was asked, among many other things, if he had any explosives in his storage unit near his home in Florida, and where he was September 12.  Luckily, he was a meticulous calendar keeper and through his Palm Pilot could easily state where he was that day and every day since. Eventually — after six months of questioning back home, Elahi was cleared by the FBI. But he learned something in those months — not to put up a fight over what information to reveal. He told them everything. And then, even when he was cleared, he didn’t stop. It started with emails of travel plans so he wouldn’t get hassled again, but soon he was compiling virtually all possible data on his life and movements — including photos of meals, GPS coordinates and even photos of urinals. There was no datum too small. More than a decade later, Elahi feels that we stress out much too much about surveillance — instead of trying to withhold it, why not open the floodgates? “This is happening, this is not going way, this is the reality we have to live with,” says Elahi, an associate art professor at the University of Maryland and an American citizen. “In a world where surveillance is the norm for many governments and businesses, transparency is resistance.”  Of all the arguments in favor of more openness in the world, Elahi’s is among the cleverest and more thought-provoking.

The paradox of knowledge. Almost 30 years ago, the British-born, Indian-extracted writer Pico Iyer took a trip to Japan and fell in love. He wrote up his enthusiasm and findings about Japanese culture, fashions, customs and architecture in an essay so long no magazine could publish it  — but no matter, as he soon decided to pick up and move to Japan to live, where he has, for 28 years. But while everything he knew about Japan seemed to fill his mind back then — it seems gargantuan with what he feels he knows now. A keen observer of the human spirit and the sometimes-backwards journeys it makes going forward, Iyer professes that today he feels he knows far, far less about Japan — or indeed, about anything — than his 30-year-old self felt he knew. It’s a curious insight about knowledge gained with age: that the more we know, the more we see how little we know. “I don’t believe that ignorance is bliss,” says Iyer. “Knowledge is a priceless gift, but the illusion of knowledge can be more dangerous than ignorance. The one thing I have learned is that transformation comes when I am not in charge, when I don’t what’s coming next. There are certainly some things that we need to know , but there are other things that are better left unexplored.” It may sound like an ironic way to close a conference celebrating the pursuit of knowledge and understanding, but it’s also a lovely reminder that, as Iyer says, “in the end, being human is much more important than being fully in the know.” 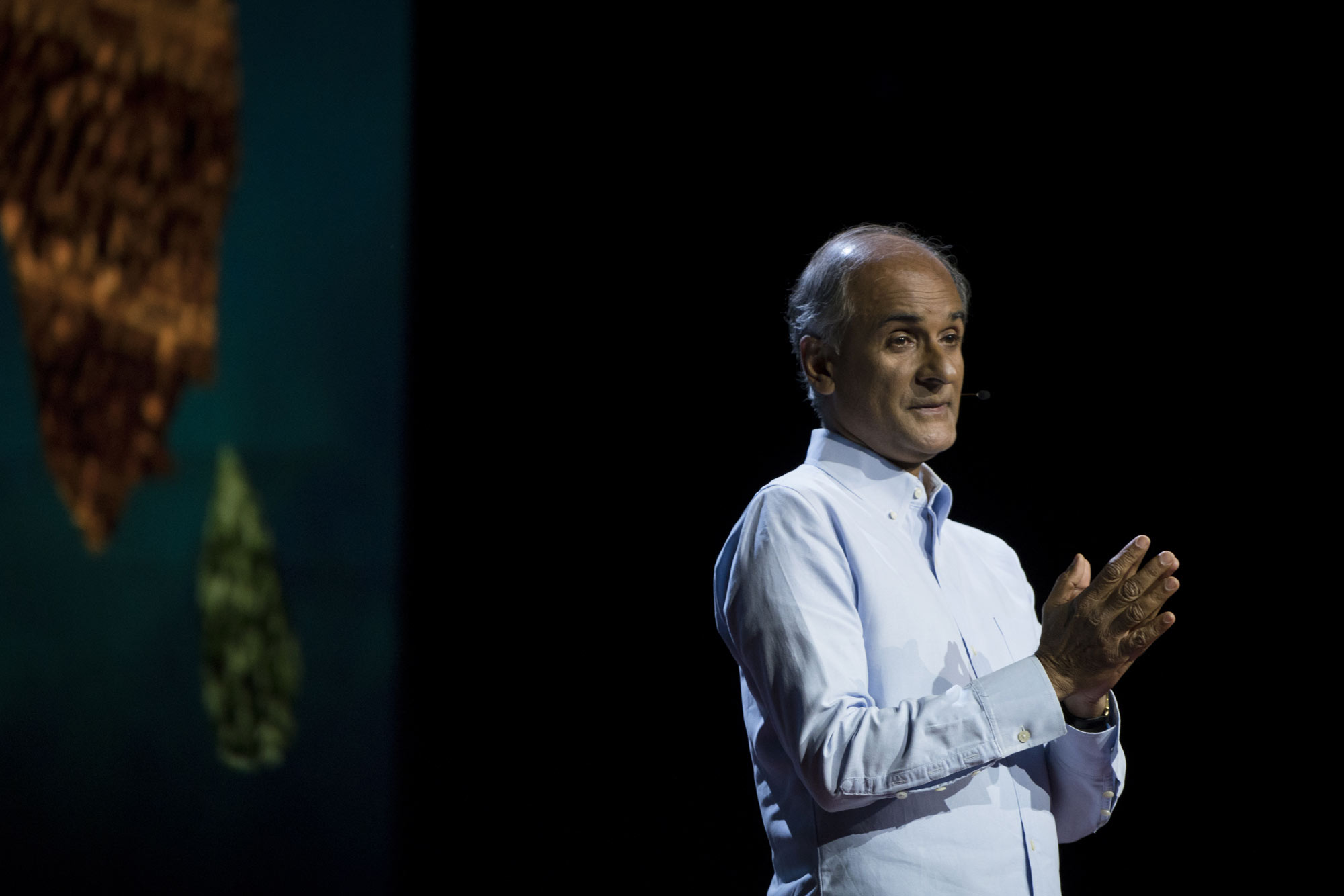 Pico Iyer: “Knowledge is a priceless gift, but the illusion of knowledge can be more dangerous than ignorance.” Photo by Bret Hartman/TED