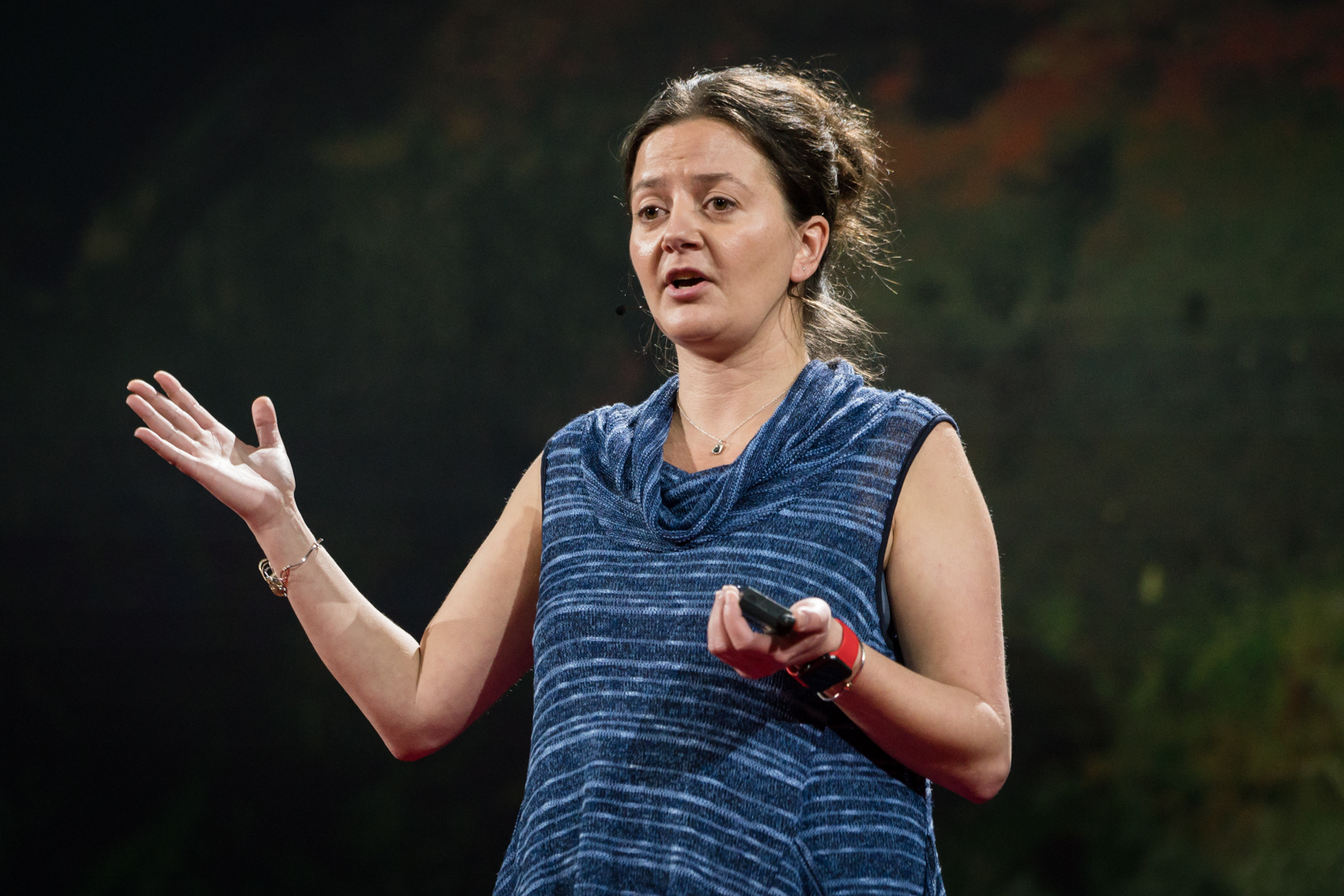 Astronomer Tabetha Boyajian is on the hunt for new planets. As part of that search, she works with a citizen science site, Planet Hunters, to review reams of space telescope data. And what these amateur planet hunters found in the data … is something brand new. Boyajian spoke at TED2016 on Tuesday, February 16, 2016. Photo: Bret Hartman / TED

Exploring space generates tons of data — so much data that most of it is studied using algorithms, not human eyes. But algorithms are not very good at being creative. What happens when we let humans look at data? Sometimes, even amateurs find things that are surprising, remarkable and weird. Astronomer Tabetha Boyajian came to TED2016 with a story about one of those weird things.

The story begins in 2009 with the launch of NASA’s Kepler mission. Kepler’s scientific objective was to find planets outside our solar system, and it carried out this mission by observing and capturing data about a specific field of the sky inhabited by 150,000 stars.

Kepler was looking for transits, which occur when a planet’s orbit is aligned with our line of sight and can be seen passing in front of a star, causing a momentary dimming in the star’s light.

The NASA team developed sophisticated algorithms to search the data for transits. “At the time of the data release,” Boyajian says, “astronomers at Yale were wondering: What if computers missed something?”

This led to the launch of a citizen science project called Planet Hunters. The goal: To have people look at the same data and use the human brain’s amazing capability for pattern recognition to find transits.

Some experts doubted that humans could pick up signals in the data that computers would miss. But today, thanks to more than 300,000 science enthusiasts, Planet Hunters has found dozens of new planets, including one of the biggest mysteries in the galaxy: A star known as KIC 8462852, which resides in the constellation Cygnus, about 1,500 light years from earth.

Data collected from a normal transiting planet shows a smooth drop in the star’s brightness, usually lasting for a couple of hours. Even the biggest planets, such as Jupiter, cause no more than a 1 percent drop in its star’s brightness.

But four years ago, citizen scientists on Planet Hunters spotted a mysterious signal from KIC 8462852. Data showed a transit of the star that lasted almost a week. And the transit was asymmetric — instead of having a clean, U-shaped transit, it had a strangely sloped transit pattern.

“This seemed to indicate that whatever was blocking the starlight was not circular, like a planet,” Boyajian says.

Astronomers kept their eye on the planet, and in March 2011, something weird happened. Light from KIC 8462852 dropped 15 percent — huge compared to the drop caused by even the biggest planets. The feature causing the dimming appeared to be clean and sharp.

Two years goes by without much action — until February 2013, when things start to get really crazy.

For about 100 days, light from KIC 8462852’s star shows a huge complex of many dips. These dips have variable shapes: Some are sharp, and some are broad. Some last for days, and some last for more than a week.

And at one point, the star’s brightness dropped by more than 22 percent. “This means that whatever is blocking its light has an area over 1,000 times the area of our planet Earth,” Boyajian says. “This is truly remarkable.”

Scientists had the initial reaction you might expect — they thought something was wrong with the data. But upon further inspection, they found that the data was good. Something in space was blocking the starlight.

“At this point, we set out to learn everything we could about the star to see if we could find any clues to what was going on,” Boyajian says.

The brainstorming had begun.

One theory held that the star was very young and still surrounded by the material that formed it. Another person suggested that the star had formed planets, and that those planets had collided and produced debris. Both theories explained part of the data, but the star showed no signs of being young, and the characteristic glow of a planet-smashing event was absent.

Another theory asked: What if a huge swarm of giant comets was passing by the star in an elliptical orbit?

“This is actually consistent with our observations,” Boyajian says, “but it does feel a little contrived.” It would take hundreds of comets to produce the observed data — and that’s just the comets that happen to pass in between us and the star. In reality, this explanation would require thousands, even tens of thousands of comets.

“Of all the bad ideas we had, this one was the best,” Boyajian says. “So we went ahead and published our findings.”

It was one of the hardest papers Boyajian ever had to write. As a scientist, she was trained to publish results, and this was far from that. So she decided to give the paper a catchy title: “Where’s the flux?”

Around the time she was writing the paper, Boyajian’s colleague Jason Wright was also writing about Kepler data, and he noted to Boyajian that Kepler’s extreme precision could have detected alien megastructures — but it hadn’t.

This got Boyajian thinking outside the box. “We had to find a way to rule out aliens,” she says.

Teaming up with a colleague at the SETI Institute (SETI stands for “search for extraterrestrial intelligence”), Boyajian wrote a proposal to observe the star with one of the world’s largest radio telescopes, the Green Bank Telescope in West Virginia.

A month later, news of this proposal got leaked to the press. It’s so far inspired more than 10,000 articles and counting.

So how would the presence of aliens help explain the light curve?

“Imagine a civilization that’s much more advanced than our own,” Boyajian says. “In this hypothetical circumstance, this civilization would have exhausted the energy supply of their home planet.” To meet their energy demands, they would have to capture more of their host star’s energy. One way to do this would be to build giant structures to orbit their star that could capture energy like solar panels.

These megastructures, known as Dyson spheres (they were proposed by physicist Freeman Dyson), would have to be truly monumental in size. The simplest elements of a Dyson sphere orbiting KIC 8462852 would be 100 times larger than the distance between the Earth and the moon.

One of these structures in motion around the central star would produce anomalies in the data, such as unnatural looking, uneven dips.

Of course, there are doubts about this explanation.

Even alien megastructures cannot defy the laws of physics, and anything that uses energy will produce heat and glow in the infrared. And we don’t observe this coming from KIC 8462852.

“We’re in a situation that could unfold to be a natural phenomenon we don’t understand or an alien technology we don’t understand,” Boyajian says. “What’s amazing to me is that this star would have never been found by computers, because we just weren’t looking for something like this.”

Even more exciting: There are more missions and more data to come.